Biba was a London icon.

Biba epitomised the swinging 60s & 70s in London. Before then, as founder Barbara Hulanicki said, “In England, we were thought to be the worst-dressed people in Europe”. Biba was a fashion label, a shop, a feeling & a mood. It perfectly encapsulated the mood of the time.

It started humbly in the early 60s as a mail-order catalogue, offering inexpensive clothes to young women. Their first success was a pink gingham dress, which was advertised in the Daily Mirror. A similar dress had recently been worn by sex-bomb Brigitte Bardot, & the day after the ad ran in the paper, Biba received over 4000 orders. (They ultimately sold 17,000 of the style.)

From there, Biba opened their first boutique. Situated on Abingdon Street in Kensington, the doors swung open at 10am in the morning. The entire store had only ONE dress in it–a brown, pinstripe dress–in one size, & yet the shop was immediately packed with girls trying them on. No one asked if there was another colour or style. Biba had sold every dress in the shop by 11am!

Biba was really the start of high street fashion in the United Kingdom. They turned designs around quickly–you could see a dress on television on Friday, & buy it at Biba on Saturday. They also strived to be affordable. The idea was that the average girl could spend less than 10% of her weekly earnings & get a cute outfit. 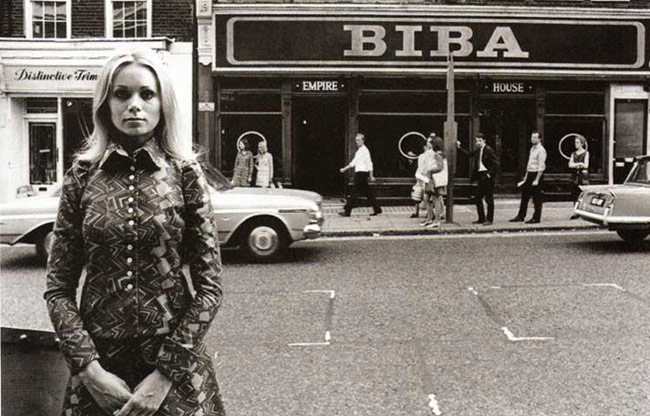 You’ve got the look!

The Biba–or “Dudu”– look was very well-defined. The dresses came in “Auntie colours”–mostly dark autumnal shades, like burgundy, deep blue, rusty orange & plum. The dresses were also apparently extremely itchy & designed in such a way that you could barely bend your arms, but this did absolutely nothing to stop people from buying them!

There were lots of stripes, jumpsuits, flared pants, big hats & platform shoes. There were tie-dyed t-shirts & feather boas. It was glamorous & excessive, opulent & decadent. It was mysterious, sexy & fun.

Biba was also the first label to bring miniskirts to the high street, even though Mary Quant had been the first British designer to show them. They caused a stir in London. Barbara Hulanicki was quoted as saying, “I thought surely we couldn’t shorten them any more, but magically there were a few old inches to go!” 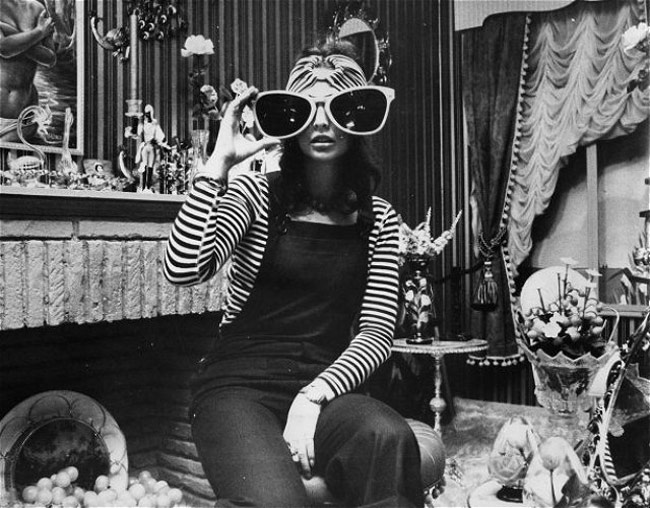 Who was the Biba girl?

“Postwar babies who had been deprived of nourishing protein in childhood and grew up into beautiful skinny people: a designer’s dream. It didn’t take much for them to look outstanding… Fresh little foals with long legs, bright faces and round dolly eyes.” — Barbara Hulanicki

The demographic was very young, too, mostly teenagers & girls in their early twenties. Even Anna Wintour–later to become the editor of American Vogue–snagged a job at Biba when she was 15 years old, just one year after first getting her iconic bob haircut! Apparently, being 30 years old in a Biba store would have you feeling like a fossil in no time… ! 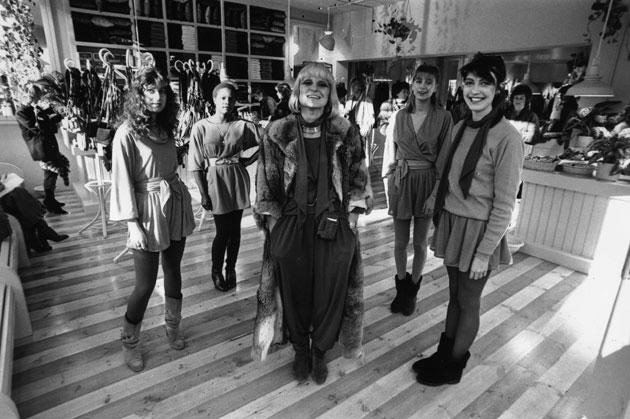 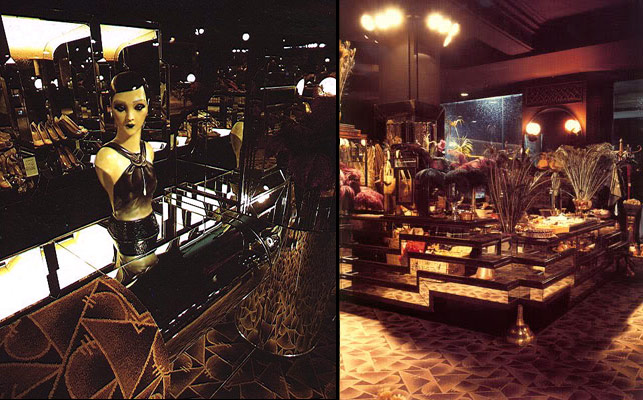 In 1974, Biba moved into a seven-storey department store. It was called Big Biba, & it attracted up to a million customers a week. For any girl visiting London, it was a must-see.

Big Biba wasn’t just a shop–it was an experience. Nor did they only sell clothes. Oh no! At Big Biba, you could buy Biba washing liquid, a Biba sofa & Biba eyelashes, as well as a pair of Biba platforms to walk home in. You could eat Biba camembert cheese in the food hall, browse Biba-esque art in their gallery & buy books in the Biba bookstore.

It was about total immersion. You could literally live Biba… & many did!

There was even the Rainbow Room on the fifth floor, a restaurant, destination & hang-out for rock stars like Mick Jagger, Marianne Faithfull & David Bowie. The best thing about it was that despite the store’s fame, it remained accessible. Anyone could go to the Rainbow Room & eat sandwiches among the pink flamingoes, & if you caught a glimpse of someone famous, so much the better! 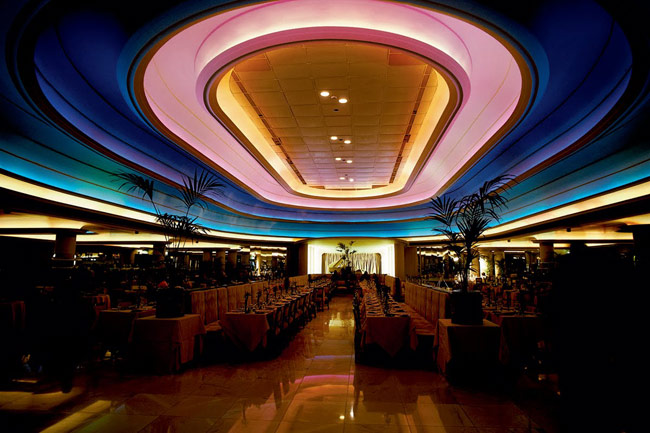 Biba was one of the first stores to really brand itself head-to-toe, blazing the trail for thousands of other companies. The Biba logo, in gold & black with art deco flourishes, was all over everything. They had a Logo Store within Big Biba, where you could buy small items & trinkets, like playing cards, emblazoned with the Biba emblem. There was even Biba logo wallpaper for the true fans!

The front windows of the store were blacked-out so that the shop stayed dimly lit inside, with the idea that a black window was so compelling that it would draw people inside. (This turned out to be true!)

There were no standard racks of clothing, either. Dresses, shirts & skirts were hung on old coat-stands, which were placed all around the shop. The sales assistants were forbidden to approach customers or to utter the words, “May I help you?”, & the music was always turned up full-blast!

Freddie Mercury hung out there, while Lou Reed wore Biba black nailpolish & the New York Dolls played two nights at the Rainbow Restaurant. Biba was definitely the place to go if you wanted a big spoonful of rock & roll attitude. 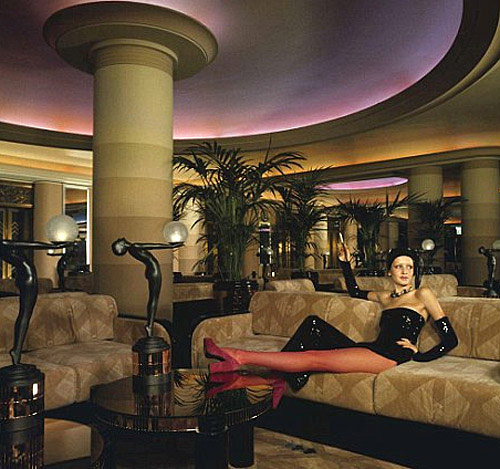 This is the end, my friend…

Biba closed down in 1975, after having to sell itself to a big corporate conglomerate to stay afloat. It turns out that Big Biba was also a big responsibility, one that overwhelmed Barbara Hulanicki & her husband. Barbara Hulanicki said, “Every time I went into the shop, I was afraid it would be for the last time.” Eventually, she was right.

While news of the closure broke the hearts of stylish girls all over the world, in retrospect, it was almost a good thing. Better to go out in a blaze of glory, at the peak of your popularity, than to get old, tired & watered-down, don’t you think?

Since then, Biba has had several relaunches. All have flopped. The most recent has been the revamping of Biba by House of Fraser, who chose Daisy Lowe as its poster girl, & for whom Biba has been successful.

Barbara Hulanicki is unimpressed, & says that the idea of Biba was always to keep prices low (the new Biba is very expensive). She has designed capsule collections for Top Shop, & recently signed a deal with Asda to produce several collections of clothing which will retail for between £11-18.

“Biba fulfilled the rock & roll promise to live fast, die young, & leave a beautiful corpse, & is consequently remembered with a fondness almost unique in the world of retail.” — Alwyn Turner 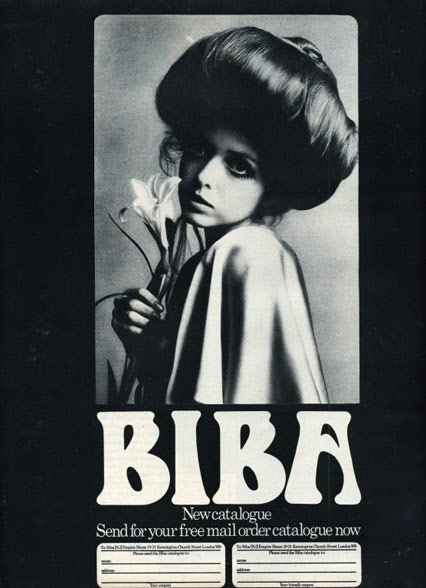 I love reading these old stories about people’s Biba experiences.

“I was a very hard up student nurse in London, myself and my friend Judy used up our hard earned pay(which should have been spent on food) on a shopping expedition to BIBA and purchased amazing suede platforms, mine were green and yellow, Judy’s were lilac and aubergine. We tottered next day at the School of Nursing to be greeted by an incredulous tutor, we had to hold each other up but felt fab.”

There are more beautiful pictures & information here: Inside the most beautiful store in the world; Biba’s everlasting appeal; Biba savoir faire on the high street. 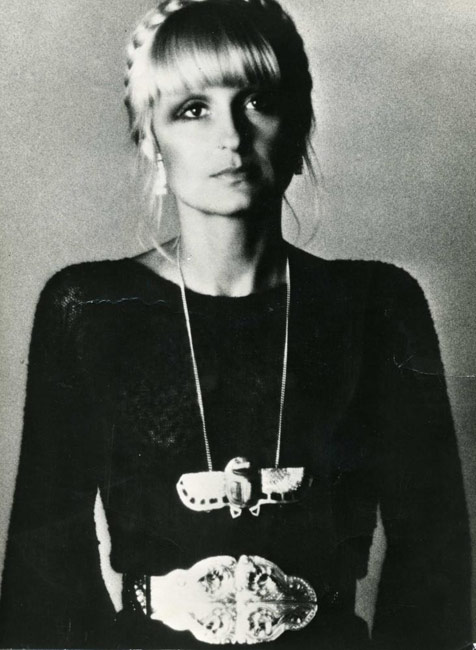 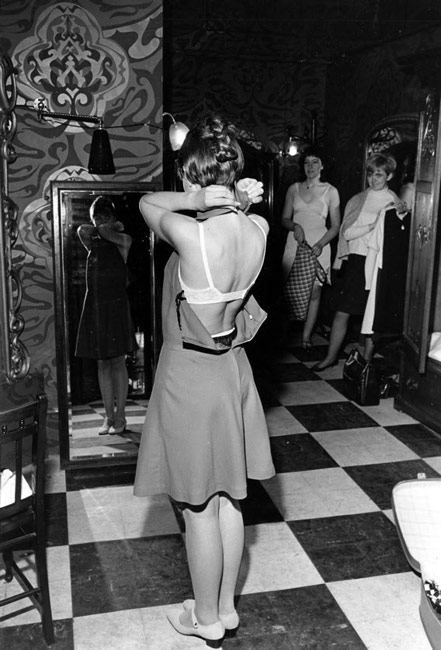 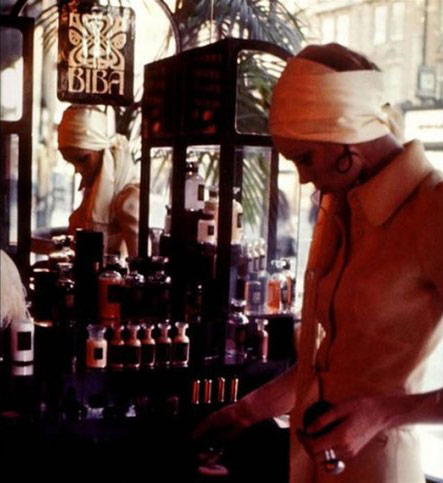 A cosmetics display within Biba. 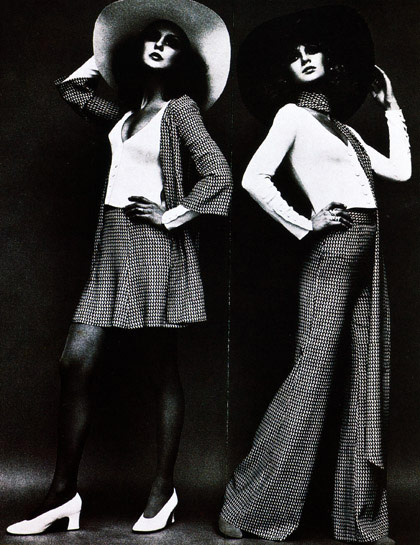 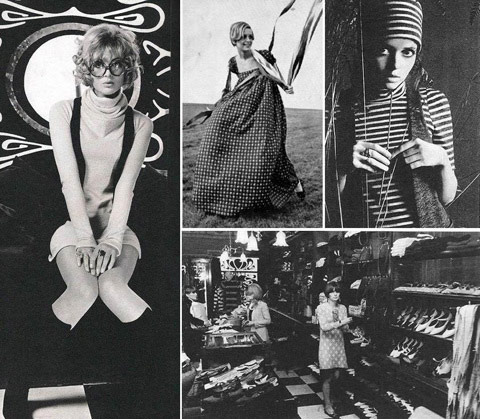