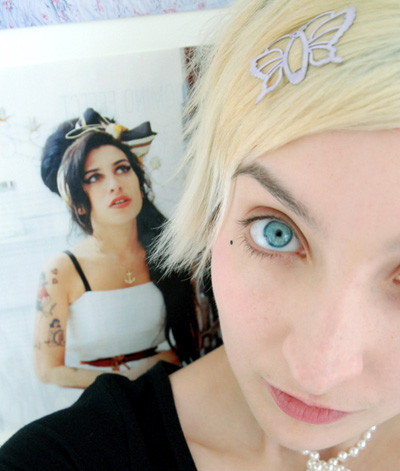 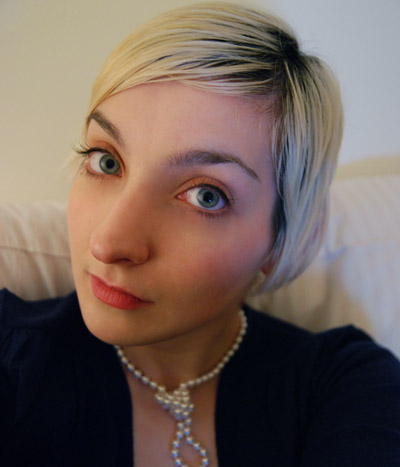 After. Just call me Bambi.

I had heard about eyelash extensions but never really considered getting any myself. To me, they seemed to fall into the realm of those women who require excessive upkeep, & that has never really been my thing! However, when I received an email from Pascaline of Lady Cil inviting me to try a set, I jumped at the opportunity. Seriously, who doesn’t secretly want to look a little bit more like Bambi?!

It was very exciting because I have never even worn false eyelashes before. I was an eyelash treatment virgin! I have attempted to stick falsies on before, but god they look awful, it’s a very drag queen-esque scenario.

A day later, I was on the way to undergo my transformation. Pascaline is adorable, a very sweet woman with a lilting French accent who can definitely be trusted to look after you & put you at ease. I lay down on the massage bed (complete with yellow angora blanket) & closed my eyes.

Pascaline applied a cooling pad to my eyes, which also had the advantage of sticking down all my lower lashes so they wouldn’t get in the way. Then I… well, I did nothing. I lay there with my eyes closed as we listened to French music & Nina Simone, talking a little bit but mostly just relaxing. There were tweezers & glue & a strange device which puffs air (to dry the glue) whizzing around above my head, but for the most part, I was blissfully unaware!

The eyelash extension process is very labour-intensive, because when you apply an extra eyelash, it needs to stick to one which is mature, but not too much — otherwise, if it’s too mature it might fall out quickly, & if it’s not mature enough it may not have the strength to hold an extra one. That’s part of why it takes so long. My session lasted about two & a half hours, but when you consider that there is one woman individually attaching 45 new eyelashes PER EYE, it makes sense.

The end result AMAZED me. Pascaline uses thick black lashes which create a very obvious, but still subtle, effect. I was so thrilled when I looked in the mirror, my lashes were long & thick & gorgeous. The best thing is that I don’t need to wear eye makeup at all, in fact it almost looks excessive — which also means that I wake up looking amazing! It’s SO GOOD!

The cost of an initial treatment is $200 for a set, but after that, refills are only $40 & they only need to be done every 3 weeks or so. $200 is, admittedly, quite expensive, but I believe it is absolutely worth it… & think of all the money you’ll save on mascara! However, I have GOOD NEWS! Pascaline has offered to do a “Gala special“, which is 30 eyelashes (instead of 45) for $150, with a FREE refill included. How awesome is that?!

A couple of my eyelashes have fallen out so far, & I had it done 3 days ago, but they still look excellent & that’s just the way eyelashes are — they fall out! Plus, that’s what refills are for…

The website warns that it is an addictive procedure & oh my god, IT IS, I am obsessed. I feel so glamorous, but quite frankly, the photographs speak for themselves. I am not wearing ANY makeup in these shots, I took them just after I got out of bed! 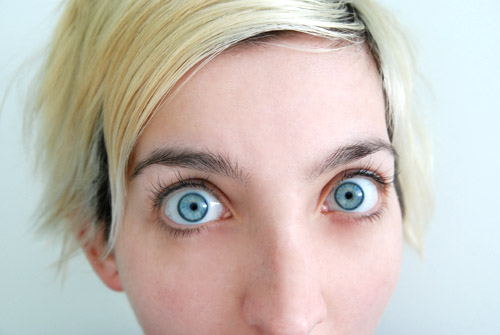 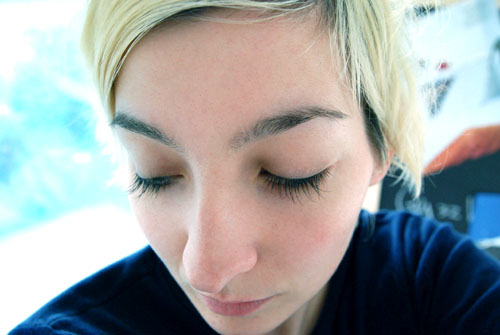 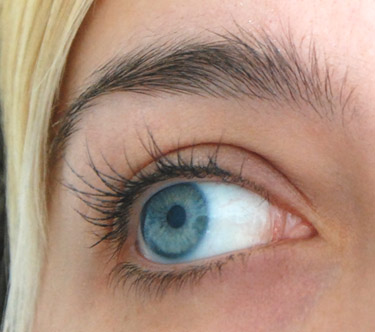 Man, I love these eyelashes so much. If you’re in Melbourne, definitely check out Lady Cil & if you have any questions or queries, get in touch with Pascaline. She is so adorable & I’m sure she would love to hear from you!

Okay, I’m going to go & bat my eyelashes in a winsome manner now…

Note: In the interests of full disclosure, you should know that I received my set of eyelashes in exchange for a fair, honest review of the service. I believe that my honesty & integrity are of utmost importance, & I am never going to falsely hype up something that I don’t really love. I haven’t omitted any information at all — I would consider that a disservice to you, my readers, who I am crazy about! Pascaline knew this was a chance she took at the time, but thankfully, I adore her work — & you will too!

« Tipple Of Choice?
Living It Up At Burning Man »

Last night (at the Red Door Burlesque — yes, for the second time), I discovered my “new drink”. It’s been months since I really had a drink, I just don’t do it much anymore. But last night I drank violette liqueur over ice & it was AMAZING. A beautiful, rich purple colour with the taste […]

My exceptionally stylish friend Ana is staying with me for a week! Here’s what we wore to the markets today… For outside. Ana is wearing… Mayfair jacket (by her) Poise bolero jacket (by her) Sunglasses White scarf Nigh Nigh camisole (by her) Gabrielle culottes (by her) Pair of braces worn as a belt Gloves worn […]

Shirt from Cue Blue cardigan by Country Road Olive shorts from Workshop Large fishnet stockings New Rock platforms A rejected outfit from yesterday. It looked cute but my New Rock platforms took an absolute pounding when I was in Wellington & they need to be glued. Boo. I didn’t want to wear them out in […]

I Was A Teenage Goth

What were you like as a teenager? I was a teenage goth. I blame the internet almost entirely. For Christmas in 1996, at age 13, I received an internet-capable computer. I started off using Microsoft Comic Chat (ugh!) & quickly moved on to IRC where I would fritter the hours debating the finer points of… […]

No eye makeup today. I am about to go on an adventure! (You will hear all about it soon.) Pearl choker New dress from Starfish White stockings Weird flat black shoes

“As one who travels and lives far from home, I thought you might have some advice about my situation. I am about to go away to a college which is a 9 to 10 hour drive from home. Although I am not the type to be homesick, I find that I’m uneasy about the concept […]

Not so glamorous. My yoga outfit. New, enormous, supremely-warm & happy-making cardigan from Country Road — I think I will probably wear this all winter with a pair of leggings, so let this be a warning to you! Sass + Bide t-shirt. This came free with Harper’s Bazaar (& not a bad issue either, actually, […]

Angelica’s unbirthday celebration! “Hi! I’m Angelica from El Salvador, I’m 21, and I dont know if its too late for the pictures of my i.d.u.d, but until today i’ve got the pictures. And…maybe my english its not very good…sorry. Ok, so maybe my saturday wasn’t so glamorous like the others because in all my satuday […]