I’m almost at the end of my sublease in New York — my fourth one! (How is this possible?!) & as it draws to a close, I’m starting to think about what it would be like to have more permanent digs. Oh, permanent digs. The thought makes me salivate. When you’re used to living out of suitcases, the concept seems like a mystical fairytale. Even when you manage to unpack your things, which I have to do or I go crazy, your suitcases are still lined up in the hallway, knowing that soon enough, everything’s going to have to go back inside them, & it’s on the road again.

The next month is going to contain much more travel than could be considered reasonable, but when I get back, things are going to be different… because I’m going to get my own place. No more living in someone else’s home. No more mixing my things in with the owner’s belongings. No more of that constant, lingering knowledge that I soon have to pack up & go.

So I’ve been thinking about how I want it to look. This is somewhat compounded by the fact that Nubby’s in town, & we talk about aesthetics with obsessive fervour. I’ve also been strongly influenced by this incredible store in Williamsburg called The Future Perfect, which sells the most incredible, rad & fun home furnishings ever — & I recently discovered The Ace Hotel, whose interior design is SO in line with my own style it kind of scares me!

Here are some pieces I’ve found, pictures that are inspiring me & thoughts on how I’d like my ideal home to look… 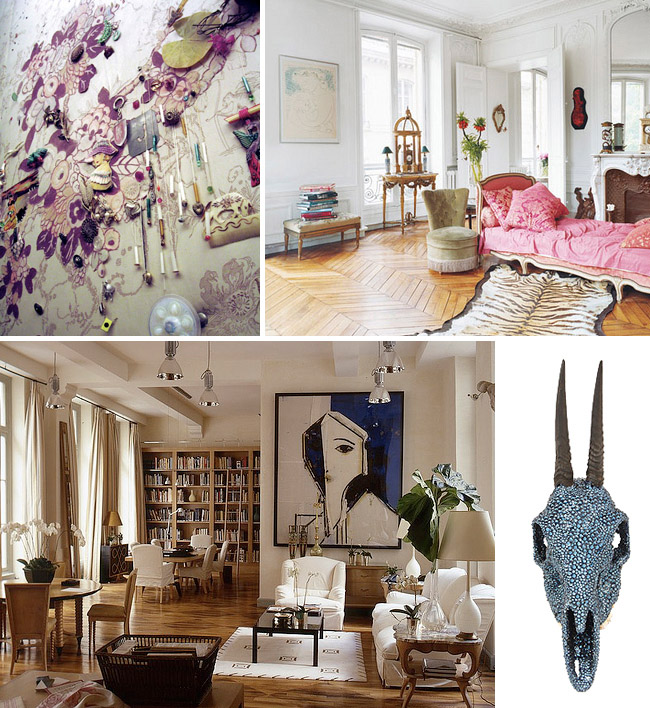 I’m really obsessed with white interiors. White walls are pretty much my favourite thing ever. Every single bedroom I’ve ever had has either had white or violet walls.

The last place I lived in alone, in Auckland, had white walls, a wall of windows & black carpet. I had two little two-seater couches & two individual overstuffed chairs, one of each in black & one of each in white. I had a big white Flokati rug & fairy lights everywhere, with vintage typewriters, leafy green plants & a light-up globe along the window. My bedding was black pinstripe with white pillows, & I had hot pink accents everywhere: throws, pillows & lampshades. The décor was really simple but the colour scheme really pulled everything together. I just LOVE a black & white palette, because you can add any colour to it & it totally pops.

When I lived in Melbourne, all our furniture was white. I probably wouldn’t do that again, because I like to break it up with black & other colours, but it suited the place we were in (which had enormous windows & insane views). Some would say all white furniture is impractical (they are right), but you can get around it by being a) nuts & b) careful, both of which I generally am. Plus, I don’t have children, which makes it an okay choice for me… 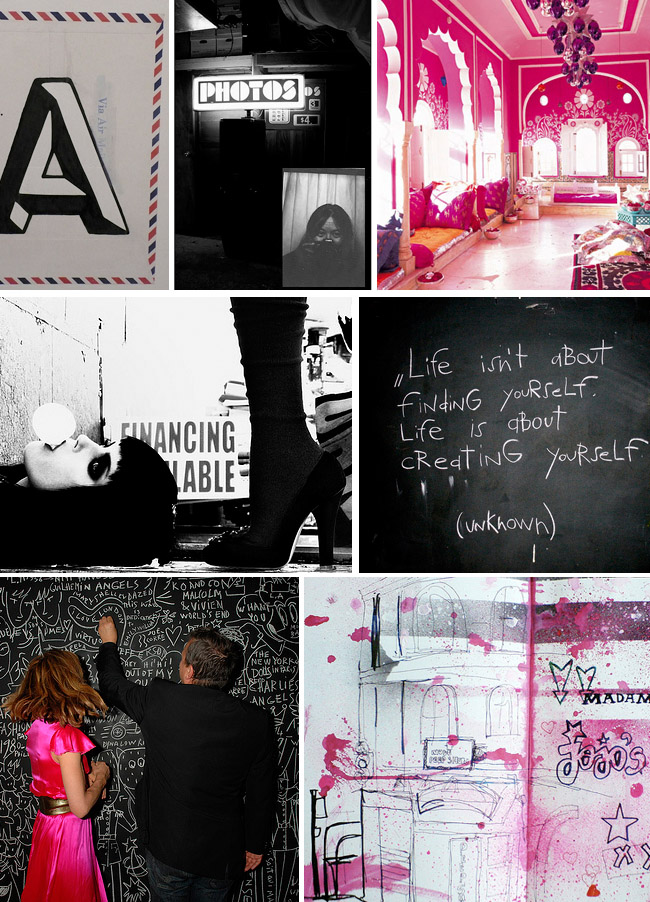 A blackboard wall… Elaborate wallpaper… Vintage typewriters… Crushed cups for serving teeny tiny drinks… Lots of light… Stacks of books… A photobooth machine (ohmygodyes)… Big mirrors… Chandeliers… A ridiculously oversized walk-in wardrobe… Hot pink & white stripes… Big type & letters… This sofa… Collections of stationery… Bedazzled skulls (!!!)… High bookshelves… Jewelled pillows… Enormous windows… & a super-cute puppy for me to snuggle with. I would also like to be kissed awake every morning, & maybe for there to be an indoor lake with sparkly swanboats floating on it. Can we make that happen?!

How would your ideal home look? What colours would you paint it & what features would it have? Would it have a slumber party room? A secret mad science-type laboratory? A huge treehouse out the back? A trampoline room?

Friday Friday Friday! Here we go! WikiFashion is the fantastic new project of one inspired nonpareil! Join! Contribute! Enjoy! Ever wondered what the differences are between Haute & Low Virgo? If you don’t know… now you know. Additionally, I would like to give a shout out to all my friends who fall within the realms […]

I Love My Magical Pills

When I was in Toronto, I stumbled upon a miracle. A real humdinger. A secret worth guarding — if only I were good at keeping secrets. Well, what then? Don’t keep us in suspense. Okay. I found magical pills. Really: magical. Here’s how it breaks down. One day I left my friend’s house in search […]

Dear Gala, I wonder if you have any advice, or could perhaps write some advice on this subject for your site for everyone to benefit from. I broke up with my boyfriend at the end of May. It was mutual. At first we agreed to be friends, & we even still went on a pre-planned […]

Oh my god, I cannot tell you how much I love this. It is BRILLIANT. The Road To Success depicted visually. TAKE NOTE! DIY embellished tights tutorial: so beautiful. Everyone’s favourite dog, Hank Williams, is up for the cutest dog competition! Please vote for him! He is the best dog in the universe & I […]

Girl time. Much needed, & very important for the soul. Nubby, Molly & Jazzi are a constant delight. It is so good to have the Nubs here — we have slipped back into our old routine, which goes something like: talk about blogging, marketing & online personality stuff/work/listen to bad old music/google ridiculous things/walk around […]

Photos from Toby loves you, John McNab, Kratzy, carter1007 & Liyin. Let’s talk grandparents. Often under-appreciated, but still well-loved, they form the backbone of our family. They taught our parents most of what was eventually taught to us, & so it goes on. My friend sent me an email last night which included something about […]

Ooh la la! It has arrived! This morning I put the sparkling finishing touches on the most recent instalment of Love & Sequins, my personal guidebook to being a love letter to the universe! Digital copies of it are whizzing all over the world as we speak, arriving with a puff of glitter into the […]