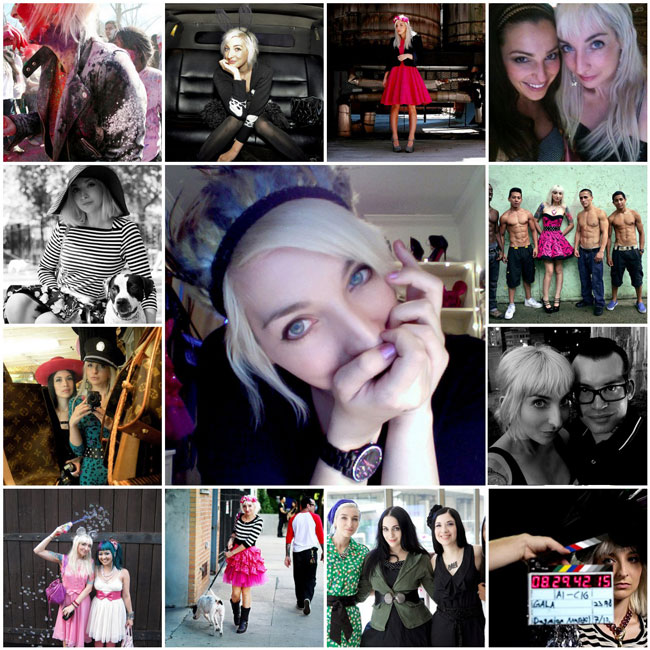 I headed into 2010 excited but foggy-headed. With a newly-obtained visa firmly ensconced in my hot little passport, I was psyched to start the new year but hadn’t set any firm goals. I was too swept away by the thrill of America! So that was how my year went: it was fun, but many of the most important tasks slid to the back-burner.

Of course, the best way to remedy this is to firstly, take stock of the closing year, & secondly, set yourself goals for 2011. (Goals & “new year’s resolutions” are completely different! A goal is something you can measure–a resolution is usually a response to eating or drinking too much over the silly season! Stick to goals & you’ll be much happier!)

Without any further ado, here is my summary of the year. It was a biggie!

Where I went // Austin, TX; Coachella, CA; Los Angeles, CA; Las Vegas, NV; San Francisco, CA; Los Angeles, CA (again); Jersey City, NJ; Easton, PA. It’s actually much less travelling than I usually do. I set the intention this year that I wanted to travel less, & be more productive. I think it worked, but I have itchy feet like you wouldn’t believe! In 2011, I will be returning (with gusto!) to my international playgirl roots!

What I did // Spoke on panels at SXSWi & Influencer10, & presented at Evolving Influence. Was part of Estee Lauder’s breast cancer awareness campaign. My mother came to town for a week & met my boyfriend! Designed my first pair of shoes (which are still selling like hot cakes!). Finally met Shrinkle after years of internet crushing! Was featured in the New York Times. Promoted a phone launch for Microsoft (on the 1 year anniversary of Mike & I being together!). Was filmed & interviewed by Google on the subject of fashion trends. Was approached by multiple people about reality television… which I turned down. (It’s a story for another time!) Was photographed by Reed Krakoff for Coach (& my photo is now in Coach boutiques all over the world!). Visited the dinosaurs from Pee-Wee’s Big Adventure! Adopted a rescue dog, Dolly, with my boyfriend. Was in a campaign for American Living for JCPenney. Bought my first pair of Christian Louboutin heels (pink glitter, of course). Had a joint birthday party with Nubby that she flew in for from Portland! Shot a holiday lookbook video for Olsenboye. Interviewed Betsey Johnson, went backstage at her show & months later, posed for a picture with her. Was sent a signed copy of Influence by Mary-Kate & Ashley Olsen for Christmas (!!!). Helped one of my best friends pick out a wedding dress! Hired a manager (

). Drove around Austin in a limousine with Molly, blasting Lil Wayne. Danced in a bus with Demi Moore’s daughter. Watched my boyfriend do an extreme food challenge (& come out victorious!). Roadtripped from San Francisco to Los Angeles with Amy & Kevin. Went to Disneyland & had the best day ever! Attended the reading of Weetzie Bat the screenplay (& got to see one of my all-time heroines, Francesca Lia Block, in the flesh)! Had an eye-shadow named after me (thanks Amy!). Sat on Santa’s knee with Chloe! Wrote about radical self-love for Bust magazine. Had a feature in Inked. Phew… Top five purchases // Bubble gun (Disneyland): Hours of entertainment! Dr Marten Regina boots: The most comfortable boots I have ever owned? Chocolate faux fur coat (vintage): Warm, cozy & chic belted. Lush Vanillary perfume: I don’t think I have ever had so many compliments on a perfume before… Suffice to say, this stuff smells truly délicieux (& Nubby owns it now, too!). Filofax: Organisation ++!

Definite style obsessions // Bangs: I cannot tell you how much I love having a fringe! Flower crowns: I wore THE HELL out of my pink flower crown this summer! Betsey Johnson everything: All my favourite pieces are by Miss BJ! All kinds of headwear: From black floppy hats to sparkly ears to my pink metalflake helmet, I always feel better with something on my head than without. Hot pink underwear: My drawer of skimpy underthings is a sight to behold &/or visual assault, for sure… & I love it!

Best things I did for myself // Quit coffee & soda: I feel so much more sane & grounded! Saw a personal trainer twice a week for almost a year: Again with the sanity, but the best thing about this was how GREAT it made me feel (& look)! Re-upped my raw food & juice intake: My body really craves those things when I don’t get them. Started meditating every morning: This just makes life better, in general. (I’ll be writing more in detail about all of these things soon!) Top five events // Disneyland with Nubby, Amy, Kevin & Zoetica. It was fantastic. Las Vegas with Jess. Non-stop shopping, eating, walking & serious pool-time. Perfection. A certain something which happened at the Google Boutiques party… ! Going to parties with Mike–we have the ability to make any situation, no matter how ridiculous, awesome. Collapsing into bed at the W Hollywood after a gruelling Coachella adventure. Inspiration boards // I have two which hang above my desk. This year, they looked like this:

Quotes on the wall // “This is your world. Shape it or someone else will.” (Gary Lew) “We just might be the luckiest people alive!” (Mike Dooley) “Kisses are a better fate than wisdom.” (e.e. cummings) “Nothing seems impossible to you.” (Fortune cookie!)

2010, thank you for all that you were. A buffet of opportunity; a year of sparkle, colour & delight; a time of questioning, reaffirming, & making sometimes tough choices, but eventually basking in the delightful knowledge that I am on the right track, baby!

I can’t even tell you how excited I am for 2011 (two-thousand-&-heaven)! There is this feeling inside which lets me know that it is going to be, without a shadow of a doubt, My Year. I hope it is yours, too.