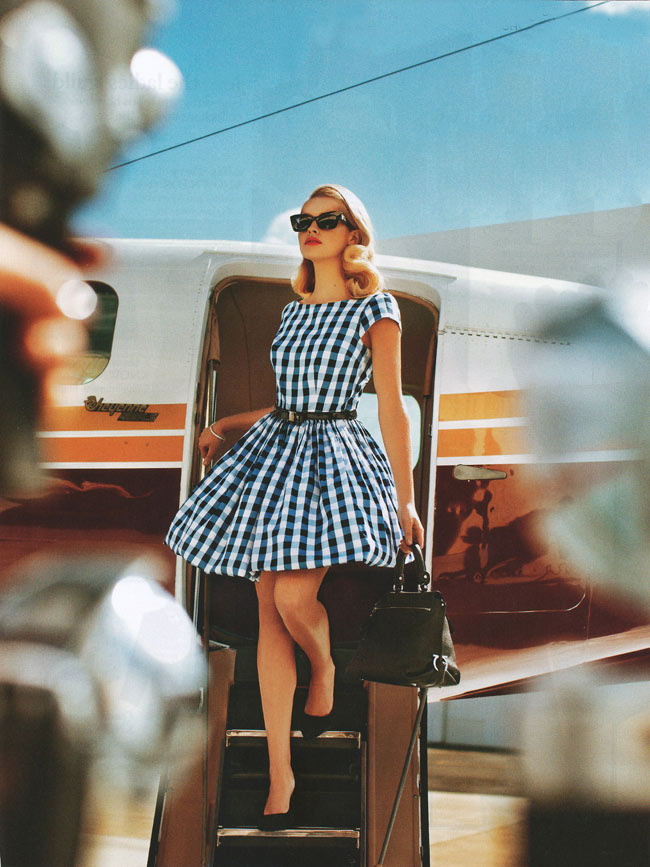 Call it my restless spirit or just chalk it up to my Sagittarius Moon: whichever way you slice it, travel has been — & always will be — an essential part of my life. I abhor the idea of staying anywhere too long, & after about a month & a half of any one location, I’m itching to move on.

That’s when I get all feverish & start investigating the possibilities. Where should I go next, & what should I do there? What I wouldn’t give for a private plane & a packed suitcase! Oh!

My idea of a good holiday has a lot of eye candy, plenty of glamour, a hint of mystery & a good whiff of madness. All of my favourite places — New York City, Paris, Las Vegas & Los Angeles — have these things in spades. However, as much as I love to go back & re-experience the tried & true, there’s nothing quite like visiting a city or country for the first time. It really is one of my favourite things.

If you’re similarly lusting for a change of scenery, join me in a fit of imagination! Here are a few places I’m currently fantasizing about… 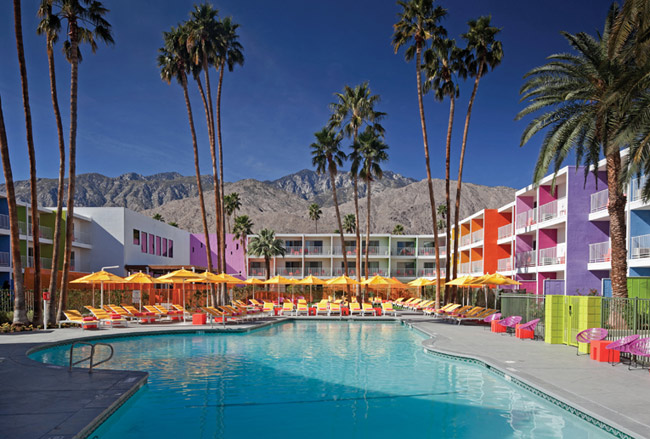 The Saguaro is a rainbow-hued hotel in Palm Springs, California. Palm Springs is home to the Coachella Valley, which is, of course, where Coachella goes down every year. It’s not all feather hair extensions & shredded denim shorts, though! The area really started to boom in the 1920s when Hollywood movie stars would visit seeking rest & rejuvenation. It got even more popular in the fifties & sixties: Steve McQueen, Cary Grant & Judy Garland (among hundreds of other stars) all had homes in the area.

The reputation of Palm Springs isn’t much different these days. It’s still seen as a playground for the rich & famous, with some of the most amazing spas in the country, as well as fantastic architecture & art.

The Saguaro sounds like a wonderful place to spend a long weekend. They offer daily yoga & have an Olympic-sized swimming pool surrounded by cabanas. There are hot tubs, poolside bar & food service (YES!), a fabulous spa & wifi. The rooms are bright, colourful & spacious. Really, is there much more that you need?! I’d say it’s the perfect getaway.

You can read about a Palm Springs yoga retreat here, & see some more pictures of The Saguaro here.

P.S. I hear the vintage shopping in Palm Springs is a- to the mazing! Just another reason to add this destination to your travel wishlist… 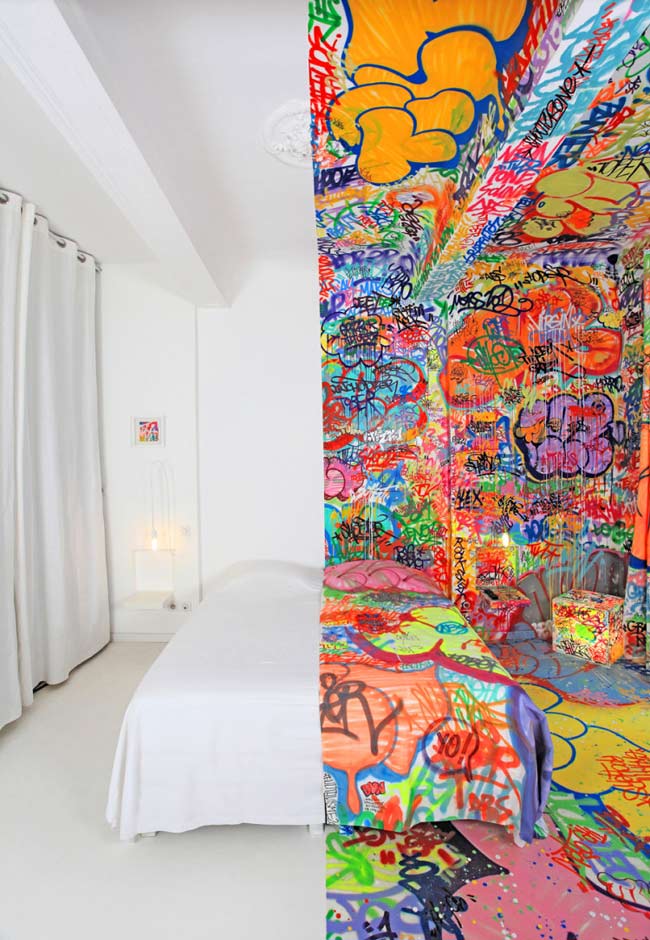 Yes, this is one hotel room: not two photographs stuck together! Isn’t it fantastic?! It makes my brain go crazy with photo possibilities.

This one-of-a-kind gem is tucked inside Au Vieux Panier in Marseilles, France. Au Vieux Panier is an extremely unique hotel featuring five rooms which are painted by artists, & re-done every year. The hotel puts out an annual call for submissions, then closes the hotel for a month while the new rooms are executed.

This particular room is by artist Tilt, & it costs 135 Euros a night to stay. You can see more pictures & learn the story behind the room here. 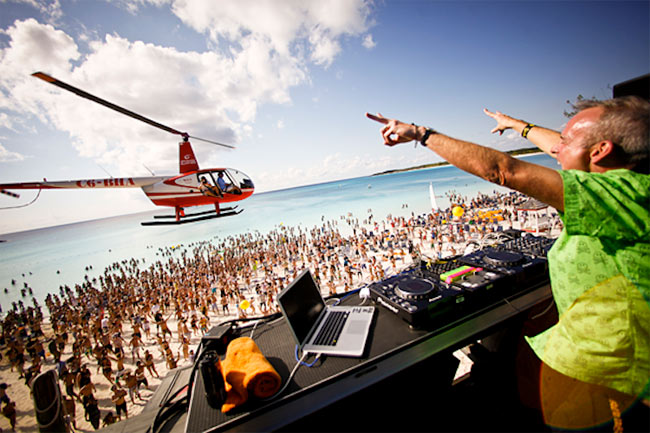 Holy Ship is a three-day cruise to the Bahamas for, well, the rambunctious & the young at heart! Far from sedately cruising around the islands, this is the only boat that could cause a tidal wave with its sub-woofers!

Yes, this is dance-dance-party-party type of cruise. The line-up for 2013 hasn’t been announced yet, but this year the January cruise featured Diplo, Fatboy Slim, Skrillex & Steve Aoki, among others. Oh, did I mention Dita Von Teese was there, spinning around in a huge martini glass… ?!

This is definitely not your grandparents’ cruise ship. That photo above is of Fatboy Slim playing to a crowd on an island in the Bahamas, while a helicopter flies overhead… There are silly outfits galore & mini-golf, & the price of your ticket includes your room, entertainment & food for three days. (It sounds like the price runs between $800 & $1500, depending on the quality of your lodgings.)

SPIN magazine’s photographs are pretty neat, & as you might expect, FHM’s coverage is interesting but heavy on lecherous photography. Sure, after three days, you might want to stab everyone onboard, & sure, the ship hit a massive reef this year & had to be rescued by a fleet of tug-boats. Apparently, though, everyone onboard was having so much fun they didn’t even notice!

Whatever! I’m still game! Are you?! 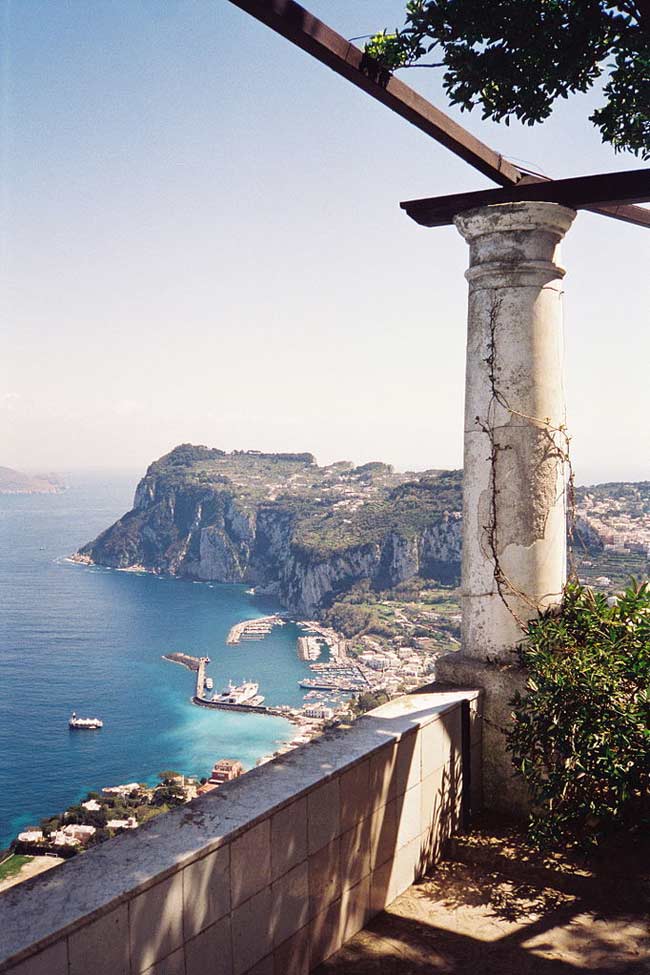 I’ve never been to Italy, & — embarrassingly — I didn’t know where exactly Capri was until I googled it. I was inspired to look it up after reading Jonathan Adler’s praise for the place. He says,

I’m not a very adventurous traveler. You won’t find me stalking rhinos in Uganda. Maybe I’m just an old fart, but if I go somewhere & have a fab time, then I go back. My cautious Jewish gene has made me a creature of habit. One place where I have had a fab time — again & again & again — is Capri. The island is so totally ’50s. It looks & feels exactly the way it did in The Talented Mr Ripley & Godard’s Contempt… Whenever in Capri, I stay at La Scalinatella. Sublime & surprising, La Scalinatella is heaven on earth! The lobby — with its tile floors, clover-shaped windows & surreal objects — perfectly captures the dreamy quality of Capri.

1. The crooked lanes of Capri were designed to confuse marauding pirates (!!!) which is honestly reason enough to visit, don’t you think?!
2. During the sunrise, the sky turns from deep violet to pink to orange to gold.
3. Additionally, you can take a boat through the Blue Grotto (Grotta Azzurra) or swim in the Green Grotto, which “looks like an enormous liquid emerald”. SOLD!

This makes me want to visit Italy pretty badly! 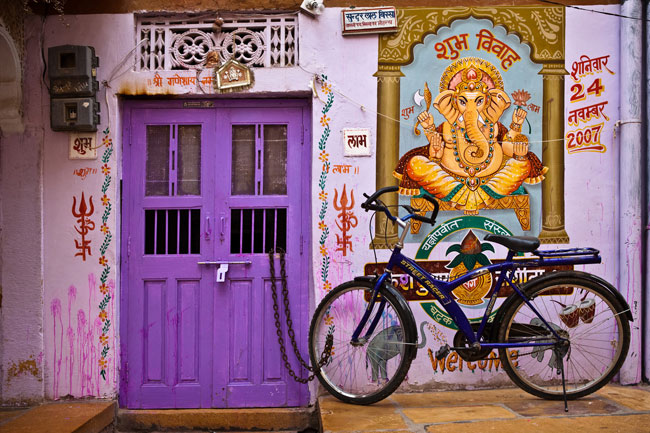 India is still at the very tip-top of my list when it comes to places I want to visit, but it’s also the most intimidating. I keep putting it off because honestly, I don’t know where to begin. I mean, just look at the WikiTravel entry! I also know that India is going to change my life. (I felt the same way about NYC & lo & behold, I was right!)

I want to spend a month there, exploring the pink city of Jaipur & the beaches of Goa, getting immersed in the way of life in Kolkata & luxuriating at The Lake Palace Hotel. I’d love to experience Diwali & watch a Bollywood movie in a theatre in Mumbai. Yes, I want to take many long train rides!

I don’t think I’ll be bathing in the Ganges, though…

Over 60,000 people come down to the waters edge every day to take a dip in the sacred waters of the Ganges. Try not to think too much about the dozens of sewage pipes and sunken corpses in the waters around you and you’ll find it’s not nearly as bad as you expect once you’re actually in it. (Source)

I know I’ve said it already, but I am so, so excited about The Best Exotic Marigold Hotel, a movie about a bunch of British senior citizens who go to India to live out their twilight years. It comes out on May 4th (soon!), & I think that seeing it is going to reinvigorate my desire to take flight…

The good news is that my husband & my father want to visit India too, so maybe we’ll go as a group one day!

…Back to reality, I guess. SIGH! SIGH! Do you want to visit any of these places now? What’s your ultimate travel destination? Let us know!

P.S. I know last week’s posts were a little heavy! This week, the content will be decidedly frothier ;D I hope you enjoy it!

Art by Alessandro Pautasso. I loved this (long) article on Kanye: American Mozart. The comments, predictably, are rubbish. (What else is new?) Someone asked Molly Crabapple what advice she’d give to her 18 year old self. I regret every moment I spent trying to make the adorable and tiny when I could have been plotting […]

I love overgrown buildings! This one backs onto my favourite secret garden in the East Village. Heureux jeudi! It’s overcast & grey but I’m listening to Tupac so I’m happy! I hope you’ve had a fun week. Mostly, I’ve been sitting at my desk trying to stretch my brain around various projects! Yesterday at about […]

Cutting & Self-Harm: The Stigma & The Aftermath

Please be aware that this post could be triggering for some people. Over the last week I have received multiple emails from women who have described themselves as “previous self-harmers”. One of the emails dealt with that issue specifically — the writer is covered in scars & burns & wanted my advice on how to […]

A month ago, I spoke at TEDxCMU. TEDTalks are a big deal, & have been an obsession of mine for years, so you can only imagine my delight when I was asked to participate at a regional level! TEDxCMU was held at Carnegie Mellon University, & with an audience of 500 students & faculty, it […]

1960s vixens (& psychedelic sequins)! Why yes, those sequins ARE on a dress in my wardrobe! Hello! It’s Thursday! Yes, it’s almost the weekend — hallelujah! This also means, of course, that it’s time for a little Things I Love Thursday action. Here’s this week’s list! That button was one of my favourite things about […]

Things You Should Definitely Do: Become Part Of A Moving Rainbow!

Photo by Zachary Strain. If you’ve ever wanted to experience Holi — the Hindu celebration of Spring which is best known for the brightly-coloured powder which is thrown around — but haven’t gotten around to attending, I have an idea for you! Join me in The Color Run! Okay, before you’re put off by anything […]

Oh hey, Kiwis! This is just a little note to tell you to tune into Good Morning on Wednesday morning at around 9.25am… I’m going to be Skypeing in to tell you what’s going on in New York City! (For everyone else, hopefully I will have a video of it that I can share with […]

Quelle semaine! (What a week!) It feels like I’ve done a million things in the last few days. That’s just another reason why I love spring: life starts to pick up its pace in a major way! So, you might wonder why I’m lying on top of an Expedit full of shoes… The answer is […]

The Ultimate Guide To Making Your Period Suck Less!

Periods. (Sorry, fellas.) Does anyone really enjoy them? I don’t think so. Even those super-grounded, patchouli-scented “Earth Mother” types who like to talk about cycles & the moon probably (secretly) become screaming PMS hellbeasts! I know that I become a complete, walking girl cliche. I have been known to stand on line holding a tub […]