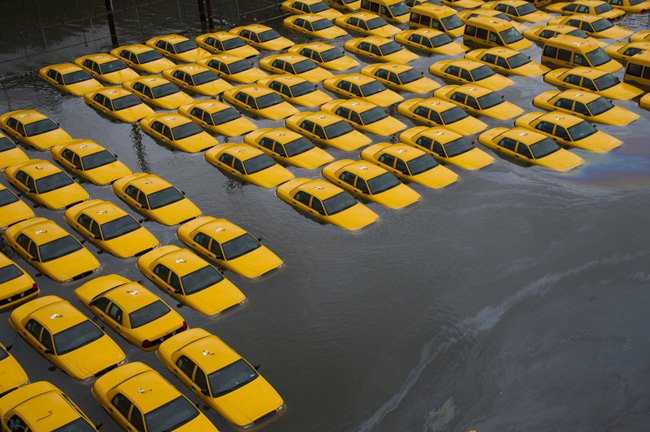 I’ve never seen New York like this. On Monday night, the police cars on my block were underwater. The aftermath is unreal. Leaves, bloated with storm water, clog the streets. People stand on corners, pointing the dying light of their iPhone at the sky, hoping for a signal. Mattresses have been tossed out onto the sidewalk, sodden & useless.

The power went out on Monday, not long after the sky flashed emerald green. The power plant exploded, its transformers sizzling up the sky with a cosmic death rattle. The East Village was hit hard. Looking out our window, you could see waves in the road — like we were on a boat.

The weirdest thing? In Manhattan, above 39th Street, it’s business as usual, but the lower part of the island is in a state of crisis. Basically every business below 39th Street, whether it’s a corner store, a supermarket or a restaurant, is closed. There is no food. The supermarket on my corner was completely destroyed by the floodwaters: even after two days of pumping, the basement is still filled to the ceiling with water. In the supermarket itself, all the shelves were knocked down & the food is lying in a mix of salt water & sewage.

There are 550,000 people without power in the city right now, which sucks for everyone, but for the elderly or people living in high-rise buildings, it is a disaster. Our stairwells are dark, & we are taking cold showers. Our cellphones are either dead (no power) or useless (all the cellphone towers in our area were knocked out). 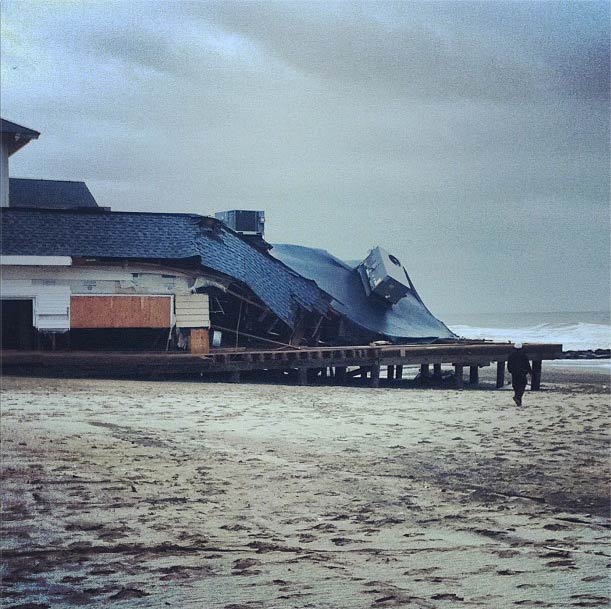 Entire towns have been wiped out. Before the power died, I saw on Twitter that FDNY were coordinating rescues of people by row-boat. In Battery Park, cars flipped upside down, floated & then lodged themselves into little alleyways. There were rooftop rescues on Staten Island. Hundreds of houses burned to the ground in Queens. 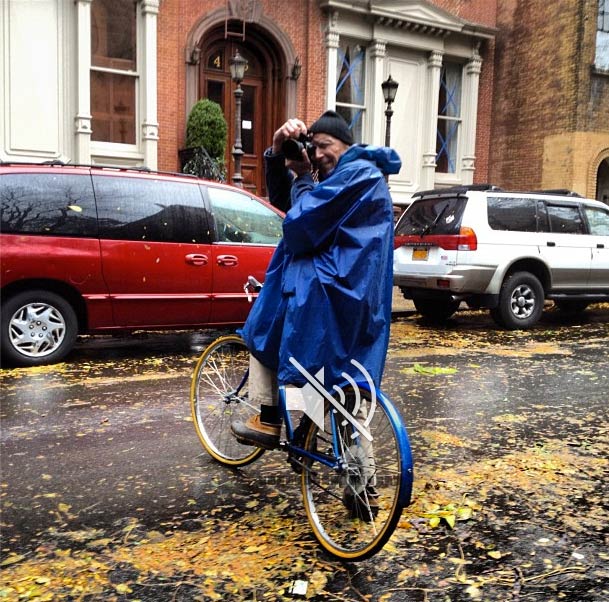 Bill Cunningham, of course, is still out working! (I love that photo! He never takes a break.) Even so, we are not supposed to get power back for another three days.

My husband & I, thankfully, live on a piece of the street which is raised up just a little bit. Our building didn’t flood. So many people on our street were flooded — I can’t believe our building was untouched. We have a gas stove in our apartment, so Mike has been preparing me grilled cheese sandwiches & ravioli by candlelight. (Quite romantic, really.) Our friends picked us up a couple of hours ago & took us to Brooklyn: I’m working in their living room while Mike is out buying more food & supplies. We are so grateful.

Anyway, I just wanted to jump on & say that we’re fine. It’s not ideal, but we’re so much better off than so many people. The weirdest thing is keeping ourselves occupied. I’ve been writing in notebooks so as not to waste battery power. Yesterday, I cleaned out my closet, which was quite amazing. Other than that, I have been reading a lot & snuggling with the dogs.

In beauty news, I washed my hair in the sink this morning, & dried it under my hat. I’m thinking about doing a “hurricane glamour” piece where I recommend stockpiling dry shampoo, & also wearing wigs, & pointing out that my Clarisonic still works! (It sits in a charger, & holds juice well.) When everything else is going to ruin, it’s nice to have a clean face. But, then again, most of us have bigger problems.

You can read CNN’s ongoing coverage here, & see some astounding photographs here & here. Mostly, though, I hope everyone is okay. Please stay safe & help your neighbours & be good to one another.

Sending super-mammoth amounts of love to everyone,

« 100 Things To Do When You’re Stuck Inside!
What Really Went On At The Blogcademy? »

100 Things To Do When You’re Stuck Inside!

Cabin fever is real, you guys. The Frankenstorm is picking up speed in New York City, & it has me preparing for the worst: it’s just gonna be me, my husband & our two sleepy dogs for the next few days. In order to prevent us from losing our minds, I started making this list […]

What To Watch TONIGHT On Netflix Instant!

As I write this, everyone in New York City is battening down the hatches in preparation for this “Frankenstorm” we’ve been promised. The news is awash with threats to stay inside at all costs… & quite frankly, it sounds like the perfect excuse to watch a little television! My husband & I cancelled our cable […]

Things I Love Thursday: Adventures In My Favourite City!

This was one of those weeks that really reminded me exactly how much I love New York City. It is the best city in the world, really, truly, 100%. In the past few days, I have taken a boat trip to see the Statue of Liberty, dragged will.i.am into a photobooth, taught 30 women how […]

Lessons I Learned From Writing Love & Sequins, Or, How To Create A Digital Product That Earns You Squillions!

Photo by David McNeil. Love & Sequins is a book I wrote over the period of a year, around 2009/2010. The idea behind it was that I wanted to write a book, but couldn’t figure out how to make the time to do it when I was also updating my blog every day. My solution […]

The Blogcademy: A Weekend In Pictures!

What a wild & exhilarating weekend! Though we all feel like we’ve been some through some kind of stylish & fabulous war, I think it’s fair to say that our very first Blogcademy was a smashing success. It was absolutely incredible to spend the weekend with 30 enthusiastic & excitable students, to teach them as […]

Photo by Lisa Devlin. It may have been quiet around here this week, but my real, offline, meatspace life has not! As you probably gathered from our excited Instagrams, tweets & Facebook updates, Kat is in the city & we’ve been causing trouble ALL over town! See? There has been beaucoup du silliness! We’ve been […]

Things I Love Thursday: Getting Into The Halloween Spirit!

Can’t tell you how much I love this quote. It says so much, & is the perfect opener for Things I Love Thursday! It’s all very exciting around here. Kat & Lisa are winging their way across the Atlantic as we speak! We have so much silliness planned, from lunch with Naomi to visiting Nanette […]

How To Survive Your Saturn Return!

If you’re almost 30 & your life feels like it’s hitting the skids, there is a perfectly rational — & astrologically sound! — reason. That reason is that you’re experiencing your first Saturn return. Oh yes, indeed! I know many of you are turning your heads to the side & wiggling your eyebrows in a […]

Your Hair Always Looks Better The Morning After…

Photo by David McNeil. My hair is a major state of flux right now. After having long extensions for years, my hair is finally long enough that I don’t need them! As Shangela would say, HALLELU! I can actually put my hair up in a ponytail! (Fellow short-haired girls will understand my excitement about this!) […]