A Dizzying Day At Disneyland! 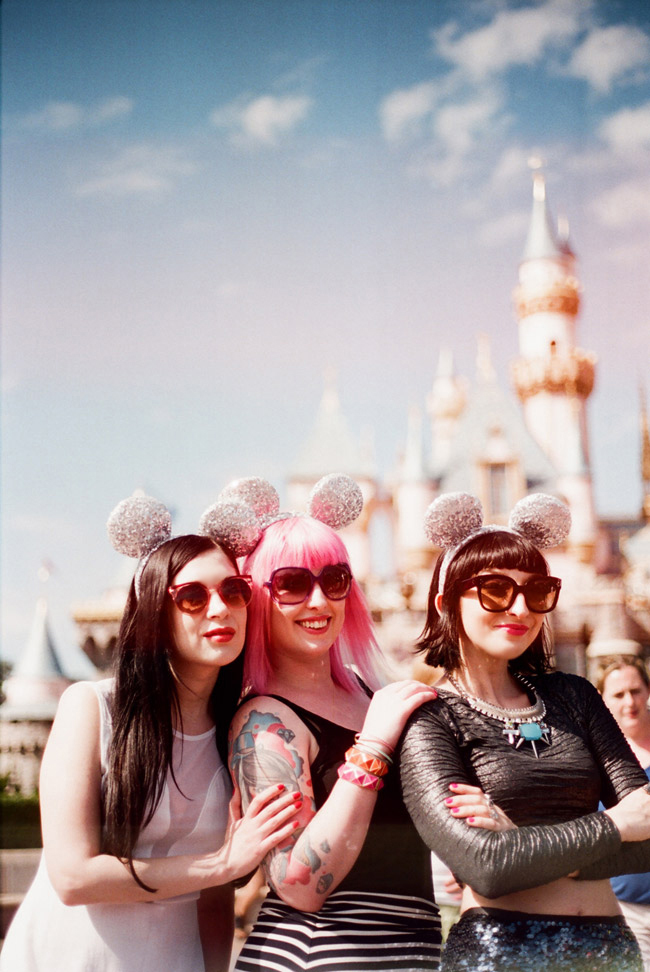 To celebrate Kat’s birthday, we went to Disneyland. It had been decided months earlier, when we were making our initial Californian travel arrangements. And when I say “it had been decided”, I really mean that I had commandeered the schedule.

“We should definitely go to Disneyland while we’re there,” I said.

“I’ve never been to Disneyland! Is it cool?” Kat asked.

“WHAAAAAAAAT?!” I exclaimed. “YES it is cool! I can’t believe you’ve never gone! We are taking you there for your birthday.”

That’s why, very early one morning, Kat, Shauna and I piled into an Anaheim-bound SUV with Christina and Alie from Made U Look.

The day did not have an auspicious beginning. I had been feeling nauseous since I woke up, and ended up puking even before we arrived at The Happiest Place On Earth. I walked around feeling sick to my stomach all day, unable to eat anything but dry pretzel crackers, or drink anything but frozen apple juice. And when we got there, Disneyland was absolutely swarmed with people.

We could have moped around complaining all day, but we didn’t. We decided to have a good time, and of course, we did! Our day was made even better by Alie and Christina, who are some of the best, coolest, most chill girls we’ve ever met. 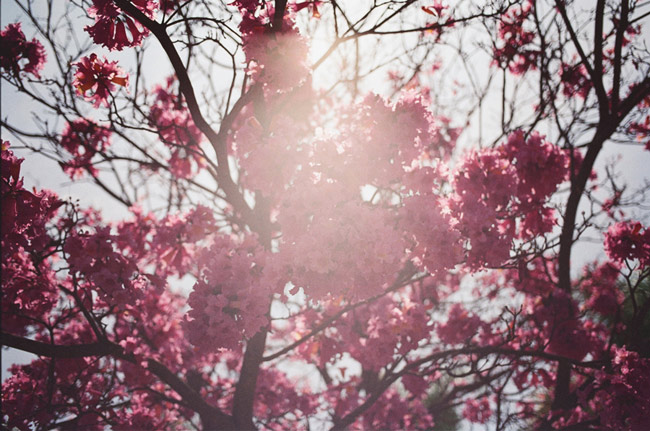 We were so blessed to be there in the most beautiful season of all: spring. Disneyland’s cherry blossom trees bloom with the most intensely-saturated pink flowers I’ve ever seen. Insanely gorgeous. 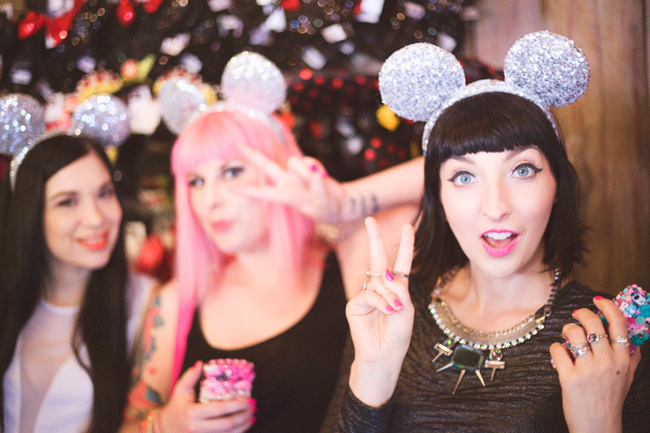 Before we went on any rides, our first priority was CLEARLY to nab some new ears to wear for the day. We ended up getting matching silver sequin ones. As somewhat of an ear connoisseur, I noticed that they’ve changed the way they make them. I think these will probably hold up better than the last few pairs I’ve owned, but time will tell! 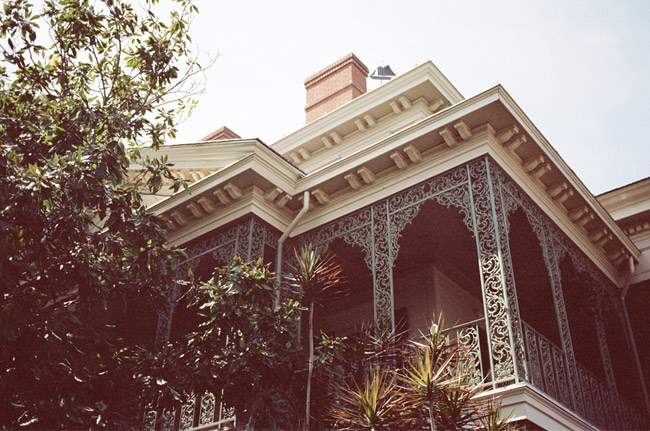 Our first stop was The Haunted Mansion. It’s my favourite ride bar none, and I have to tell you, the excitement of ghosts and spectres made my nausea all but disappear! 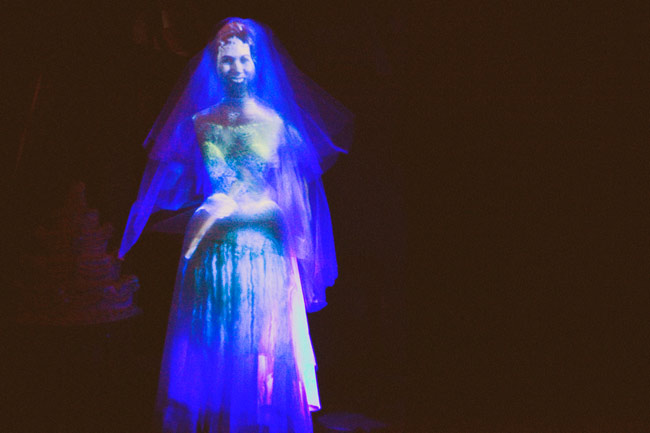 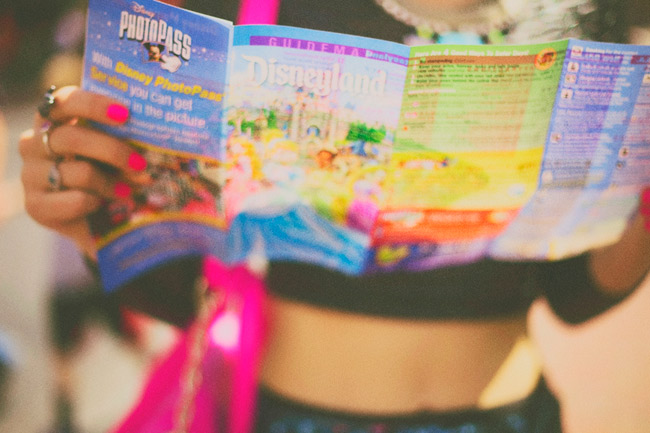 Hmmm… Where to go next? 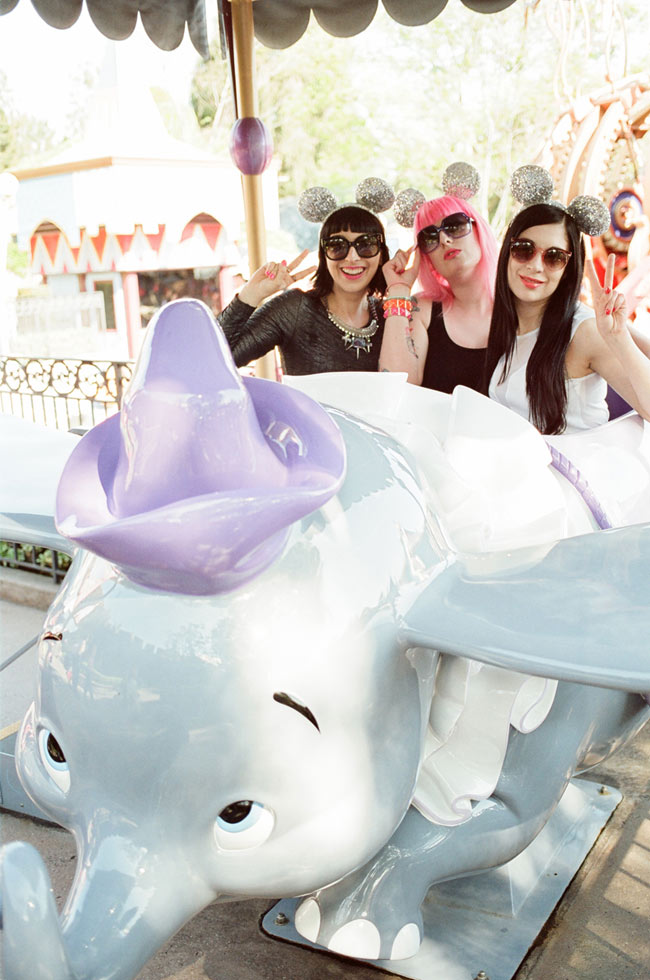 We pushed a little kid out of this Dumbo so we could take a picture. How mean! 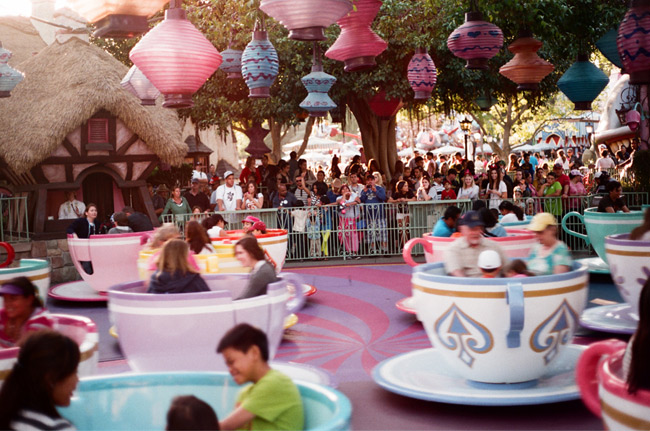 Mad Tea Party is one of my favourite rides, especially at dusk. 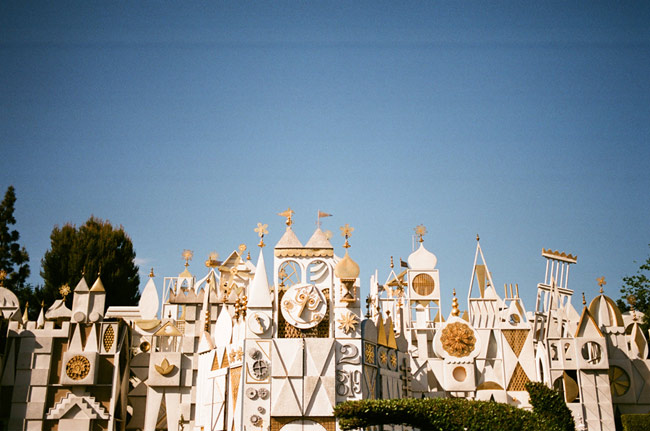 It’s A Small World is super-iconic. I haven’t gone on it since I was 7 — once was enough, I think! — but Mary Blair’s design has totally stood the test of time. It looks so cool, and I love the colour palette against the blue Californian sky. 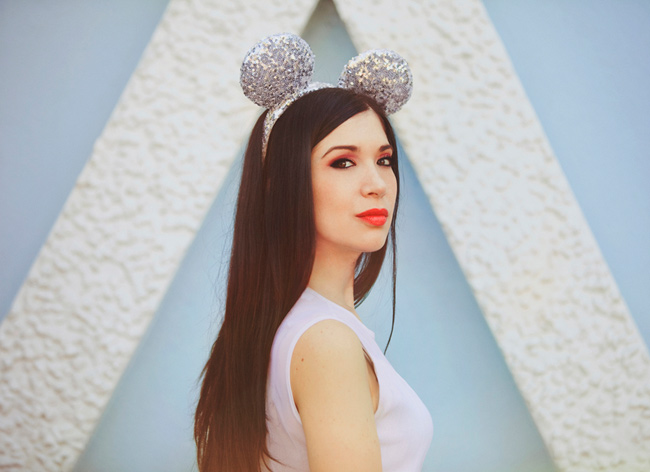 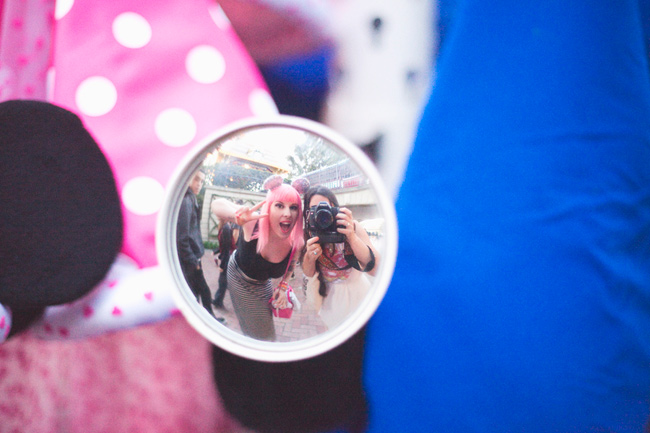 Christina and Kat can’t resist a mirror! But given how gorgeous they are, who could blame them?! 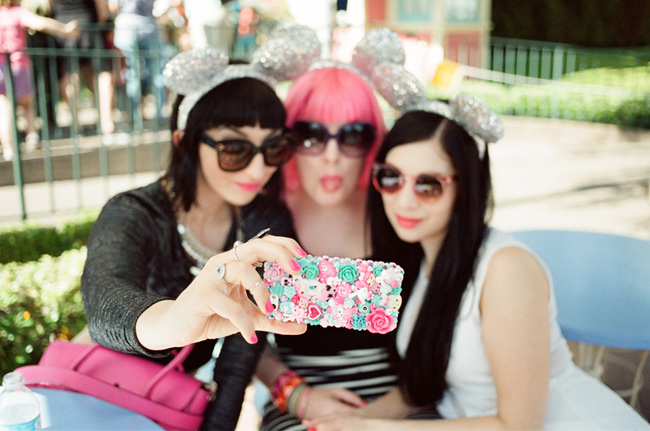 My case (and Kat’s case too) is by LUXYLOLI. (I have told so many people about her that she sent me a Christmas card last year!) One arm extended with a phone in hand is clearly my resting pose. 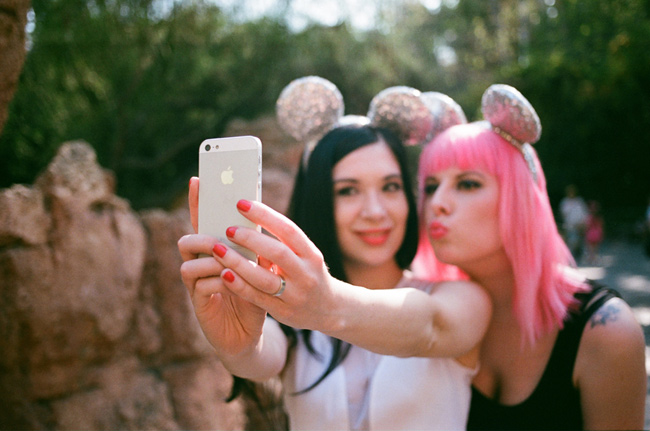 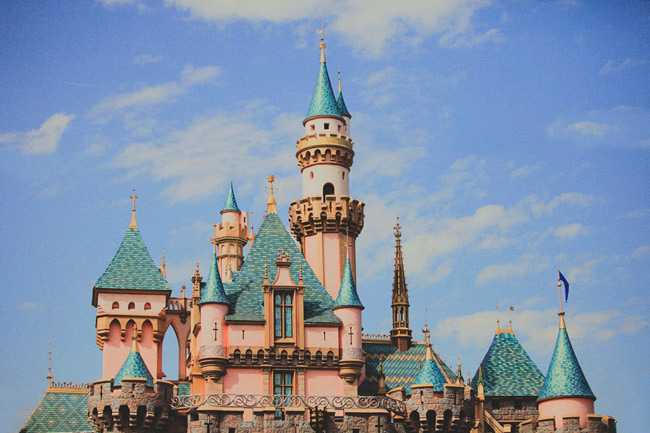 Sleeping Beauty’s Castle was based on the design of Neuschwanstein, which I visited when I was 15 years old. It is CRAY and lavish to the max. Did you know you can get married at Disneyland? (As you would probably guess, it ain’t cheap!) 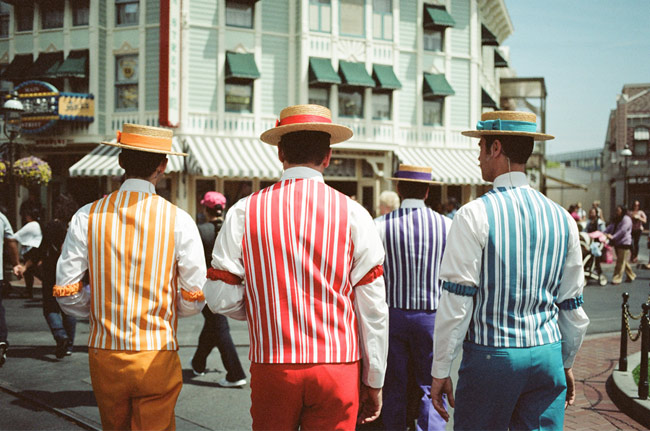 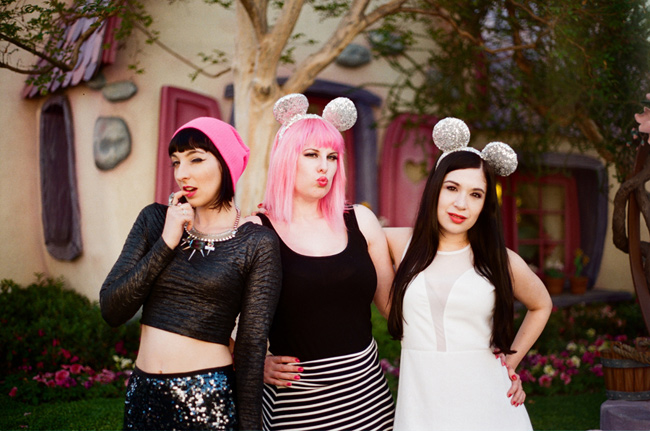 Gettin’ sultry at Minnie Mouse’s house. I mean, who could resist?! 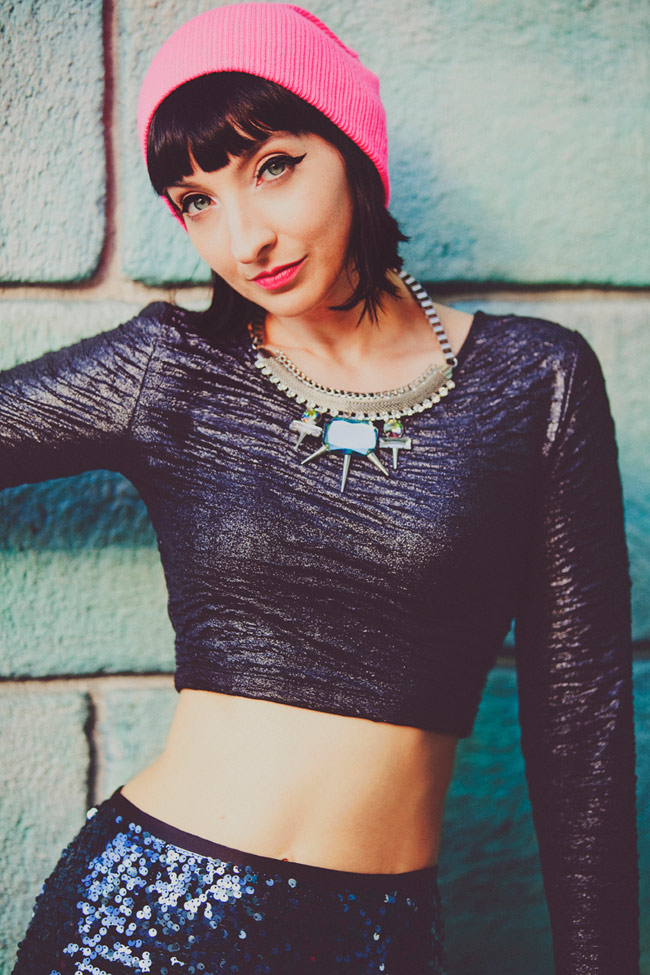 I was wearing a neon pink knit hat from Urban Outfitters, a bizarre and dangerous necklace from TopShop, a metallic silver crop top from ASOS, a Calvin Klein sequin maxi skirt, a Kate Spade bag and Nike Frees. (I’m so glad I wore them! The perfect shoe for Disneyland.) 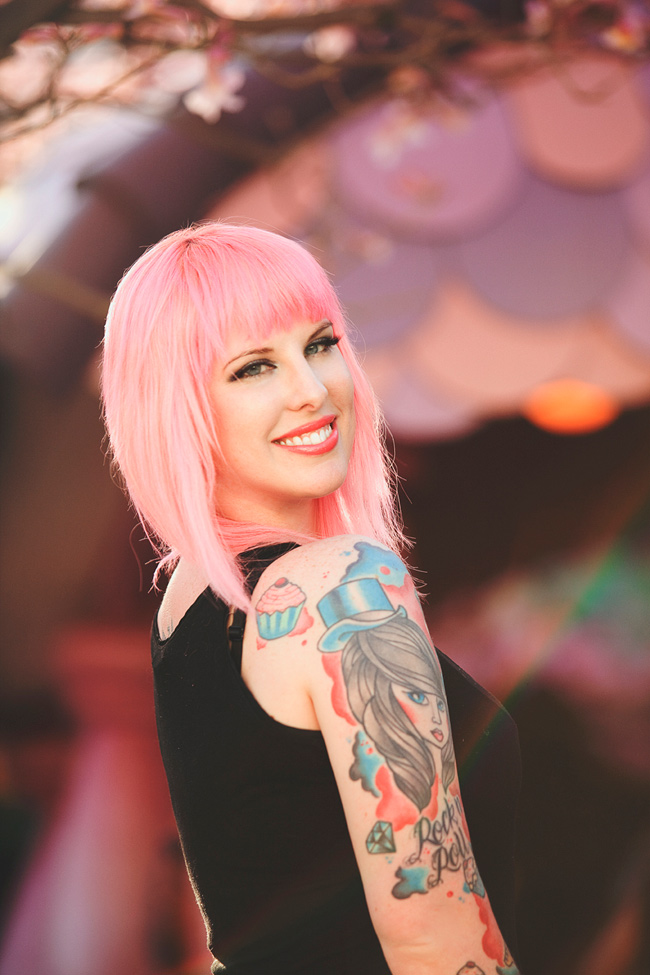 This is the best photograph of Kat I’ve ever seen. I want to marry it over and over again! Did you notice the RAINBOW?! 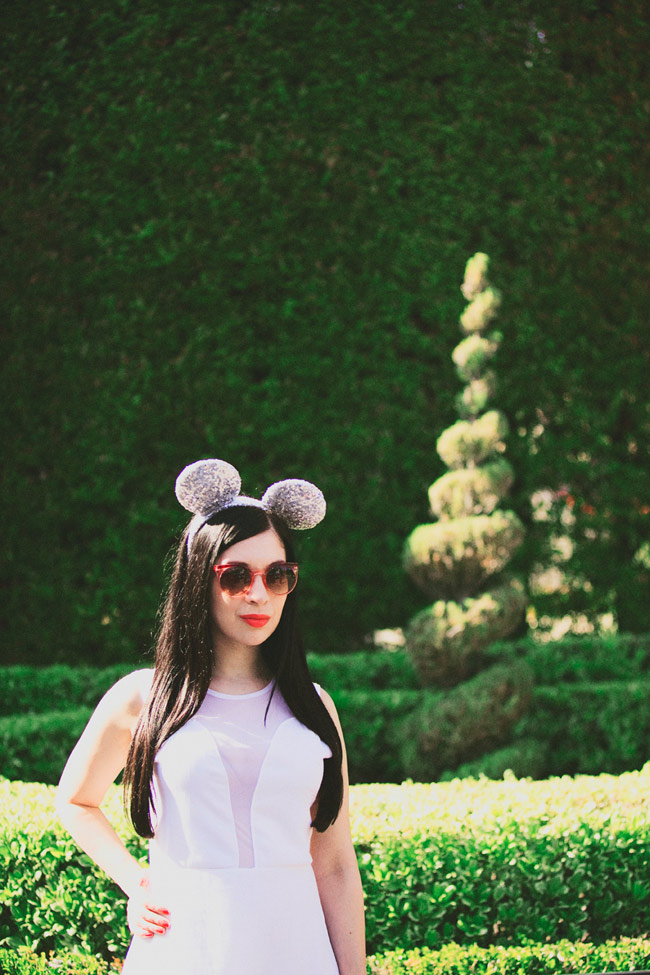 Shauna and topiary are a match made in heaven. I know that when she’s 50 she’ll have a garden full of them, just like Edward Scissorhands. She was wearing this dress and Christina’s sunglasses! 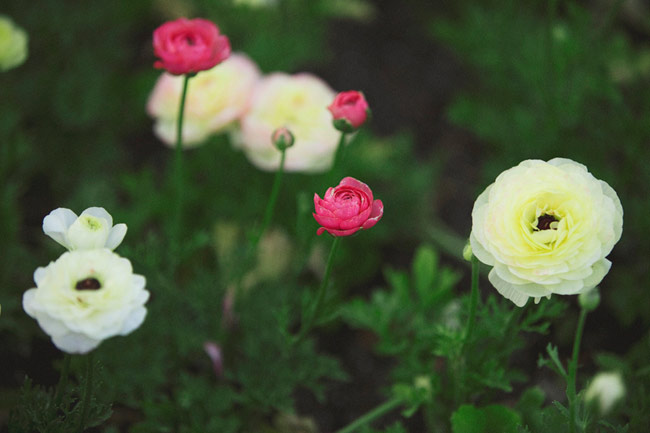 Even the flowers at Disneyland are absolutely perfect. Sometimes I wonder if they have people painting them in the mornings, like in Alice In Wonderland. 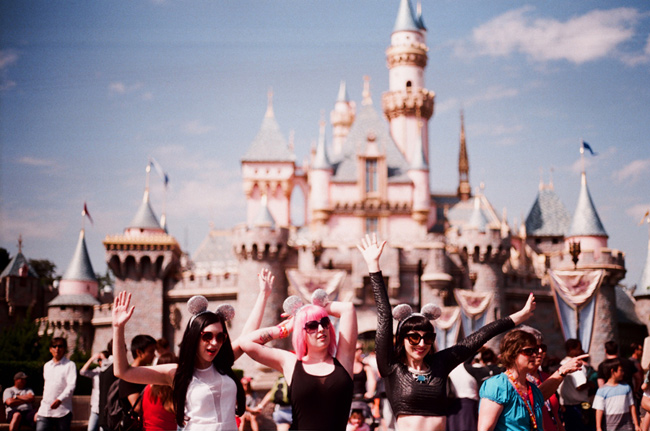 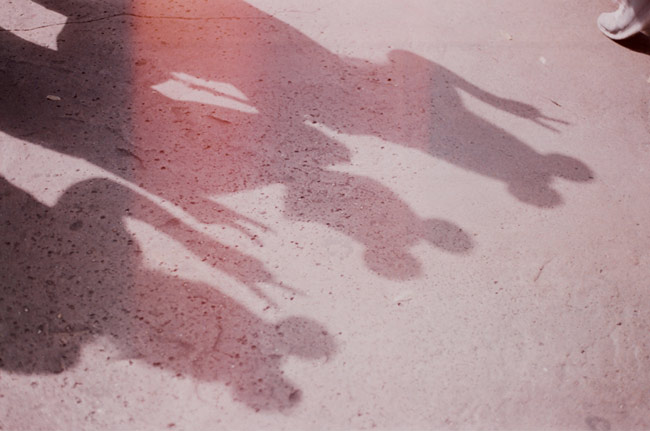 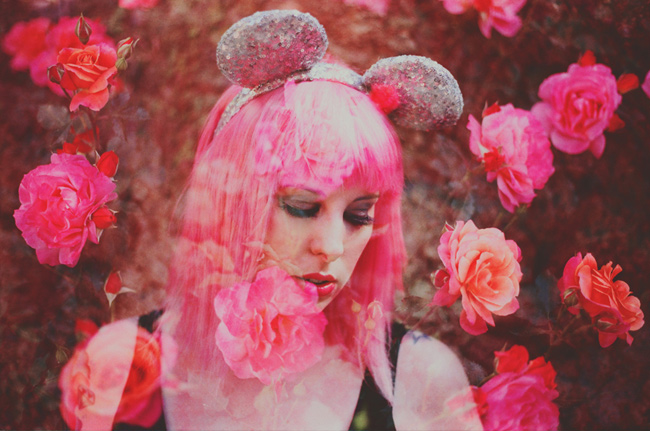 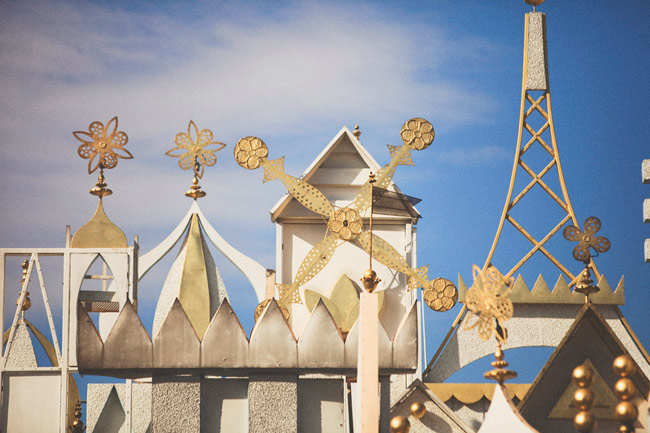 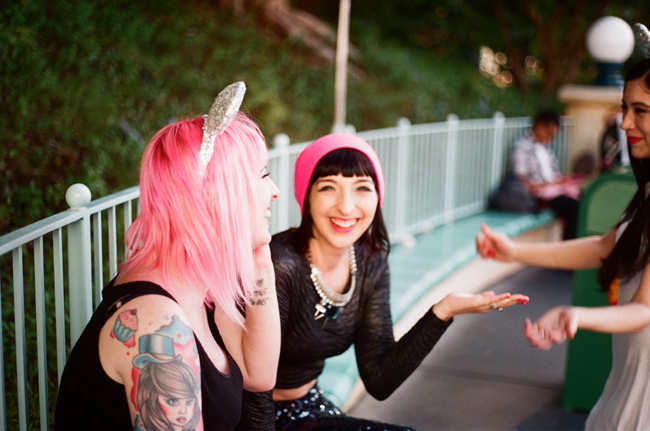 After a little rest in Mickey’s Toontown, which included swallowing ibuprofen, snacking on candy floss and getting photobombed by a guy with a gigantic backpack, we were ready to soldier on. Shauna had gotten her power back, and was doing interpretive dance. 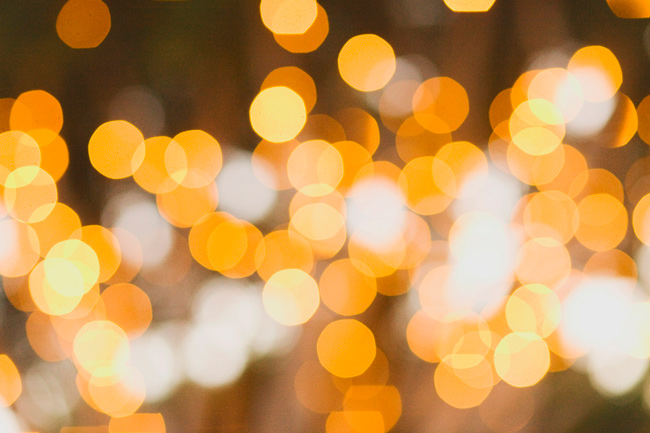 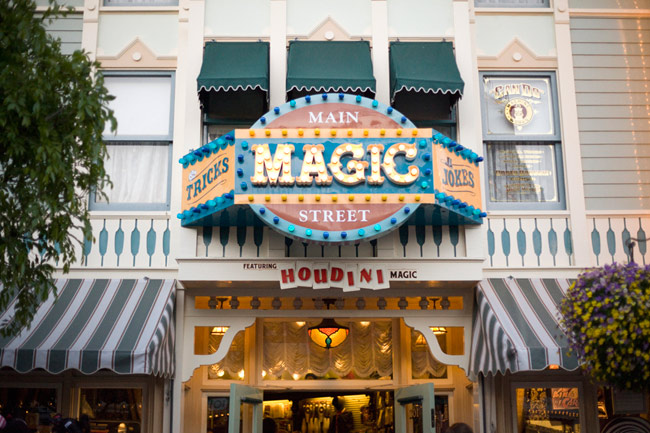 When I came to Disneyland as a kid, I spent so much time in this magic shop. My obsession with magicians goes way back… I even had a top hat with a secret compartment inside! 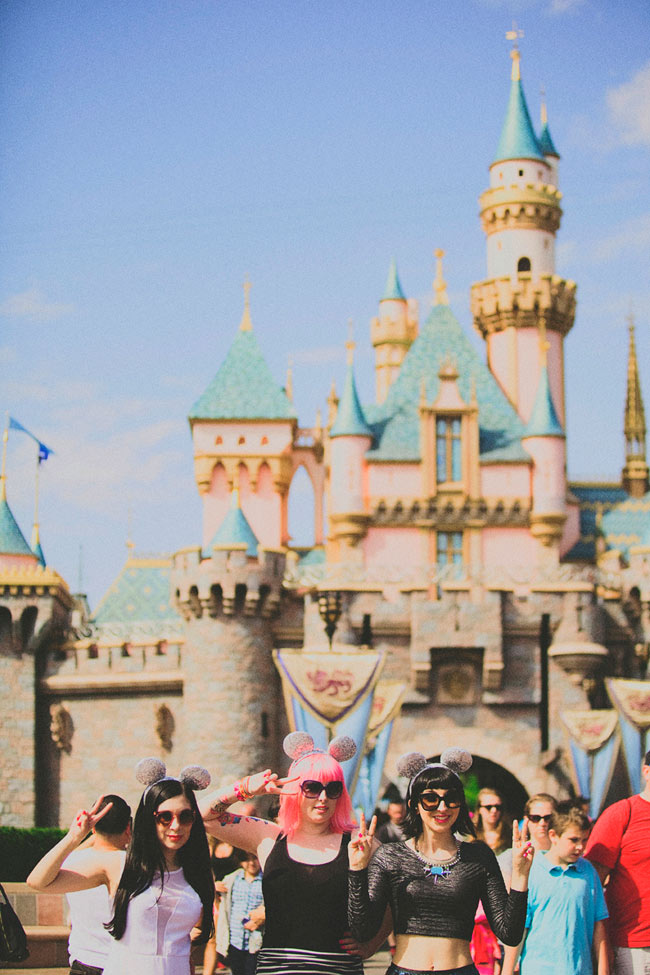 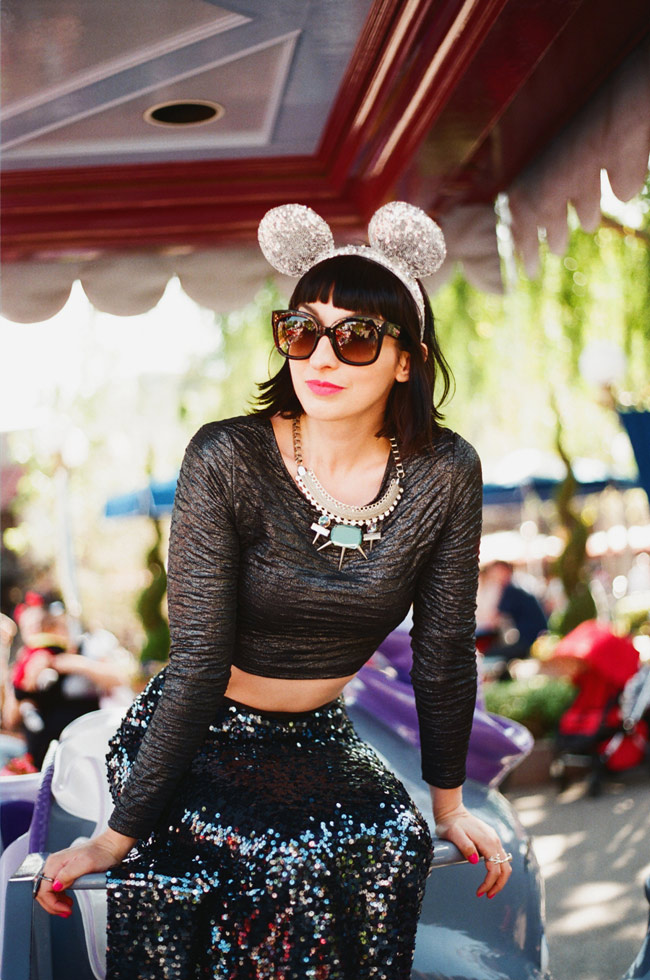 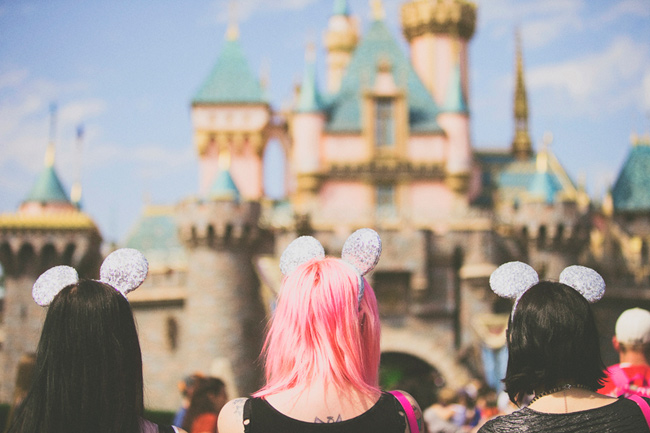 After an extremely long day, we dragged our cabooses back to Hollywood. We had trekked for miles, experienced Captain EO (at Shauna’s insistence), snacked on ridiculous things and laughed until we thought we’d burst. I hope it helped to make Kat’s birthday extra-special…

So ready to go back,

Photos by Made U Look, of course!