I’ve got a boyfriend who’s not altogether a bad dresser – what he wears is what the majority of boys in my (very warm) country dress in: big tees/polo tees paired with jeans or berms, with Nike dunks, Adidas superstars or flip-flops. But I’d love to see him dress up just a little bit more, with a bit of accessorising maybe. What would you suggest? And how would you suggest integrating these items into his daily wardrobe? S.

Well, as far as “uniforms” go (enforced, social or otherwise), that’s not a bad one, & definitely a good base. From here, anything you add is going to either make him look Weirder ™ or More Adult ™. It really depends which direction he wants to take things.

OPTION A: The Jay-Z (More Adult ™) Approach
“I don’t wear jerseys, I’m thirty plus, give me a crisp pair of jeans nigga, button-ups”. Jay-Z received the GQ International Man Of The Year award in 1995. He is credited with having redirected men’s hip-hop fashion & culture from hoodies & loose jeans to pressed jeans & button-up shirts. When he received his award, he said, “The secret is to wear the suit, don’t let the suit wear you.” He is one well-dressed bastard — the master of smart but casual. 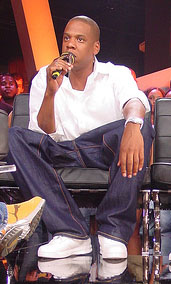 Jay-Z at Much Music. 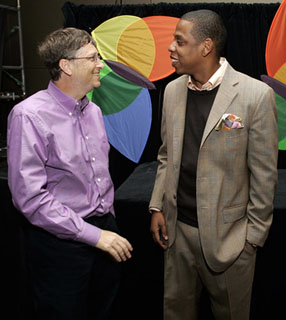 Bill: “You think you’re a pimp? I’ve got the limited edition Porsche, a few Bentleys, and I could buy a few countries. Money ain’t a thing.”Jay Z: “Yeah, but you need some dope spinners. Can’t knock the hustle.”(Thanks to Flickr for the picture & caption. I seriously laughed for a good minute.)

The most important thing in pulling this off successfully is investing in good, key pieces:

Real jeans
A nice wash & flattering cut — no underwear showing & no cuffs dragging on the ground. It is crucial that they’re kept in good condition. They need to be clean & (preferably) pressed on a regular basis.

Quality shirts
Cheap shirts & expensive shirts might look the same when you buy them, but the truth is in the wash. After a couple of spins through the machine, what you paid for them really starts to show. Cheap shirts will degrade, fade & become misshapen quickly, meaning that you’ll need to get rid of them after only wearing them a handful of times. You will actually save money in the long-run if you buy the better quality shirt. Anyway, buy a range of different types: standard style, Chinese collars, French cuffs, white, blue, subtle stripes. Also upgrade your polos — there’s nothing wrong with wearing them, & pressed they look great, but they need to be in excellent condition. Buy in a variety of colours.

Shoes
It sounds like good sneakers are already part of his “uniform”. +10 points. Remember to keep them clean! Also look into a pair of loafers (for anything other than totally casual attire) & a nice pair of sandals, too.

Suit jackets
You may only need one. It’s an optional extra but a really nice touch. Read my article on casual suit jackets for more information!

Accessories
A classy watch is really all you’ll need. It doesn’t have to be a Rolex (though that would be nice!), just try to stay away from sad, clunky, plastic, 80’s cast-offs! (Unless you want to swing the retro thing, but I’m not convinced that works with this look.)

OPTION B: The FRUiTS (Weirder ™) Approach
Well, more like street style. I’m assuming that if he’s comfortable in polos with jeans & sneakers, he’s not a particularly wild dresser, but I am willing to be surprised! It’s possible that he would love to attire himself more extravagantly, but just doesn’t know what direction to take it in. Yes, the photo below is on the extreme end of street style, but it’s just an example! 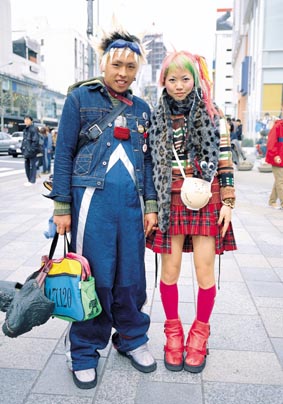 FRUiTS magazine (& books) are good places to start, but I love any foreign (especially Japanese) magazines for fashion inspiration. This Wikipedia article on Japanese fashion might be helpful too.

You can take small amounts of inspiration & accessorise accordingly. Try wearing wilder, more colourful sneakers, wristbands, hats, visors & sunglasses or go a bit mad on a haircut. The other end of the spectrum is to incorporate it into your whole image — play with colour, proportion & the element of surprise. It’s up to you.

That’s the whole thing with FRUiTS & street style — originality & individuality are the most important aspects. It’s a process of experimentation. Yes, sometimes you will look like a fooligan (clown/fool/hooligan), but that’s an unavoidable risk. One thing that might give you some direction is this article I wrote — What Goes & What Clashes? It’s a reply to a reader who wondered what could go together & what would be hideous. Often when people try to imitate FRUiTS style, they think throwing on 4 different patterns will do it. They are mistaken. Read my article & take heed!

Good luck to you & your lover-man!