I recently had a request from somebody who wanted to see more photos of my apartment in Auckland, New Zealand. The good news is, I have a lot of photos I can show you. However, most of the pictures have people in them too. I guess I didn’t think at the time that one day I would be doing an online show-&-tell of where I used to live! 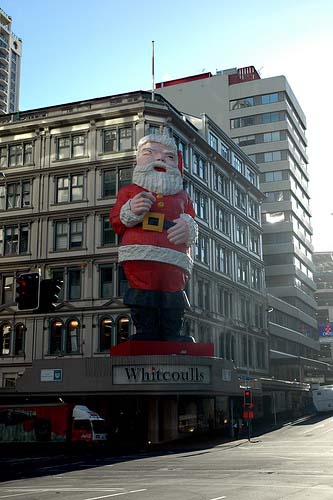 I found this photo on Flickr. I love Flickr! This is my old apartment building, on the corner of Queen & Victoria Street, smack-bang in the middle of town. The scary Santa mounted the corner for about three months a year. I was not on the corner blocked by him, thank god. I was on the other side, facing downtown. 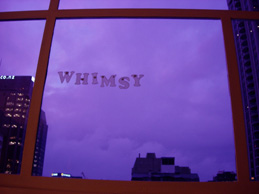 The best thing about my apartment was that it had this huge window which took up most of one wall. Because of this, the whole place (it was a studio) was always bright & light. In terms of living somewhere, abundant natural light is so, so brilliant. Anyway, this photo is part of that window. I had some glow-in-the-dark letters which I would stick to the window to spell out words, & often I would grab a whiteboard pen & write things on there too — quotes, ideas, etc. For months, I had “Never fear being vulgar — only boring”, a Diana Vreelandism, written in cursive high up the window. 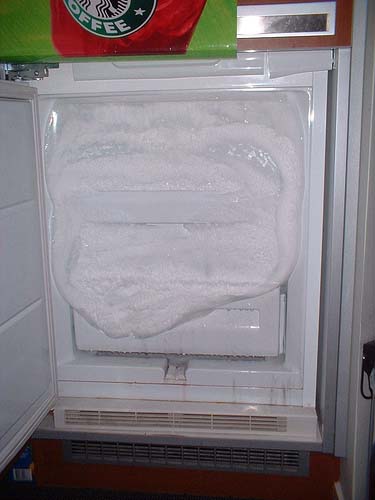 The worst thing about my apartment was the freezer. Yes, that’s my freezer — BEFORE it got really bad. Seriously. The freezer, which came with the place, had a crappy seal which resulted in major problems. It was pretty useful when people came over for drinks, though — I’d hand out knives & tell them to carve themselves a big hunk of ice for their glass. The Starbucks poster, “obtained” for me by a boy, was stuck to the door & made it look much better. 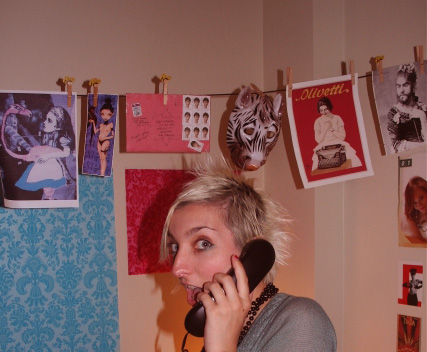 So, here I am on the telephone when I had a whole lot of people over. You will notice that the lighting is a bit dim — that’s because I am lamp-obsessed. I had four in my apartment (roughly, one in each corner) & they created a brilliant atmosphere. The printed paper on the wall behind me is gift-wrapping paper which I really liked. Above me is a length of rope tied to a hook on the wall (3M adhesive!) which I pegged things onto. From left to right, a stencil of Alice in Wonderland; an illustration by John John Jesse; an envelope from my friend Kaia; a zebra mask (this will make another appearance later in the article); an old Olivetti print (bought on Ebay) & a picture of a bearded lady (from a book about P.T. Barnum). On the wall on the right, I have a picture of Mary-Kate (!), a postcard of the Night Porter & a postcard for a Dada night in New Orleans. 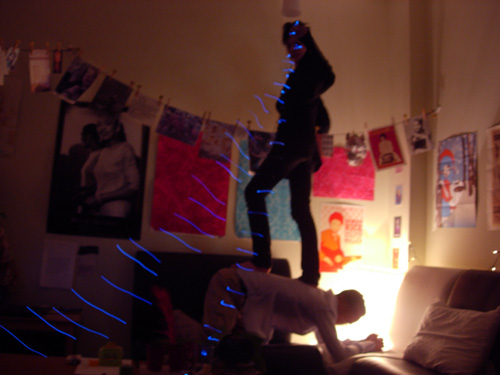 This is from one night when my friend Ana came over & decided to create a canopy of blue above my bed. She is standing on my boyfriend’s back wrapping blue fairy lights around a hanging light fixture. (Not totally practical but it was great fun.) You can see more of my kind of “living area” set-up here. I had two black couches & two white chairs, covered in vinyl with silver feet. They reminded me of old bus seats, I loved them. 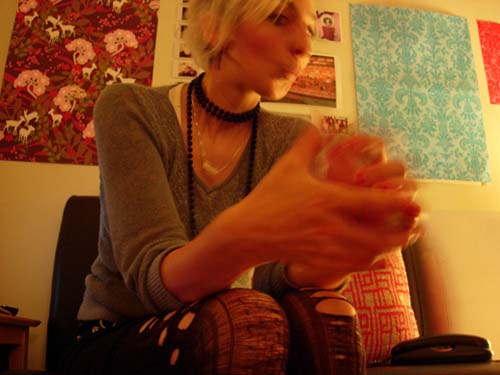 To my left is a little table that my laptop lived on. To the left of that was a huge stereo cabinet which I covered with a blanket which was made of art-deco style fabric. I didn’t want the ugliness of my hi-fi on display. I stored a typewriter on the top. The observant among you will notice that the Billie Holiday poster is missing. I changed the contents of that wall around a lot. 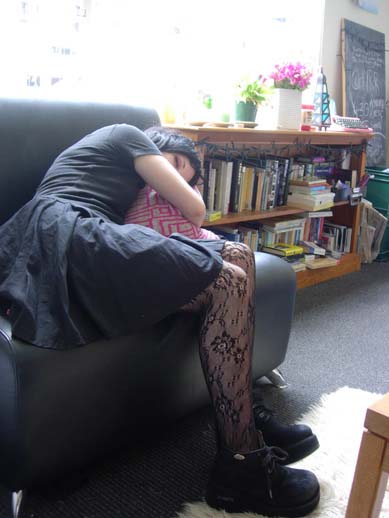 Jennie came to stay. She is taking an imprompu nap. Notice the pink cushion she’s hugging — I had a whole lot of them, some on the chairs, some on the bed & two lamps on either side of the bed in the same colour. It was so cute. She’s sitting in front of the big window mentioned previously. That’s my grandmother’s bookcase, with candles, plants, lanterns & typewriters on the top. I stuck pins in the corners of it so I could wrap fairy-lights around it, which made it look really cute at night. In this shot you can also see my flokati rug, the edge of my coffee table, & at the far right, my collection of old newspapers & a blackboard. 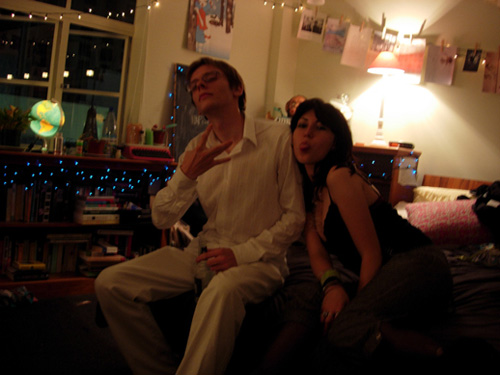 Thugs on my bed! The edge of the window (it went all the way up to the roof, & the place had really, really high ceilings), another bookcase & my bed. I had another line of rope going behind my bed for pictures. On the side of my bookcase you can see a white piece of paper — it’s an email from my mother which I really liked. I’m such a goob. 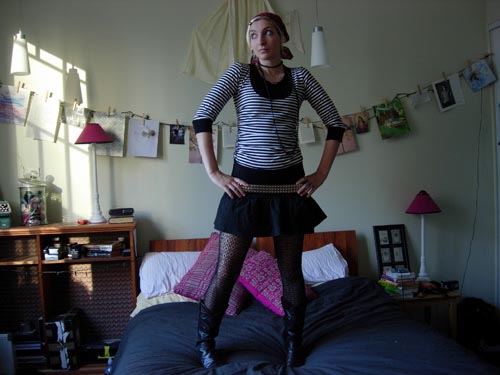 A rejected daily outfit photo, but you do get to see my bed. Some of you will recognise this from my more recent pictures in Melbourne. It’s a very comfortable bed, let me assure you. On the far left is ANOTHER typewriter (I collect them), & you can see the pink lamps/cushions I mentioned earlier. Also next to the typewriter is a cookie jar full of accessories. The pictures behind me include some pages ripped out of a shabby chic book, a photo by Roxanne Carter, a holographic postcard of Jesus, an ee cummings poem, a quote from Bukowski, etc. Also, the weird thing behind my head is a yellow dress which doesn’t suit me. It looked great pinned to the wall, though. On the bedside table to the right is a framed selection of Lemony Snicket’s misfortune-telling cards & a whooole lot of library books. 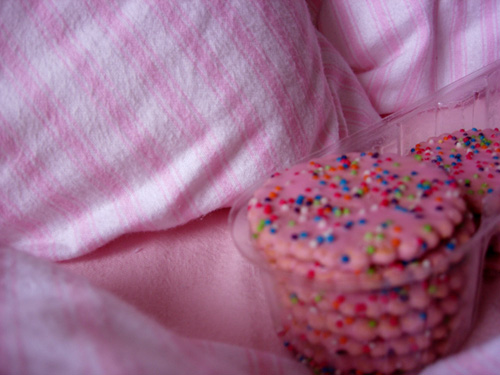 Here endeth the tour! I hope you enjoyed it ;>