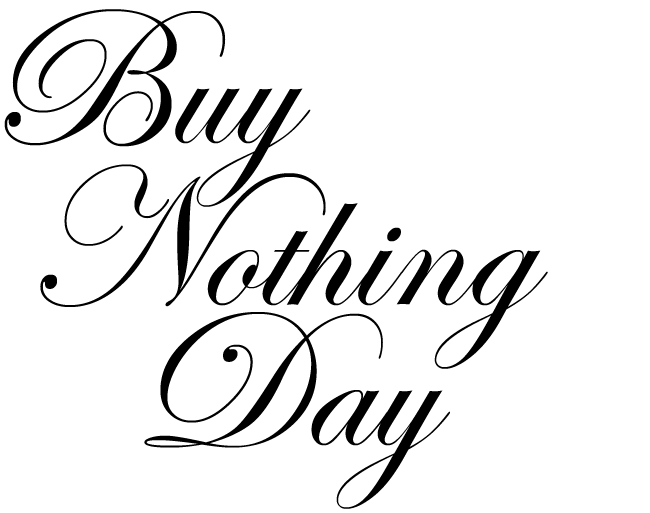 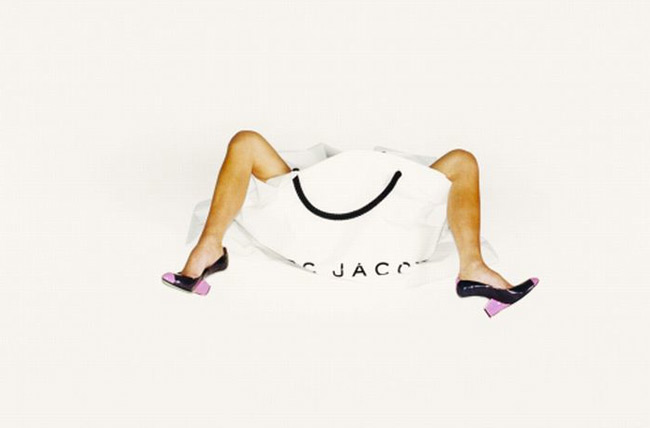 It’s 2am in New York City. In an hour, alarm clocks will start chirping, singing out from the darkness, encouraging eager consumers to shower, get dressed, & pile into their cars for the epic shopping event of the year: Black Friday.

Black Friday is similar to Boxing Day in other countries, but of course, America always has to do it bigger & bolder…

“In many cities it is not uncommon to see shoppers lined up for hours before stores with big sales open. Once inside the stores, shoppers often rush and grab, as many stores have only a few of the big-draw items. Injuries and even fatalities are reported. On Friday, November 28, 2008, Jdimytai Damour, a worker at a Walmart in Valley Stream, New York was trampled to death by shoppers who broke through the store’s glass doors minutes before the store’s scheduled opening at 5:00 a.m.; a pregnant mother was hospitalized from injuries in the same human “stampede”, though early reports of a resultant miscarriage were determined to be in error. On that same day, two people in Palm Desert, California, were shot and killed in a Toys “R” Us store during an argument.” (Wikipedia)

THAT IS MADNESS. People are killed just because some chump wants to get a good deal on a car stereo?!

I love shopping as much as the next person. We ALL know that. But I think it’s important to investigate the things we do, & the habits we maintain, so that we can be fully conscious of our decisions. I also really want to use this blog–this platform that I have–to do something good. So instead of giving you a rundown of all the best, biggest, brightest bargains this Black Friday, I want to encourage you to participate in Buy Nothing Day.

The first Buy Nothing Day was in Vancouver, Canada in 1992, & has since become an annual phenomenon, celebrated in over 65 countries. The fact that it falls on Black Friday–the “biggest shopping day of the year”–is no coincidence. Buy Nothing Day is about taking a pause, really thinking about the things we buy & the consequences of those actions.

“For 24 hours, millions of people around the world do not participate — in the doomsday economy, the marketing mind-games, and the frantic consumer-binge that’s become our culture. We pause. We make a small choice not to shop. We shrink our footprint and gain some calm. Together we say: enough is enough. And we help build this movement to rethink our unsustainable course.” (adbusters.org)

Shopping can be just as much of an addiction as drugs, sex or alcohol. It can be an extremely effective way of getting a temporary, short-lived adrenaline rush, a kick which distracts us from whatever else is going on in our lives. We all know how good to feels to snag a bargain, but when you find yourself relentlessly chasing that thrill, it could be that you’re trying to mask something else.

It’s taken me a while, but I am now very aware of my own shopping habits. I am totally guilty of compulsive–& completely unnecessary–shopping, especially when I am feeling unfulfilled or anxious in some other area of my life. It’s all too easy to trawl for treasures online, or schlep all over Soho for things I don’t really need, but want anyway. It is still something I deal with.

The advent of sites with super-sales & clocks which tick down, forcing you to make a purchase within x number of minutes, all add to the pressure. While we have to take personal responsibility for the choices we make, websites like this definitely make compulsive shopping a socially sanctioned activity. It makes it easier to excuse our own behaviour–it seems “normal”.

I’m certainly not trying to include everyone in my argument against Black Friday. There are enormous sections of the population who cannot afford to buy anything at all, regardless of the discounts & bargains offered by mass retailers, & there are other consumers who, if not for Black Friday, would have a very barren holiday season. In encouraging people to opt out of this ravenous consumption-fest, my intention is not to belittle or trivialise the plight of anyone who is in a tricky financial spot.

I’m really talking to the people who are fortunate & blessed enough to have a little money left over every month after they pay their bills. If you’re lucky enough to be in this camp, I urge you to take a minute before you whip out your credit card, & consider your spending habits.

The truth is that most of us already own more than we will ever need. Do you really need to wake up at 4am to get a bigger television set? I would argue that you probably don’t. Just because something is on sale doesn’t make it a good deal.

I choose to participate in Buy Nothing Day. It may not be an earth-shattering decision, but for me, it is a step in the right direction. Maybe it will be for you too. 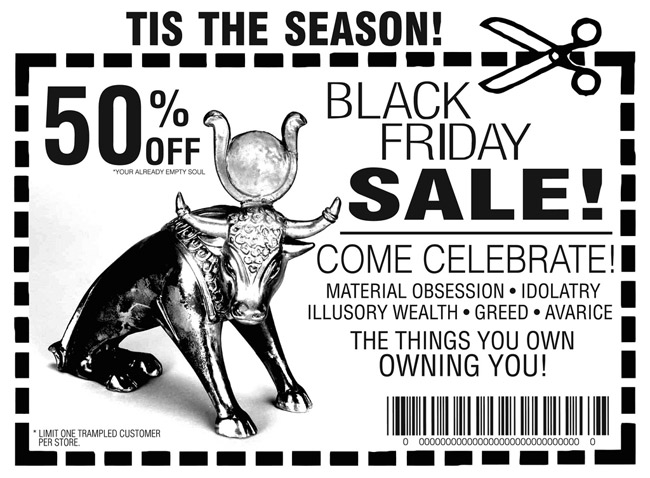 Image by This Is My Name. 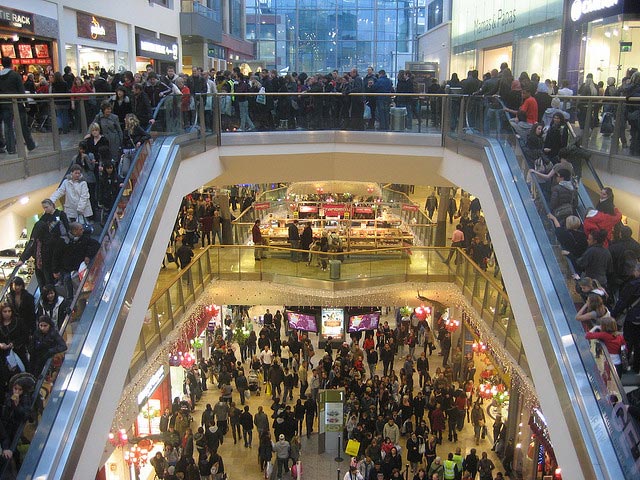 Go through your closet & move all the wonderful things you barely wear to the front. Use some of those eyeshadow palettes you’ve hardly touched & experiment with some new looks. Donate old clothing to a church or community centre. Clean out your fridge. Sleep in. Walk your dog. Go to a yoga class. Bake a cake. Have a mid-afternoon nap with your lover. Unsubscribe from the newsletters that you get at noon which tell you about all the online sales. (You know the ones.) Volunteer. Play in your garden. Invite a friend over for tea. Re-read your favourite book. Research the city you’re dying to visit. Go swimming. Give yourself a sparkly manicure. Take a family portait. Eat a slice of watermelon. Photograph the sunset.

Extra For Experts: Buy Nothing Day on Wikipedia has a little bit of the backstory, as well as some arguments against it.

Some things to do instead of shopping from Keri Smith.

Watch The Story Of Stuff.