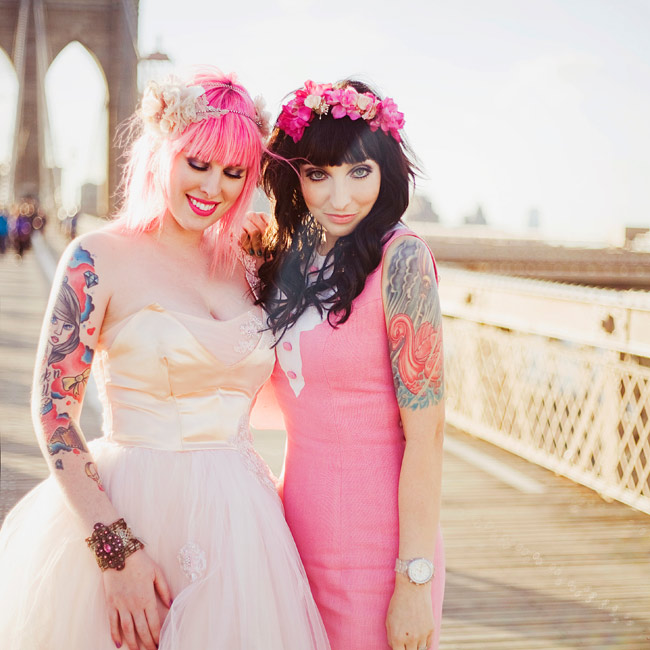 Since none of the girls had seen it before, Kat, Christina, Marielle, Alie & I headed over there for the grand finale on our day of shooting. We started out in the East Village, taking a few snaps while we waited for a cab… 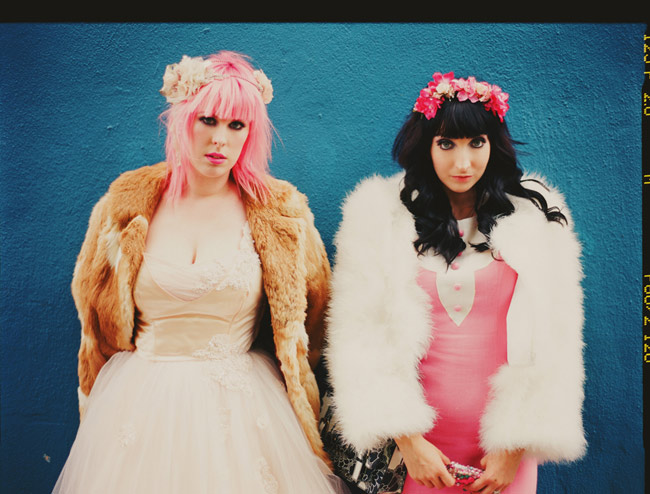 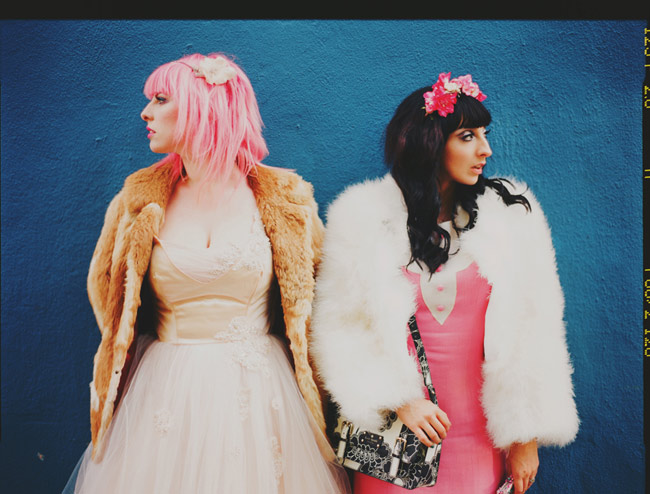 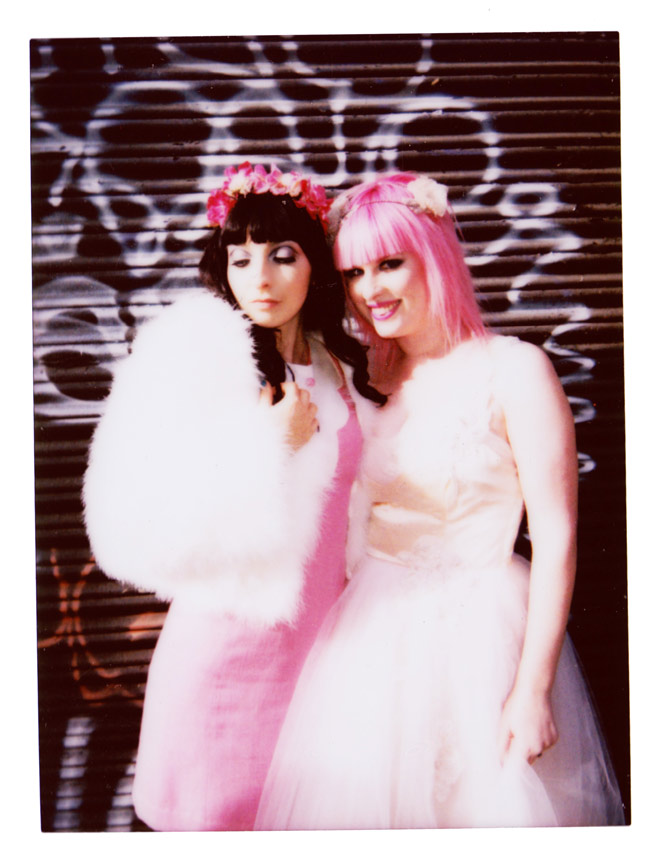 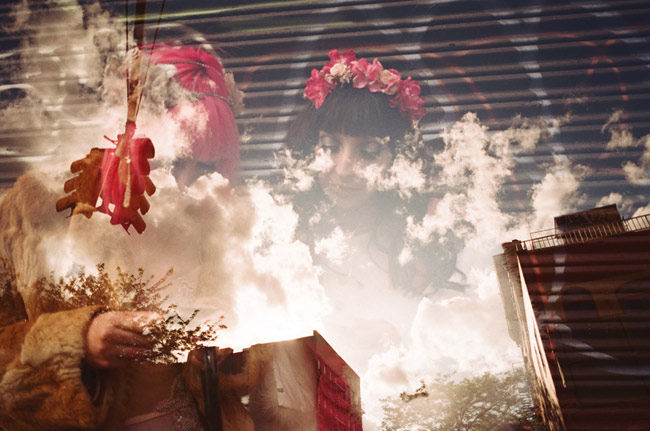 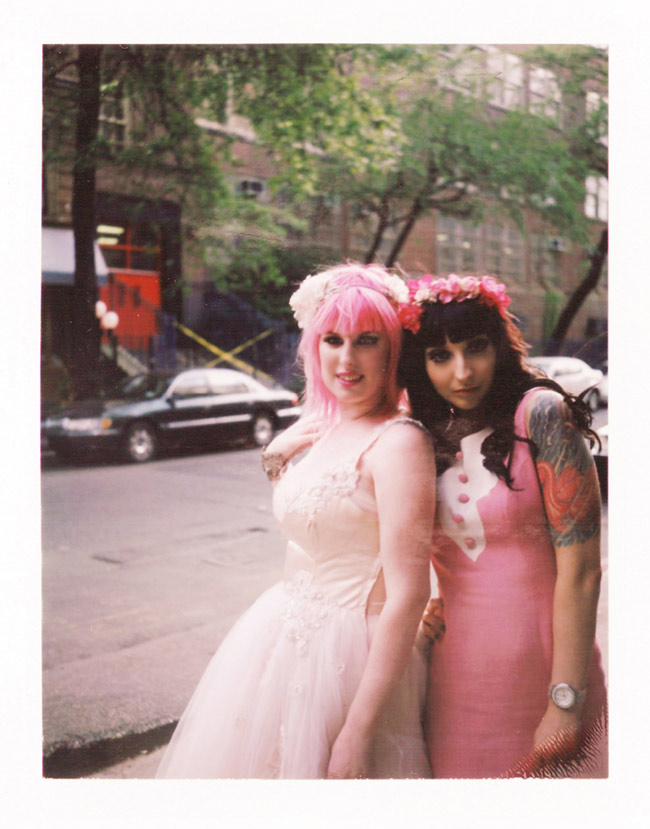 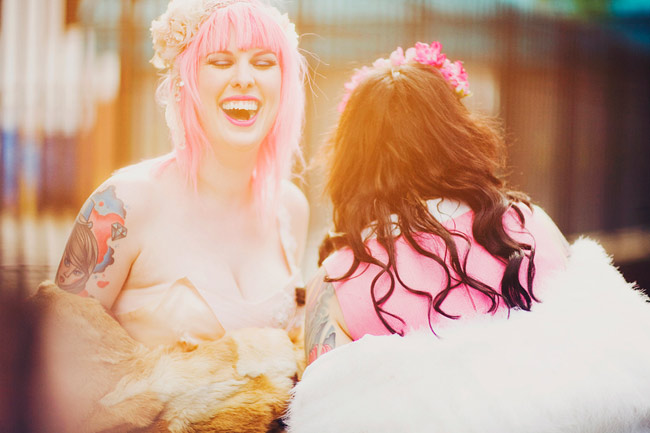 Before long we were in Brooklyn, making the hike over to Manhattan. People forget that New York City is a series of islands. Before the Brooklyn Bridge was built, the only way to get from borough to borough was by boat!

The history of the bridge is fascinating. When it opened, people were so excited that there was a stampede which killed 12! Many others doubted the stability of the bridge, so P.T. Barnum — in a fantastic marketing twist — had his prize elephant, Jumbo, lead a procession of 21 elephants across it!

The Brooklyn Bridge was originally used by horse-drawn carriages & trolleys, but these days, it carries 6 lanes of motor traffic in addition to its pedestrian walkway. It’s an incredibly important piece of New York City infrastructure, since it’s one of the only ways to get to or from Brooklyn when the subways stop working. Thousands of people walked over it to get home on September 11th 2001. 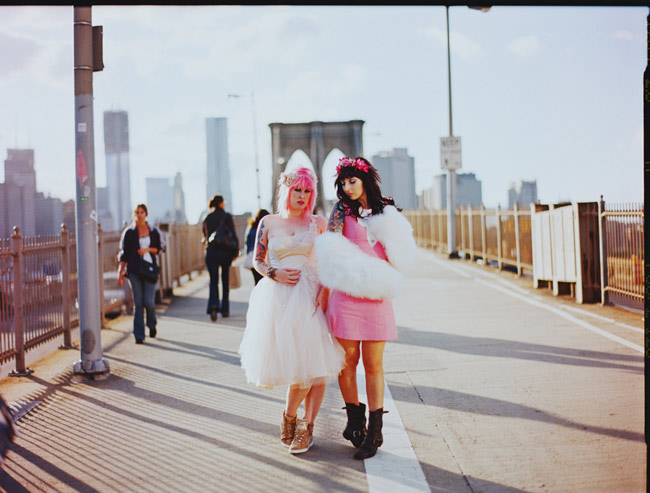 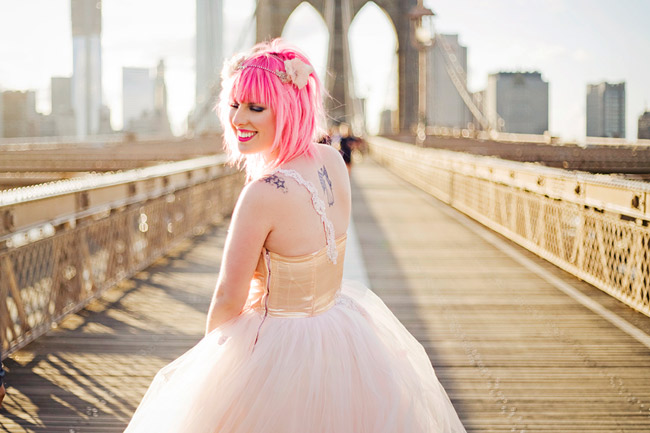 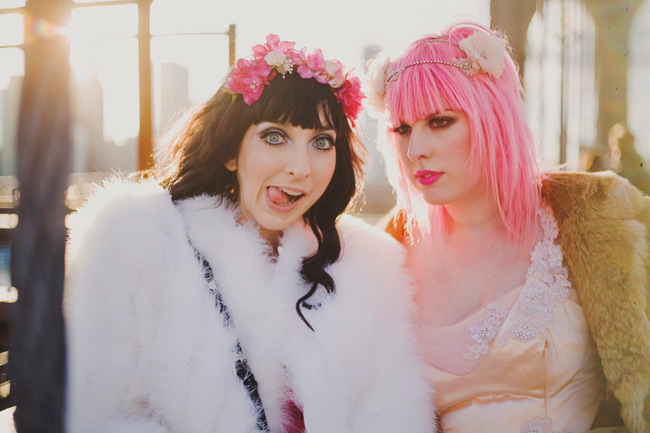 We had such a good time taking these photos. It was the end of a very long day, & even though we were exhausted, walking across the bridge at dusk gave us all a last little burst of energy. It was the perfect end to our day. 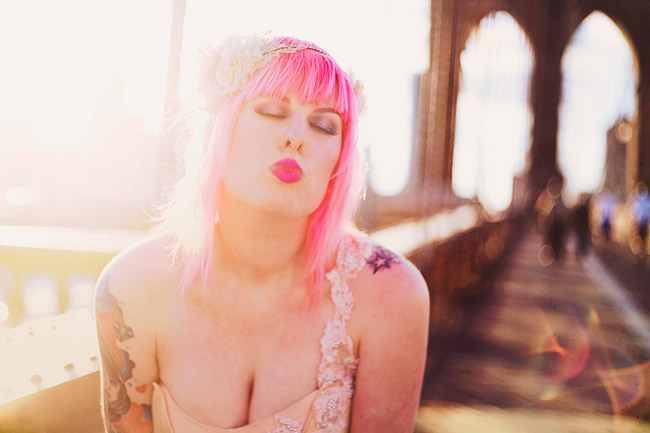 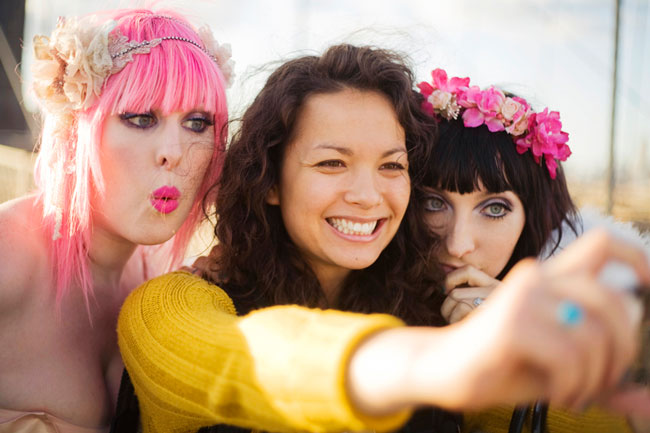 The pedestrian walkway of the Brooklyn Bridge is truly crazy. There’s a white stripe painted down the middle, & it’s clogged with meandering tourists & aggressive cyclists. The people on bikes race down the other side of the bridge at top speed, & good luck to anyone who gets in their way!

We were really lucky to get some photos without many people in the background. I don’t really know how we managed, since it was absolutely packed with foot-traffic! Maybe it’s just an optical illusion caused by the hugeness of our dresses & coats! 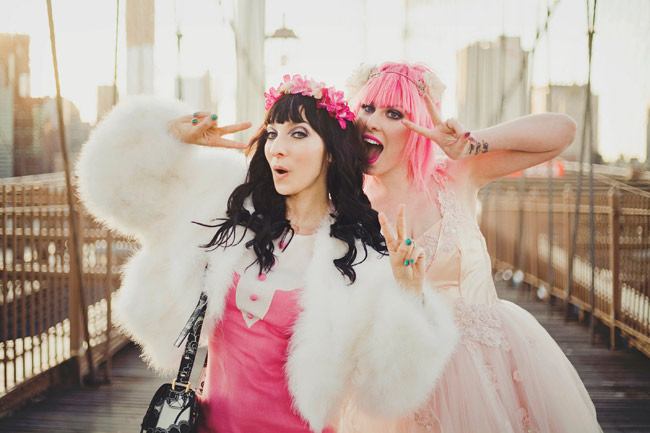 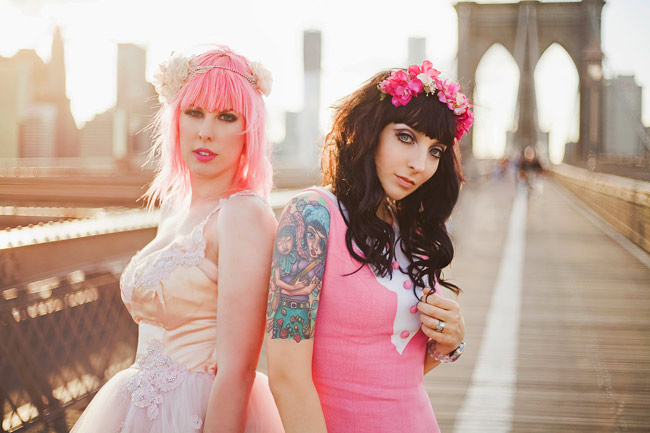 A flower wreath by Which Goose 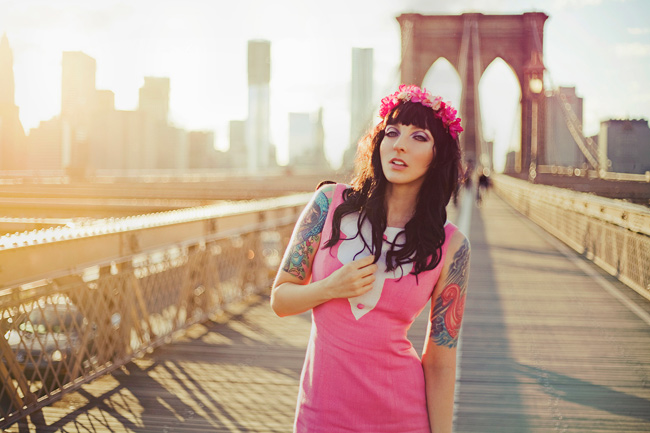 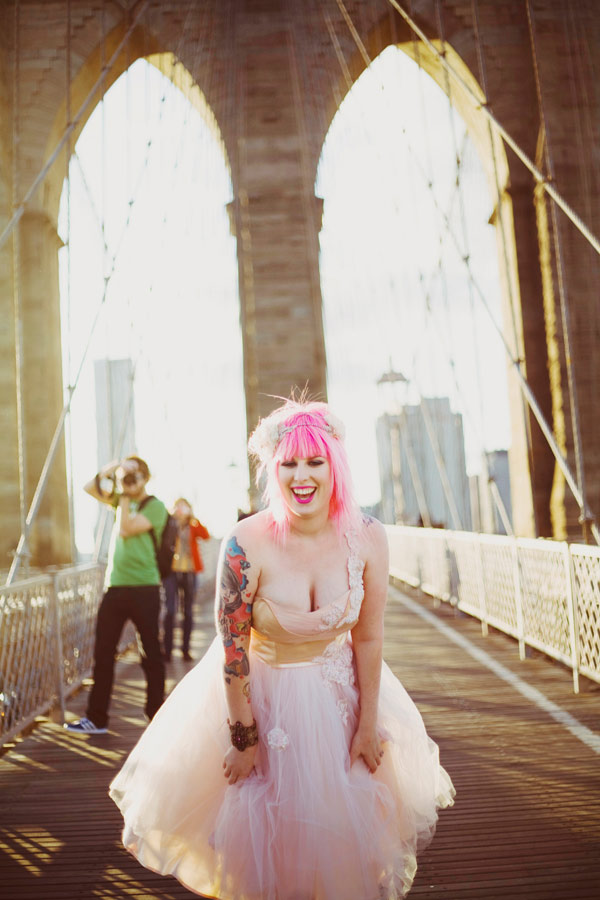 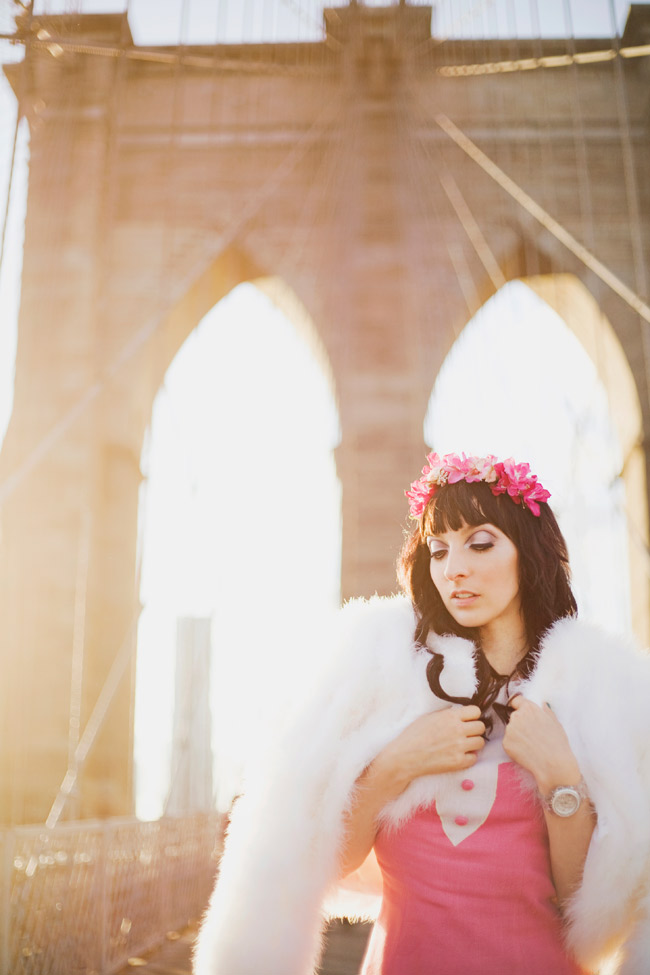 I travel a lot & I rarely do the tourist route. I’m not big on being a “tourist” anywhere; mostly I think tourist attractions are overhyped & a waste of money. I would prefer to see what it’s like to really LIVE in a city. But if you come to NYC, walking the Brooklyn Bridge is a must. It’s iconic & gorgeous, with some of the best views in the city. Do it early in the morning or at sunset; it’s sublime.

Be sure to stop off at Grimaldi’s & — if you have room! — the Brooklyn Ice Cream Factory, too! We ate at those two places after our wedding. In fact, we cut a Grimaldi’s pizza together instead of a wedding cake! Aw! 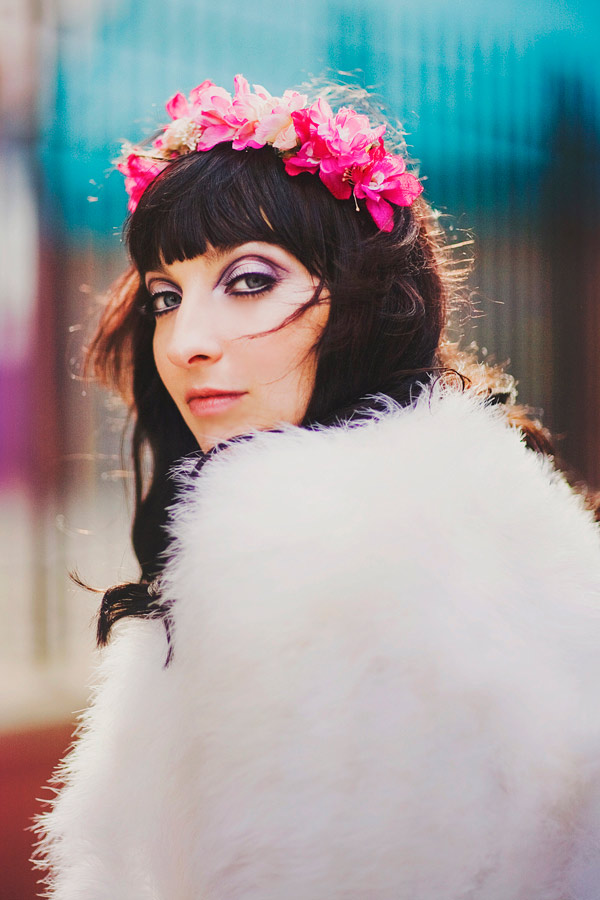 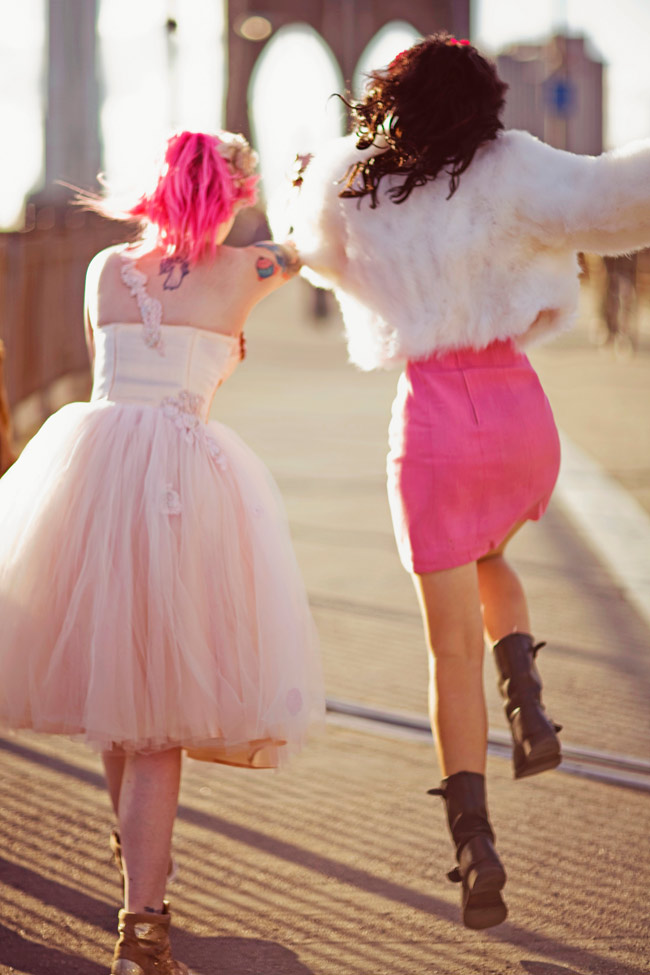 If you’re not yet sick of looking at Kat & I (!!!), here’s some more! I love this video of Christina, Marielle & Alie’s trip to NYC. The first half is Kat’s shoot with Gareth (SO CUTE), & from 3.30 it’s the two of us! I love the atmosphere conveyed in this little film.

As always, MAJOR LOVE to the Made U Look babes, to Regan Rabanal for the beautiful make-up, & of course to Kat for being my partner in crime… & a gorgeous person in general!

« 100 Things To Do Instead Of Procrastinating On The Internet!
Things I Love Thursday: Miss Muck! »