BYO Fangs: A Night At The Vampire Ball 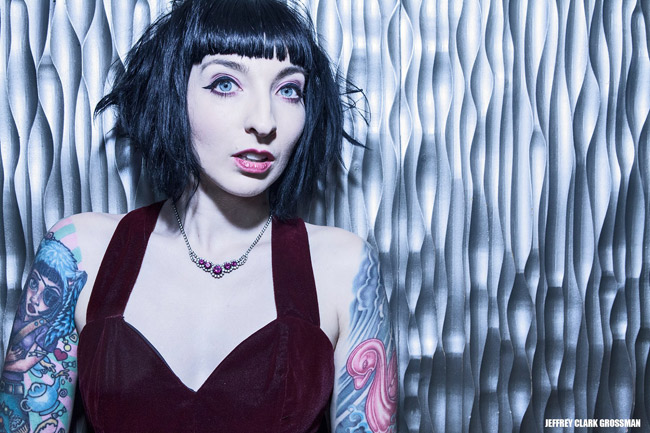 I was walking along 14th Street when I got an email from my friend, Rabbit.

Subject: vampire ball tomorrow night?
Okay, so I think I am going to this ‘vampire ball’ tomorrow night… It’s called Endless Night. Would you care to be my teenage goth date? Image of me down on one knee, presenting you with a ring box containing a spider

My reply was instant.

Subject: Re: vampire ball tomorrow night?
OMG YES. What the eff are we gonna wear?! The next night, I stared in the mirror, teasing my tresses as I sprayed them with extreme hold hairspray. It was easier than I thought to slip back into that old ritual: thick eyeliner, multiple coats of mascara, wine-coloured lipstick and plenty of powder. Finally, I laced up my platform boots, wrapped myself in a black coat, and headed out to greet the night.

I was a heady mix of nerves and gut-twisting-weirdness as I stood in the line outside the venue. At the same time, I was instantly transported back to my goth persona that I had perfected over 10 years of dabbling in the dark side.

When Rabbit appeared, I told her, “Just so you know, my goth persona is really mean.”

There’s something about painting those sharp lines around your eyes that makes you want to narrow your gaze at everyone.

We explored the space: three floors with multiple dance floors and performances. On the basement level, children of the night were writhing and twisting to industrial beats. Overpriced drinks were being poured, absinthe rituals were being observed, and the Goth Top 40 was blasting. (Depeche Mode! New Order! The Cure!)

Endless Night was teeming with goths. They were everywhere, limbs flailing while they danced, long pointy fingers wrapped around plastic cups. We saw goths of every size, shape and colour, of every genre and sub-genre and motif you can imagine. Women in decadent ballgowns twirled around men in tight PVC pants. Capes and fangs flashed in the light, top hats and wigs loomed over the masses, and shaved-off eyebrows and white contact lenses were de rigueur. There were also some men dressed like pirates sailing on the SS Hot Topic. There’s a few in every crowd, I guess!

On the Endless Night website, in bold, italic, underlined text, it says, Fangs and masks are highly encouraged but NOT required. I never was one for a dress code, but I was also running pretty low on anything that might qualify as gothic chic. (I had gotten rid of my striped tights, New Rock combat boots, long lace skirts and fishnet shirts when I left home.)

I had slithered into a plum velvet skater dress from the 90s, with black stockings and my boots that elevated me to 6’1″. I spun around the dancefloor, sucking on gin through a tiny straw.

Rabbit looked like a baroque painting, but even more pale. A fascinator on her head, skinny limbs encased in pale lace, she flicked open a fan and fluttered it in front of her face. 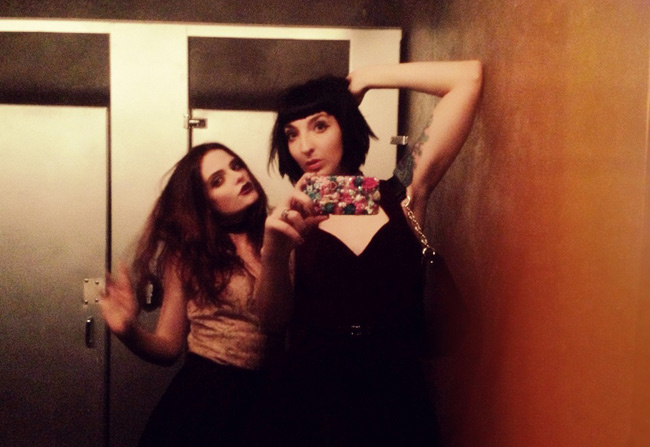 From the VIP section, we looked down at the crowd and I pointed out a man whose hair was shaped like a teardrop on the top of his head. Later, as Rabbit and I writhed to Type O Negative’s Black No 1, he approached us. He must have been 7 feet tall. He was wearing a slippery latex catsuit, his nails filed to a point and painted a red to black gradient. He boogied into my eye-line, and started to dance as he stared at me, mouthing, “Black, black, black, black, number ooooneeeeeee!”

We started talking in that weird way you talk to people in clubs: half-shouting, only understanding half of what’s said. He was from Greenwich, Connecticut. I had a fantastic vision of him taking the Metro-North train in his greasy onesie, so I asked how he’d gotten into town. He said he drove; that his car was “all blacked out”. He mentioned that the people at Starbucks gave him free coffee.

“I like you,” he blurted. He told me we should get married. When he went to the bathroom, I escaped.

He was sweet and well-intentioned, I think, and he was also really the only person who approached us. Rabbit turned to me later in the night and said, “Why aren’t more people talking to us? This is totally weird. I get hit on more at my local bar in Williamsburg than here.”

“Rabbit!”, I replied. “Goths like to lurk, they want to be seen as mysterious. You can’t be spooky and introduce yourself to everyone in the room like Bill Clinton. They will never approach you. That’s why they just stand in the corner trying to look enigmatic, so someone will approach them.”

Even so, there were far fewer pick-up artists than I expected. Rabbit wanted to know what made modern goths tick. We started walking up to people, engaging them in conversation, trying to get a little insight. I pointed at a guy and said to Rabbit, “How about that one, wearing the carpet?”

More fool me. He wasn’t wearing a carpet at all. It was a priest’s robe from the 1960s. He was an Italian map-maker living in Harlem. He was carrying a one-of-a-kind personally-moulded mask, but it didn’t really look anything like him.

He told us that he loved the old music from the goth scene. He remembered back when goths and punks and weirdos of all kinds hung out together, and he missed those glory days.

Since I was fascinated by everyone’s mode of transport that night, he told us that he had taken the subway from Harlem, and that when on the train, he turned his colourful outwear inside out. The cape was black on the inside, just like the soul of everyone in attendance. (Ho ho! A little goth humour.) He was friendly and drunk and shy, unlike the belligerent guy in a pinstriped suit we spoke to next.

At 3am, we decided we had probably seen everything we were going to see. We had witnessed a woman in a ballgown and corset spanking another, we had been followed across the dance-floor by a guy in corpsepaint, and we had angered the aforementioned pinstriped suit-clad pick-up artist when we pressed him to tell us exactly what he liked about goth girls.

We collected our coats and took a cab to Veselka, a famous 24-hour Ukranian diner in the East Village. Over eggs, kielbasa and sweet potato fries (which I stole from Rabbit’s plate), we dissected the evening, trying to figure out what had just happened, and perhaps more importantly, why we enjoyed it so much.

There’s something liberating about doing an activity that would have thrilled you as a teenager.

No matter how long it’s been since I kissed the subculture goodbye, there’s still something about it that calls to me. Deep down inside, I still think of myself as that weirdo goth girl.

When I’m shopping, I always look at the black clothing first.

Going to the vampire ball was a way of cherishing my inner teenager. When I was 15 years old and spending my entire weekend hanging around Cuba Mall carrying a lunchbox and wearing stripey tights, the idea of going to a goth party in New York City would have been beyond my wildest dreams.

I remember sitting at my computer (with its 33.6kbps modem), reading every goth site I could find. I would soak up the information with my eyes. I’d read every thread on alt.gothic and alt.gothic.fashion, I’d learn gothic home decor from Gothic Martha Stewart, and dream of one day being a Gothic Babe Of The Week.

Wellington’s goth scene was small, to say the least. The people who organised the events did a bang-up job, and bless their cotton socks for that, but it was always the same 50 people. I guess it’s like that in any city: the scene has its key players, and after a while, it all starts to look the same.

It was incredible to realise that — as with any subculture, I suppose — goths look the same, from New Zealand to New York. Everywhere I turned, the faces, the clothes, the behaviour felt familiar.

Goth fashion hasn’t changed. Cybergoth arrived on the scene with a neon shout, and steampunk creeped its way into the dark consciousness, but in general, corsets and big voluminous skirts are still all the rage. In fact, nothing about being goth has changed… Except that these days, it’s even less common.

And maybe this is a function of a subculture becoming even more fringe. Even Hot Topic doesn’t cater to mallgoths anymore; they have all but disappeared. Seeing a goth in NYC is an unusual occasion, like spotting a rare bird.

There are so many more ways that teenagers can rebel these days. Dressing in black and listening to Sisters Of Mercy is nothing compared to popping pills, taking your clothes off for some sleazy photographer, and becoming an internet “it girl”. How worried can a fishnet shirt really make your mother, when you could be embroiled in some Gossip Girl-esque scandal?

Honestly, it makes me glad that wearing striped tights, reading Anne Rice and scowling at people was how I occupied myself from ages 13 to 20. It could have been so much worse. I was surprised by how comfortable I felt at the ball. It was like putting on an old uniform, with worn buttons, and a jacket that has softened at the elbows. It wasn’t a stretch of my personal limits to powder my face, to tease my hair or to stand outside the club, eyeing everybody.

I may have moved on from only wearing black and listening solely to music that came out 20 years ago. But I love to go out and celebrate that lifestyle, which, no matter how much I may deny it, will always be a part of who I am.

These days, I look back at it with a sense of humour. That’s the difference: when you can laugh at yourself, it becomes so much more fun. There’s nothing like dancing to The Cure, Type O Negative and Nine Inch Nails, waving your arms in the air and sneaking off to the bathroom to tease your hair (again).

I always look at goths fondly. After all, everyone I’ve ever adored was one, once.

« Blog On, Babe: Go Your Own Way!
Palmistry 101: A Guide To Palm Reading For Enchanted Babes! »