Carousel: Madonna In Alphabet City, Surviving When Everything Sucks, & The Ghosts! 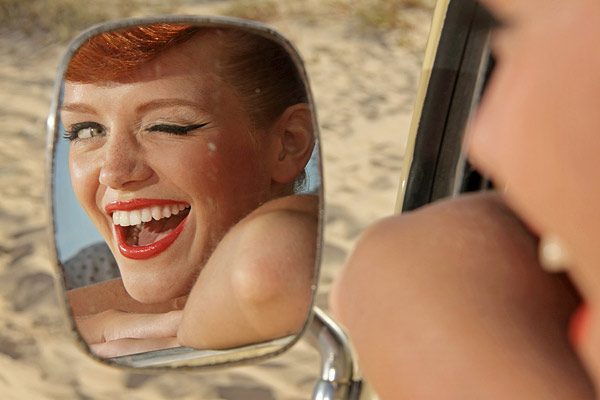 Oh yes, it’s finally here! We’re on the precipice of another beautiful weekend, & I couldn’t be happier!

To ease you into it, here’s a collection of some of the best things I’ve read or watched this week. I think you’ll enjoy them too!

I love Alex’s post on how to survive when everything sucks!

On Twitter, ‘What a Party!’ Brings an Envious ‘Enough, Already!’ from the New York Times. Yeah, I have to say, it was weird to see the mix of “Yay I’m having so much fun at SXSW!” & reports of the death toll rising in Japan…

Yes!!! I love Tyra & Andre’s take on the trenchcoat! (You do know I mean Ty-Ty Banks & Andre Leon Talley, right?!)

I Shot Madonna: exclusive photos of Madonna taken in the 1980s when she lived in Alphabet City (my neighbourhood!).

So I got this girl’s number and called. It was Madonna. At the time she was living in Alphabet City, and she suggested I go to her apartment and chat about what I wanted to do. I had to call her from a phone booth across the street, because the neighborhood was full of drug dealers, and they didn’t let people just walk in and out. There was a group of kids outside the building, on the stoop, in the hallways, and when I said I was there for Madonna the seas parted. I looked up the staircase, and I saw this girl leaning over the edge of the banister, and even from three stories below I could see these catlike eyes just looking down. I knew at that moment that she had something special — I really did. … She served me a cup of coffee on a silver tray with three pieces of Bazooka bubblegum. There was no pretense to it. When I came back a few days later to shoot her, she said, “You know, we should go up to the roof because I go up there with all the kids from the building.” She was like the Pied Piper of the neighborhood — they loved her. They followed her, they danced with her, they sang with her. It was something they did on a daily basis, and it was remarkable. We just walked up and they gathered around. She put the boom box on — it was her music, though I don’t remember which song — and they just started dancing and singing. She was so alive and unpretentious. She was fierce, determined. Nothing was going to stop her.

Sridevi dropped me a little note to let me know of the existence of DESIGNTRIPPER, which combines two of my loves: great design & world travel!

Home shrine maintenance tips from Mystic Medusa. If you want to make an altar, have a read!

This I Love Tim Burton photoshoot is SUBLIME-O-RAMA!

If gluten makes you feel sick but you’re not celiac, this article may shed some light on the issue!

HAHA! Helen sent me this link to photos of basset hounds running. So funny! They look like swamp monsters!

I just found out about the irony mark in punctuation, & it delighted my geeky impulses!

I am so bored of nostalgia. Of letterpress and braces and elaborate facial hair. I appreciate these things, but I think there’s something wrong with a culture that fetishises them to the extent that we currently do. // As if authenticity is only to be found in the past. I think we are frightened and I think we are distrustful and we are worried that things are slipping away.

I also really enjoyed stop lying about what you do:

The same impulse can be seen in the endless lies we tell others about ourselves, half-believing them. As a vegetarian (uncaring, unsentimental), I get this from carnivores all the time, it’s oddly pervasive. “Oh, we don’t eat much meat at home.” “I could give up meat.” “I’m almost vegetarian.” // “I don’t watch much TV” is the other one, when you tell people you don’t have a TV. (I don’t have a TV. I watch a bit of TV on the internet. I lie about how much. I’m lying now.)

Anyone remember way way way back when I wrote about the zipping up technique? Here’s a video which demonstrates it! Donna Eden is fantastic, I never knew about her! Here’s her five minute energy routine. She is so smiley!

Anna Wintour on Rumors About Her Reputation, John Galliano, the Internet, & More from New York Magazine.

How a sex rebel was born. Susie Bright talks about her sexual awakening, feminist hypocrisy — & where the sexual revolution went wrong.

I love this Dr Seuss installation outside the New York Library!

Always wanted to know how to tie a sari? Well, now there’s even an app for that!

6 ways to revamp your sluggish career via CNN.

Um, wow. People Are Awesome: This Guy Scuba Dived Into the Tsunami to Rescue His Wife & Mother.

Working For Yourself: Month Two (Getting Focused) is totally sane & true.

If you want to contribute something positive to the world of art, consider funding Molly Crabapple’s animated film!

The GHOSTS from Eddie O'KEEFE on Vimeo.

Have an incredible weekend — make it count!