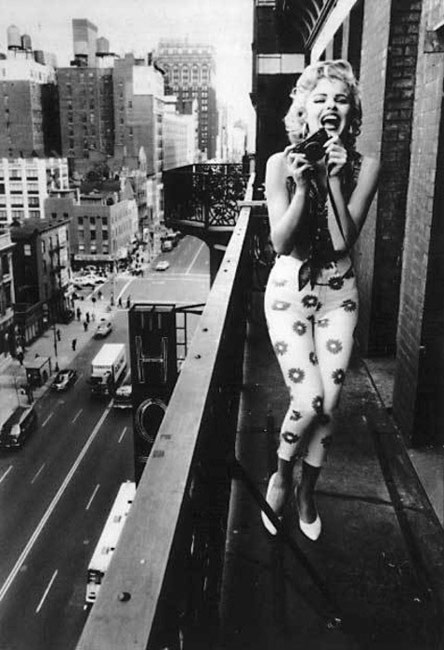 So inspiring! Patricia Field Invents a New Holiday at Her Valentine’s Ball, complete with slideshow of well-dressed revelers!

When you make something no one hates, no one loves it, an illustration by Chris Piascik! Plus, the quote below it is excellent.

Sunday Life: In which I go bush to write my book! Sarah never fails me. Smart girl, that one. & three months of solitary! DREAMY!

A big part of the problem is that most of our day is spent doing what Scott Belsky, author of Making Ideas Happen, calls “insecurity work” – keeping our inbox clear, checking Twitter, rewriting to-do lists. We succumb to insecurity work because it’s instantly gratifying, and it quashes the general nervousness I think we all feel at our core much of the time.

Tuesday eats: the problem with breakfast.

Chloe is the BEST for real.

I love Danielle LaPorte’s how to be a profiting truth o’mmercial, rather than a slickster. Those formulaic buy-this-product-NOW! pages give me the creeps, & I’m glad I’m not the only one! You should definitely read this if you’re selling anything online.

Vote for your fellow radical self love warrior, Fajr, in the Levi’s contest!

Nadie Se Conoce documents some of the less glamorous facets of the East Village.

The Science of Heartlessness. “Why are some people more — or less — sympathetic to others’ pain? Recent studies may have some answers.”

What we still don’t know about Lasik. “As the surgery continues to plague patients like me, the man who approved it for the FDA pushes for a recall.”

Was I a free spirit for nothing? “Everybody’s doing well but I’m still struggling. Was all my exploration a mistake?” Go Cary Tennis!

None of the people you are comparing yourself to have done what you have done. They have not tried to reinvent the world. They have played by the rules and reaped the conventional rewards.

Don’t be a sissy! A marital guide flashback. So funny.

Men are expected to be good providers — a good husband “gives wife ample allowance or turns pay check over to her,” he “waits up for wife or calls for her at her party” and, like a true patriarch, “reads newspaper, books or magazines aloud to wife.” He also must be sufficiently masculine (“well liked by men, courageous — not a sissy”). Women are expected to nurture relationships for their husbands (“writes to husband’s parents regularly”), stroke his masculine ego (“often comments on husband’s strength and masculinity”) and, overall, always looks like a pretty little housewife (“keeps self dainty, perfumed and feminine,” “dresses for breakfast,” never “wears pajamas instead of nightgown”).

By the way, zinc is back as an effective remedy for the common cold. I am writing to you as a bedraggled mess, having definitely caught the plague after two weeks of non-stop mania. But! I am taking Zicam every three hours, & it really is working!

Send me no roses–what’s so romantic about the most impersonal gift there is?

Here’s my unfiltered view of it: It requires no thought, no time, and no effort to send someone red roses. They are as ubiquitous as they are obvious. All that’s required is some method of payment. So how does a gift so entirely impersonal add up to romance?

From smart girl Jessica Mullen: why you don’t have to feel self-conscious about being positive. Also, check out her Gathering Momentum worksheets!

The joy of spanking.

The reason I’m standing on the third floor of the Lesbian Gay Bisexual Transgender Center in the West Village defending my kink-free life is that Jessica, a playwright I know, has brought me here after swearing that this was a community worth writing about.

What are lady magazines like in bed? I have definitely read something like this before, but it is still pretty funny.

What names have the most–& least–sex? Now there are graphs! (11 partners is a lot? What was the age of the people they were asking?!)

Most people you find attractive are not necessarily people you can spend a lot of time around. Getting drunk has the effect of turning any occasion into a party, though, and looking back, it can also do that with people. I always knew that alcohol made me feel so much more interesting. What I hadn’t fully realized is how it made other people so much more interesting. When I think about successful dates from the past now, I wonder whether we were just fooling each other.

Virgoans of fashion tell how you can be one too, aka, Karl Lagerfeld has his own column in Harper’s Bazaar! Here are some other columns!

Dear Single Women of NYC: It’s Not Them, It’s You

A patient’s belief that a drug will not work can become a self fulfilling prophecy, according to researchers… George Lewith, professor of health research at the University of Southampton, said: “It’s another piece of evidence that we get what we expect in life.”

The Incredibly Sad Thing I Saw on the Train. Gosh.

“Give Me Five Minutes, I Need to Go to the Toilet.” Zingggggg.

Have an amazing weekend, lovebug!