Carousel: Vin Diesel Can Sing, Getting Over Your Ex, And A Confetti Bracelet DIY! 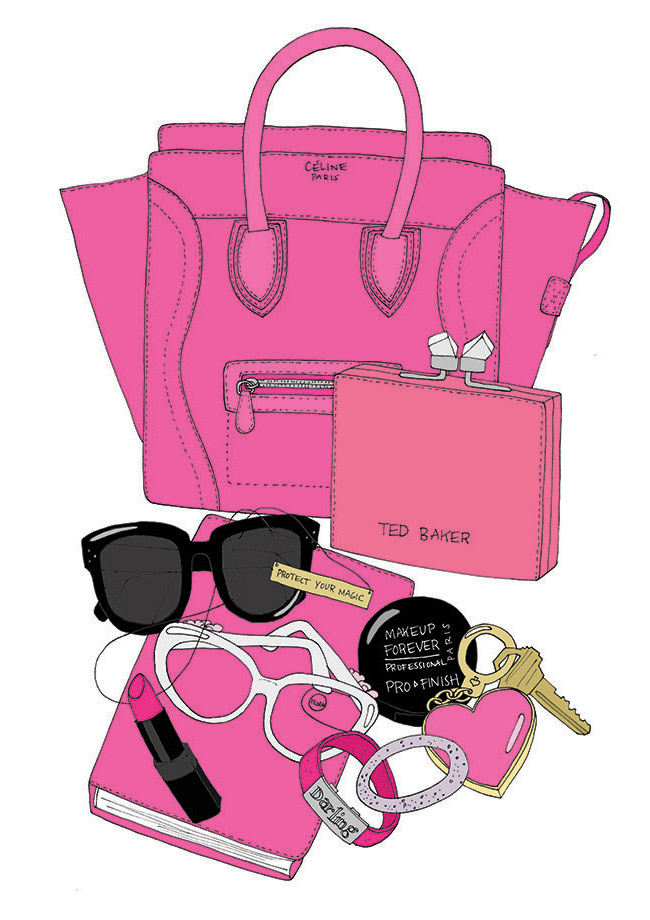 If you’ve ever wondered what’s in my bag, the adorable (and talented) EmmaKisstina did a little sketch! I love that she even included my keys, my Filofax, and my Be My Darling cuff! So much cuteness.

Here are my favourite links of the month. I recommend going through them while you lie in bed!

Here are 3 ways selfies can change the world, from Veronica Varlow.

Sometimes Kanye West is a bit obnoxious. But sometimes he is brilliant.

One of the best things about living in the East Village is EV Grieve, a local blog. Amazing things happen over there. For example, when a man died, the word was put out to see if any of his old friends could be tracked down. The results were amazing.

I’m about to dive back into the glorious world of Filofax, and I can’t wait. I discovered this method of “rapid logging” called Bullet Journal. It’s very interesting — a Virgo dream!

The French Girls app (as in, “Draw me like one of your French girls”, a la Titanic) is amazing: people submit selfies, and other users draw them. The results are hilarious and brilliant.

Seth Godin writes about how this is ours.

When they spit in the pool or troll anonymously, when they spam or break things, it’s as if they’re doing it to someone else, or to the man. … Over and over, we see that tribes and communities and organizations are able to teach people that this is ours, that it’s worth taking care of and most of all, that people like us care for things like this.

I never knew Vin Diesel could sing. More to the point, I never knew he made videos of himself singing — alone, mind you — on Christmas day. Wow. Just wow.

I loved how Veronica Varlow shared one tip to help you rock out your life and never give up. Plus how to get over your ex.

Are you busy “working on your novel”? A new book has been created on the subject. And I love this…

Also, I feel like the word “procrastination” is too strong. Just because you’re on Twitter saying stuff, it doesn’t really mean you’re procrastinating. The status update has become such a fluid part of culture.

Haters gonna hate: what’s a woman to do?

“I have a mantra: If you say things of consequence, there may be consequences. But the alternative is to be inconsequential,” the Op-Ed Project’s founder and CEO Katie Orenstein told me. “My point is not that we should speak up at any cost, but rather that we can’t allow fear of negative feedback to determine what kind of voice we have in the world.”

A 13 year old boy got an iPhone and some rules to go with it. Actually, I like these phone rules for everyone, teenaged or not!

I’m a sucker for a packing your suitcase hack. Here are 20!

Ditto beauty hacks. These are amazing! WHO KNEW?! Winged eyeliner with the help of a spoon?! Get outta here!

Here’s a damn good letter from the editor of The Guardian on the online abuse that follows any article on women’s issues.

Bedazzle your boring picture frames with this cute as hell tutorial. Glitter FTW!

I really need to make confetti bracelets, and you do too.

I’m heartbroken about Robin Williams’ passing. Here’s a great interview he did with Marc Maron.

I’m obsessed with Elemoon, a bracelet which changes colour to match your outfit, alerts important calls and texts, and even helps you find your phone! (Back it!)

What are the contestants from America’s Next Top Model up to these days? Good question, Vulture, good question.

I’ve wanted to attend Diner En Blanc for years. Here’s a little insight into the event.

Emma, who came to our Auckland Blogcademy, wrote a fantastic post about bulimia, which is worth a read.

The Great Discontent did an interview with Molly Crabapple, and it is so, so good.

If you’re the sort of person who fucking whines about being motivated, like some of the art students I lecture, then just fucking stop. I’m not interested in speaking to anyone who wonders how to motivate themselves. If you need to talk about how to get motivated, then go get a normal job in the normal scheme of the world and just do art as a hobby so you still love it. Stop clogging up the field for the people who need this like a drug. … We also live in an era where a lot of the old, supporting institutions are either opening up or crumbling, so I suggest that people don’t try to distort who they are to fit notions of what’s professionally viable, because that paradigm is over. I suggest you focus in on your weirdness, your passions, and your fucked-up damage, and be yourself as truly as you can. Express that with as much craft, discipline, and rigor as you can; work as hard as you can to build a career out of that, and then you’ll create a career that you love and that’s true to yourself, as opposed to doing what you think other people want and burning yourself out when you’re older.

Messy Nessy explored vintage Vegas (and some nearby ghost towns)…

Claudette is a hermaphrodite sex worker in Switzerland.

I was featured on The Numinous for their My Mystical Life section.

The Libra Dress Historian is a genius. Her column on Mystic Medusa, on wearing black, is smart and incisive.

Once upon a Dior-time (I’m thinking the 40s and 50s here), black was also edgy. Fast girls and beatniks wore black from their polo necks to their brassieres in rebellion against the sickly pastels that teens were supposed to wear. But now black is an invisibility cloak of conventionality. Girls from Aries to Pisces love themselves in black; say their boyfriends love them in black. Black has become what baby pink and blue were in the 50s, the colour of pleasing. Whereas in the 50s and 60s feisty chicks donned black underwear to denote their passage into wilderness, nowadays, the most conformist girls wear opaque black coordinates, while their more adventurous sisters experiment with colour, texture and pattern.

Hahaha, this made me laugh: subway yoga is a new thing. But seriously, I wouldn’t want to get that close to the floor of a subway car…

Want to go clubbing, sober? A new club in Stockholm has you covered. (Or, you could just not drink anywhere else in the world. But it’s an interesting idea!)

If you’ve ever dated an Aries — hell, I married one! — this will make you laugh.

The ultimate guide to miserable utter failure, by James Altucher.

I was fascinated by this post on the outlaw Instagrammers of NYC. (They scale buildings and bridges to document the vista.) Of course, that then led me to this video, which made my palms sweat.

I went on a Style Like U binge. Check out Betsey Johnson, B. Åkerlund (incredible stylist), and Gail Chovan, who owns Blackmail, one of my favourite stores in Austin.

At one point, I had over 200 paris of shoes. It wasn’t what I needed to be doing in life. If it’s not beautiful or useful, then why do you have it? The things you have should be precious and make you have an emotional response.

Behind Claude’s Doors. In 1960s Paris she became known as the world’s most exclusive madam, whose client list was said to include John Kennedy, de Gaulle, Onassis, and multiple Rothschilds, and whose beautiful and cultivated girls often went on to marry wealth, power, and prestige. But among the many secrets Madame Claude kept, perhaps the greatest were her own… (The intrigue!)

Can you do one page a day? I love, love, love this!

Here are 50 essays guaranteed to make you a better person.

People in NYC are interesting.

Want to write a book? Here are some great resources to help you along the way.

We must risk delight after a summer full of monsters.

This video of people climbing to the top of buildings in search of a thrill is wild.

Getting into Cirque du Soleil is just as hard as you would imagine.

P.S. There are only three seats left for our Radical Self Love Salon in September! xo