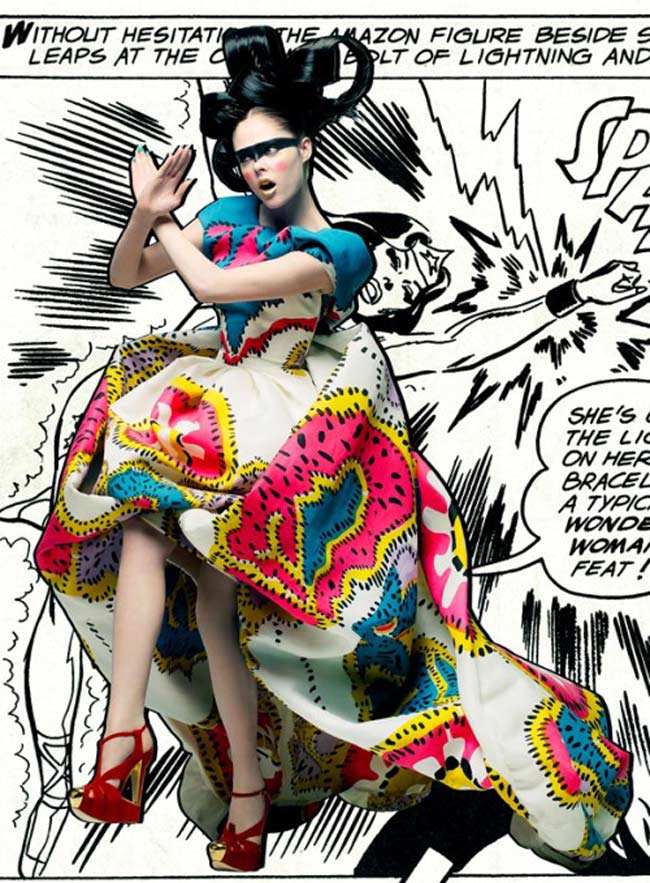 Let’s round it up, shall we?

Here’s my best of the net for this week!

How I eat & Walking meditation, have you tried it? by Sarah Wilson. Sometimes it feels redundant to link her every week, because surely you’re reading her religiously already, & sometimes it boggles even ME, because how can one woman put out such top-notch content consistently? What a trooper. I salute you, Sarah Wilson. Anyway… the linked articles, are, as always, brilliant. Read up!

American uber-nutritionist Dr David Katz argues that when we eat one flavour (salty, sweet or savory) at a time, it stimulates a specific site in the brain telling us when we’ve had enough of that flavour. But when mish-mashed together, as they are in a sugar-packed jar of “savory” pasta sauce, these flavour points aren’t satiated and the “full” signal never gets through. Ergo, we eat more.

Vega Wang’s Bioluminescent Couture! I think this is the future — not jet-packs. Even though jet-packs would be pretty great…

Morning, Friends. Who Can I Help Today? Jonathan Fields tweets this every morning. Why? He explains. & I love the comment which says that him doing this is like “karmic breakfast”!

Um… Bridalplasty freaks me out, & I’m not the only one.

“They should be giving out therapy instead of nose jobs. … When you start planning a wedding to include lip [injections] and rhinoplasty in addition to flower arrangements, it’s almost as belittling to your groom as it is to yourself.”

I really enjoyed reading Living Your Own Story by Hiro Boga.

These illustrations are sublime! Sun in Scorpio for British Vogue. (English magazines are always the best, don’t you think?)

I know I linked to it in Things I Love Thursday yesterday, but Black Swan looks AMAZING. I think it is kind of a girl movie. All my female friends are dying to see it, it’s going to be a fantastic outing.

I watched this documentary, We Live In Public, the other day. It’s free to watch on Hulu & I recommend you do. I actually watched it again yesterday. It’s that good. (Not coincidentally, the film won Sundance’s Grand Jury Prize in 2009.) We Live In Public is about this fascinating guy called Josh Harris. It documents the very very first experiments in web TV, a collaborative art project called Quiet: We Live In Public where 150 artists lived in a bunker & were filmed every moment, & his last major internet project, We Live In Public, which consisted of dozens of heat-sensitive cameras rigged up in his apartment, which charted every move of him & his girlfriend. It was SO interesting & thought-provoking, made even better by the fact that I had no idea what I was in for when I pressed play.

“With Quiet, Harris proved how, in the not-so-distant future of life online, we will willingly trade our privacy for the connection and recognition we all deeply desire. Through his experiments, including another six-month stint living under 24-hour live surveillance online which led him to mental collapse, he demonstrated the price we will all pay for living in public.”

As always happens with me, when I find something that piques my interest, I have to research it until I know everything about it. So, this article in the Times is great. Wired City: Josh Harris’ Plan To Make Us All Live In Public is super-interesting. Would you take part? Suddenly Pseudo gives more information, & Josh Harris — Nostradamus of the Net Tells Your Online Future is a great interview. See also, Sundance Toasts an Early Online Life & Josh Harris: The Warhol of the Web. Here he is on Carson Daly & on Sky News, here are part one & part two of a Sundance Q&A, here’s a Q&A at MOMA, & part one, part two & part three of a profile from First Person. (Told you I got a tad obsessive!)

“Andy Warhol said that, in the future, everyone will be famous for 15 minutes,” Harris told me. “But I think he misunderstood what was happening. I think what people are demanding is 15 minutes of fame every day. And mark my words, they will get it. That’s where we’re heading, whether we like it or not.”

How to avoid being a judgmental vegan.

This breaks my heart & gives me hope all at the same time. Sofia’s eating disorder treatment fund.

Pastor says student’s suicide was tipping point for his coming out — I love when he says, “There comes a point in your life where you say – how much time do we have left in our lives? Are we going to be authentic or not?”

This soon-to-be-constructed building in Miami is wind-powered… & gorgeous!

Passengers Push for Child-Free Flights. Um, yes please. Though it looks unlikely to ever actually happen… In the meantime, can I suggest noise-cancelling headphones?! They really are a godsend.

I want to go to Tail of the Yak! Angel makes it sound so appealing!

What I Know For Sure: Gossip.

We live in a culture obsessed with gossip—who’s wearing what, who’s dating whom, who’s entangled in the latest sex scandal. What would happen if we declared our homes, our relationships or our lives gossip-free zones? We’d probably be surprised at how much time we’d free up to do the work that’s most significant—building our dreams rather than tearing down others’. We’d fill our homes with a spirit of truth that would make visitors want to kick off their shoes and stay awhile. And we’d remember that while words have the power to destroy, they also have the power to heal.

Kelly Osbourne cracks me up. “I Don’t Care What Anyone Else Says, Working Out #$&@* Sucks!”

Latha sent me this link: My son is gay. LOVE IT!!! Cannot tell you how much I LOVE IT!!!

The Conduct of Life is a collection of writings by Ralph Waldo Emerson (love!). Haaaaave a read! Thanks Eden for le link!

Leo Babauta on lessons from a car-free life! 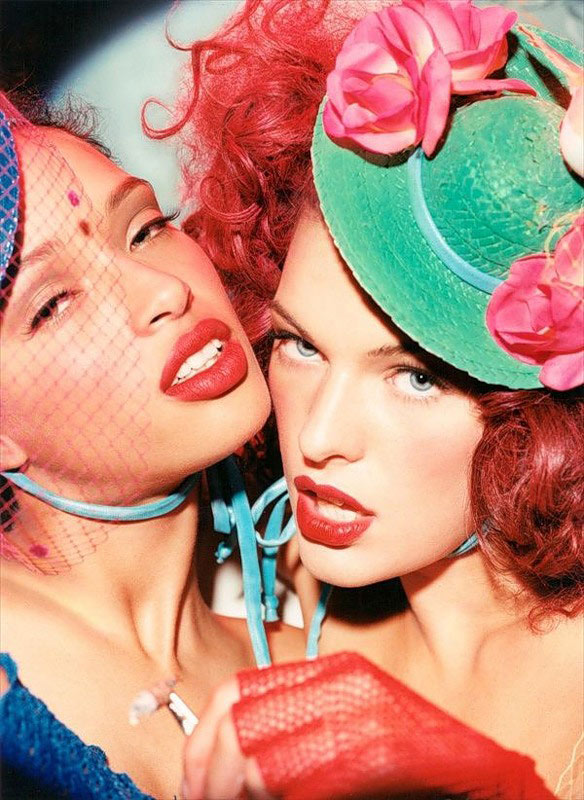 Is the TSA still allowed to touch my junk? Also, read this. BRAVO. This nonsense has got to end.

Hahah! Hilarious pets photobombing each other. I love this. It makes me think of the way Dolly ALWAYS needs attention if she sees me cuddling with Hank!

So strange… but somehow, strangely compelling! Downtown From Behind.

Frockwriter published a piece about my collaboration with Google’s Boutiques.com. It is probably the most accurate & objective thing that’s ever been written about me… which I appreciate. Thanks, Frockwriter.

I did a shoot & an interview with StyleCaster! Have a look!

The illustrated man of rock & roll: Nick Cave, the fruit of a bad seed from The Selvedge Yard.

Zlata is pretty amazing! Though I think her vulva (!!!) is showing in that first picture?! Hmmm…

The Wildfox spring lookbook is SO RAD!

Want to know what a high fashion tarot deck looks like? Now you know.

If you always put limits on what you can do, then you might as well be dead.

Nice visuals: Romina Lanaro by Camilla Akrans (beware, her butt is showing! Not good for workplaces), Sasha Pivovarova by Michael Thompson, Sara Blomqvist by Andreas Ohlund (beware, boobies! Again, not safe for the workplace), Marcelina Sowa in Going Bathory (that first picture is… AMAZING), Bárbara Zanco by Márcio Rodrigues (I want to wear that many flowers on my head TOO!), & Jevne Ragnhild by David Bellemere (I love that shot of her covered in little pink dots!).

Siobhan emailed to say, “I am writing with regards to getting your delicious nonpareils involved in a project/blog carnival that I am going to run November 26th 2010. I am in the process of organising a prjoect :’24 Hours in Your City’ where worldwide bloggers (from Rome, to Guatemala,to Dorset, to Sydney), post about a fantastic 24 hours in your city, but not seasonally specific. So that the reader can journey with you around your town on a great day-kind of like a more accessible Lonely Planet (I’m off the opinion locals always know the best places).” Doesn’t that sound so good?! Check out Facets of the Fabulous to get involved in the project!

This guy did a fashion editorial shoot with his iPhone. Not too shabby!

Paris versus New York is SO sweet & funny!

How to live perfectly content in the here & now from the Art of Minimalism.

From Rabbit Write: The Bisexual Struggle: Do I Need To Come Out? Such a great question & a very thoughtful answer. Rabbit is 100% correct when she says that sexuality is not just about what goes on the bedroom.

200 Portraits! You should participate, just send her a photo! Here are some of the portraits she’s already done!

Rebecca Minkoff are having a sample sale, & it is pretty incredible. MAJOR bargains to be had & their bags come in the most beautiful, bright colours! Also, if you refer a friend, you get another 10% off! Check it out this weekend!

Taylor sent me this & I love it!

Have an incredible weekend! Do something which scares you!