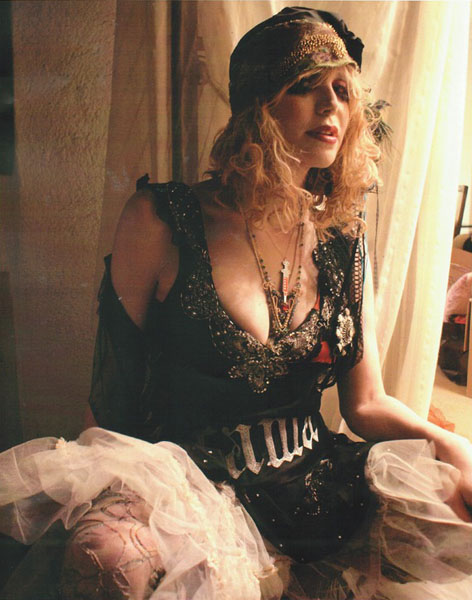 Here are some things to keep you occupied & smiling. Hey, guess what! It’s Hallowe’en tomorrow! What are you going to be? I don’t even know yet! Enter full-on panic! HELP ME!

DEALBREAKER. is my new favourite blog. Why, you ask?

DEALMAKER/BREAKER: You Are Lady Gaga

You told me to meet you here, in the back room of what appears to be either a giant shoe store or a gay bar. You called me “Lovely” as if that was my name (it’s not). You ordered me a drink, and it was a smoothie made of hundred dollar bills and glitter. I’m more of a Jameson man, myself, but I guess I appreciate the thought? You told me my clothes were “not camera ready,” and you gave me a shirt made of ostrich feathers. But, you’re really hot? I think? I actually don’t know what you really look like, to tell you the truth. But, I guess any girl who wears that much makeup at all times must be a knockout, right? Or not? Look, I’m too confused to fight this. Yes, I’ll go on your hot pink private jet. Yes, I’ll drink champagne w/you and Perez Hilton. Yes, I’ll roll around in a giant hamster wheel while you throw red paint on me. This must be what it feels like to fall in love. That, or I’ve lost my f*cking mind.

Okay, so we’ve been dating for a while now and you have yet to put pants on. I’m sorry, but I can’t introduce you to my family while you’re wearing a see through mesh bodysuit. I just don’t think my grandmother would appreciate an up close view of your vagina. Just a hunch I had. Ugh. This is really hard for me to say, but- I’m sorry, can you cover your nipples for ONE second? This is kind of important. I don’t think this is working out, and- no, I don’t know where you can get some more coke, but that’s sort of the prob- it’s really hard for me to have this conversation with you when you’re writhing around on the floor like a sexy jellyfish. Use your bones like people do…

They will have a book deal in less than a year. Place your bets now.

This make-up tutorial on Specktra is totally amazing! The entire tutorial section of the forum is pretty incredible, actually. Hello, new obsession! Pleased to meet you!

Read this article on Lily Allen quitting the internet & PAY ATTENTION. & then remember to always be brave & not be an asshole, in that order.

Because, if you’re a woman, and you operate without fear – fear of people calling you fat or ugly, fear of being deemed unladylike (or “out of control,” or “bratty,” or whatever), fear of making people angry – people will do their very best to drill it into you. People will scold you, scorn you, call you names, tell you that you ought to feel ashamed of yourself. They’ll try to scare you, and keep you scared. And the end goal of fear is silence. It is always silence. Silence doesn’t have to mean not talking, either: only saying what you think people want to hear is also silence, maybe the worst kind of silence, because then people can point at you and go, look! She’s fine! And she’s on our side now! Gee, we really helped her out. No, you didn’t help her. And maybe you didn’t even bring her over to your side. Maybe you just made her too scared to tell you the truth. That’s the end goal of it, all of it: we want each other to get to that point (have you been to this point?) where you are just about to respond, you have something to say that you believe to be true, and then it just dries up in your mouth. And you think, why bother? You think, it doesn’t matter whether I’m right. You think, being right won’t help me in the long run. You think, silence is easier. It’s a permanent fear we’re working toward – every time that person dares to disagree with you, you want your voice ringing in her head, stilling her tongue, making her doubt herself too much to try anything. Or, if she speaks, you want your voice to come out of her mouth. Your voice, or a very good imitation.

Scientists study possible health benefits of LSD and ecstacy from The Guardian. Cool. Also from reading this article I found out about the Beckley Foundation, “a charitable trust that investigates consciousness, its altered states & the effects of psychedelics & meditation”. They sound like a fun group of people, don’t you think?!

P.S. Maurice Sendak, author of Where The Wild Things Are, is totally awesome.

Parents who think the new film of Maurice Sendak’s picture book Where the Wild Things Are is too frightening for children can “go to hell”, the author has said. With a film version adapted by Dave Eggers and Spike Jonze out later this year, Sendak told this week’s edition of Newsweek that he would “not tolerate” parental concerns about the book being too scary. “I would tell them to go to hell,” Sendak said. And if children can’t handle the story, they should “go home,” he added. “Or wet your pants. Do whatever you like. But it’s not a question that can be answered.”

AMEN! The comments are great too. I like this one very much.

The misguided parents who ‘protect’ their children from scary stories are raising a generation of dull men and women who will be afraid of their own shadows. There’ll be fewer risk-takers, entrepreneurs, explorers, adventurers, rule-breakers and world-changers as a result.

I love that. I am so sick of everything being so sanitary & politically correct. Let’s fire it UP, people!

A little boy (maybe 5 years old) wrote to Maurice Sendak [author of ‘Where The Wild Things Are’] telling him how much he loved his books, his drawings, everything about him. As you might imagine, Sendak gets a lot of fan mail, but he was so moved by this one that he wrote the boy back and enclosed an original drawing, just for him.

The boy was so overjoyed when he received the drawing that he ate it, the entire thing, every last shred of pulp and ink.

His mom wrote back to the author, telling him the story. Sendak was thrilled, saying that that was the greatest compliment he had ever received.

The editors of this magazine asked me to read all 800 pages of the Sex Diaries, and, using them as a source text, develop some kind of taxonomy of contemporary sexual anxieties. (Let others parse Chaucer, my role was that of exegete of “The Polyamorous Paralegal.”) So that’s what I’ve done. Herewith: ten things that seem to be making our playful, amorous youth crazy.

Halloween costume ideas from What I Wore. Clever girl!

13 Signs She’s A Loser from The Frisky. This is written for guys, but do any of these ring true? Ouch. 21 Halloween Costumes That Will Not Get You Laid is reeeeeally funny, too.

Famous buildings! Vixxie sent me this. How delicious. I wish all cityscapes looked like this!

Mayer Hawthorne is rad. My friend Sam wrote about him for the NME music blog. Good readin’!

Matthew Gray Gubler is pretty cool too, just in an entirely different way. Thanks Mademoiselle Robot!

Katy Perry Throws Best. Birthday Party. Ever. from Guest of a Guest.

I’ve always been sort of ambivalent towards Katy Perry, but that was before she threw the most amazing 25th Birthday party in the history of birthday parties. The singer instructed all her guests to wear white to her Willy Wonka themed party (most complied; Perez Hilton unexplicably and annoyingly dressed up like Mother Theresa). Then, they had a huge paint throwing party, completely covering themselves in neon-paint. And there were oompa loompas, and a big vat of pink frosting.

Is your clingy boyfriend insecure or abusive? from Teen Vogue.

Le Love is the best ever place for sweet real love stories. You should read it, it’s good for you.

My sweet girl Angeliska has started a Tumblr! It is delicious. Gobble!

Zoe Foster (epic girl crush) interviews Miranda Kerr about her new skincare line. Um, I want all of it. It sounds GOOD.

Saturn’s in Libra, dun dun dun dunnnnn! Actually it is good news. But here is what the AstroTwins have to say about it. Read up!

Have an amazing weekend, dollface!