Coming Out To Homophobes 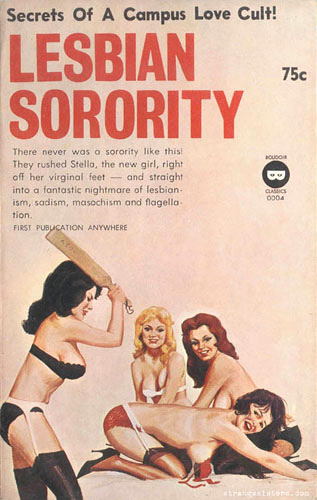 “I’m bisexual, have had past secret relationships with females and I haven’t told anyone except my boyfriend, who I know is one of the most open minded people out there. Do you know how I could tell my parents, friends and other people I know? My parents make fun of gay/bi/lesbian people. My friends stopped hanging out with one of our close friends because she told them she is a lesbian and another one because she is bi. How could you just stop hanging out with one of your friends after they told you probably one of their most in depth secrets? Also, my school isn’t exactly the most friendly towards the openly gay people or even those who “look” gay. So can you help me figure a way to come ermm – halfway out of the closet – with these people without making them spaz out and shun me?”

Oh, honeypuff. I don’t envy you your situation at all.

First of all, it sounds like you know that your friends are kind of messed up. I honestly can’t fathom writing someone off just because of their sexual preference — it boggles my mind. You sound like you too are shocked & appalled & a little disturbed by their behaviour. & yet you still want to come out to them.

I understand this. It’s human nature to want to share our secrets, to unload burdens, to communicate the rare parts of ourselves. Why else do you think gossip is such a huge part of most people’s lives? So, I get it — I understand your conflict.

But really, the big question is this: Do they actually need to know about your secret sapphism? Once you know the answer to that, you will pretty much know how to proceed. It all hinges on that decision.

I know that it’s pretty weird & heavy to have this past that no one is aware of, & I think it’s important for us to be honest about who we are. But given their past responses to these kinds of things, don’t you think that telling them is kind of a big risk?

This might sound mean, but if they’ve dropped your other friends for being bi or lesbian, what makes you think that your situation will be any different?

Having said that, I have no idea about the context of your situation. Maybe you subconsciously know that it’s time to move on from your friends, & you think that coming out is the best way to get rid of them quickly. If that’s the case, then you might as well do it. Just make it snappy!

On the other hand, if you do actually still want to be friends with them, you already know what’s going to happen when you say “I like girls!”. Odds are extremely high that they are going to flip out & stop speaking to you. You might be able to salvage some of the friendships but on the other hand, maybe not. The best predictor of the future is the past, & all that. I think that if you do really intend on coming out to them, you should also start scouting for new buddies. Pronto.

I could give you some tips for coming out, but we can’t control other people — only the way we behave. It doesn’t matter how you phrase it, your friends are going to react in a way that is consistent with their beliefs (& their experience). They sound like the sort that will go from shocked to confused to scorn-tastic in the blink of an eye. Which, quite frankly, sucks.

I think you really have two choices.
1. Remain a girl lover on the down-low, keep your friends in the dark & enjoy their friendship. Until you fall in love with a woman who doesn’t want to date a secret lesbian.
2. Tell them the truth & find some new friends.

I know that I would personally feel very uncomfortable knowing that my so-called ‘friends’ would drop me if they found out that I wasn’t straight as an arrow & planning on moving to the suburbs to live in heterosexual bliss with my very masculine husband & 2.3 children. I mean — what? How can a friendship continue when you know that heterosexuality is the only thing that hinges you together? That’s so weird! Time to move on, I think.

As for your parents — well, your parents are a whole different kettle of fish. I would hope that because you’re their child, they might react differently. But, sadly, it’s not guaranteed. Again — while honesty is cool, do they need to know? If your current relationship ends & you fall head over heels for your minxy tennis instructor, maybe that would be a better time to bring it up.

I would love to say, “Tell them & who cares about the haters!”, but I think to do so would be irresponsible. In an ideal world, we would all be upfront about our sexuality & who we are, but from what I’ve seen, I don’t think the world is quite evolved to that point yet. I always endorse being true to yourself & never being ashamed of who you are — but if you live in a small country town where they seem to regard abusing gay or “weird” kids as some kind of amateur sport, you really need to weigh it up in your own mind. I guess I would say that being real & true is important, but being safe should always be your first priority.

I hope this helps. Good luck! & nonpareils — what do you think?