I love cupcakes. I find their aesthetic inspiring, but I also usually enjoy looking at them more than eating them. Most cupcakes are, in my experience, fairly disappointing on the tongue — except for the cupcakes at Crabapple Bakery in Prahran, Melbourne! Anyway, I am a fan. Proof: I named my mailing list in honor of them, & I have three tattooed on my arm.

So, they’re quite trendy at the moment, which is great news for those of us who have a fondness for them. Like with any trend that touches on something you love, I suggest you take advantage of it & snap up as much as you can.

Here are some things I’ve found recently with a cupcake motif:

Buttons featuring cupcakes with ghosts from Nut & Bee! These are made by a girl I know called Annette who lives in New Zealand. We used to send each other FAXES, how old school is that? We met on a.g.f. — yes, the alt.gothic.fashion newsgroup! — in about 1996. Wow. 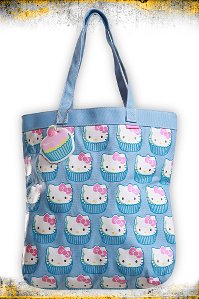 Hello Kitty cupcake tote from Hot Topic. I like this very much, but as much as I love Hello Kitty, if someone gave me a cupcake with her head on it, I think I would be creeped out. It kind of reminds me of this very scary photograph. (Cool idea though, right?) 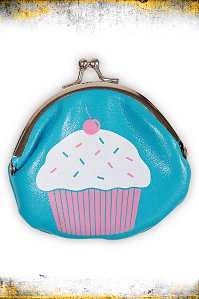 Cupcake coin purse from Hot Topic. So cute & omg, it’s in my colours! The idea of a coin purse annoys me, since I hate carrying change & rarely do, but I am entertaining the idea of a shopping purse — it would contain all my stupid membership cards from boutiques, cafes & juice bars. I hate foraging around in my wallet for them. Hmmm. 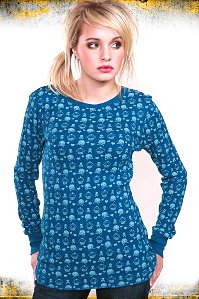 Blue cupcake-covered thermal also from Hot Topic! Oh sullen Hot Topic model, we feel your pain. Cute thermal though! I would totally wear the hell out of this in winter. 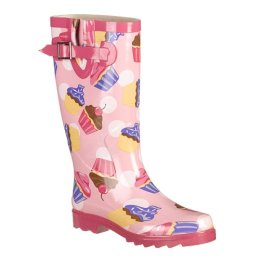 Pink cupcake rainboots from Target. I’ve never been into an American Target so I have no idea what it’s like, but oh my god, cupcake rainboots?! They also come in lavender, for those of you who don’t dig on pink (for shame!). 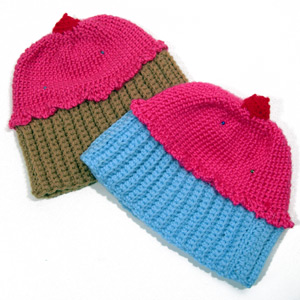 A cupcake hat from Pixelgirl! Oh my god. I wonder how it would look on a head. Possibly horrific. Does anyone want to take a gamble?

« What Does Your Clothing Say About You?
Diamonds Are A Chump’s Best Friend? »