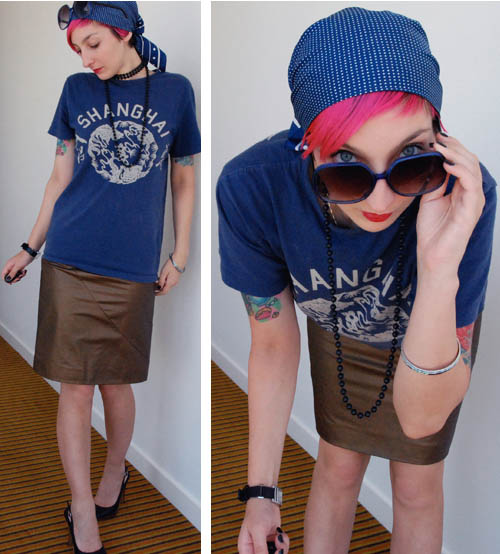 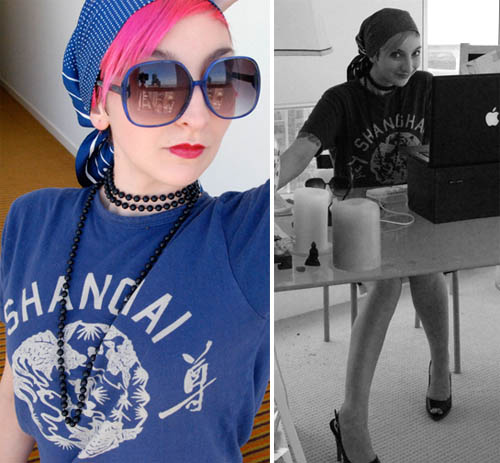 (Like the sneak preview of me at my desk?)

I’m going for a Parisian theme recently. I think it’s because of the black manicure — I feel that the only people who really carry this off effectively are either the French, goths or emo kids (& I would prefer to feel French). The black takes some getting used to. I haven’t had my nails this colour since I was actually, ahem, goth. (Don’t tell anyone.) At first I did, indeed, feel like Goth Hands McGotherson, but now I like it. I think the way to do is to set it with a lot of gloss & keep it immaculate. Also I think that if my nails were pointed, rather than the square shape that they are, they would definitely be veering into goth territory.

I did a wardrobe clean-out a couple of days ago, & am re-evaluating a whole lot of things I barely wear. Like, for example, this skirt. Previously I never wore it because the top & bottom 5cm of the skirt are unlined, meaning in summer it stuck to me — but I think that with a bit of jiggery-pokery in the petticoat department, I can fix that problem. Seems to be working thus far.

I feel very glamorous. I think it’s the lipstick (M.A.C. Red). Wearing red lipstick more often was one of my style resolutions for the year. I think I’m doing very well.