This article was suggested to me by the inimitable Mary Bee, who I met in San Francisco (after many missed encounters at Burning Man) & then proceeded to sit with her in the sun & drink pomegranate cocktails.

I have never been a big drinker, which always perplexes people. I drink for the taste & that is about it — if I get dizzy & take my shoes off & start crawling on people, well, that is just a pleasant (?) side effect. The point is, I don’t really like beer (except for Belle Vue Kriek, which is cherry-flavoured), I don’t really like wine (unless it is extremely sweet, with a noble rot & in a small bottle), & I have never enjoyed things like rum & coke.

I am difficult, yes. But I do enjoy a good tipple. I like to make drinking an occasion. I remember once, a photographer friend of mine (we will call him Mr. Custard) arranged to meet me on a bridge by the sea. It was winter, we were both wearing heavy coats, hats & scarves, & from within his coat-pocket he produced a hipflask. We stood there, sipping & smoking as we caught up with one another’s lives.

Canadian Club & ginger-ale
This is one of two things I will drink if I am somewhere that doesn’t do cocktails. It was trendy for a while, I don’t know why, but that has passed, & now it is assured you will be desperately uncool if you order it. Which suits me just fine, since it tastes delicious.

Jameson & lemonade
I was introduced to this incredible combination by my friend, Mr. Daunt. We spent an evening drinking it & singing along to Elliott Smith in a dark room. It was great. If you have a sweet tooth, this is a fantastic drink for you, as even the smallest quantity of lemonade manages to almost entirely kill the taste of the whiskey.

Cosmopolitan
The Cosmopolitan was popularised (at least in part) by Sex & The City & while it has probably had its hey day, it’s still a very good-looking & tasting drink. A Cosmopolitan typically consists of vodka, Triple Sec, cranberry juice & freshly-squeezed lime. It is also a beautiful pink colour.

Amaretto Sour
I really enjoy a good Amaretto Sour. The flavour is almost indescribable. It is made with Amaretto liqueur & the juice from half a lemon, shaken over ice & served with a maraschino cherry. In New Zealand & Australia there’s usually an egg white in the mix, which makes a foam on the top. (I prefer it without the egg white, since I can smell it while I drink it & that is not something I appreciate.)

Caipiroska
This is a very simple drink but if you get a crappy bartender, they probably won’t know what you’re talking about. The first time I tried one of these was in London, with (again) Mr. Daunt. A caipiroska is vodka, lime & sugar muddled together. They are absolutely delicious, I could drink them forever.

The Bastille Bomb
I have no idea what this tastes like, but it’s great looking. It’s a shot which is red on the bottom, blue in the middle & clear at the top. (Blue curacao, cointreau & grenadine.) 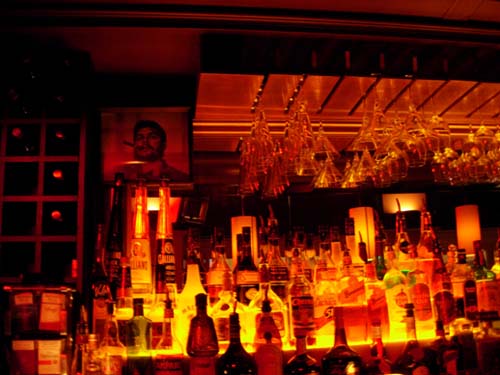 If you want good drinks, it’s best to go somewhere that specialises in cocktails & has exceptional bartenders. Usually if you do a bit of googling on bar awards in your area, you will get an idea of where to go. When I was living in Auckland, my absolute favourite bar was The Corner Bar, on the corner of Shortland & High Streets. It’s quite small inside, but the guys behind the bar are exceptionally cool & amazing bartenders. They were in the running for best bar in New Zealand last year, but I went travelling before the final announcements were made, so I don’t know what happened. To give you an example of how good they are, you can just tell them what you feel like drinking & they will make it for you. I once asked for something that tasted like Dali — seriously. “Desert sands, roses, elephants & melting clocks” was my description & the drink I got was absolutely incredible. They use fresh fruit & real chocolate for their drinks; they are amazing. If you’re ever in Auckland, you should go there.

When looking at drink recipes online, remember that 1oz = 29.5ml

If you want a book on drinks for making at home, Cool Cocktails by Ben Reed looks like a good guide.

“Choctail” recipes. They sound good but there’s a lot of milk in them & the article came from the Dairy Farmers of Washington, which kind of gives me the creeps. I am not a big milk fan. Anyone keen to try ’em with soy or rice milk as a substitute?

Absolut.com has a whole lot of recipes, as you would imagine.

Candy Cocktails from candyaddict.com — for when you want a sugar spike as well as a lack of coordination.