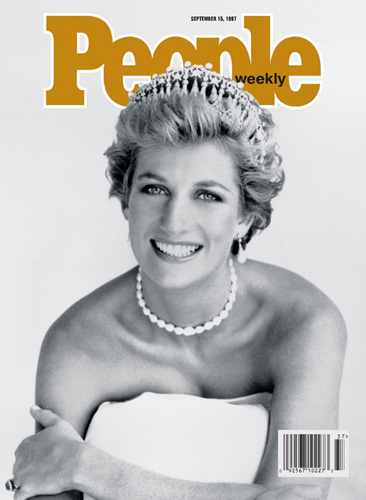 She was a beautiful woman, with incredible style, grace, compassion & presence. It’s interesting to think about how her life might be these days if she were still alive. How would she dress? Would she still be a public figure, or would she have retreated into solitude? One thing’s for sure — she wouldn’t be one of those celebrities photographed in a velour Juicy Couture tracksuit!

There is a lot of talk about her at the moment. Anniversaries are like that. It seems, to some, that now it’s okay to criticise her again, since she’s been dead for ten years. My mother & I discussed this the other day. My mother said that she thinks the reason for the backlash is that now, looking back, some people feel silly for having been so devastated by her death, & this is their way of feeling better about it. I suspect she might be right.

I still think she is fabulous, & for this reason, I present…

Lessons we learned from Diana, Princess of Wales:

Dress up
& don’t be afraid to take risks! Diana broke the mould of the chronically style-deficient royal family. She always looked wonderful & inspired an entire generation of women to wear hats & make an effort with their appearance.

Do what you feel is right
Diana taught us to do what feels right to you. She made history when she was photographed holding the hands of an AIDS sufferer — at a time when everyone thought HIV could be contracted just by touch.

Be generous
Use whatever influence you have to do good things. Selfishness will only take you so far.

Ignore critics
For all of Diana’s work, there were still people who criticised her & found fault in her efforts. You know what they say — no statue has ever been erected for a critic. Stay focussed, mind your own business, & don’t let other people’s insecurity or bitterness affect you!

Be brave
Because it elevates others & allows them to embrace life more fully. Diana’s charity contribution was enormous. She walked through active minefields in an effort to raise awareness of land-mines, & spent days in Angola visiting people whose lives had been destroyed by the use of land-mines. She was committed to removing the stigma of AIDS & helping the homeless. She spoke openly about her struggles with eating disorders & depression, giving hope to people the world over.

Be personable
Being unafraid to be seen as compassionate, open & approachable was one of her greatest assets. You get what you give, & being charming & pleasant will change your life. It makes other people feel better, & they will love you for it.

Thank you, Diana. (& thank you Liberty Post for the inspiration!)

In Death, Diana Got Through to Royals, Author Says from NPR

Thoughts on the passing of a princess