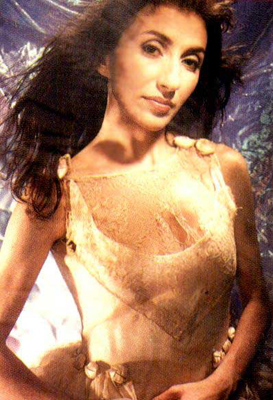 Her writing is like nothing I’ve ever read before. For those who are new to it, it can be a bit challenging, but once you are over the initial stumbling block, you’ll be glad you persisted. Her books are imbued with magic & sparkle & beauty — a more captivating, ethereal world than the one we normally see — but they still deal with real issues & problems. Her characters are multi-faceted & flawed & easy to identify with. They are the sort of book you should lend to your best friend.

FLB’s most popular book is Weetzie Bat, a story about a girl looking for love & friendship. Block describes Weetzie as kind of her alter-ego, but she also says that the physical aspects of the character were inspired by a hitch-hiker she saw once in Hollywood. She had spiky bleached blonde hair & was wearing a pink ’50s prom dress with cowboy boots. Later, Block saw a pink Ford Pinto being driven by someone who looked similar to the hitch-hiker — the number-plate said ‘WEETZIE’.

“I wrote Weetzie Bat as a sort of valentine to Los Angeles at a time when I was in school in Berkeley and homesick for where I grew up. It was a very personal story. A love letter. I never expected people to respond to it the way they have. I never imagined I could reach other people from such a very personal place in me.” — Francesca Lia Block

This is a run-down of her major books. 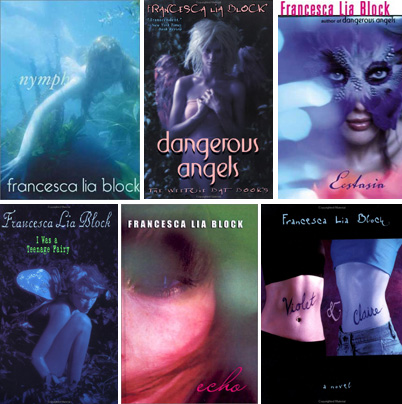 Dangerous Angels is my favourite series by FLB. It is actually one big book with four stories inside it: Weetzie Bat, Witch Baby, Cherokee Bat & The Goat Guys, Missing Angel Juan & Baby Be-Bop. You can buy them all seperately but I don’t see why you would, so Dangerous Angels is a great way to get your fix. The series follows a couple of families & a slew of characters in their adventures around Los Angeles — what they call Shangri-LA. These books were my saving grace in high school. It is hard to explain why, I guess they just gave me hope that there was more to life than private school & stupid girl politics. All the characters in Dangerous Angels are unconventional love warriors, totally inspiring & amazing. Oh, & Witch Baby is my favourite! I used to identify with her very strongly.

“All the girls were infatuated with Dirk; he wouldn’t pay any attention to them. But on the first day of the semester, Dirk saw Weetzie in his art class. She was a skinny girl with a bleach-blonde flat-top. Under the pink Harlequin sunglasses, strawberry lipstick, earrings dangling charms, and sugar-frosted eye shadow she was really almost beautiful. Sometimes she wore Levi’s with white-suede fringe sewn down the legs and a feathered Indian headdress, sometimes old fifties’ taffeta dresses covered with poetry written in glitter, or dresses made of kids’ sheets printed with pink piglets or Disney characters.”

Necklace Of Kisses was written years after Weetzie Bat, but is a follow-up to the original Dangerous Angels series. Weetzie is 40 now, & My Secret Agent Lover Man is just “Max”. Since the Twin Towers crumbled, there have been no kisses between them. Weetzie packs a bag & moves into a little pink hotel where she meets different people who teach her about passion & love, & help her to find herself again.

Psyche In A Dress is a short book of retold Greek myths. FLB takes the stories of Psyche, Echo, Eurydice & Persephone & weaves them together to create one big tale of love & truth.

“When your mothers tell you to love and appreciate your body it isn’t just to get you to shut up. They know that when you are old you are going to feel exactly the same way inside that you do now. We try on different dresses, different selves, but our souls are always the same — ongoing, full of light.” — Psyche In A Dress

The Rose & The Beast is a collection of fairy tales respun with FLB’s thread. Modern & dark, they are very different to the stories we were told as children. In this version of Sleeping Beauty, she pricks her arm with a heroin needle, while Red Riding Hood’s wolf is her creepy stepfather. The Snow Queen is a sex goddess who lives in a marble mansion, & Bluebeard is an L.A. bigshot & serial killer.

Ruby is a collaboration piece between FLB & Carmen Staton, & is quite different to her other work. Ruby grows up in the midwest United States with an unpleasant family, but then moves to England to find her soulmate. While she’s there, she learns that you can run from your past but that it will continue to haunt you until you confront it.

Quakeland is coming this year. It follows Katrina, a girl who has lived through a seemingly-endless stream of disasters, including 9/11 & a tsunami. She is on the hunt for stability & intimacy, & as she searches, she finds comfort in her friend Grace & conflict in the arms of a narcissistic yoga teacher (!). I am looking forward to reading this!

Nymph is a short collection of erotic stories (heterosexual, with one lesbian tale). They are all connected together but totally different. A surfer finds solace in a wheelchair-bound girl who turns out to be a mermaid, a girl discovers that everyone she sleeps with goes on to find true love, a stripper with a cat’s face can’t leave her job unless she finds someone who truly loves her, & more. The stories are not insanely raunchy; there is a still a layer of FLB “mist” that stops it from being graphic or crude, but there is definitely a sexy edge to this book that her others don’t have.

Girl Goddess #9 is another book of short stories! This is a fantastic read & another one of my favourite FLB books. In these nine stories you float through FLB’s world, meeting rock stars, pond nymphs & blue ghosts that live in closets. I love these stories & they are the perfect length to read to your friends.

Wasteland is the story of a brother & sister, Marina & Lex, who are best friends. In fact, they love each other so much there is barely room for anyone else. One night things go too far, & after sleeping together, they are both stricken with guilt. Lex commits suicide & Marina is left to pick up the pieces. FLB does exceptionally well dealing with these very difficult subjects, writing with tenderness & love & vulnerability.

I Was A Teenage Fairy is a story about Barbie, a teenage girl whose pushy mother is is obsessed with turning her into a model sensation. Barbie’s only friend is a sarcastic fairy called Mab, until she meets Griffin, another child model, with the same secret…

“If Los Angeles is a woman reclining billboard model with collagen-puffed lips & silicone-inflated breasts, a woman in a magenta convertible with heart-shaped sunglasses & cotton candy hair; if Los Angeles is this woman, then the San Fernando Valley is her teenybopper sister. The teenybopper sister snaps big stretchy pink bubbles over her tongue & checks her lip gloss in the rearview mirror, causing Sis to scream. Teeny plays the radio too loud & bites her nails, wondering if the glitter polish will poison her…” — I Was A Teenage Fairy

Ecstasia revolves around rockstars Calliope & her brother Rafe. Their only concern in life is that they are starting to get older in a city that only worships youth, & where aging means that you have to retreat underground to live in the sewers.

Primavera is the daughter of a couple from the book Ecstasia. Primavera was raised in paradise but longs for adventure, so when a man arrives at the house, she makes her escape. She ends up in Elysia, the city of youth, & she braves several dangers before coming out the other side with a stronger self of sense & love.

Echo‘s parents are so in love with one another that she feels constantly excluded, & so she decides to try to fill the void. On her way, she deals with an eating disorder, vampires & angels & her mother’s terminal illness.

“Echo’s story of salvation will appeal not only to eyeliner-wearing club kids, but to any older teen who’s ever felt insecure and lonely in a world full of kissing couples and Hallmark holidays.”

Violet & Claire is about two friends navigating life. Violet is a disciple of film — she worships Tarantino & is always working on her screenplay. She meets Claire at school — a girl with fairy wings sewn onto the back of her Tinkerbell t-shirt — & decides to cast her in her movie. Their friendship is strong, but as Violet starts working & Claire retreats to the desert, things begin to change.

“My books talk about tolerance,” Block says, “though I never consciously think of themes like that as I write. I guess my general theme is the value of love and art as healers. That you must face the darkness, acknowledge it and still have hope. I think that is what is important in life.”

Which Francesca Lia Block girl are you? from Quizilla

Strange Brew, an article on FLB by Salon

“Making Cities and Then Making Them Crumble”: Francesca Lia Block’s Place in the Young Adult Novel

An interview with FLB on gURL.com

If you want a new RESULT, you're going to have to

It's my birthday! 🥳💕🎂 THANK YOU for being

A BRAND NEW vision board idea — I mean really, g