From Soho With Love! 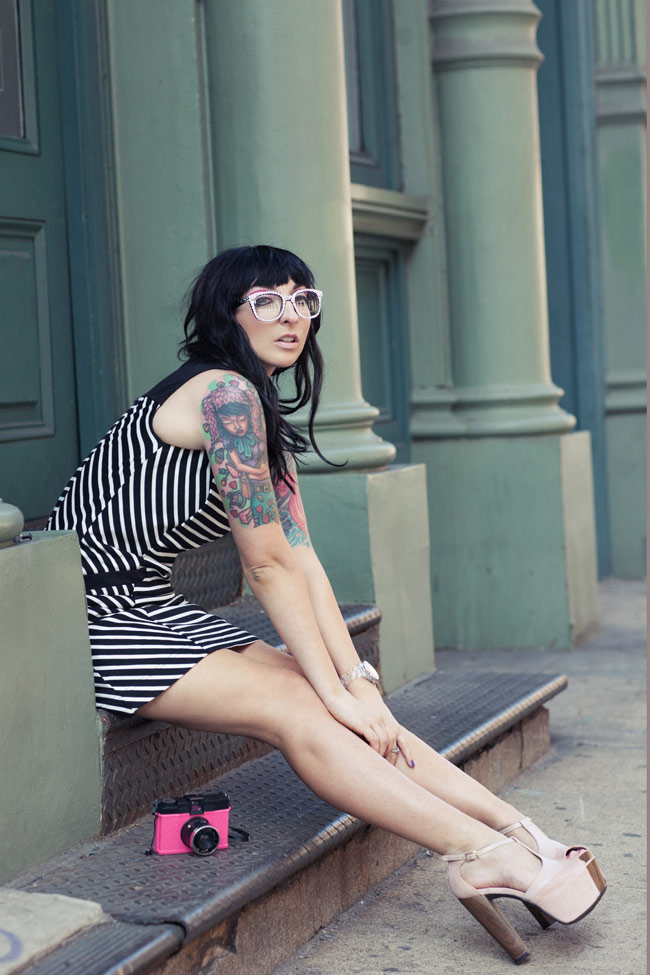 Hello from a stoop in Soho! These photos were taken on Thursday, one of the nicest days New York City has had in ages. The weather was perfect for wobbling around precariously on cobblestones!

Mike & I spent today (Saturday) bicycling around the city. It was our first springtime ride & actually, the first time we’d been riding together! It was fantastic: we rode from the East Village along the East River, down to Battery Park, & up to the West Village before cutting across & heading home. We ate sandwiches while looking at the ships, saw a real live turkey in Battery Park (!!!) & climbed to the top of the Irish Hunger Memorial. We had such a wonderful time, definitely our new favourite activity! That kind of weekend coupled with sundresses like this makes me think that this will be a very auspicious summer indeed! 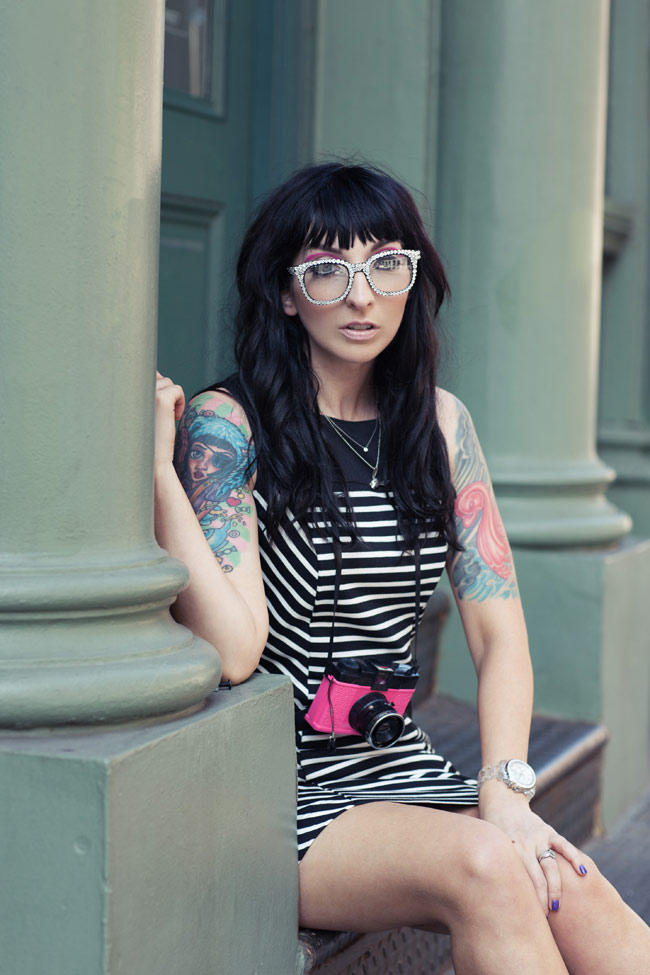 I don’t really feel like Gala in these photos. I feel like a spy from the 1960s, sent to New York City to pose as a tourist… & steal back top secret microfilm! Maybe it’s just that we watched O.S.S. 117: Lost In Rio the other night, or maybe it’s the spectacles… Who knows?!

Either way, I am completely obsessed with these glasses. I bought them ages ago (on Etsy! Support independent designers!) but barely wore them. When I packed them in my suitcase for Las Vegas, though, they became the favourite accessory of Kat, Nubby & I… & now I can’t get enough of them! I’ve been wearing them on the crown of my head for a couple of days now. In fact, they ended up being the focal point of my Badoo portrait! 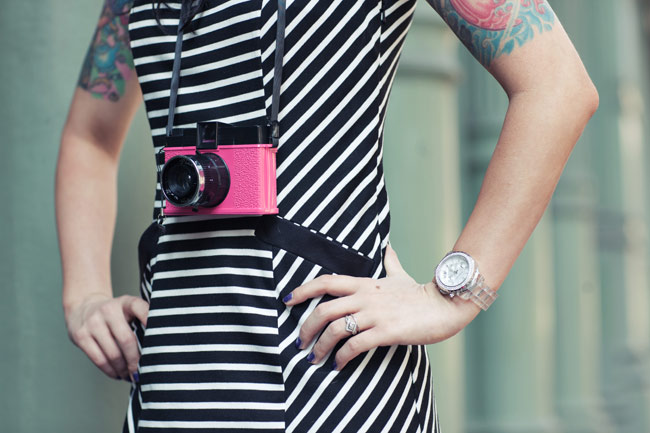 This dress is so simple & cute — you just throw it on & go. I should know, because I CHANGED INTO IT ON THE STREET! Yes! In the middle of the footpath! Thankfully, Saint Lydia always comes to my rescue, & held up an enormous scarf as some kind of makeshift changing room… The things we do for love blogs!

But the dress was a gift from Very.com, & it connects me — sort of — to Tyra Banks, which brings me — almost — one step closer to Jade! (Oh girl!!!) Here’s how we connect the dots: Very.com is a major sponsor of the current season of America’s Next Top Model, & they’re also collaborating with me! Okay, maybe it’s a veeeeery loose, roundabout sort of connection… I probably won’t be “smizeing” for Tyra anytime soon. But I can pretend!

So I’m going to show you two outfits that came from their Love Label — one today, & another next week. I think this one is so cute: very easy & sassy. 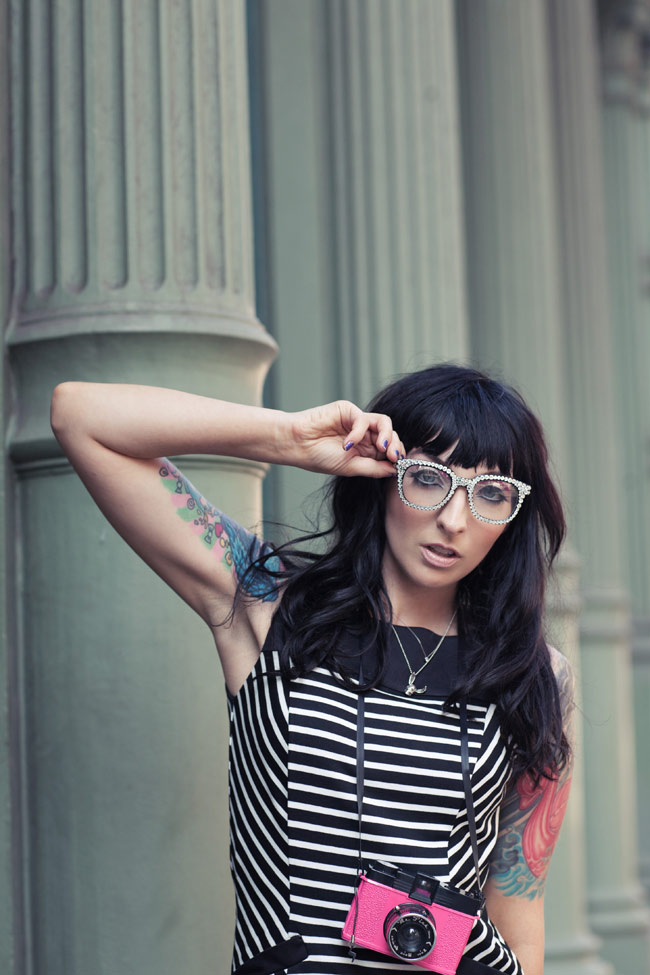 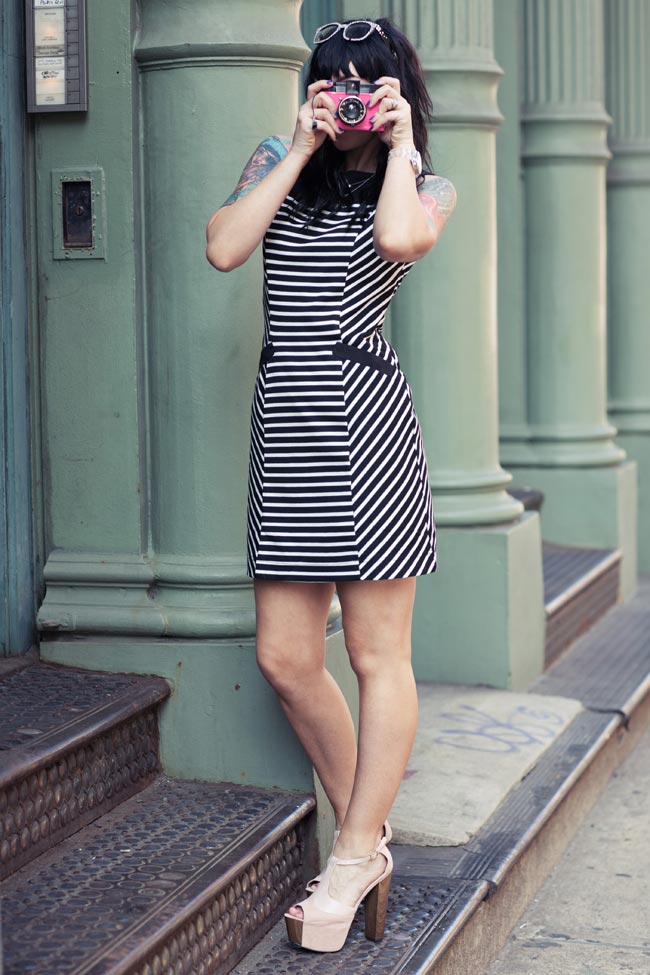 Bedazzled glasses from Tequila Star (yes, you DO need a pair of your own!)

Don’t you think this dress is VERY Bond girl, though? I do. I can totally envision some swingin’ 60’s vixen wearing it with go-go boots & a big beehive! 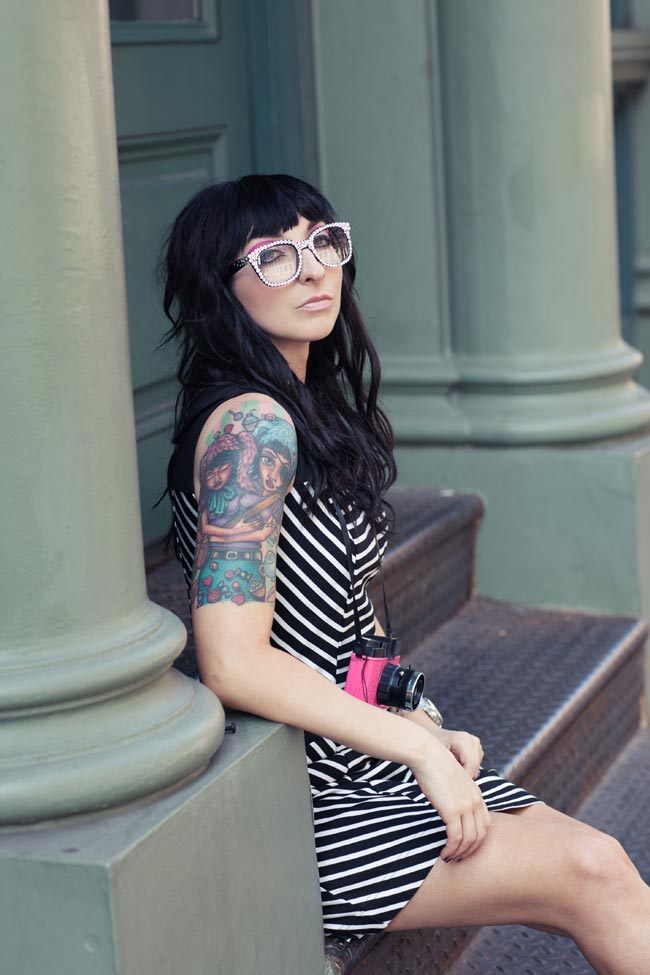 This is my “just chilling in Soho, waiting to kidnap a diplomat’s daughter” look. See? I told you I was spy-crazy! 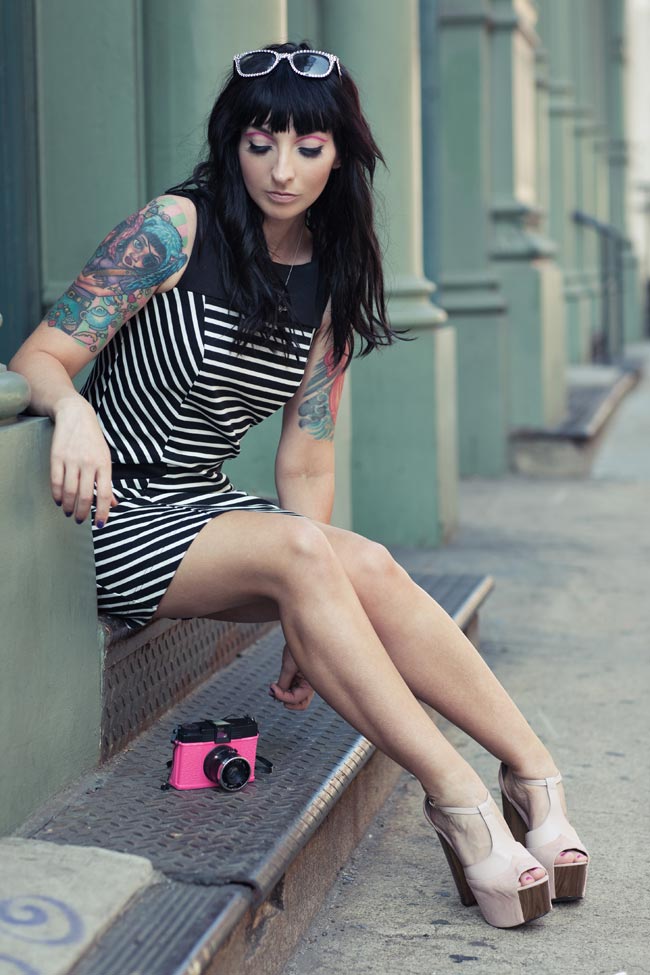 I love a good nude heel — they make your legs look ultra-long! They solve a lot of problems too, because you can basically wear them with a dress of any colour. Even better, they make you look like a giant! 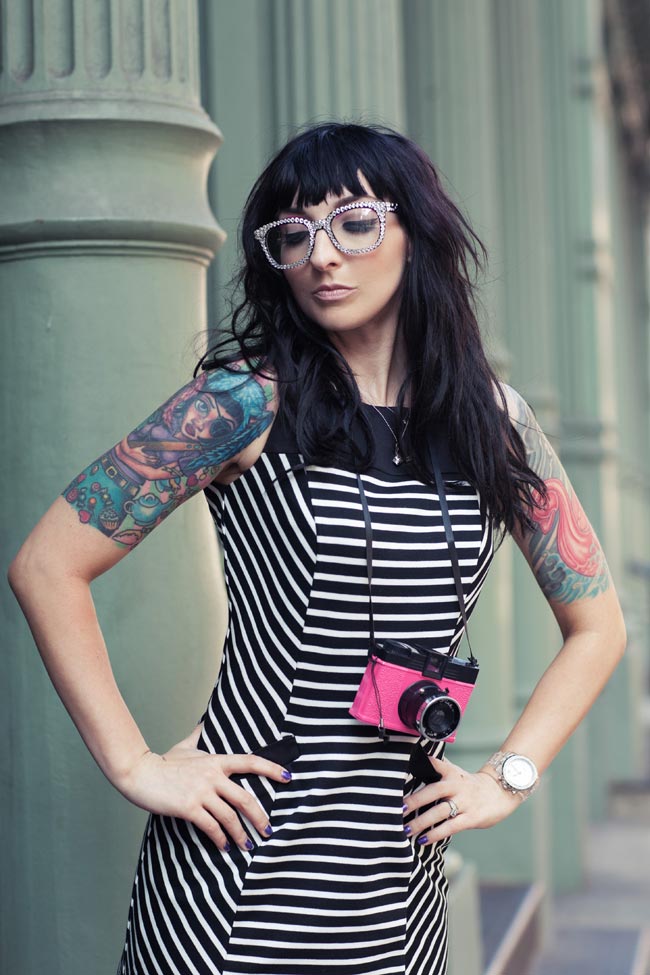 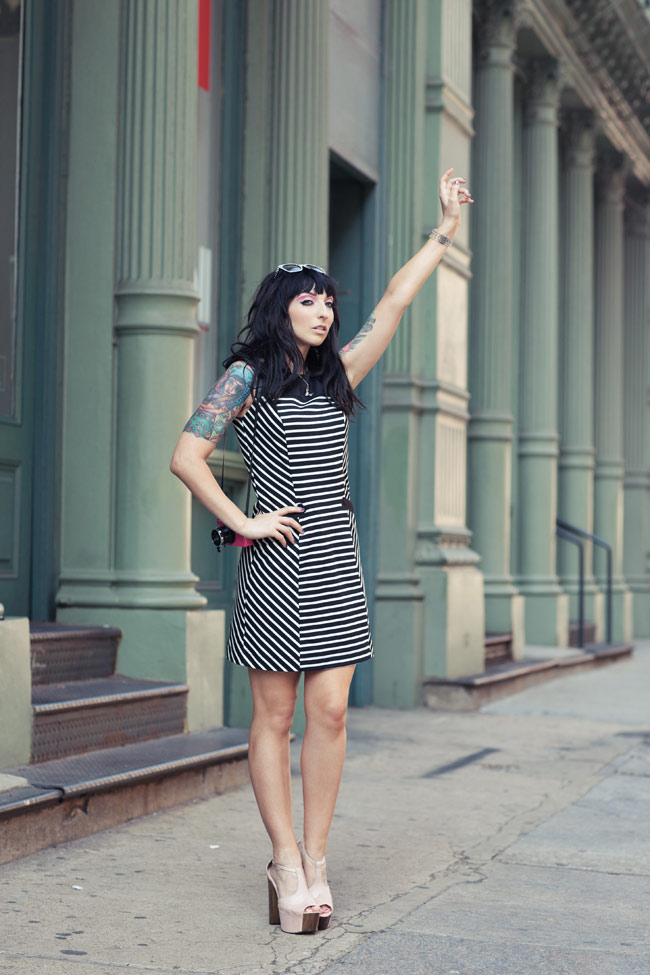 …Mission complete! With top secret microfilm in hand, it’s now time to high-tail it to the airport…

In other words, yes, this is me hailing a cab! I always wanted to be able to whistle for one, though, & this week, my trainer, Alex, told me he is going to teach me how to do that whistle-with-your-fingers-in-your-mouth thing… A proposition I am very excited by!

Just you wait… Maybe one day, I’ll be whistling at you across the street!

Photos by Lydia Hudgens, who always makes shooting a breeze. A pleasure! Also, much love to Brianne at MAC Cosmetics Soho, who did an incredible job with my make-up!

« Things I Love Thursday: Here Comes The Sun…
Invasion Of The 1960s Supervixens! »