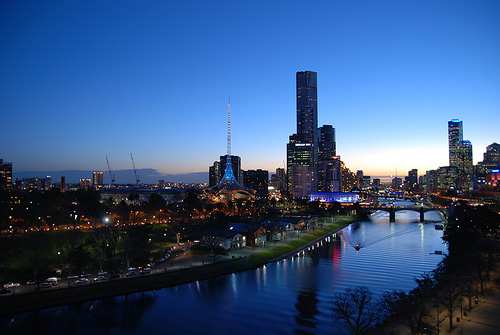 “I just found your site and it came at an opportune time as my husband and I are stopping off in Melbourne for a week on our way to London and well, I have never been to Australia. I was wondering if you have any recommendations or things I must do/visit in Melbourne? I have a darling friend who lives there and my husband has family but … I was looking for more colourful (and fashionable and … from-a-girl) assistance. Thank you!”

Melbourne can be a difficult city for visitors. While the main streets are obvious to everyone, they’re not where the really interesting things are. Melbourne requires a bit of effort — think of it as a treasure hunt. Go into weird alleyways, peer into arcades, allow yourself time to wander through & really experience the place.

Myer department store is fantastic. Myer & David Jones are competing department stores RIGHT next to one another. It’s very strange in that both stores span a few blocks, with streets dividing each store section. They are much of a muchness, though I prefer Myer — I think their range is better & the sales staff are all very competent & pleasant. Their “Basement” store, which, funnily enough, is in the basement of the store, is pretty cool with a selection of reasonably-priced clothes, shoes & accessories. It is also enormous. Until TopShop & H&M come to Australia, this is about as close as it’s going to get. I also recommend Myer’s women’s shoe section — go to the store between Bourke Street & Little Bourke Street, catch the elevator up to level 1 & you’ll find Manolo Blahnik, Alessandro Dell’Acqua, Marc Jacobs, Emilio Pucci, Givenchy & a whole lot of other very nice brands. Their selection of Blahniks can be small, but as far as I know they’re the only place in the city selling them.

If you’re dying to try on Christian Louboutin heels, the place to go is the David Jones shoe department. They have a small (but extremely sexy) range of Louboutins. Other things in this department store which are worth checking out include their food hall & their floor of cosmetics (they have a Napoleon Perdis counter as well brands like Kiehl’s, Mecca, philosophy etc., which Myer doesn’t).

Miss Louise on Collins Street is also a proprietor of great little homes for your feet. (By which, of course, I mean shoes.) It’s the city’s premier shoe shop. Expect to come out with your wallet feeling significantly lighter — it is definitely worth checking out! While you’re on Collins Street, if you want to do a little luxury shopping, you are in the right place. Chanel, Bvlgari, Louis Vuitton, Hermes & Gucci all have shops here. Don’t expect a lot of personality, though. It is a pretty boring part of town.

Some other shops I like in the central city include Cactus Jam (lots of amazing things, including Chloé shoes!), Smitten Kitten for luscious underwear, Douglas & Hope for quilts, bags & other random loveliness, Belinda in the GPO (stock includes pieces by Yohji Yamamoto, Issey Miyake, Diane Von Furstenberg, Costume National, Jimmy Choo & candles by Diptyque), Genki (lots of weird cute things, including FRUiTS, Street & Lula magazines), Aesop for beautiful skincare, & Alannah Hill for BEAUTIFUL clothes, shoes & hats. (They also get extra points because at the moment, whenever I walk past they are absolutely blasting Amy Winehouse.)

Brunswick Street is a pretty interesting area, but it depends on what you’re looking for really. I think Brunswick Street is like a much bigger version of Cuba Street (in Wellington), with less places to sit down. I guess I’m just not interested in that stuff anymore, it’s all a bit cookie-cutter to me. For those of you who are, however, Brunswick Street is where you go to kit yourself out in alternative fashion. The one thing I really love in that area is Polyester Books.

If you prefer old things, try Circa Vintage for genuine, beautiful vintage (Gertrude Street) or Episode, which is kind of like a big, secondhand department store on Sydney Road. There’s also the infamous Retrostar on Swanston Street.

For books, I suggest going to Metropolis. It’s up a few flights of stairs, but belieeeeve me, it is worth it. They have a fantastic selection.

Also, read this for extra credit: The Vogue Forum & their members thoughts on Melbourne shopping (some good suggestions). 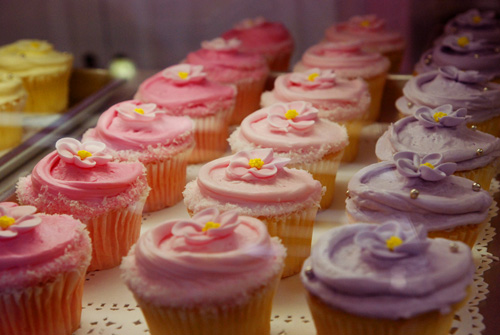 Crabapple Bakery does absolutely incredible cupcakes. They have a shop at the Prahran Markets, & are open Tuesday, Thursday, Saturday & Sunday. If you don’t want to hike out to Prahran (a pretty short tram ride from the central city), there’s a cute little cafe called Switchboard (hidden in the foyer of the Manchester Unity building, 220 Collins Street) in town which sometimes has a small selection of Crabapple’s cupcakes. 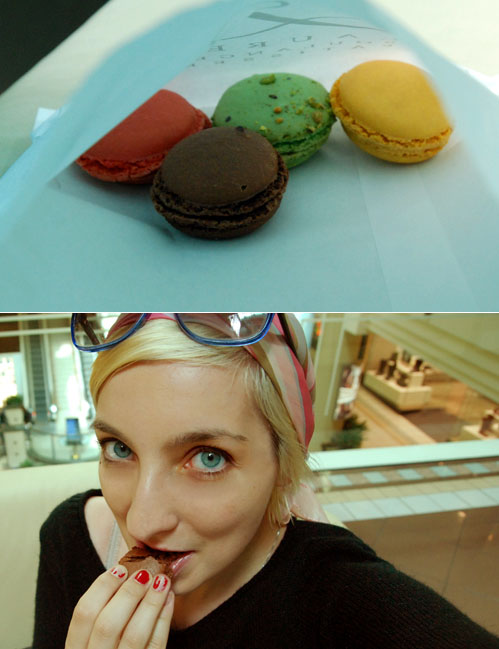 If you’re after macarons, you should hit up Laurent Bakery. They come in chocolate, coffee, lemon, pistachio, strawberry & vanilla flavours. (Very few places in the world do a decent macaron, as evidenced!) There are a few Laurent locations scattered around Melbourne, but probably the easiest one to get to is in the city, at 306 Little Collins Street.

There are a lot of places specialising in chocolate in Melbourne. My favourite is Koko Black in Royal Arcade (335 Bourke Street). Koko Black is a lovely little salon serving incredible chocolate drinks & food. Their chocolate coffees are… dare I say it… exquisite. They don’t use powder mixes, it’s all melted dark Belgian chocolate. Drool. Go there with someone you like & share a Belgian Spoil platter (chocolate cake, chocolates, shortbread, ice-cream & chocolate mousse) or a hot chocolate affogato. Sit upstairs & look out over the arcade! Other places to check out include San Churro on Brunswick Street — great churros! — & Max Brenner where they do lovely chocolate shots & waffles with strawberries.

My favourite restaurants in Melbourne are Cecconi’s Cantina & Bistrot d’Orsay, on Flinders Lane & Collins Street respectively. The best pizza in the city is at Cafe Tono, on the corner of Bourke & Russell Street. It’s New York style with a thin crust, & their American (pepperoni) is to die for. It’s also only $11 for a takeaway large pizza, which will easily feed two people. Genius!

For a fun, kitsch evening, check out the Soda Rock diner in Prahran. They do great burgers & genuine old-fashioned milkshakes, & they have jukeboxes & singing waitresses! I love it.

I am actually not a big drinker, & there are more bars in this city than I could even begin to write about. See Bar Secrets, this & this.

My favourites are the Melbourne Supper Club & Sister Bella.

If you’ve been getting your hands dirty while you dig into Melbourne, maybe it’s time to get a manicure! My favourite nail salon is French Pink on Elizabeth Street in the CBD. It’s run by a lovely woman named Kara who consistently gives me the best manicures I’ve ever had. I recommend booking, especially if it’s the weekend!

When you see women with great eyebrows patrolling the streets, odds are it’s probably the work of Afnaan at Arch Enemy, 270 Russell Street. If you have a waxing or plucking emergency, she’s your woman! You’ll need to make an appointment (in advance) to see her, but she is worth every penny & the sweetest girl ever!

The Rooftop Cinema is an amazing Melbourne experience. Situated smack-bang in the centre of town (on Swanston Street), during summer they screen great films at night. Book a ticket, take your seat in a glorious deckchair on a floor of astroturf, & enjoy. (They also do really good burgers, & have a late liquor license.)

Visit Outre, an art gallery with AMAZING work from people like Mark Ryden, Fawn Gehweiler, Audrey Kawasaki, Sas Christian, Shag & Kozyndan. It’s on Elizabeth Street in the CBD, so there are no excuses, hop to it!

You can also visit the Queen Victoria Markets (largest open-air markets in the Southern Hemisphere, selling produce, clothes, etc. — it’s also home to one of my favourite shops, Madame Pompadour), the Royal Botanic Gardens, the Arts Centre & the National Gallery of Victoria. 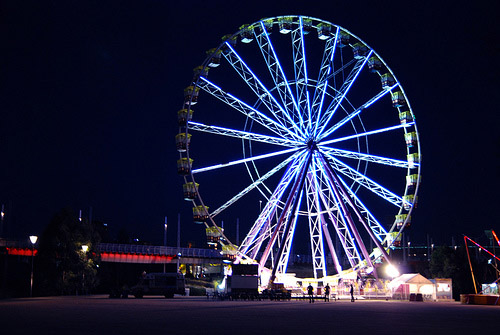 Also, at the moment, Australia’s largest travelling ferris wheel is operating in Birrarung Marr, next to Federation Square. It will be in town until the 8th of January 2008. It is about $7 a turn & it’s major fun!

Metlink Melbourne is probably going to get you from point a to b. The Melbourne tram system is pretty interesting!

If you need somewhere to stay, The Westin on Collins Street is fabulous. The rooms are gorgeous & they have incredible facilities. Of course, this comes at a price, so it will all depend on your budget! The Grand Mercure Hotel is much cheaper & while the foyer & hallways aren’t too impressive, the rooms are huge & well-appointed. Other than that, The Hotel Windsor looks fantastic (they have afternoon tea & murder mysteries!) & the Adelphi Hotel has a glass-bottomed pool which stretches out across the street.

If you have a bit of time to spend in Melbourne, you might want to buy a little pack of cards called “Shopping Secrets”. There is a range of them, each specialising in something different: restaurants, bars, shopping, etc. They’re $9.95 a set & have 52 cards inside, each one featuring a cool place to go. They re-issue them all the time so they’re current, & they’re fantastic. They’re also for sale all over the place, but bookshops are your best bet.

Another thing to keep in mind is that Melbourne is almost always in the middle of some kind of festival, whether it’s film, comedy, fashion or cultural. Keep your eyes on That’s Melbourne for the latest events & hoopla!

Finally, if you happen to be in Melbourne on a Sunday night, tune into Channel Ten to watch my #1 Australian crush, Rove McManus. If you’re really keen, try & get tickets to the live taping!