Getting The Most Out Of Your Fashion Magazines

To me, it has always seemed like a waste to buy a magazine & then, after reading it, to relegate it to your bookshelf, or worse, to the recycling bin. They are so expensive, especially the ones with a smaller print run. I am crazy about buying magazines, I spend hundreds of dollars on them & rarely throw the entire thing away, so I am talking from experience!

Don’t be afraid to tear up your old magazines, or to keep the best pages & scrap the rest. It’s mostly advertising anyway. When it comes to magazines, unless you have a fantastic memory, you will never remember where to look in which issue of what magazine to find that amazing pair of shoes, so it’s much better to have a small stack of your favourite pages than hundreds of magazines piled to the ceiling.

Here are some ways to get the most out of your fashion magazines.

Start keeping a fashion lookbook
Or a scrapbook of the things you like. The individual purpose of the book will be different for everyone — for some people it will be about clothes, for others it might be about writing, design, type-setting or page layout. (If you like all these things, maybe you could buy a few scrapbooks.) Buy a big scrapbook, grab some glue or tape & a blade, settle down with your stacks of magazines & start cutting them up. This can be kind of time consuming, since I find it really hard not to read articles in magazines, but it’s a good way to spend an evening & at the end of it, you will have an amazing scrapbook & far less magazines. Yay!

Frame your favourite covers
Some magazines really do have beautiful covers — too beautiful to just sit on a bookshelf, unappreciated. Use a blade to slice the cover off, & then you can either frame it or hang it in a set. When it comes to a series of pictures on the wall, I like uneven groups the best. Three or five pictures looks much better than two or four to me — more dynamic. Who’s to say you can’t have a series of glamorous old Vogue covers framed along your hallway? No one, that’s who! 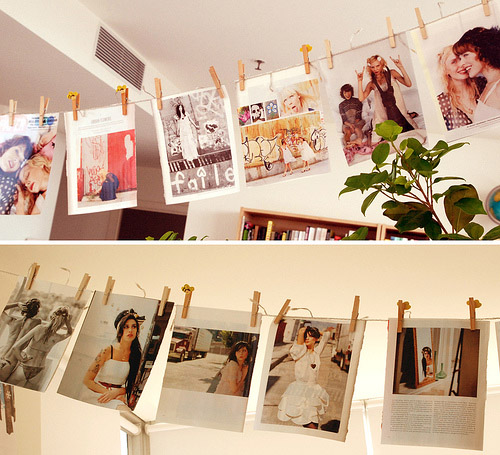 Put the best pictures on display in your house
Having my favourite photoshoots from magazines hanging up makes me feel so inspired I can’t even begin to explain it. You can just hang them in groups, or you can do like I do & peg them up along strings. I have two lines going across my living room, one of clear fairy lights & one of fishing line. The clearer you can make the lines, the better — a black rope or anything like that will look quite heavy & you probably don’t want that. I like to use plain wooden pegs (& some with bumblebees on the top!) & I just change the pictures when I get sick of them. Doing this is also a good way to subtley divide a room.

Buy magazine storage boxes & start organising
IKEA has magazine storage boxes that you buy in packs of three & then assemble yourself. They are fantastic, cheap & come in all sorts of designs. Mine are plain white & I’ve put a heart-shaped Post It note on the front of each box, saying which magazine it is (Lula, Vogue, Harper’s Bazaar). My shelf of magazines is also organised alphabetically but then… I am a Virgo.

Make envelopes from the pages
It’s very easy. Take two pages you like, tape along three sides, voilà! You can fold the top down like you would for an ordinary envelope, or just tape along there when you’re finished. I would also suggest ensuring that one side of the envelope has a light-coloured, reasonably blank space where you can write the recipient’s address. If not, you can always paint a white square & then write the address over the top, or stick an index card on the front. You get the idea!

Make origami cranes
I have never been good at origami but some people are clever with their fingers & more power to them! (I once had a friend who would make me an origami crane out of his bus ticket every time he came to see me. I kept them in a little row on my bookshelf.) Here is how to make a crane, though you will need to fold your magazine page & cut it to make a perfect square.

Donate them to people who need them
Women’s shelters, doctor’s offices & family planning associations always want more magazines. Usually, being in any of those three places is pretty nerve-wracking. Magazines are a welcome respite from constantly thinking about your abusive husband, infected big toe or broken condom. Eep! So if all else fails, give your magazines away. It’s a great way to de-clutter & contribute something positive at the same time.