How To Be The Life Of The Party (Podcast) 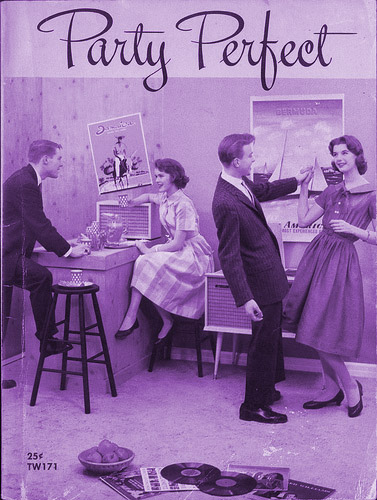 Gala Darling — How To Be The Life Of The Party (MP3)
Click the link to listen now, or right-click to save & listen later!

The concept of a party can be seriously polarising. Some people live for them, while others would prefer never to be invited to one again. For those who view festive occasions with a mixture of fear, anxiety & nausea, it can be very easy to shut yourself in the house & consider your social life cancelled until further notice. However, sometimes we just have to attend. It could be a party held by your best friend, a baby shower, or an engagement party — & generally, it is pretty bad form not to turn up to these events.

For anyone in the grips of Party Panic, try following my lead & you’ll see that parties aren’t really as bad as all that!

Dress
Dressing for a party is another one of those situations which is greatly improved by having a collection of daily outfit photos. Go through them, select a look you like, & then dress yourself — it couldn’t be much easier. If you’re not sure what the crowd will be like, or how everyone else is likely to be dressed, ask a friend who has also been invited. If you’re going alone or your friend/date is equally clueless, just wear something which makes you feel good about yourself.

Depending on the crowd & age group of the other attendees, unusual things could happen at the party. Try to dress in a way which prepares you for these eventualities. Will you be drinking or partaking of substances? Is a long walk on the cards? How about dancing? Are the other guests the sort of ruffians that are likely to spill or throw drinks? (If the answer to this question is yes, maybe it’s time for new friends!) You get the idea. You might also like to take cosmetics to freshen up (foundation, eyeliner, blotting papers), breath mints, cash & your cellphone.

Interaction
Talking to other people is usually the most terrifying part of a party. It can be really difficult to start a dialogue with someone you’ve never met before. Try to remember that about half of the guests are as scared as you, & everyone has their own neuroses & self-doubt anyway. People hide it in different ways — by getting really blasted, by being rude or snobby, by hiding in the corner, by trying to be the most obnoxious person in the room or by spending a lot of time in the kitchen. So, just know that you are not alone. The host is also probably quite petrified. All is not lost.

When you get there, find the person who invited you. Hopefully they will tell you a place to put your coat, explain where the bathroom is & get you a drink. If not, just ask! Engage them in conversation but be aware (especially if they are the host) that they probably have other people to attend to as well. If you’re still feeling shy, ask them who they would recommend you talk to next. They might have an idea of someone who you will hit it off with!

Even if you feel like your knees are knocking together so loudly that it is providing musical accompaniment for the room, if you see someone standing alone, go & talk to them! They will be grateful for the company & from there you have a ‘buddy’ to keep you occupied. Ask them questions — this is the secret to successful small talk. People love to talk about themselves as long as they feel like the other person is genuinely interested! Ask them their name, how their night is going, how long they have lived in (insert city here), what their passions are, what they want to be doing in five years time, who their favourite artists are, what they dressed up as last hallowe’en, if they collect anything, whether they have a celebrity crush, etc. Try to go naturally with the flow of the conversation, rather than just providing questions point-blank. If they have a clue, they will soon be asking you questions as well!

Don’t be afraid to be honest! If you’re still nervous about the party, it’s alright to say so! You never know, they might feel exactly the same way, & then you’ll have something in common, see?

If you have inadvertently been saddled with the world’s most banal person, don’t feel obligated to keep them company. Life is too short! Make your excuses (“I’m just going to dash to the bathroom” / “Hmm, I seem to have misplaced my bag” / “Oh, I think I’m going to be ill”) & escape! Go to another room if you feel uncomfortable having ditched The World’s Most Boring Man (or whomever).

I believe the secret to being charming is being positive, flirting a little bit with everyone & doing your best to stay away from tired topics like politics, work or online gaming. It’s really not that difficult.

Calling it a night
Do your very best not to outstay your welcome — though if you started the night with a heart full of trepidation & are now enjoying yourself so much you didn’t want to leave, congratulations! If the amount of guests has halved, it’s probably time to call a taxi (or your driver, darling). If the host is yawning & talking about how she is planning on going for a run at the crack o’ dawn, this is your (not so subtle) cue to toddle on home.

Offer to help your host clean up if you’re the type that enjoys that kind of thing. Otherwise, be sure to thank them profusely for having you before leaving.

If you’re pretty sure you’re not going to be able to hack it for long, remember that Anna Wintour is famously known as the world’s most efficient party guest. She never stays longer than 10 minutes — unless she’s the host. (She likes to be in bed by 10:00 — one assumes this is so she can wake up at 5.45am for her rousing daily tennis game!) Feel free to take a page from her book. Make an appearance, speak to the people you came to see, then depart. There is nothing wrong with doing this. Most people will think you are delightfully eccentric, & those who think otherwise are not worth bothering with!

Additional tips
If you don’t drink or are trying to stay sober, having a non-alcoholic drink in your hand will make you feel more like you fit in. No one has to know that you’re actually sipping lemonade or ginger ale! Often in social situations I feel like I need something to do with my hands — drinks serve this purpose, as do cigarettes, even if you’re not a smoker (don’t light it, just use it to gesticulate wildly).

Before you walk into the party, decide that you’re going to be open & let people in. If you go in there anxious & pent-up, other people will feel this & stay away from you, which will probably make your time there rather unpleasant. If you are the type of person who gets so nervous they feel like they’re going to throw up or pass out, use one hand to tap the underside (fleshy bit) of your hand while you think about it. It sounds crazy but this is an acupressure point which will — I promise — remove any feelings of nausea or dizziness. (You can do this in time to music if you fear looking like a nut.)

If social occasions bore you, set yourself tasks or make the whole thing into a game. See how many people you can make smile. Try to take a good photograph of everyone in attendance. (People love anyone with a camera, especially if you’re good with it.) Choose a number & decide to make the acquaintance of that many people. You get the idea.

Try to avoid getting totally blitzed, “getting funky” with anyone who has a partner, or exiting a car without underwear on!

If all of the above tips aren’t working, here’s an oldie but a goodie. Pretend you are someone else. Like Madonna, or Diana Vreeland, or your friend who always has a fabulous time at parties. Just imagine you are in their skin, then act accordingly. This is a pretty foolproof way of having a good time.

Above all, be friendly & helpful & inviting, & you’ll be having a blast in no time!

OOH BABY I DON'T KNOW ABOUT YOU but this has been

...And since we have so many new babes here, it’

END OF AN ERA my babies 💖💖💖 This house bi