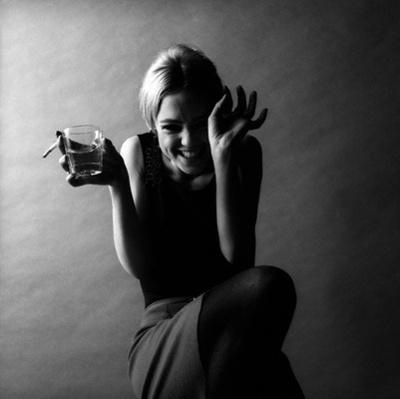 Edie Sedgwick, ’60s It girl, has experienced a bit of a resurgence. Sienna Miller played Edie in Factory Girl, released early 2007, but even before then there was a rising interest in this girl who was Andy Warhol’s muse, a girl who spent her way through her entire inheritance in six months.

While it wasn’t all bread & roses — Edie battled with drug addictions & eating disorders her whole life — her aesthetic was ground-breaking, inspiring a generation of girls to cut their hair short, experiment with dramatic makeup & don black stockings!

So, how can you mainline a bit of Ms. Sedgwick’s style into your look? Not everyone is stick thin or suited to platinum blonde hair, so it’s best to just take little pieces & see how they work with your style.

This cotton t-shirt leotard from American Apparel is super-Edie, the sort of thing she would have worn with a black mini, black tights & flats. Edie would practice jazz ballet for several hours every day, I think because doing physical activity helped calm her mind. Most of her outfits evolved from this pasttime — she would just throw a big coat or loose-fitting men’s shirt over the top of her leotard & stockings & go out like that.

Wear opaque black stockings with everything. EVERYTHING! I’ve said it before, but my favourite brands are Jonathan Aston & Levante.

Load up on striped t-shirts & sweaters, & anything with a boatneck. I like the damsel striped snap henley, the parallel lines tee & the sparkle striped boatneck tee. Very chic!

If you’ve got the gams for it, wear short black miniskirts & dresses. Minidresses, as well as being very short, tend to be quite close-fitting, so if you feel like your stockings & underwear make you look a bit lumpy, try wearing shaper underwear under your dress. It isn’t sexy, but this stuff is the reason celebrities look so flawless (well, most of the time)… See this for an example!

Wear dark eye makeup. People used to get frustrated at the way it took Edie three hours to do her eye makeup before she went out. With her eyes rimmed in black, she would wear false eyelashes or draw them on. After she had spent her way through her inheritance, she would use watercolour paints as eyeshadow.

Experiment with a beauty mark! Edie had a beauty mark on her cheek, I don’t know whether it was natural or whether she drew it on, but it looked marvellous. In my experience, the best tool for drawing an even, smudge-proof beauty mark is MAC Cosmetics’ Liquid Eye Liner in Boot Black!

Edie loved to wear really long, dangling earrings. They used to call them “shoulder-dusters”, because, as you can probably guess, they would touch the shoulders of the wearer. They can be hard to find, so check Ebay & scour vintage clothes stand at markets for a nice pair. These earrings were her signature, & she would normally wear no other jewellery.

She was crazy about hats — all kinds. I think this leopard mohair beret is very Edie (& would look wonderful with an all-black outfit)!

Edie loved fur jackets & coats. I don’t know whether hers were real — they probably were — but if you’re going to buy the real stuff, make it vintage, okay? My faux-fur coats are some of my favourite things in my closet: incredibly warm but also totally stylish. Scour Ebay & vintage clothing stores for the best ones! 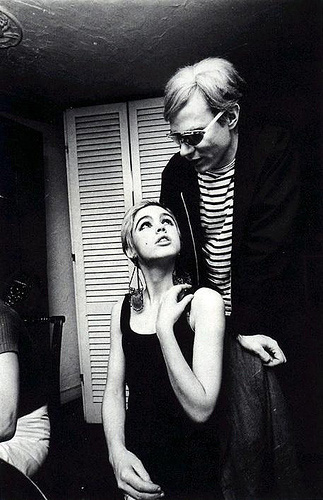 The reason for writing this article, really, is that I was intending on going to this last night:
“Think of a creative genius think-tank where the likes of Lou Reed, Truman Capote, Edie Sedgwick and Bobby Driscoll played with art and amphetamines. This is what Warhol’s tin foil lined Silver Factory evolved into when he took down his silver clouds. Meccanoid will be recreating this madness by throwing an Art After Dark Silver Factory party at the NGV.”

But instead, I ended up dressing as Edie & running around my apartment… (Yes, I know I got the beauty mark on the wrong cheek. Oops!) 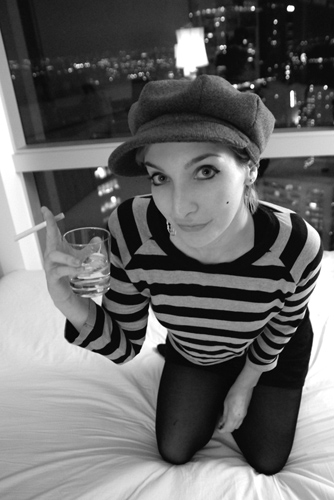 One long dangly earring from Sportsgirl — I had to put in my tunnel, because my newly-pierced lobes can’t have anything but studs in them!

Grey & black striped sweater — I bought this YEARS ago in a shop called Spacesuit, but I don’t remember whether it was in Wellington or Auckland… I do know that it was $20. 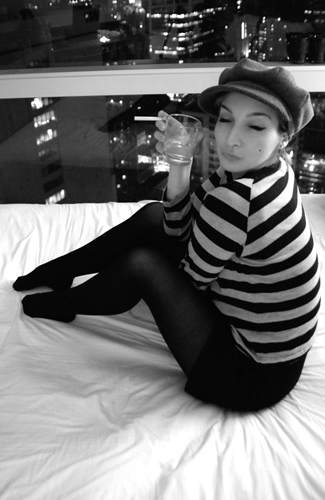 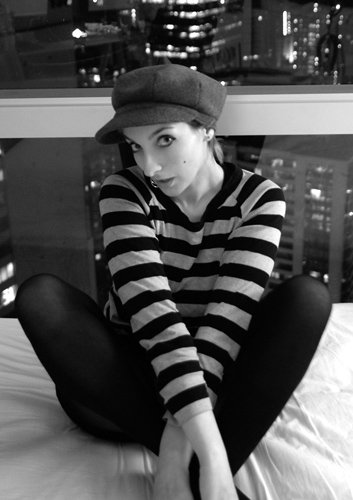 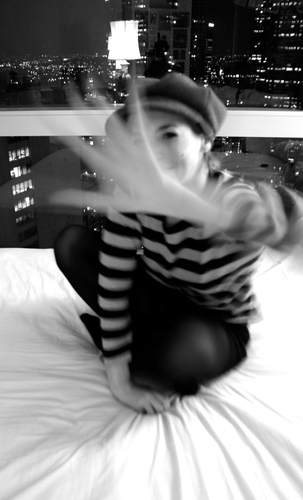 It was fun, anyway!

The Ciao Manhattan Tapes — Edie talking over a collage of pictures & video.

I took a whole lot of pictures which you can see by clicking here!