New York is my favourite city in the entire world. I have been obsessed with it since I was a child — it seemed like the total opposite of the sleepy city in which I grew up. Last year, I visited for the first time, & it kick-started a love affair. You know those ‘I

NYC’ t-shirts which are totally cheesy & awful? Well, when I was there, I wanted to buy one. (In fact, I still kinda want one…) To me, it is the happiest place on earth. It’s big & noisy & neon & alive.

When we were in the cab hurtling towards the city from the airport, I screamed with excitement when I saw the skyline. We arrived on the 12th of September — the night before my birthday — & after we checked into the Hotel Chelsea (love), we walked up to Times Square, where I celebrated my 23rd birthday. It was amazing. 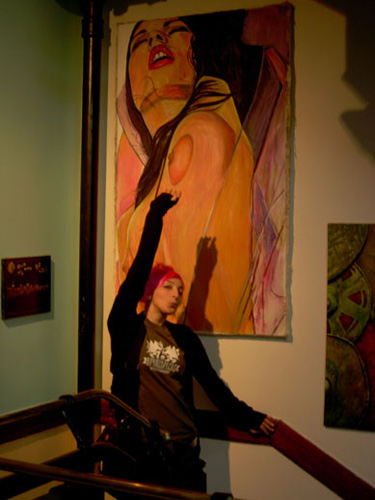 We stayed there for two weeks, & I loved every second of it. The energy there is incredible, the city practically hums with the activity, & it really pumped me up.

The food was amazing. We were staying close to Pizza 33, which I believe does the best pizza in the world (though I may be biased). We ate a lot of hot dogs (mostly at Chelsea Papaya). We found an amazing Chinese restaurant which delivered us hot boxes of General Tso’s chicken (see also) — the most delicious thing I have ever eaten, which I have never found anywhere else. We visited Baskin Robbins at 2am: I was wearing a pink afro wig & I danced with a thug to the hip hop on the radio. I visited the delicatessen next to the hotel every day & loaded up on sugary beverages, peanut-butter flavoured everything, Starbucks in a can, etc. I could eat myself into a coma in that city. 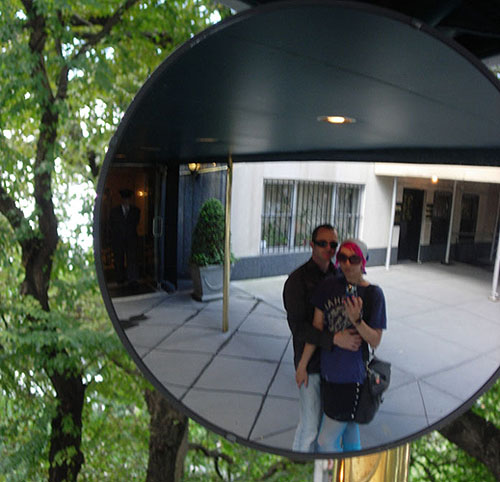 We went to Burning Man after-parties. We celebrated the two year anniversary of the Chapel of Sacred Mirrors. I actually managed to make friends with people in the hotel. I had my half-sleeve done by Tim Kern, genius tattoo artist. I went into the Christian Louboutin store on Fifth Avenue & almost passed out with excitement. (Ditto the Apple store.) I hung out in Patricia Field‘s store in the Bowery, talked about magazines with the sales assistants & was invited to a party (which I couldn’t go to because by then we were in London!). I crawled on the Alice in Wonderland statue in Central Park & made menacing faces at the children so I could get a photo alone… but they kept coming closer because they wanted to touch my hair! There was also an impromptu skate disco in the park that day. 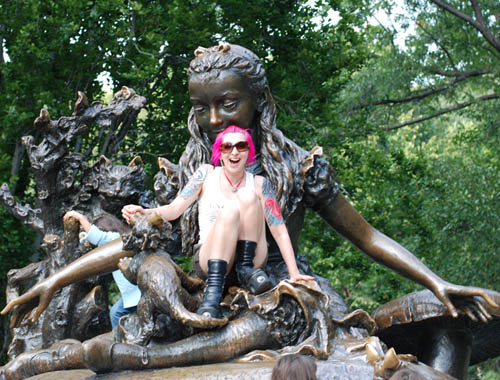 I am dying to go back. I plan on being there for Fashion Week 2008 (which coincides very nicely with my birthday, & Burning Man in Nevada). I want to go to Magnolia Bakery, allegedly the home of the best cupcakes in the world. I am dying for a membership to the Soho House! I want to go inside the Plaza Hotel, which was closed for refurbishments when we were there. I want to spend a lot more time in Christian Louboutin & I want to salivate in Manolo Blahnik on West 54th Street.

Ways to get your NYC fix:

Flick through the pages of Eloise: The Ultimate Edition by Kay Thompson — the most adorable book about a 6 year girl living in the Plaza Hotel!

Laugh your butt off at Overheard in New York: making eavesdropping socially acceptable!

Cringe at American Psycho by Bret Easton Ellis — very gory, but one of my favourites. A quintessentially New York book.

Read the exceptional archives of Siobhan, a fabulous writer who used to live in NYC. She definitely fuelled my obsession with the city for a long time. (Go back to 1999 & read the whole thing.)

Grab a bag of popcorn, pull the blinds & embroil yourself in Ghostbusters! (Bill Murray for life!)

Embrace the shoulderpads in The Secret Of My Success!

Drool over the eye-candy in Hackers (& giggle at the rollerblades).

Turn your brain off & enjoy the silliness of New York Minute!

& of course, the Sex & The City collector’s giftset is always a good way to spend some time! 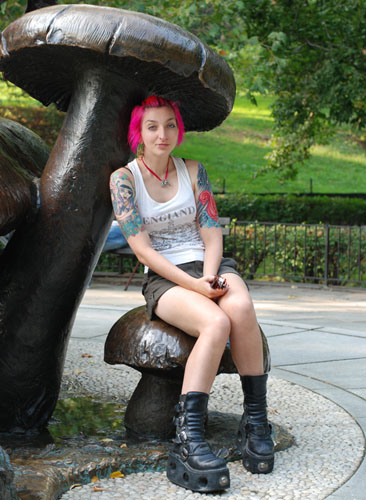 Madonna — I Love New York — a montage set to her song about New York.

A timelapse of the skyline — gorgeous.

Another timelapse — only 5 seconds, but worth it.

The Chelsea Hotel: If These Walls Could Talk — an interview with the hotel’s owner & some history.

Walking through Times Square — technology makes me so happy.

Tell me about your love affair with glorious New York City!