I Was A Teenage Goth 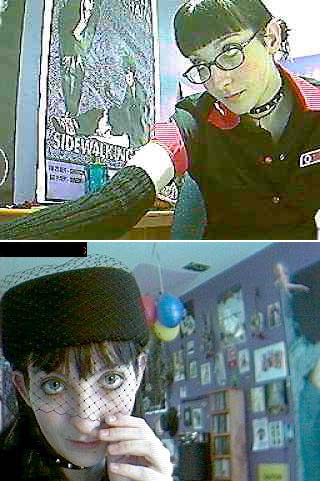 I was a teenage goth. I blame the internet almost entirely.

For Christmas in 1996, at age 13, I received an internet-capable computer. I started off using Microsoft Comic Chat (ugh!) & quickly moved on to IRC where I would fritter the hours debating the finer points of… oh, I don’t know, some nonsense. I met this guy from Arizona who talked a lot about music, & from him I discovered the first few bands I would ever really obsess over: Korn, Marilyn Manson, Tool & Counting Crows.

Of course, with Marilyn Manson comes the descent into wearing all black. I had black lipstick which was California Colours brand — you could buy two for $5, I think, & I had blue as well. I was also quite obsessed with striped stockings. I insisted on wearing a black leather dog collar with red stitching & little spikes coming out of it. Thankfully I had good footwear — in 1997 my father gave me his credit card to buy some shoes, & I came home with a pair of New Rock boots. He said they looked like something someone with polio would wear. (I still have them today, & my love for them has never faltered!)

I guess I decided to do some researching on ‘goth’ or something, & after being horrified to discover that eldergoths (HAHA!) thought Marilyn Manson was a blight on the name of gawth, I decided that if I was going to do it, I would do it properly. I remember asking my parents for CDs for my 14th birthday — I received The Cure’s Standing On A Beach, Bauhaus’ Volume One & something by Siouxsie & The Banshees. Man, best parents ever! My music taste kept growing from there, & I added bands like Hole, Jeff Buckley, Skinny Puppy, Ministry & The Smiths to my obsessions.

My bedroom was violet with a huge poster of Bauhaus taking up half of one wall. There was another poster of comparable size next to it, of Hole. Jeff Buckley & Joy Division & The Jesus & Mary Chain looked out from above my head as I slept. I hung modified Barbie dolls from my roof — one of these had been coloured bright yellow with a radioactive symbol on her belly. She had an arm coming out of her forehead. I stuck pictures of moody-looking models all over my wardrobe doors.

I had hair extensions — pink, white & blue on separate occasions. My boyfriend at the time bought me a black corset. I would hang out with my 30 year old friends & swig green Chartreuse from the bottle. (For this reason, I can no longer stand it.) I remember vomiting green in my bathroom sink after one of those evenings. On the way to school, I would sit in the backseat of my father’s car, listening to Bauhaus on headphones while reading Anne Rice. I was obsessed with Poppy Z. Brite & alt.gothic & alt.gothic.fashion newsgroups. I had websites at members.xoom.com & terrible journals at scribble.nu. Basically, I was a huge dork.

Now it’s your turn to tell me about your teenage embarrassments!