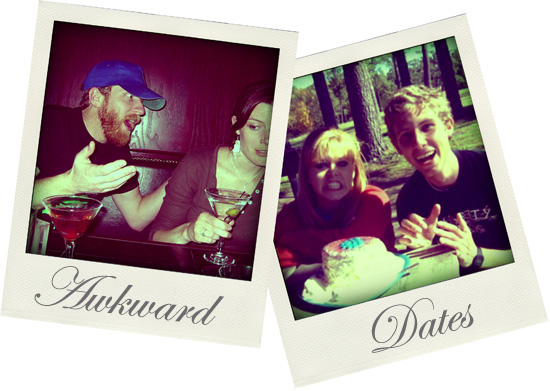 The recent iCiNG Stories about love was such a great success that I thought we should do it again. This time, though, I want to hear about the worst, most hilarious, crazy dates you’ve ever been on.

I haven’t been on a lot of “dates”, being new to America & all that business. New Zealanders don’t really date! I wrote about the weirdest one I’ve ever had, though, in part one of my interview, which I’ll repost here for your reading pleasure!

I met a guy at a fancy party — we were the only people with visible tattoos there, so he made a beeline for me. We started talking & flirting & he was really cute, he was black with sleeve tattoos & stretched ears (why is that SO CUTE on a guy?) & a fetish for high-end luggage (oh, who knows), & he asked me for my number. I gave it to him because I was so caught off-guard, & didn’t actually expect to hear from him. He called me the next day & asked me to go out with him, & after much deliberating, said yes. (I thought, even if this is a total disaster, at least it will be interesting.)

I caught a taxi to his friend’s place where they were having a party. I get there & he is pretty boozed. He tells me he is a personal trainer & insists — INSISTS — that I touch his stomach. It is impressive. I ask him how many sit-ups he does a day. He says 200. One of his friends — another personal trainer — says, “Oh, you’re from New Zealand? How long have you been in America? Your English is pretty good!” I look at him, dumb-founded, & ask him what language he thinks we speak in NZ. He has no idea. I am afraid.

The party was wrapping up so a bunch of us went to catch another cab to some other party. It turned out to be me, him & about four other guys — too many people to fit in one cab. They will usually only take 4 passengers. They were all personal trainers — so weird, so not my thing — so you know, they weren’t small, squishable guys. Their plan was that we would flag a cab & get in & I would sit on someone’s lap or something. About five cabs were like “NO I’m not taking all of you at once”, but eventually we got some guy who just wanted the fare & let us in. The guy I was there with wanted to see the sports results on the touch-screen thing, so he was pressing the screen, but kind of pounding it, not really touching it. The taxi driver got pissed off, & was like, “STOP THAT”, so the guy I was with apologised. But then… he punched the wall between us & the driver REALLY hard! I don’t know why! The driver went nuts & was like, “GET OUT OF MY CAB”, so we got out, grudgingly.

So we’re all walking up the road to try & find another cab, & then we realise that my guy (I don’t remember his name, oops) isn’t with us. We turn around & see him crouching down behind the cab, & as it goes to pull away, he PUNCHES the back of the cab REALLY HARD! & the driver slams on the brakes, & my guy (oh how embarrassing) jumps up & yells, “RUN!” His hand is bleeding & has bits of glass in it, I’m wearing heels & trying to walk quickly, the driver is yelling bloody murder & saying he’s going to call the cops. So this ridiculous motley crew that is our group basically takes a bunch of crazy side alleys & we can hear the taxi driver yelling after us, but eventually we lost him. Phew.

My crazy date is trying to hold my hand but I’m so not into it because a) he is crazy & b) he is bleeding, so I talk to one of his more sane friends. We eventually get to a club in Chelsea which is packed out, & they are playing bad music. We dance, a bit, but I’m really just thinking about how I want to leave. Crazy boy has finally gone to wash his hand & I am not as leery of him as I was but I still think he is nuts & am totally not interested. He is flirting with me & telling me how hot I am & I’m laughing nervously, like, “Haha, yeeeeeah…” He kisses me & I say something like, “Hey, you’re cool but I’ve got to go”. I leave. He texts & calls me a lot. I never respond.

I saw him about a month later on an opposite subway platform, & hid behind a pillar. Awesome.

Okay, your turn! Bring on the most horrifyingly ridiculous encounters you’ve had! Astound us!