In Bed With Your Parents 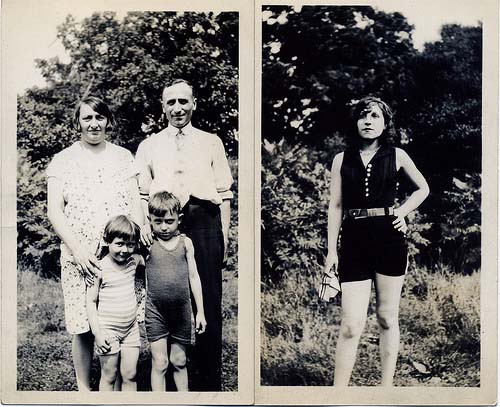 I was reading a book last night (Hot Relationships by Tracey Cox, if you must know!) & came across something really interesting. She had a whole chapter on what to do if you commonly fall into bad relationships. I have always known that these things tend to stem from a lack of self-esteem, but that was about the extent of my knowledge.

What she wrote really surprised me. At first I thought it was too clean a theory to actually have any basis in real life, but then I thought about the people I know & have been involved with, & I realised she was right.

Here’s a summary. (Unfortunately it is written with a heterosexual bias, so I don’t know how it applies to lesbian or gay relationships. Any ideas?)

Regardless of what you thought about the kind of relationship your parents had, you will subconsciously search to replicate it — or, if you’ve made a conscious decision that you don’t want to be like that, you’ll be looking for the complete opposite.

For women: Your father is the blueprint of all future men you’ll meet, meaning you will expect all men you come across to be similar to your father. It generally takes a while to realise that this isn’t necessarily the case. My father is successful & determined & hard-working & very loving — & so, to me, those are examples of “ultimate manhood”. If men don’t have those qualities, they don’t float my boat. If, however, your father is an alcoholic who let the family down, you will automatically expect the same of all men. Also, often what feels most natural to you in a relationship is an imitation of the way you used to be with your father — so if he was slightly dominating but loving, you’ll be drawn to that kind of man. If your father was always distant, you might find yourself replicating that over & over again with other men. Also, if your father was really good-looking, you’ll tend to go for really hot men, while if your dad wasn’t such a stunner, you’re more likely to be interested someone for their personality.

“If you had a doting father, you’re likely to reject men who don’t adore you. If your father wasn’t the hugging, affectionate kind, the message you got was: I’m not sexually attractive.”

For men: As above, it’s likely you’ll seek out the type of relationship you had with your mother. If your mother was a traditional, stay-at-home mother who doted on husband & kids alike, you may be on the search for a similarly old-fashioned gal who wants to take care of you. But if you think your mother could have done more with her life, you might really want a woman with a corporate job & a ballsy attitude. You’ll also learn from your father how to treat women — whether to bring flowers, for example, & how far it’ll get you if you do.

In terms of practical application, one helpful thing to do is think about your parents’ relationship. If you want the same kind of relationship they had, then that’s easy, you’re already going to automatically head in that direction. If you DON’T, you need to make a list of the things you didn’t like about it & keep it on hand. You will tend to subconsciously try to mimic what your parents had, because that’s familiar & comfortable to you. If you’re in a stable relationship with someone, you might want to show them your list. That way you can both keep an eye out to make sure what you have doesn’t devolve into your parents’ relationship.

Did either one of your parents have an affair? If, as a girl, your dad had an affair, you will have learnt not to trust men like him. If, as a girl, your mother was the one humping her way around the neighbourhood (for example), you might find yourself more prone to cheating than most other girls you know. If you’re a guy, your father cheating on your mother has sent a strong message — that this is how men treat women. Think about how that fits in with your personal ethics. You may need to actively fight against strong natural instincts to cheat.

Of course, just because your parents are huge influences, you need to let go of any blame or anger towards them for “making you this way”. They also had role-models which have affected them, & anger isn’t going to get you anywhere. Try to see their positive attributes. Your mother may have been a tyrant, but at least you learnt not to take any shit. See what I’m getting at?

Tomorrow I’m going to write a guide to getting out of a destructive relationship. Stay tuned!