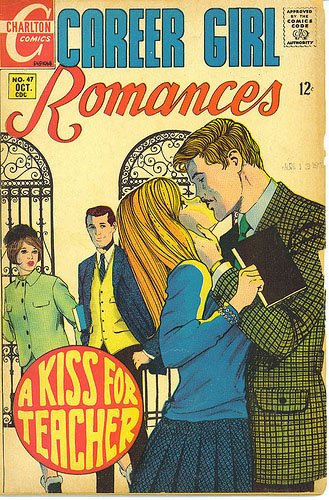 “I was wondering, for us younger readers, how is life after high school? Is college easier, harder, less, or more work? What about after that? Do your goals change? What about your personality? Are you able to go through a “self-discovery” period or do you just get thrown into life right away? As a young adult, what are your thoughts about all this? How was high school different for you?”

I can only tell you about my own experiences, but I’d be thrilled if my sweet nonpareils wanted to chip in & speak about how leaving high school was for them.

I went to a very prestigious all-girl Anglican school. While good times were had, mostly I loathed it & everyone in it. (Bear in mind, at the time, I was an angry gothlette!) Conforming was valued above all things, & while some of the teachers encouraged my unusual spirit, most of them seemed determined to crush it into the ground. It was very confusing for me, because my parents had always applauded my individuality, so I was constantly battling against the school while at the same time trying not to get myself expelled.

For example, when I was 15, I went on a school trip to Germany/France/Austria. I was in a “black clothes” phase — actually I was for most of my school years — & so before we left, the head of the form told me that I wouldn’t be allowed to go if I insisted on wearing “those witch clothes”. Yes. I had to BUY non-black clothing as a condition of going overseas. What a load. It makes me angry to this day! How ridiculous!

Anyway, you can understand my consternation. I really disliked this place. I had been at Anglican single-sex schools my entire life & I was totally over it. My parents aren’t religious; I think the schools I went to were chosen on their scholastic merits more than anything else, so it was really just coincidental pain. When I was in 6th Form, I decided that I didn’t want to do the last year of school (7th Form) at my school, I wanted to go to a public high school — which was mixed-sex & didn’t require a uniform. I thought this was the best decision of my life.

I went to see the dean & explained to her that I wanted to switch schools next year. She gave me a strange look & asked if I was intending on going to university. I said yes. She told me that she thought 7th Form would be extraneous & unnecessary, & that she thought I should go straight to university. I remember very clearly her telling me that she wouldn’t endorse the other girls in my form who wanted to go on to university early, because they weren’t as “socially able” as I was. Of course, I was flattered & since she was an adult & knew my abilities, I figured she was probably right. I took her advice & went to university the next year under something called provisional entrance.

I was really excited about starting university. I decided that I wanted to study criminal psychology (I had a thing for serial killers for a long time) as part of a Bachelor of Arts. I enrolled & chose classes, among them psychology, English & computer science. My English class was painfully dull & my computer science class was a joke — I was the best person there. I learned that in order to major in psychology, you had to take statistics. I started taking statistics. The class was at 9am & I found it hard to grasp maths at noon, let alone first thing in the morning. I started to feel like maybe I was out of my depth. Oh, did I mention that I had stopped studying maths two years previously?

My classes were incredibly boring & I didn’t know anyone. I started to feel resentful of going to these dull lectures when I had just finished 11 years of school. I just wanted a break! I didn’t feel like I really knew what I wanted to do with my life, & I was aware of how ridiculous it was to try & plot my future — as well as spending a lot of money doing so — at age 17. I stopped going to classes & dropped out.

I was still living at home & my parents weren’t going to have some girl lying around the house all day, so they told me I had to get a job.

My first job was at a bank, dealing with home loans & term deposits. I was on the phones & I had to wear a suit, even though no one could see me. This bothered me. I wore New Rock combat boots with my suit & called it even. My job sucked. Hard. I spent all the money I earned — & it was a very decent starter salary — on plane tickets to Auckland to see my new love interest. I called in sick a lot. After 6 months of this charade, I quit & moved to Auckland.

The next job was at a university bookshop, where I was the book buyer for all the fiction & non-fiction books. (Someone else bought stationery, & someone else again bought all the textbooks.) Again, I had to wear a uniform. The actual job was okay but my manager was a total nightmare. To this day, if I smell the perfume she used to wear, hairs stand up on the back of my neck. I quit.

Then I worked at an ISP, which was rubbish but the people were awesome, the dress code was totally lax & I got to play around on the internet all day. Awesome. I quit that job to go on a European holiday with my boyfriend. When I came back from that holiday, I worked selling advertising for a newspaper (over the phone). It was bad. We didn’t use computers. We used phone books. We had to cold-call all kinds of companies & sell them ads. God, it was terrible. I hated it & slacked off. They fired me & I cried about it on the phone to my boyfriend & he said he was glad because the job was making me miserable.

I did half a day at a coffee shop. I worked six months at a recruitment agency. I did lots & lots of temp jobs. Then, finally, miraculously, I got a job at Lush, which was amazing. I managed a shop for a year & a half & loved all of it, except for perhaps the last two months when my extremely unpleasant & manipulative colleague started to get the better of me. I did more temp work, worked for NZ Post & then I moved to Australia & started iCiNG. That about brings us up to date.

I basically spent 5 years bouncing around, doing various jobs & working out what I liked & what I disliked. Also, somewhere in that time, I did a bunch of freelance writing work, & a Diploma in Publishing by correspondence, which covered copy-editing, print layout, etc. I loved it & it was exactly what I wanted to learn.

To answer your questions…

College/university is, indeed, hard work. If you really love what you’re doing, it probably isn’t so bad, but there is a reason why so many people change majors & entire degrees so often. I had never had to work hard at school & I realised, quickly, that university is very different. It is a rude awakening & I think a lot of people sink or swim. Of course, liking what you’re studying will help decide whether you succeed or falter.

Going to work can, unfortunately, be a bleak, soul-crushing experience, & the hardest thing is maintaining your spirit throughout that. Get as much experience as you can, work out what you like & then do that. Don’t feel like you have to stay in any one job. Make a list of the attributes of your job that you like & make a conscious effort to go for those things in the future. Don’t get a job on the phones if it makes you want to top yourself. You have other options, always.

Your goals change a lot & your personality does too. I am completely different person now to who I was when I left school (& thankful for it)! But these things will change at unusual times. Maybe you’ll have a lover who encourages you. Or maybe you’ll have a lover who hates his or her job & will teach you that a grinding existence is the only way. There’s no knowing what will happen to you when you leave school, & that’s part of the fun of it. It took me a few years to work out that I wanted to have my own magazine, & even then, it has warped into this online beastie! Not exactly what I was imagining, but I am really happy with how it has turned out.

While it sounds good to go through a “self-discovery period” as you sit alone in a field somewhere, that’s not really how life is. If you leave school & go straight to university, you have no time to chill out & be yourself — you will be running from class to class & kissing professor’s asses & handing in rushed essays. You will learn more about yourself from travelling or living by yourself than you will from going to university, in my opinion.

Another thing I feel very strongly about is that we should all be aware of the social pressures to push kids straight from school into tertiary education. It’s a fantastic business model — after all, universities exist to make money — but it doesn’t have the best interests of the students at heart. Universities benefit from having young students who don’t know what they’re doing. They fail lots of classes because of lack of passion or interest, they change degrees, they do an extra year or two — & it all amounts to ka-ching for them.

Unless you know what you want to do — & you’re really sure about it — don’t go to university straight away. Take a couple of years off. Work somewhere. Go travelling. Have adventures. Write a novel. Cook a meal for your friends every night. Work out what you like doing & what you have no interest in: things which are hard to work out when you’re at school & people are constantly pushing & pulling you in various directions. There is more to life than academia. Much more. Go climb a mountain in Nepal & then get back to me.

It breaks my heart to see talented people at university who hate it. One of my beautiful friends is an incredible, mind-blowing artist at university, & for some reason she has this idea that she needs a degree to be successful. What?! She’s an ARTIST! How will having a degree help her draw better? Just go out there & do what you do! Do it with passion & fervour & determination & there is no way you cannot do well!

A lot of the girls I went to school with have just graduated university & are now looking for the first jobs. I wouldn’t trade that for all the money in the world. I am so happy & blessed to have had my experiences & to now own my own business at 24. I would never have done this if I had been at university all this time.

Why You Need A Degree To Work For BigCo