Lions & Tigers & Bears… Oh My! Up Close & Personal At The Wellington Zoo! 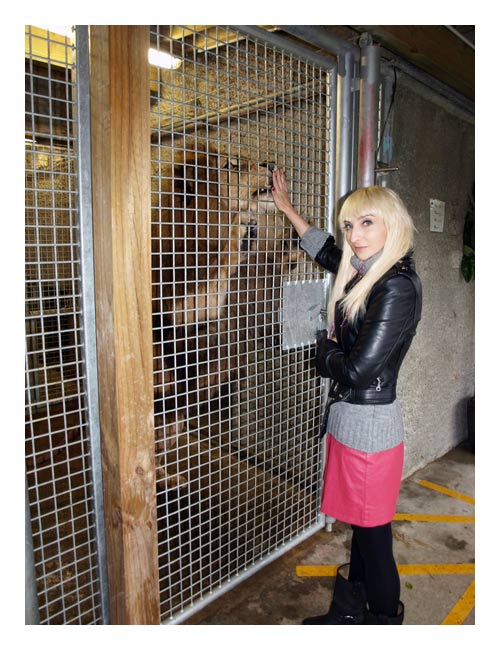 There are a few things I thought I’d never do in this lifetime, which I’ve been delighted to have been proven wrong about! I was always sure, for example, that I’d never get married… How remarkably inaccurate that turned out to be!

Another one of those things? I never thought I’d feed a lion or befriend a giraffe! In fact, I never thought I’d get any closer to either of those animals than seeing them on the television. Lucky for me, this belief was upended during an Animal Encounter at Wellington Zoo!

Despite living in Wellington for 18 years & being a pretty major animal lover, I’d only been to Wellington Zoo a handful of times. I suppose it’s a bit of a case of “out of sight, out of mind” — Wellington Zoo is tucked up in the back of Newtown, a place I didn’t go very often. Be that as it may, I still had very fond (if a little distant!) memories of visiting the zoo with my family & on school trips.

So you can imagine my excitement when Kate from Wellington Zoo sent me an email, saying she’d heard I was in town, & did I want to have an Animal Encounter while I was here?

She didn’t have to ask me twice! I wrote back immediately, saying something really subtle, like, “YES! YES! YES!”

You can take your pick of adventures. On the Cheetah Experience, you get to “find out what a cheetah smells like, how their fur feels & what they sound like when they purr.” The Red Panda Close Encounter is one of their most popular: the pandas will run up to you & climb on you as you feed them! During the Giraffe Close Encounter, you hand-feed them carrots & apple slices, & get to feel their fur. The Big Cat Experience involves getting up close & personal with the lions. I wasn’t sure which I really wanted to do, since they all sounded amazing, but it ended up being decided for me. The red pandas were all booked up, & the baby cheetahs had cat flu (!!!), so on a Saturday afternoon, my parents & I headed up to Wellington Zoo to feed the lions & giraffes! 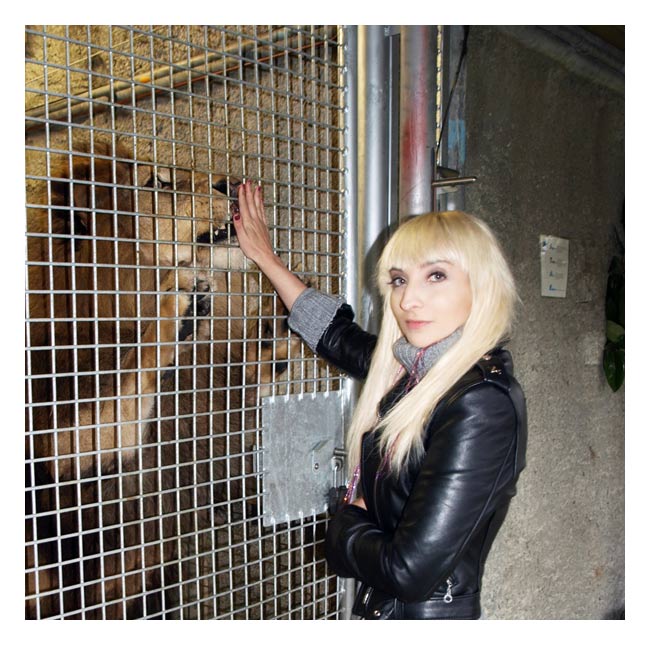 Seeing a lion face-to-face doesn’t seem like a huge deal until you actually DO it. In fact, the fear started to hit us as we walked up the hill towards the enclosure. We could hear them roaring & growling at one another… It was the most ungodly noise, unlike anything I’d ever heard. They sounded like beasts from hell. My father & I looked at one another & made a face like this…

The terror was palpable!

We were led — literally — into the lion’s den by a zookeeper who specialises in training & caring for these immense, incredible animals. Meeting the lions was an amazing experience. Unless you have been within claw-swiping distance (eek!), it’s hard to really get a fix on how very LARGE they are. The zookeeper told us that the lionesses weighed about 130kg (286lb), & the lions were about 190kg (418lb). Huge!

It was also astonishing how much like normal house cats they were. That might seem a bit dim to say, because obviously, they are cats, but the lionesses were all rubbing up against the walls, clawing at the (oversized) cat-flap, & smooshing their heads together. But of course, when you look at them, their faces are ENORMOUS, with these fantastic yellow eyes. It was so great!

The first thing the zookeeper did was demonstrate how the lions had been trained. He was using a clicker (just like you use for dog training) for positive reinforcement, & he had them stand up on their hind legs & put their front paws against the wire of the cage, as well as open their mouths really wide. He explained that the reason they train them to do this is so they can give them a medical examination without really having to get inside the cage. The lions have essentially been trained to present various parts of themselves to the trainers & vets, which is brilliant!

He led one of the lionesses into a “crush”, which is a slightly brutal word for cage that can adjusted in size. He had her lie down & he gave her some little pieces of meat, while I slid a (very blunt) hook underneath her tail & pulled it outside of the cage so I could feel it! It was pretty shocking just how strong her tail was… & that’s just her tail!

The next bit was the most terrifying & wonderful. The zookeeper grabbed a big bucket of meat & showed us how to feed the lions. You put your hand into the bucket & grabbed a slab of cold meat (ewwwwwwwwww), then held it in your open palm & pressed it against the wire of the cage. The lion then stands up on its back legs, puts it paws against the cage & LICKS the piece of meat out of your hand. It was quite crazy, because the chunks of meat were bigger than would easily fit through the wire, but their tongues are so rough & prickly that they kind of hook into the meat, & that’s how they pull it through! Also, they have big, scary teeth. Also… their tongues are really hot. I couldn’t believe a LION WAS LICKING MY HAND! Are you kidding?! Oh my god!!! 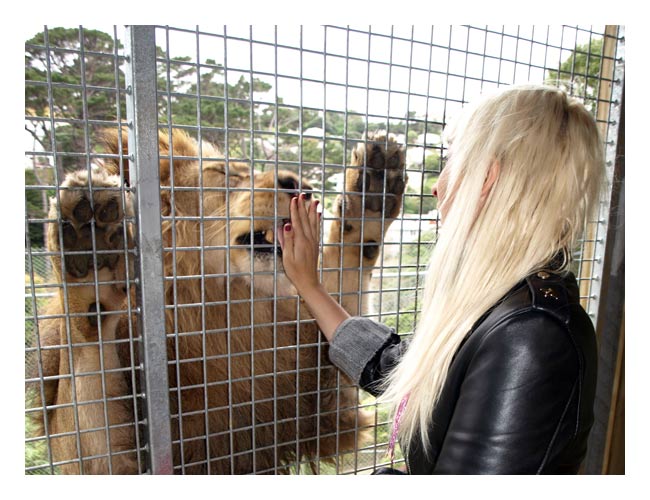 Look how happy he is!

Later that day, I befriended a giraffe!

I didn’t really know what to expect from the giraffe encounter. Lions are pretty clean-cut: they are big & dangerous, they could eat you, you know that they’re in charge & your experience is going to be kind of scary. But giraffes? Well, I didn’t know what to think.

GIRAFFES ARE AWESOME! Just like with lions, you don’t realise how big they are until you’re standing next to one, & your head doesn’t even clear the top of its leg! They are soooooo weird looking. For some reason, it felt like I was hanging out with a dinosaur. Their necks are so long, & their heads, with these enormous eyes & super-long eyelashes, dip down towards you so they can eat. Wow. It was fantastic. 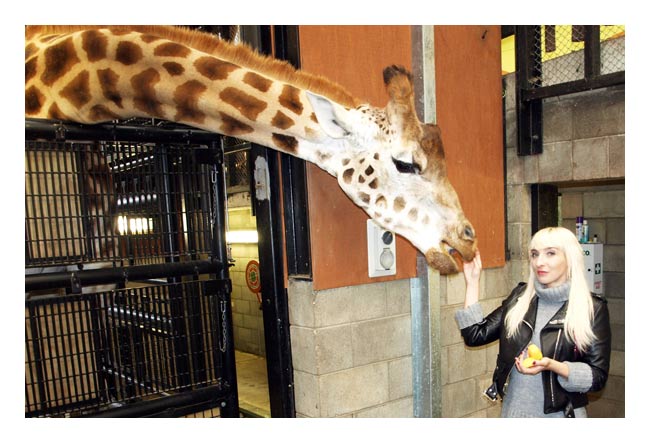 …& they’re so cheeky & funny & gentle! I stood on the ground holding carrots & apple slices, & once they spotted the food in my hands, their loooooong necks would swoop & their heads down bow down towards you. They have THE LONGEST TONGUES — they are 40 centimetres long (15 inches!), & they are BLUE!

They actually wrap their tongues AROUND whatever you hand them; very Gene Simmons! I discovered that the reason their tongues are blue is to prevent sunburn! They spend so much time eating & sticking their tongues out that they’d get burnt if they were just a reddish-pink colour like ours. Isn’t that incredible?! 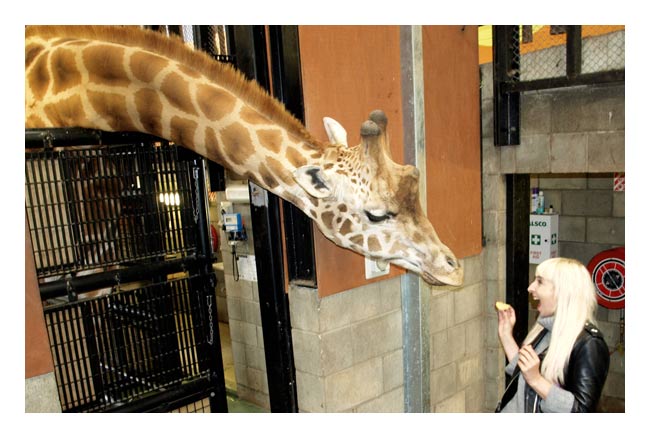 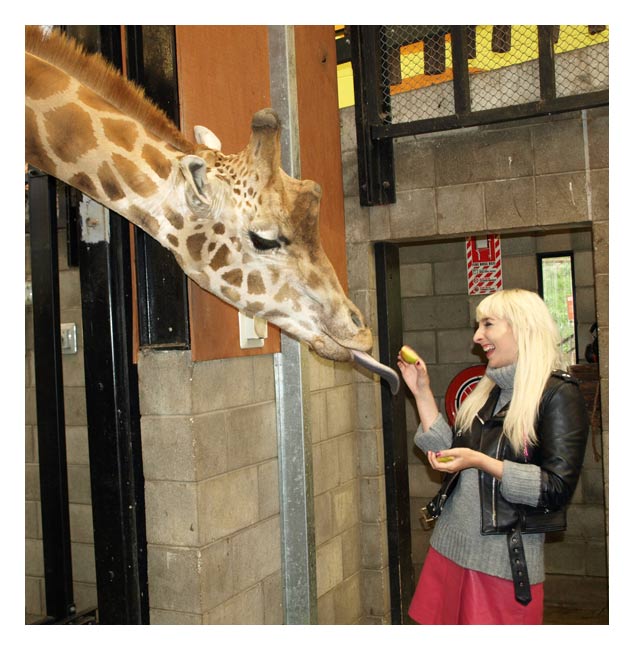 The two giraffes I met had the absolute best personalities. They were so lovely! Awwwww! I really didn’t expect them to be so sweet & funny… Everyone should get up close & personal to one of these magnificent creatures. I promise you’ll fall in love just like I did!

We had such a great time at the Wellington Zoo!

It’s a really fun place to visit, & not just for the animals! Their cafe is brilliant, which was such a surprise. We had this incredible kumara & carrot soup, & they also serve Mojo coffee (which, if you ask me, is the best EVER). Even better than that, one of the glass walls of the cafe has a pygmy marmoset enclosure on the other side, so you can watch these teeny-weeny monkeys run about while you enjoy your lunch! What a genius idea!

We were really impressed by everything about the zoo. I have to say a huge THANK YOU to Kate Baker for making it all happen, & to the zookeepers who clearly love the animals so much, & work really hard to make them happy & keep them healthy… …I couldn’t miss showing you these photos of the gorgeous sun bears & pygmy marmosets! BLESS!

« Win A Trip To Barcelona… With Me!
The Radical Self Love Manifesto! »