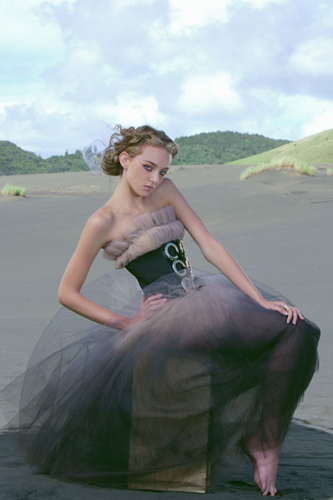 Are any of you watching New Zealand’s Next Top Model? It is totally fascinating, I am obsessed.

I made an American friend of mine watch an episode & when Teryl-Leigh started talking, we spoke at the same time. Him: “Can you translate that for me?” Me: “I have no idea what she just said.” New Zealand accent ahoy!

Where would you put your money? I think the final 2 will be Christobelle & Laura, but I also really like Rebecca Rose & Victoria’s looks.

It’s funny because so many of the girls look like people I know — they have really New Zealand faces. Ruby looks like a girl I used to catch the school bus with, Christobelle reminds me of a girl I used to work with, & I am convinced I’ve actually met Laura & Victoria before.

I’m really surprised by the fact that the contestants are all so white — with the exception of Ajoh. Where are the Maori girls at?! So many Maori girls are jaw-droppingly beautiful. There was some mention made of Ruby having some Maori heritage but, well, you wouldn’t know it to look at her. There are no Asian or Pacific Island girls either, which is really weird, because it’s not like they don’t exist!

So, what do you think? Embarrassing? Culturally insightful? A hideous train-wreck or good quality television? Oh… & Australia’s Next Top Model starts up again soon (April 28th)! The girls on there are hilarious — in personality & demeanour! It’s definitely the most dramatic regional variety of the Top Model franchise, though having said that, it did actually produce a real model: Alice Burdeu.

Behind the scenes at NZ’s Next Top Model