Got One Day In NYC? Here’s A To Do List! 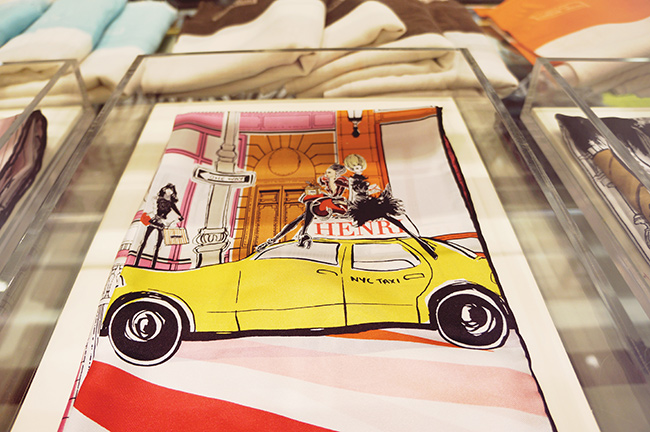 When Shauna told me she only had one day in New York City before flying back to Portland, we decided to play tourist. Instead of loitering around our old familiar haunts downtown, we headed uptown to do things a little differently.

It was great, because when I get emails from international playgirls en route to NYC, they often ask, “If you only had one day in New York, what would you do?” The answer isn’t easy, because there is simply so much to do here. What I would suggest is to pick an area, and explore it. That’s exactly what we did.

In addition to hitting up some of my old favourites, Shauna and I also discovered plenty of untapped treasures. We had a great day — and you can see the video of our experiences below. Underneath that, I’ve written a list of the places we went, and why. Bookmark this baby for future reference! 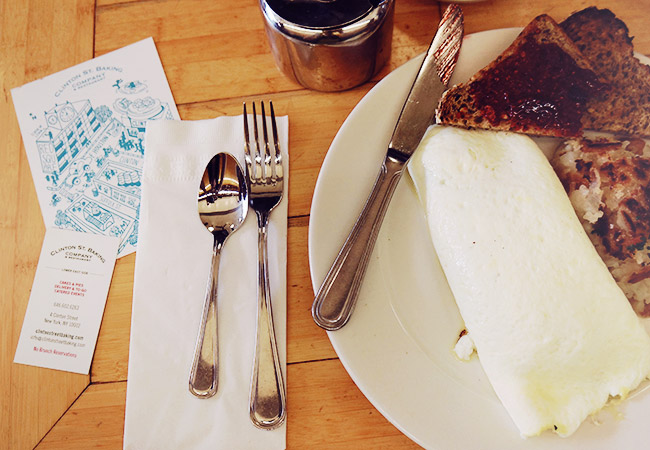 Clinton Street Baking Company 4 Clinton Street
We started in the Lower East Side, halfway between where the two of us were staying. Clinton Street Baking Company is famous in NYC for its extravagant brunch, and, so it follows, its wait times. It’s not uncommon to stand outside for over two hours on a Sunday, which is exactly why we didn’t go on a Sunday! Who has time for that? Shauna and I showed up on a Tuesday morning, which is a damn good time to go. We only waited about 10 minutes before being beckoned inside for two big plates of delicious brunch. I recommend the Southern Breakfast: two eggs, sugar-cured bacon (YUM), cheese grits, and fried green tomatoes. Mmmmmmm yes. 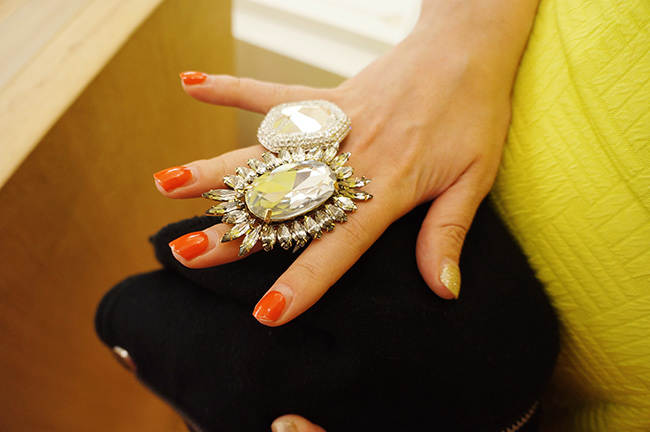 Henri Bendel 712 Fifth Avenue
With our bellies full — and a head full of anticipation — we took a cab all the way up to Bendel’s, a wonderful department store geared towards young women with money to burn. You expect to see Blair Waldorf around every corner. With a delightful selection of jewellery, beautifully-designed candles, bizarre hats and hair accessories up the wazoo, we wanted to take home half the store. Also, hidden upstairs is an outpost of Rent The Runway, where you can try on dresses from their extravagant collection before renting them for an event. 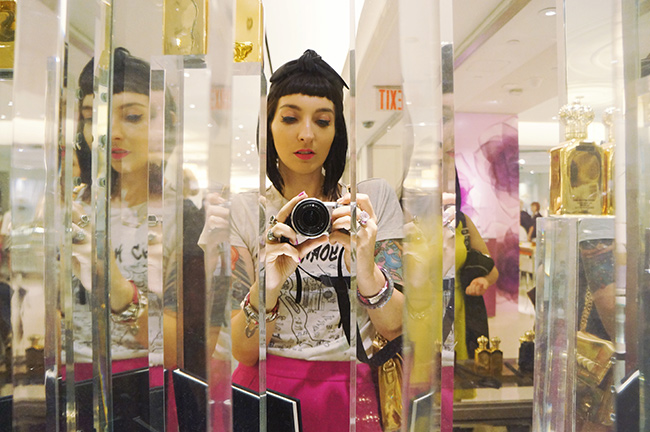 Bergdorf Goodman 754 5th Avenue
I have always maintained that Bergdorf’s has the best shoe floor in the city. Sure, Saks is enormous, but the service at Bergdorf’s makes all the difference. No matter how weird or wacky you might be, they never treat you with anything less than the utmost respect. My first shoe purchase there was a pair of Alexander McQueen heels, and I had purple hair and looked utterly unlike anyone else in there. The sales assistant laughed and joked with me the whole time, and I never forgot it. This time, we made sure to visit the beauty department, where we learned about the most expensive perfume in the world. A woman there dabbed some on Shauna’s wrist and then waved a fan over her arm to dry it off! I mean, what an experience! 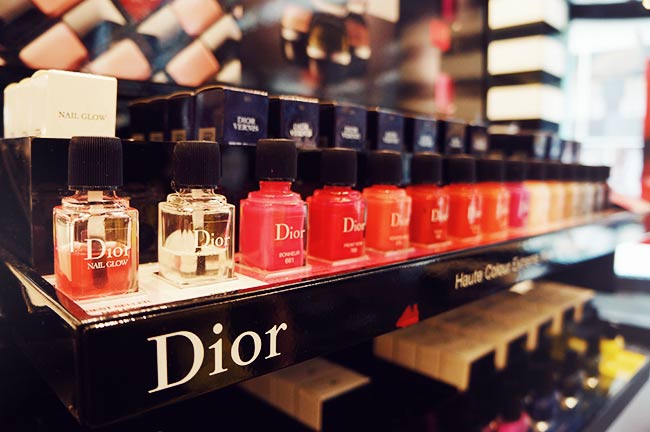 Sephora 597 5th Avenue
If you ask me, no day out is complete without a stop in Sephora. You Americans are so spoiled: Sephora is the most sublime place ever. For anyone who lives outside of the USA, I promise your jaw will drop at the extensive — and wonderfully organised — selection of beauty products. 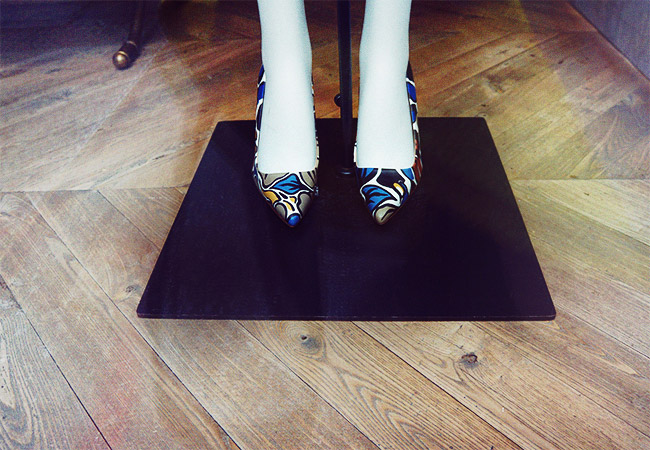 J. Crew Collection 1035 Madison Avenue
After slathering our bodies with oil at Sephora, it was time for a walk up Madison Avenue. If you’re ever feeling flush, a quick wander along Madison Ave will bring you back to earth! This street reeks of cash, and is populated by fascinating women with the same face, carrying little dogs. It is like being on another planet. Okay, I’m getting distracted! J. Crew Collection is where they keep all the expensive stuff. We pawed a perfectly-designed navy blue leather motorcycle jacket here until it started to become uncomfortable… Then we made our escape! 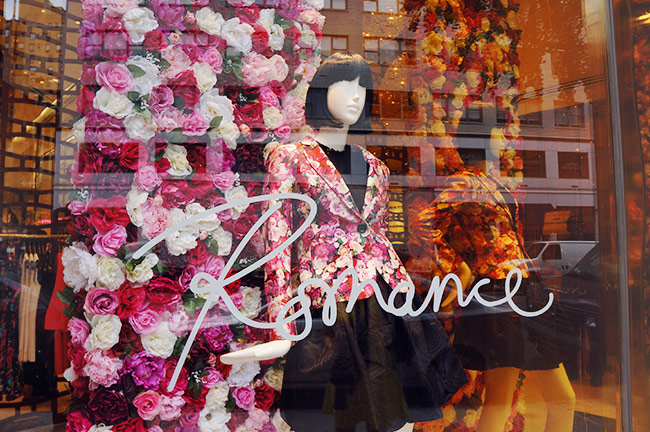 Kate Spade 789 Madison Avenue
The store at 789 Madison is the Kate Spade flagship, and it’s glorious. A four-storey townhouse, each level is unique, and the entire space sings the Kate Spade song. From fantastical window displays to glowing neon signage (like “Uptown Is The New Downtown”), it’s a veritable pu-pu platter of hot pink leather, glittery shoes, and all the other things that make us go, “Ooooooh.” 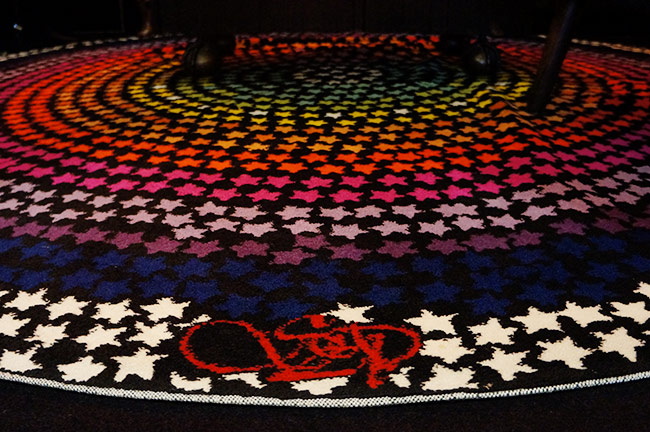 Solange Azagury-Partridge 809 Madison Avenue
I happened upon Solange Azagury-Partridge’s store with my mother years ago, and I was immediately all a-swoon. You know you’re somewhere special straight away: the wallpaper gleams with Swarovski crystals, the rainbow carpet bears her own insignia, and the jewels are spotlit on black velvet. Simply put, Solange’s jewels motivate me to work really, really hard! 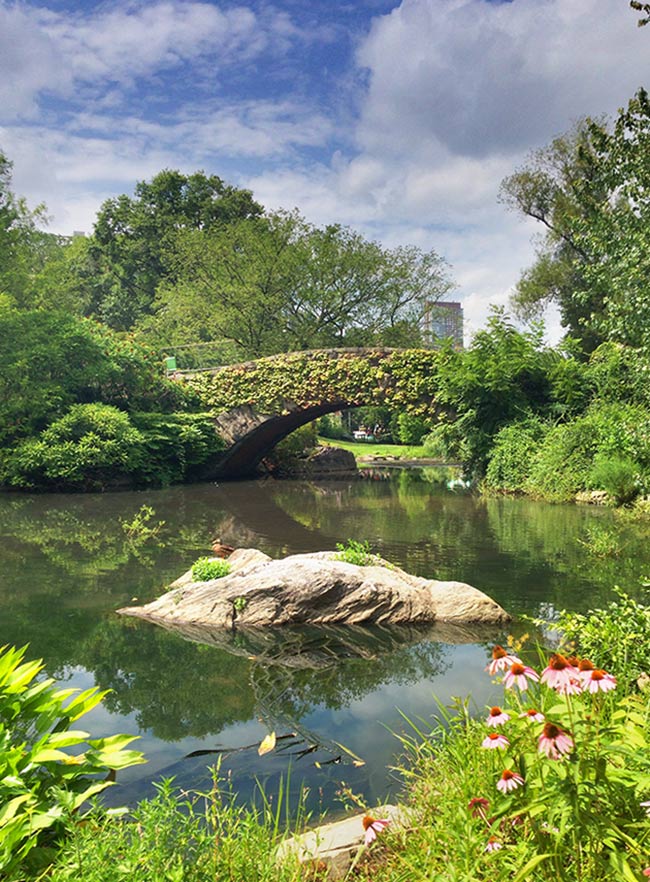 Central Park 14 East 60th Street
There is just so much to see and do in Central Park, and I haven’t even come close to exploring all of its splendour. (In fact, one of the things I’m definitely going to do before the summer is out is take a formal tour of Central Park. I can’t wait!) Shauna and I wandered down random paths, took in the views beside this little pond, and kept going on and on, asking, “How is this New York City?!” 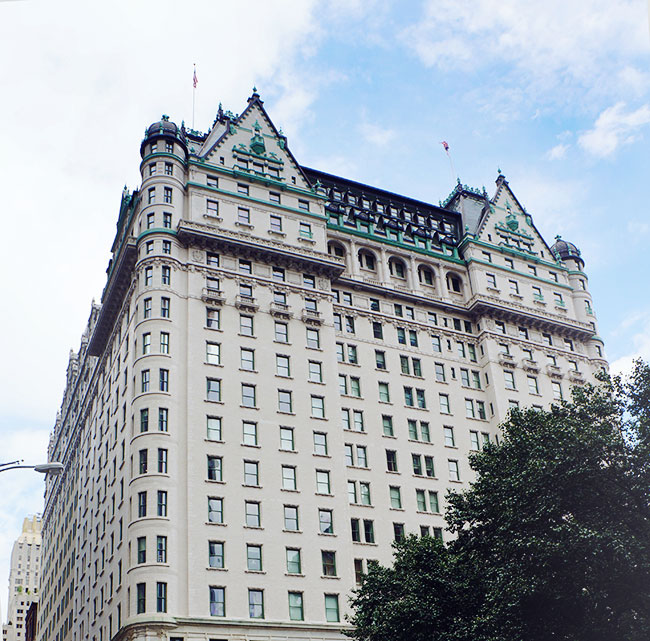 The Plaza Food Hall Fifth Avenue at Central Park South
The Plaza Hotel is famous, expensive, and odd. The people working in the lobby seem distant and mostly annoyed by the amount of foot traffic, which makes for — let’s face it — a not overwhelmingly warm welcome. However! Make your way down its hallowed halls, take the escalator down, and you’ll discover a food hall! Not just any food hall: an amazing food hall. We got salad, soup and juice at Tartine, but there’s also caviar, cupcakes, and lobster rolls. Seriously, it has everything. Just GO. 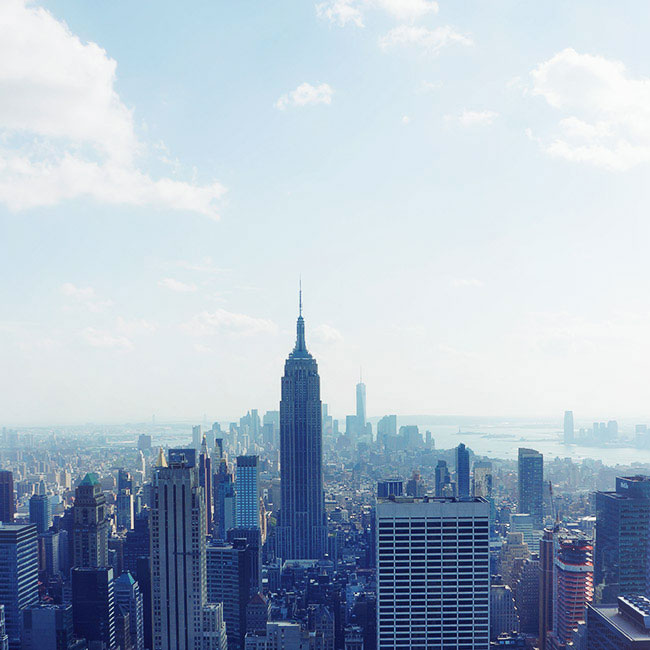 Top of the Rock 30 Rockefeller Plaza
Usually, I hate doing anything geared towards tourists, even if I’m in a foreign city. Call me jaded, call me cynical, but in my experience, anything with a hefty ticket price and a line of people out the door does not appeal. I don’t know what came over me, but when Shauna and I looked up at the Rockefeller Center, I exclaimed, “Let’s go up to the top!” Full disclaimer: it was expensive ($29 each). But it was beautiful, and worth it. What a view!

Big Gay Ice Cream 125 East 7th Street
After surveying the city from a great height, we headed back downtown to walk Hank and Dolly, and take a breather before heading out for the night. Our first stop was Big Gay Ice Cream, my favourite ice-cream shop in the whole city. The store is emblazoned with rainbows and unicorns. You just have to go there, okay? My favourite thing to order is a Monday Sundae, no whipped cream, with chocolate dip. It’s off the hook. I also recommend the Salty Pimp. So good you’ll wanna slap someone. 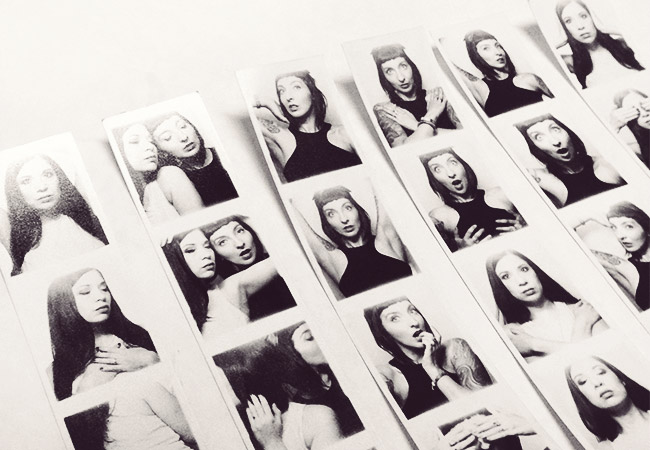 The Smith 55 Third Avenue
Luckily, Shauna is just as obsessed with photobooths as I am, and the best booth in the city is in the East Village, at The Smith. They have great food, but we were running low on time, so we simply walked past all the people noshing, and down the stairs. The booth takes cards (danger, danger!), and is only $3 a strip. What better way to commemorate your time in NYC? 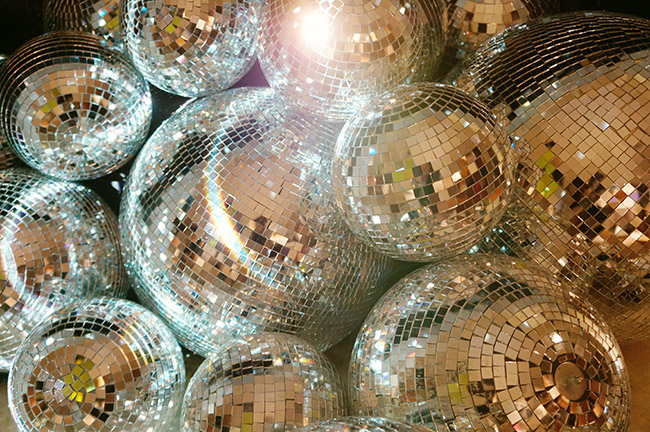 Academy Mansion 2 East 63rd Street
We grabbed a cab and headed back uptown again for a party held by Ted Baker. In this opulent mansion built in 1921, we heard a live band, watched flappers dance, and were dazzled by disco balls stacked up in the fireplace… And everywhere else. Gorgeous. 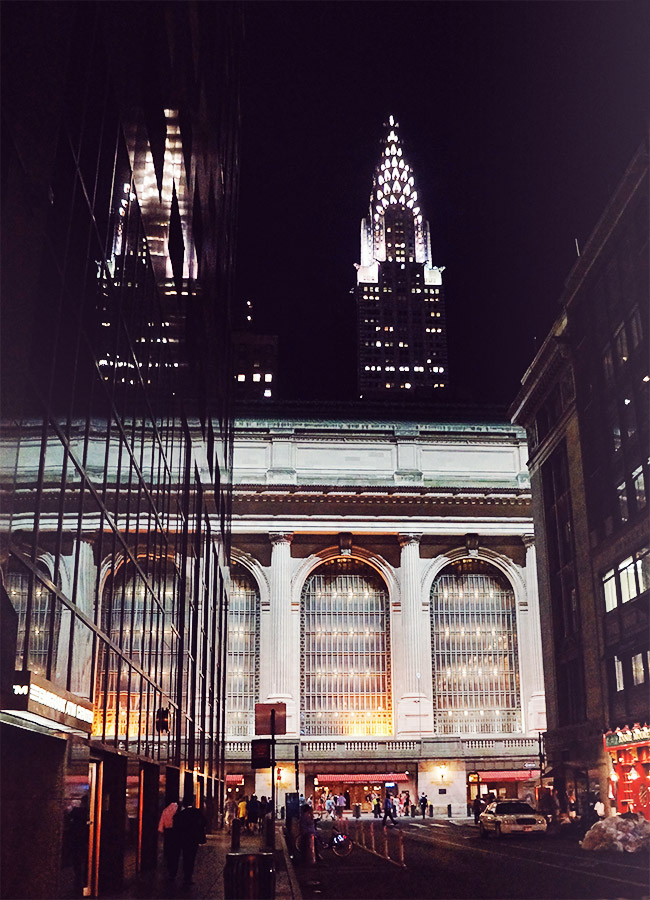 Grand Central 89 E. 42nd Street
It was only 9pm, but we weren’t ready to call it a night, so we started to walk downtown. Walking around the city at nighttime is one of my favourite activities: once the stores have closed, Manhattan takes on an entirely different vibe. We strolled 20 blocks, laughing and talking passionately the whole way… And then we decided to go into Grand Central station. It’s just as grand as the name suggests, and the ceiling is painted with constellations. 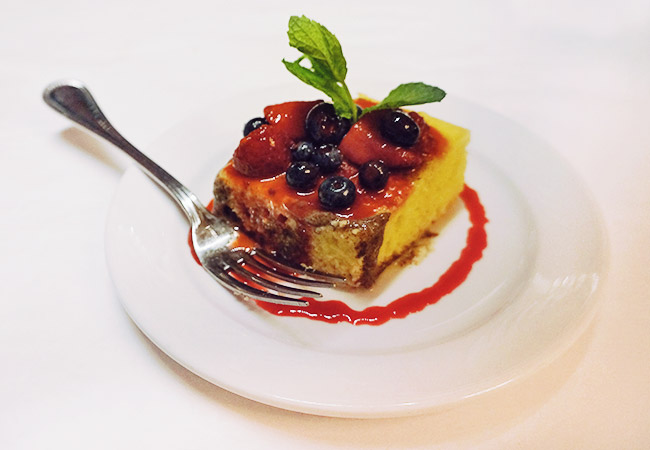 Michael Jordan’s Steakhouse 23 Vanderbilt Avenue
Even better, inside Grand Central are a selection of restaurants. We were starving by this point, and so we made the slightly unusual decision to get a table at Michael Jordan’s Steakhouse. It had been such a long day that we were endlessly cackling, while asking each other questions like, “Do you think Michael Jordan baked these bread rolls himself?” It was actually a pretty good meal, and we enjoyed it, before walking outside, and taking a cab home.

I hope this gives you some inspiration for your next visit to NYC! And hey: maybe we’ll bump into each other! One can only hope.

« Getting Excited For Fall… With The Help Of A Few Lovely Things!
Vancouver, Calgary, London, Berlin, Amsterdam… What A Whirlwind! »