Now, before you go thinking that this is just a re-hash of an old article — Flattering Photographs — let me tell you that it’s not! Flattering Photographs is all about how to take a good photograph of yourself. The sort of thing that one requires for the multitude of social networking sites we all belong to these days. Myspace, Livejournal, Facebook, Consumating, Twitter, Last.fm… it just goes on & on & on, & you need a swell profile picture (or pictures) for all of them.

But what about those times when you’re at an event & a photographer approaches you, asking to take your photograph for x magazine? It is a time of panic for many of us. You can’t exactly grab the camera, hold it several centimetres above you & say, “Lemme show you how it’s done, bucko”. While this would probably give you points for audacity, it would leave a pretty unpleasant taste in most people’s mouths.

Of course, the secret reason for this article is that I had my photograph taken at the Curvy 2007 book launch & the pictures were fine, but I am annoyed at myself for not really nailing it. There are several things I would have done differently, & they’re included below.

Here’s how to make the most of a paparazzi moment.

Work out your best angle. Most photographers will take photos at eye-level, meaning you’re going to get a straight-on kind of shot. (If they try to take it from below, either tell them to take it higher up or not to bother — no one looks good from that angle.) Don’t just look straight at the camera. You’ll end up with a mugshot, & even Frank Sinatra couldn’t make that look good. This may mean a bit of bedroom practicing. How much do you need to twist your neck to make the most of those lovely cheekbones?

Lift your head slightly. Not too much, since it makes the photograph very “chinny”, if you know what I mean. There’s also the risk of a picture which looks more like “A Thorough Investigation Of Jane’s Nasal Cavity” than “Jane Brouhaha & friend”. The point of lifting your head is to elongate the neck & improve your posture. It also helps avoid the whole double-chin scenario.

Yes, posture. Stand up straight! Curved shoulders & a generally troll-like disposition are very unattractive. You should be standing up straight all the time, but I know it can be hard to remember, especially if it wasn’t drilled into you early. Imagine there is a string coming up from the top of your head which is attached to a cloud way up above your body. Then act accordingly.

Put down anything you’re holding. Take off bags, put down cellphones/drinks/chihuahuas, & if a coat is slung over your arm, give it to someone else to hold for the time being. The reason for this is that all these accoutrements are a distraction from what should be a glorious photograph of YOU! Not Skyy vodka or Nokia or Tinkerbell. The other thing to keep in mind is that when you looked in the mirror before leaving the house, you didn’t have any of this junk. It was just you in a daringly stylish outfit. You want to preserve that as an image if you can. Bags throw us off balance, make us lopsided, pull on necklines &, in a really bad photograph, add weird black unidentifiable blobs to our stomachs or chests. 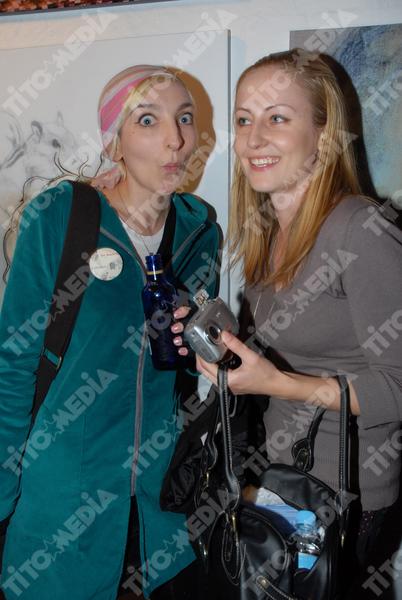 The photo that launched an article.You will notice my friend Ren, she is adorable, yes?

Have a schtick. Seriously. My schtick used to be a shocked face a few years ago. When faced with a photographer on Thursday night, I went with my old schtick. Nice in theory, except my face has changed since then & now it makes me look like Skeletor, as you can see in the photograph above. Hot! Except not really. For this reason, I suggest coming up with something which works & then regularly CHECK that it still looks okay, before randomly terrifying photographers & guests alike.

If you don’t have a schtick, or you think the idea is lame… be off with you! No, not really. Aw, gimme a hug. If you don’t want to pull a face, just smile! I know it sounds simple, & it is. But it works. Of course, make sure you’re doing the right smile. Some people have gnarly teeth which make even the tenderest grin look painful, while sometimes the closed-lip smile conjures up images of a mouth full of cotton wool, or a nervous, frigid woman. (EVEN if you are a man!) So get your smile right in the mirror before hitting the red carpet.

Hold your arms slightly away from your body. This will make you look much smaller, believe me. Put your hands on your hips for best effect.

Be confident! Even if the photograph kind of sucks, at least if you’re smiling or look like you’re having a good time, you’ll be much happier with the end result.

Good luck to you!