Puppy Love & Bunny Hops: 10 Reasons Why You Should Adopt A Rescue Animal 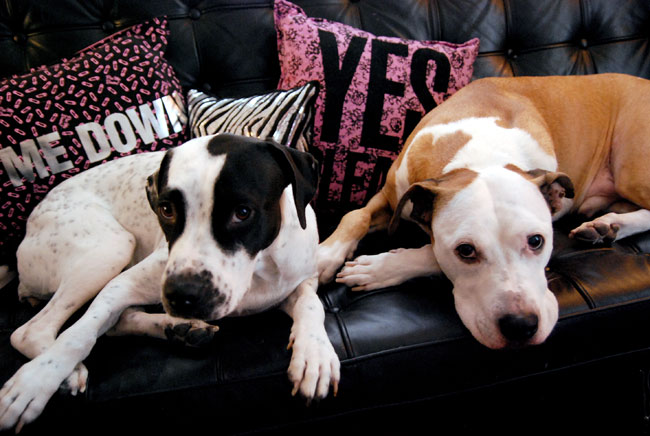 Sometimes I’m overwhelmed by the amount of happiness that our dogs, Hank Williams & Dolly Darling, bring to our lives. You can read about how they made their way to us here: Happy Birthday Hank Williams! & Introducing Dolly Darling!

If you’ve been idly considering adopting a new member of the family, I’m here to try to push you over the edge & make it happen! But more than that, I’d like to encourage you to choose a rescue animal. Below are 10 reasons why I think you should adopt a little rascal from an animal shelter!

If you don’t know anything about puppy mills, have a read. They are essentially breeders who will endanger dogs in the pursuit of making a buck. Some of them are almost ethical, while some are horrendous — & it’s almost impossible to know where the dogs in your local pet store came from. Pet stores will often tell you their dogs came from a breeder in the area, & the one way of being sure is asking to look at the paperwork. (Most people don’t know to do this.)

The dogs in puppy mills are treated atrociously. The mothers are forced to breed through every heat cycle until their body physically cannot support it any more, & then they’re either killed or sold to a laboratory. They are “de-barked” by using absolutely disgusting, brutal methods. These dogs often have extremely serious illnesses or psychological problems (as you would, if you were stuck in a filthy cage all the time), & they often die young or create major problems for the families they’re adopted into. The whole thing is revolting from start to finish.

The most effective way to shut down the puppy mill industry is to stop buying their dogs! It’s an excellent reason to pick up a pup from another source.

9. An adult cat or dog can often be a much more sane option than getting a puppy or kitten!

As adorable as a kitten or a puppy can be, they are a LOT of work! If you have no experience housebreaking a dog or socialising animals, you might find yourself in for a world of pain!

My parents & I got a puppy when I was about 7 years old, & we had no idea how to train her. She peed in the house about once a week until the end of her life — she was 13 when she passed. We loved her regardless of our lack of education on training a dog, but that’s a LOT of pee!

While most shelters have young animals available if you want them, if you want a more seamless integration of your new pet with your family & lifestyle, think about adopting an adult! They have often already been trained, socialised & this can save you a lot of trauma, heartache & carpet replacement!

Pet therapy exists for a reason! When patients with dementia spend time with animals, they become less agitated & more interested in social interaction. Patients with AIDS find that animal therapy helps combat feelings of loneliness & depression, & increases happiness. Pets control blood pressure better than drugs (!!!), they encourage you to go out & get exercise, & they reduce stress. Just spending a few minutes petting an animal will reduce your blood pressure. Additionally, having a dog will require you to have a routine, which in turn makes you feel needed & gives you a stronger sense of self-esteem!

For anyone who doubts these facts, you only need to take a quick look at this article on the physical & medical health benefits of owning pets!

7. The idea that rescue animals are somehow “damaged” is simply not true.

Yes, some animals that have been in shelters have been abused or were given away because they had behavioural problems that their owner simply couldn’t handle. But not all! With the economy the way it is, many animals are put up for adoption because their owners can’t afford to keep them any more. Having an animal can be expensive, & if you’re in a position where you have to choose between feeding your child or looking after an animal, most people will choose their children.

The fact of the matter is that the most responsible shelters won’t adopt out animals which have severe behavioural problems, or who are aggressive, but you do have to do your due diligence. Spend some time with your prospective pet, & get to know it a little bit before deciding to take it home. (The best shelters won’t let you take an animal on the first visit, anyway.) Take it for a walk, play with it, & see whether you’re compatible.

There are a few questions you can ask, though, which will help work out if this pet is right for you:

What are the origins of the animal? Was it turned in by its owner, was it a stray or did it come from another shelter? How long has it been in the shelter? The more information you can get about your pet, the better.

How old is the animal? This will help you determine whether it will get much bigger, whether it is still in its “naughty” young stage or if it’s old & grumpy!

Does the animal have any medical or behavioural problems? Has it been trained? Has it been spayed or neutered? Is it up to date with its vaccines?

Are you able to bring the pet back if it’s not a match with you & your life?

Consider whether the animal will fit in with your family. How much exercise does it need? Will it get along with your children or existing pets?

6. Adopting a rescue animal is a beautiful lesson in compassion.

Gandhi said, “The greatness of a nation & its moral progress can be judged by the way its animals are treated.”

When you welcome an abandoned cat or dog into your family, you are leading by example & teaching everyone around you a valuable lesson.

The only way to teach compassion is by showing & demonstrating it. If you have children, one of the best things you can teach them is how to take care of something which needs their love & assistance.

Through doing this they’re able to learn empathy — that invaluable skill of being able to understand another’s feelings, sensing when they are uncomfortable & being able to adjust your own behaviour to make things more pleasant for them. The idea, of course, is that they take these lessons they’ve learned from having a pet & extend them out to all their future relationships & interactions!

You know the amazing thing? This theory actually works.

5. It’s not just compassionate — it’s actually good for your children.

“Researchers at the University of Leicester found that children between birth and age six years in pet-owning families will have better social skills, better speech, better co-ordination, more confidence and will be less likely to suffer from allergies.” (Source)

4. If you want a purebred dog, don’t despair!

You don’t have to go to a breeder & fork over mega-bucks if you have your heart set on a purebred dog, because between 20-30% of dogs in shelters are purebreeds!

While the majority of dogs are mixed breed, purebred dogs are just as prone to being put up for adoption as any other. If you run out of money, or you no longer have the ability to care for your dog (for whatever reason), it doesn’t matter whether it’s a poodle or a mutt. Circumstances are circumstances!

It’s extremely sad that people feel the need to give up their animals, but it happens, & their loss can be your gain! If you’re looking for a particular breed of dog, visit a few shelters & see what they have available… But don’t let your quest for an immaculate LowChen blind you from seeing the adorable, lovable mix in the corner!

This fact really speaks for itself.

56% of dogs & 71% of cats which enter animal shelters are euthanised. (That’s a fancy way of saying “killed”.) More cats suffer this fate because they’re less likely to have any identification, while dogs more often have a collar with tags. (Source.)

That’s one of the best reasons to adopt from a shelter that I can think of. You are literally saving lives. 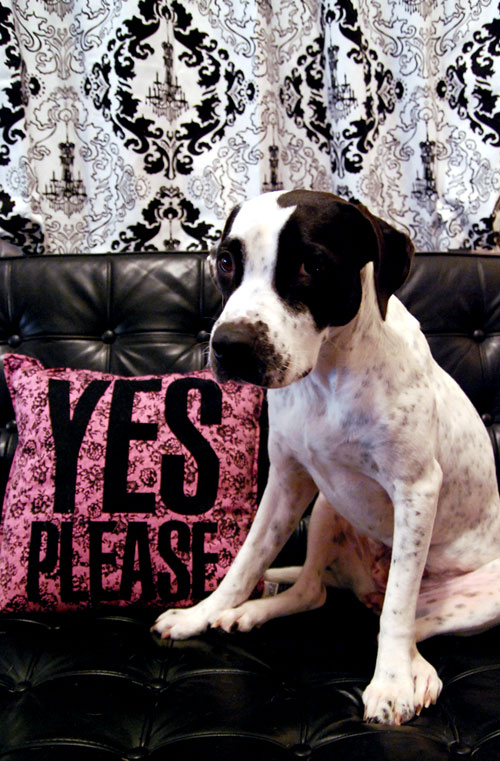 2. Knowing that you rescued an animal will amplify the joy of having it in your life even more.

It breaks my heart & brings tears to my eyes when I think about the fact that no one wanted crazy little Dolly. Sure, she’s nutty. Yes, she is 80% tongue & she likes to taste EVERYTHING! But that’s who she is, & she’s such a good dog. She is so loving & she just wants to cuddle with everyone.

She is such a sweetheart & she makes people smile when she walks past. How could no one want her?! It’s so insane to me, I don’t understand.

Maybe I’m delusional, but I feel like one of the reasons Hank & Dolly are so loving is because they’ve been abandoned before & they really appreciate having a good home. They sleep in our bed, under the covers, every night. They eat better than most people (all organic, with glucosamine for their joints & coconut oil in every meal). We love on them constantly. It’s so horrible that anyone would want to throw them from a moving van (in Hank’s case) or just abandon a tiny, pregnant puppy (in Dolly’s case).

I really hope that the love we give them outweighs the pain of the neglect they’ve suffered in the past. I don’t think it works like that, but we still try.

Animals love you unconditionally. No matter what happens, they’ll still adore you, still be happy to see you every time you walk through the door, still want to cuddle you every night.

Dogs will protect you from intruders & keep you safe when you’re walking them. (Someone would have to be insane to try & pull anything when I have Hank next to me, & no one’s ever going to try to break in once our crazy two start barking!) Cats will curl up on you & purr so loudly you think they’re powering up for supersonic flight. Fish will gape their big mouths at you & birds will flutter their wings.

Whatever your animal preference is, there is one out there just waiting to love on you. Give it the opportunity & you’ll be rewarded beyond anything you could possibly imagine.

P.S. If a pet isn’t quite right for your lifestyle right now, you could make a donation to your local animal shelter! They always need more funding & would really appreciate your help. Another option is to become a foster owner (thanks Elana!). Ask your nearest shelter for more information!

« Cherry On Top
I’m Jealous Of Other Women! An Act In Two Parts »