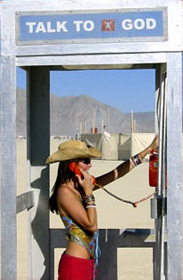 Last night I went to a talk by Sera Beak. Until last week, I had never heard of her — but was miraculously introduced to her by an iCiNG reader! Thank you, ss!

When I first looked her up, I came to her website. The picture in the middle? A photograph of a young woman in a cowboy hat standing in the “Talk To God” booth at Burning Man. It resonated with me, because I had done that exact thing — wearing almost the exact same hat — two years ago, on one of the most physically, emotionally & mentally gruelling weeks of my life.

I had a read through her blog, Spiritual Cowgirl, liked what I saw & reserved myself a place at her upcoming talk.

Alright, so, who is Sera Beak? She’s a Harvard scholar who has been studying & investigating religion, spirituality, God & divine truth since she was 11 or 12 years old. She is the author of The Red Book: A Deliciously Unorthodox Approach to Igniting Your Divine Spark, & a champion of the REDvolution. But she can explain this better than I can.

“I’ve trekked in Tibet & whirled with dervishes in Turkey. I’ve volunteered at Mother Theresa’s Home for the Dying in Calcutta & run from rabid dogs outside Buddhist temples in Kathmandu. I’ve attended intensive spiritual healing workshops in Sedona & psychic fairs in Chicago, fire rituals in the Black Rock Desert & yoga retreats in Mexico… I’ve washed Hindu gurus’ feet, eaten dinner with living saints, argued with Zen masters, & had life-altering visions with shamans. I’ve taught a Tantric Tibetan Buddhist monk how to use his new digital camera, taken the host from a Croatian Catholic mystic who had the stigmata, & had an engaging private audience with His Holiness the Dalai Lama on my twenty-first birthday.”

Basically, when it comes to spirituality, mysticism, big questions & connections to the universe, Sera is your girl. But what is she like in real life? Well, she is very human — very real. She has long, straight glossy hair with an immaculately straight fringe. She wears a pendant of two leaves around her neck. Before she started her talk, she told us that she was terribly nervous. She has short red fingernails & wears a red ring on the first finger of her left hand. She swears & laughs & sits cross-legged when she speaks.

For all her trepidation about speaking, her talk was fantastic. I wasn’t sure what to expect — would she be talking about meditation, her life, Burning Man, religion? Interestingly, it turned out to be a huge mix of topics, with a focus on defining & finding your own spiritual truth. She talked about the rebels & outliers of religion, how they lived with passion & truth & purpose. It was exciting. Inspiring!

It was also a timely message for me. I have done a lot of work on myself, emotionally, mentally & physically, & I encourage other people to do the same. But the spiritual side? Well, I guess I have stayed away from that kind of thing. Why? When I was younger, I was mad on all that stuff! I read books, I visited temples, I meditated, I did rituals, I visited new age bookstores & loaded up on crystals. I asked questions. I wanted to get closer to that big magical something I knew was there. But then what? I got busy, I guess. Life took over. Maybe I decided it was uncool — I wanted to be logical, intelligent, rational, reasonable, & being spiritual just did not fit into that.

As I started to think about what Sera was saying, questions arose in my mind. Was I really working on myself & getting to know who I was, or was I just keeping myself busy & distracted? Was x really true, or was it just something I had accepted as a belief without thinking much more about it? Was I really as “in step” with the Universe as I thought I was? How often did I ignore my own intuition?

It’s very rare that I would buy a book at a talk. Usually I feel like I pretty much know the gist of whatever it is they’re pushing, & so I listen to the talk, go home, do some research, think about it, & do a bit more research. I also don’t make a lot of time to read books these days — most books I buy end up unread on a shelf. So you must realise what an impact Sera made to entice me to buy a copy of her book!

I walked home & sat cross-legged on my bed, devouring the book as I did my dinner. I got about half-way through before looking at the clock & realising it was more than time to go to bed.

So, what is the book about? It’s about exploring religion, mysticism & spiritually for yourself. It’s about asking questions & not allowing other people’s rules or prudishness or personal issues to define how you embrace the divine. It’s about looking at religious figures, Gods & Goddesses, saints & gnostics, & doing your own research. It’s about becoming attuned to symbols or characters or stories that resonate with you. It’s about learning how to pray. (The summary? Anything plus intention & purpose. How liberating is that?!) It’s about bringing ritual into your life & living with intention. It’s about being aware & noticing when the Universe winks at you. It’s about knowing who you are, broadening your horizons & making the world a better place. It’s about mind-blowing sex, using your intuition & learning how to be quiet.

Long story short: it is fantastic. You can read the introduction to her book here, & here’s an excerpt from the start that I particularly liked.

“So what’s a smart, gutsy, spiritually curious young woman to do nowadays? Well, how ’bout taking spirituality back into your own hands? How about finding out what it means for you, through your own explorations & experiences & expressions? You know, all this spiritual stuff doesn’t have to be so esoteric or traditional or weird or dorky or intimidating or holier-than-thou. Spirituality is not separate & distinct from you & your everyday life. Igniting your divine spark is a simple perspective shift. An internal nod. An expanded relaxation into All That Is. It’s about tuning up your senses, cranking up your antennae, generating conscious living. It’s about becoming your own spiritual authority.”

I also picked up one of her postcards, which I slid into the frame of my mirror. It is bright red, & it says, “YOU HAVE THE POWER TO MAKE ANGELS SWOON.”