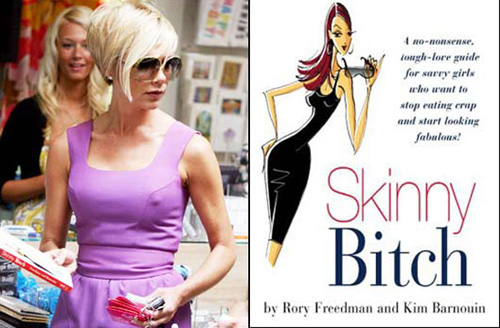 Skinny Bitch by Rory Freedman & Kim Barnouin catapulted to the top of the best-seller lists shortly after Victoria Beckham was seen toting it around town. I am just as susceptible to hype as the rest of you, & so I added it to my Amazon wishlist. I was THRILLED to receive a copy of it for my birthday (thank you so much, Song!) & read it in a couple of days.

Unfortunately, I was really disappointed by the whole thing. Basically the premise is that the authors, Rory & Kim, think the best way to lose weight is to eat healthily. Their definition of healthy is vegan. That is the agenda they push all the way through the book. I wish I had known this before I put it on my wishlist!

The content was a let-down because I have been vegan. It made me feel really good, & my body functioned incredibly well. But you know, I already know that dairy is bad for you. I already know that my body doesn’t need meat to function, & that it actually works better without it in my system. If you’ve never experimented with vegetarianism or veganism, reading this stuff might come as a shock to you — but to me, the whole thing felt like a case of “Tell me something I don’t know”.

Here is a breakdown of the book. The first three quarters are scare & shock tactics about how the meat & dairy industries work, what additives are in your food & how they affect you. The rest of it is a food list & some resources.

The first part of the book seems to be written with the intention of shaming or scaring you into being healthy (aka vegan). Here are some choice phrases: You need to exercise, you lazy shit… You are a total moron… You are a gluttonous pig… Don’t be a pussy… Don’t be a fat pig anymore. You get the picture. It was quite off-putting, as you can imagine. I am not keen on being insulted by something that I bought (or someone else spent their hard-earned money on for me). I am not one of those people who needs a personal trainer who tells me how worthless I am. I felt that their tone was pretty unnecessary. Besides which, I have learned that people respond about a million times better to encouragement & positivity than insults & nastiness. Who needs that, seriously?

However, the second half of the book is all about loving yourself & being good to yourself. Um, what? Is this a misprint? You can’t be a “fat pig” & love yourself! You can’t have it both ways, ladies! Either you like yourself or you don’t! Either you accept insults or you have self-esteem! Aaaargh. So frustrating. Talk about a mixed message. Maybe their publishers forced them to include some pleasantries for fear that everyone who bought the book would have their last Big Mac & then throw themselves off a bridge!

I have read reviews of Skinny Bitch that say it’s like reading something written by your best girlfriend. If that is true, we are in worse trouble than we thought. In real life, I wouldn’t give someone who spoke to me like that the time of day, never mind the accolade of being my “best girlfriend”! Hopefully you wouldn’t either!

Another problem I have with the book is that there is a lot of information about specific foods to eat. This would be great — if I lived in America. But I don’t. The brands mentioned are only available in the United States (& maybe in Canada). The section devoted to delicious vegan treats is a complete waste of paper for anyone who doesn’t live in those two countries.

I don’t think people realise that it’s entirely possible to be vegan & still be overweight. Frankly, it doesn’t matter WHAT you’re eating if you don’t burn it off with exercise or some kind of physical activity. (My favourite vegan food was fudge I used to make. The ingredients were dark chocolate, vanilla soy milk, peanut butter & dessicated coconut. It was not healthy.) There is a paltry mention of how you should “go for a run”, but it’s almost an afterthought. Even after all the abuse in the first half of the book, I would have felt like it had some redeeming qualities if they had put some thought into writing about possible exercise plans, or fun ways of getting your dose of physical activity.

Okay, so that’s a long way of saying I give this book two (vegan) cupcakes out of five. Those two cupcakes are for the comprehensive guide to veganism & the demonstration menus in the back. But really, if you’re interested, borrow your friend’s copy — Skinny Bitch is such a huge phenomenon that you’re sure to know someone who owns it.