Skull Disco & The Day Of The Dead 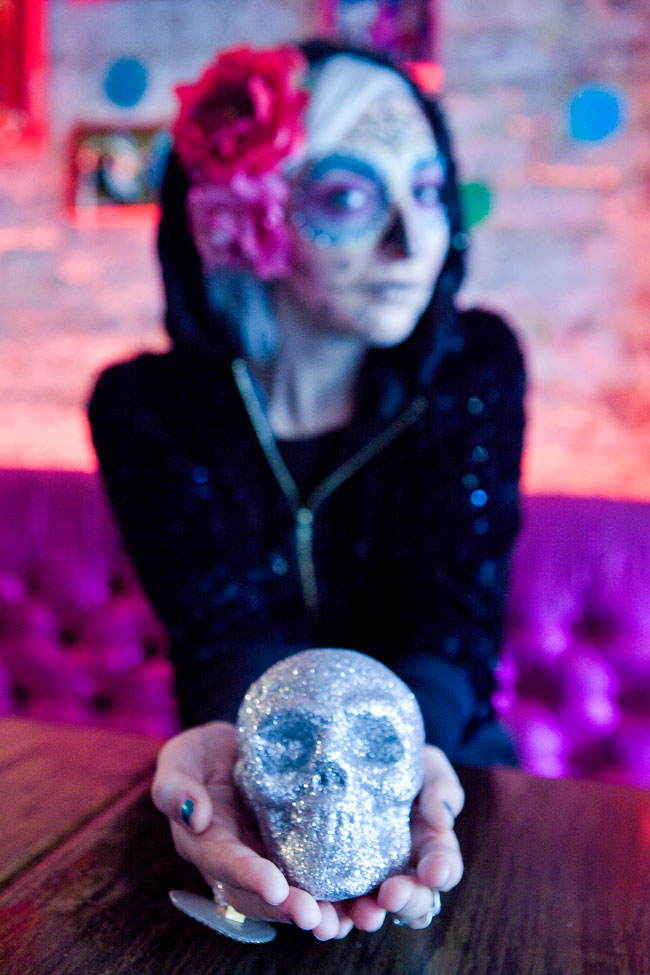 I had such a great weekend! I wanted to do something for Día de los Muertos, aka the Day of the Dead, so I enlisted my new favourite make-up artist, Ashley Spedale, to make some magic! She came over to International Playgirl HQ, set up her massive kit & we spent the next few hours laughing, gluing crystals to my face & talking about our Betsey Johnson obsessions!

When we were satisfied that I sufficiently resembled a glittery sugar skull, I met up with Yumna in Tompkins Square Park so we could document the misadventures!

We made our way to La Lucha, which is (in my opinion) the very best taqueria in New York City. It also has amazing decor & lighting. This is not a coincidence! 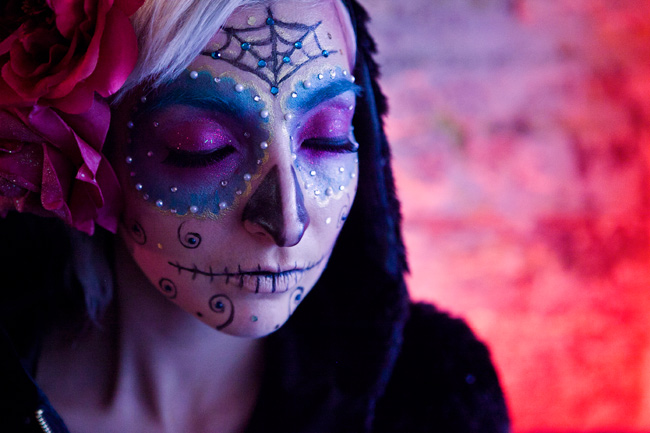 Their restaurant is absolutely gorgeous. From the glittery purple vinyl seating & the sequin-covered altars, to the wall covered in Mexican wrestling posters, it is completely sublime. 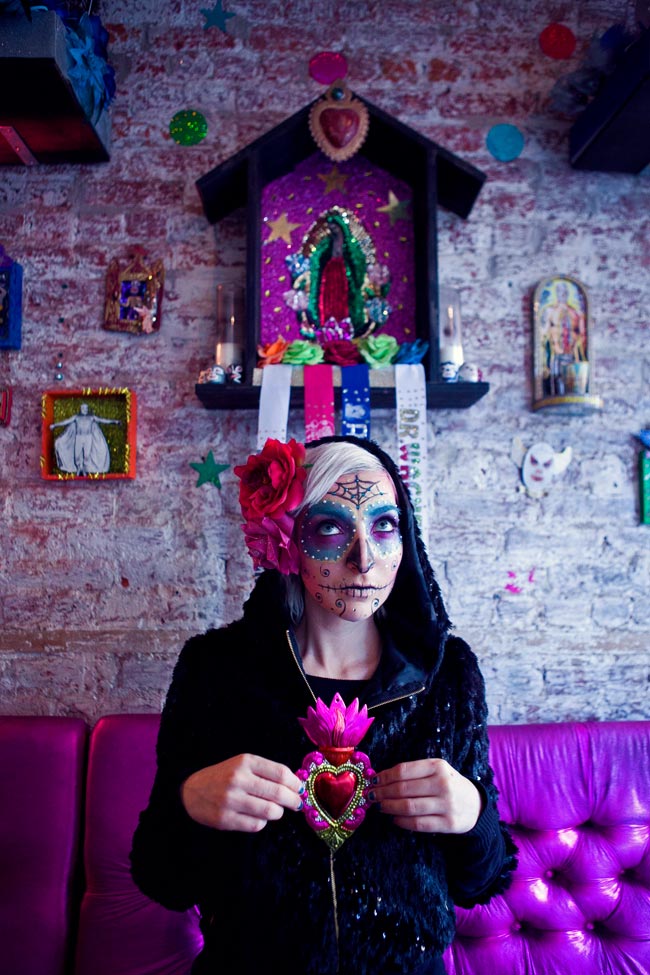 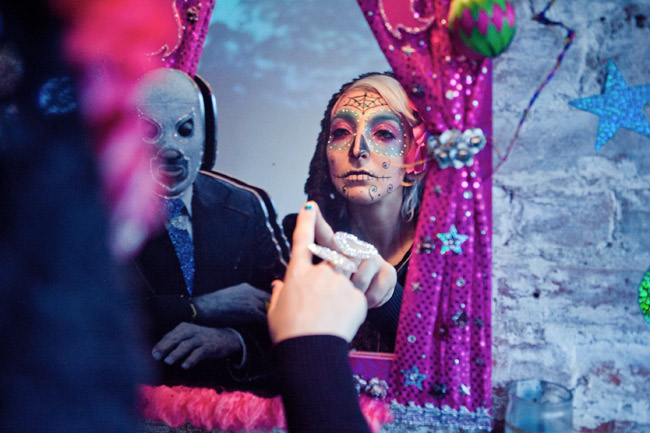 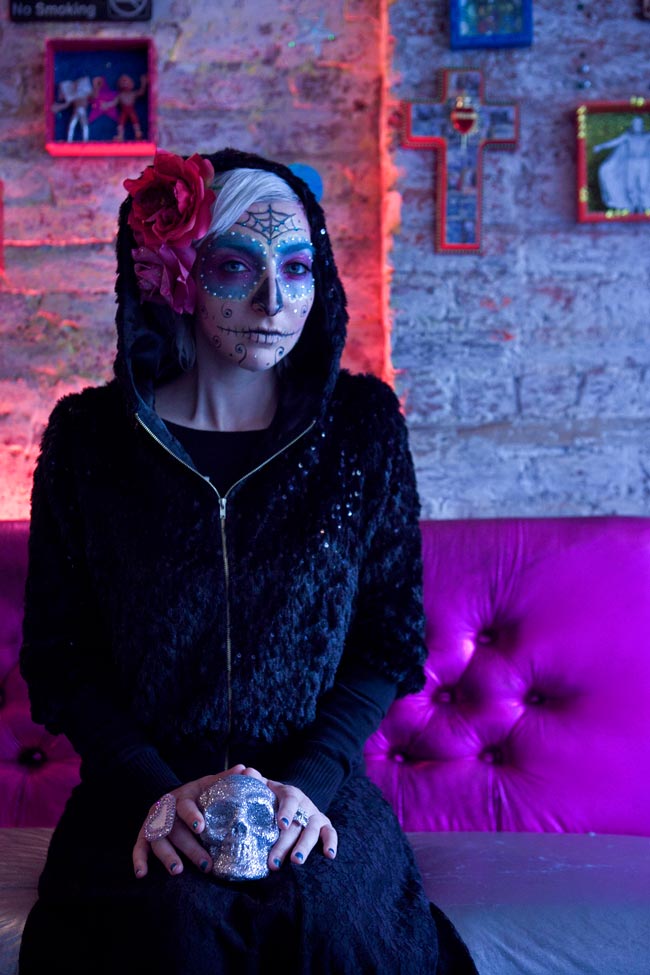 Día de los Muertos is celebrated in Mexico & in some parts of the U.S.A. It happens just after halloween & coincides with the Catholic holidays of All Saints Day & All Souls Day. It’s a time when families & friends come together to remember & honour the deceased, by building altars, putting out favourite food of those who have passed & visiting graves. While you might usually think that remembering the dead would be a solemn occasion, Día de los Muertos is often a time when people laugh & celebrate as they honour the past.

There aren’t many Día de los Muertos celebrations in New York City, but in Los Angeles, San Francisco, Texas & Arizona, the day is celebrated with public altars, gatherings at cemeteries & parades. In L.A., people congregate at Hollywood Forever cemetary & dedicate altars to fallen Hollywood icons, like Jayne Mansfield, Marilyn Monroe & James Dean. I would LOVE to see this in person! 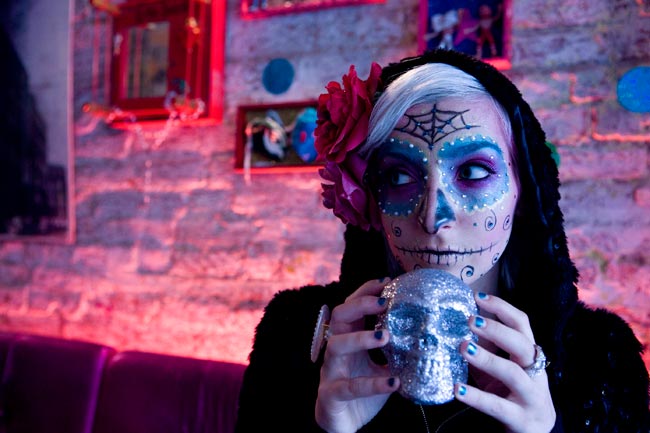 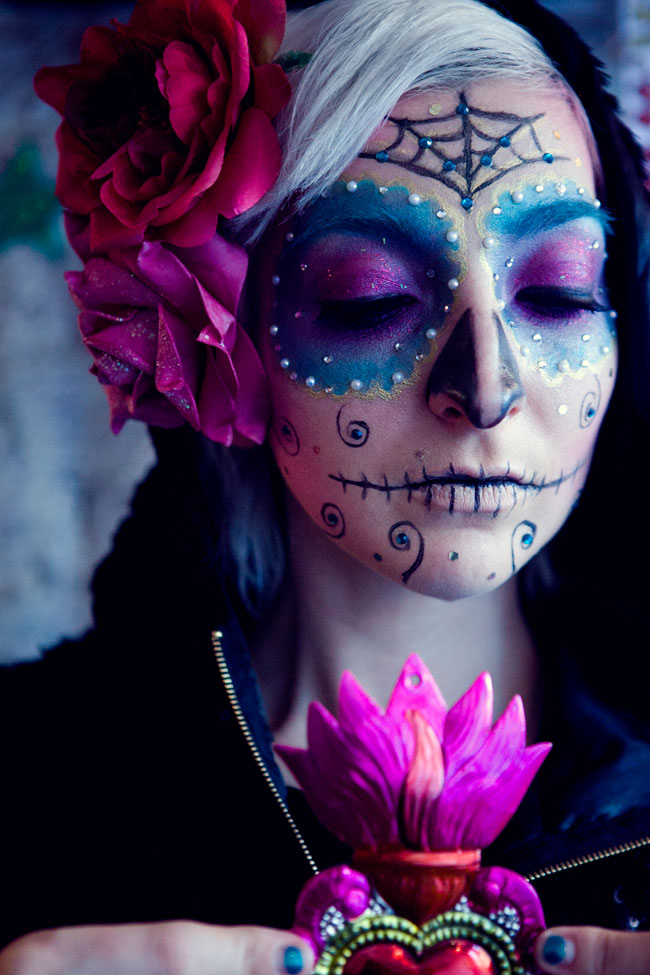 Ashley did SUCH an incredible job with the make-up! I can’t even get my head around it. When we were first discussing doing it, I did some major internet research & sent her a bunch of pictures which we could use as reference. We took some ideas from them, but what she ended up doing is SO much more amazing than anything I saw! Damn, the girl is good!

Did I also mention she’s sweet & lovely? Because she is! (Also, available for freelance work! So give her a call, why don’t you?) 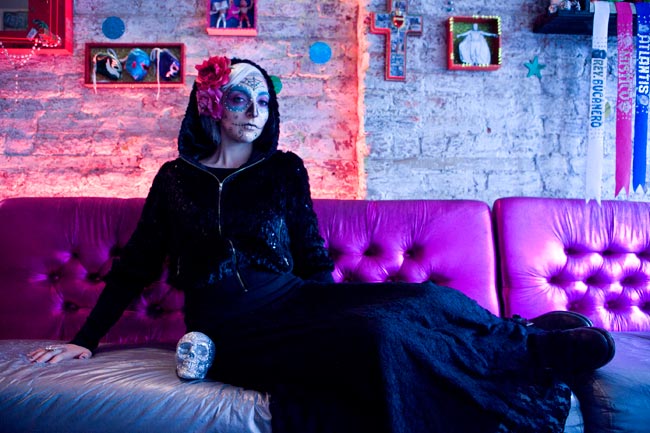 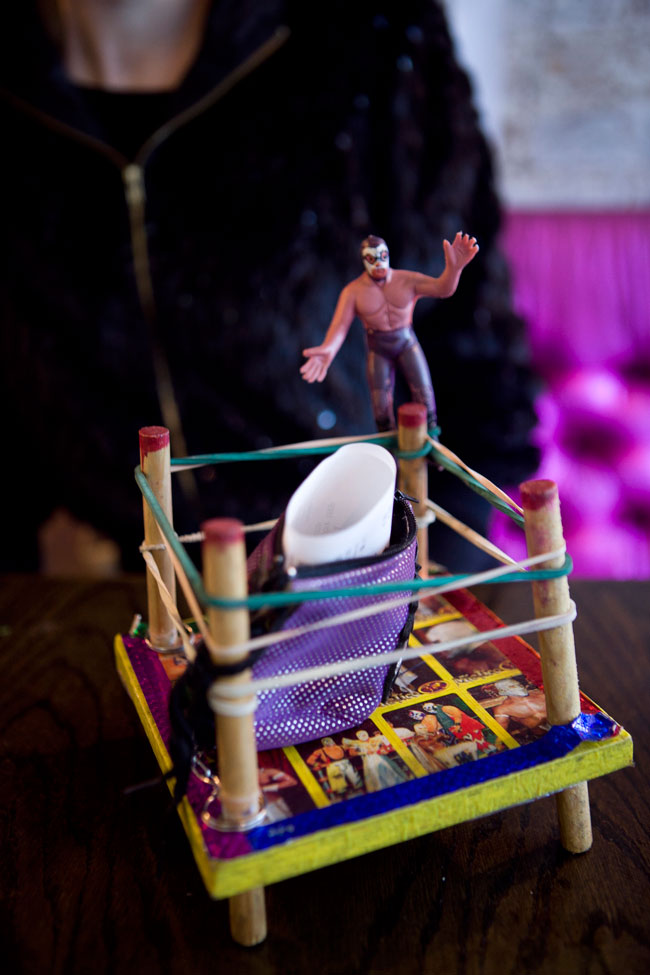 This is how you pay your bill!

When we were finished shooting inside the restaurant, we had a great (late) lunch of tacos & guacamole. So good! Then we headed back outside to catch the last of the afternoon sunshine. 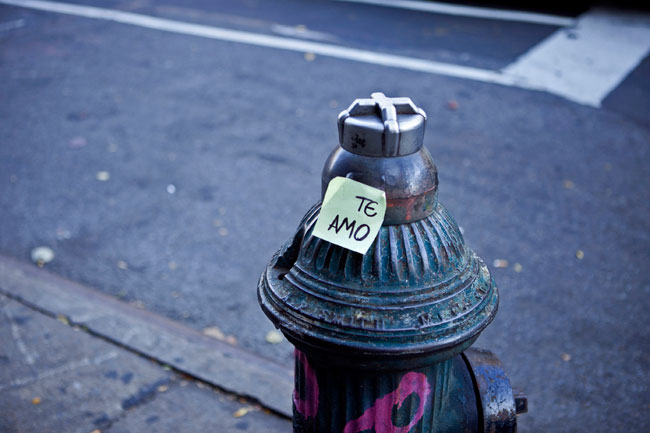 We found this outside La Lucha!

When I was in my office getting ready for these photos, I saw a couple of cans of silly string sitting in my bookshelf. I think Nubby & I bought them for our birthday party but forgot to use them. So, I had this idea to shoot off cans of pink & blue silly string — in my head, this would make for an amazing photo. The idea was great but the execution, not so much. First of all, did you ever notice that silly string pretty much has NO colour at all?! Additionally, it comes out in fits & spurts, basically making a huge, unpredictable mess.

I tried, though, as you can see in the video below! 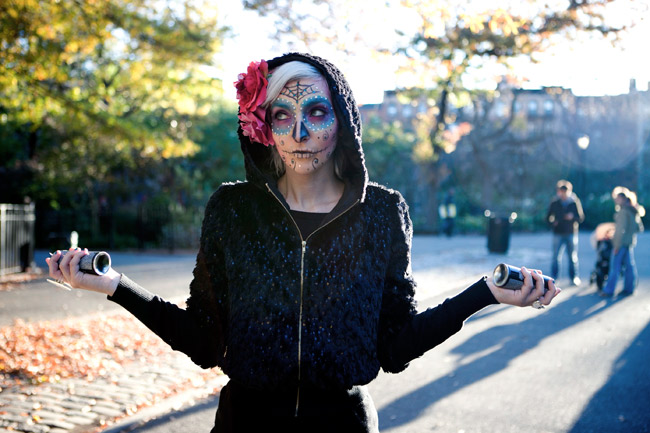 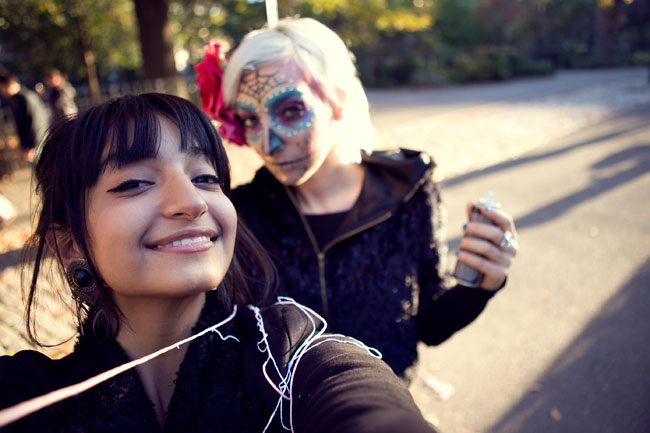 Our intrepid photographer, Yumna… & some creep!

To get a bit “Oscars” on it: I need to say a HUGE thank you to La Lucha for letting us frolick around in their restaurant, to Ashley Spedale for being fantastic & for giving up a huge chunk of her weekend, & to Yumna for being the perfect photographic collaborator! LOVE! 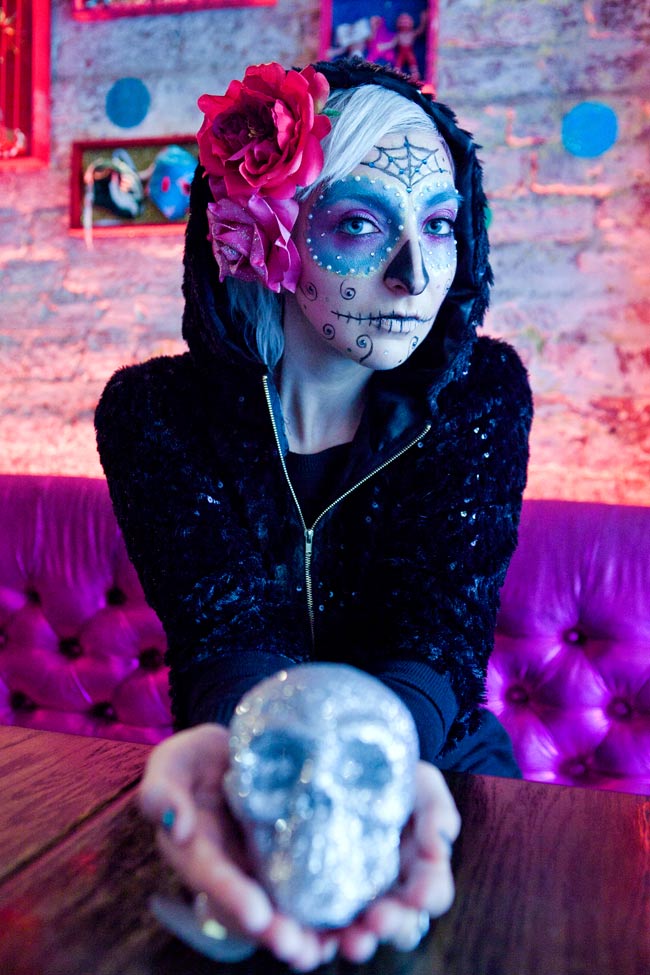 « If We Ran The World: A Conversation With Cindy Gallop
CosmoGirl: Olsenboye Behind The Scenes! »