Along with the normal New Year’s Resolutions — I mean, small actions — this year I thought I should come up with some style & fashion resolutions too. Most people aren’t completely happy with their appearance, & even if they are, there is always more to buy or lust after. I’m in the first category — I’m pretty happy with the way I dress, but it needs some tweaking. Plus, I thought the whole idea of fashion was that it’s supposed to push you, test you a little bit, make you feel slightly self-conscious before you finally twig to the fact that you look great. I’m down with that.

As much as I would like to wear a big label shift dress & Louboutins & look immaculate every day, it’s just not realistic. There are going to be days when I feel fat & the weather is crappy & I just don’t want to. Same goes for you. Go easy on yourself. With this in mind, I give you my resolutions for the year.

Develop “incognito” outfits for all the seasons.
Explanation: Everybody needs clothes that they can throw on when they’re running across the road to buy coffee/cotton-buds/batteries. I live in the centre of the city, so whenever I go out in public, even if I want to be invisible, I’m not. I would be deluding myself if I thought otherwise. Not to mention the fact that I have pink hair — it tends to attract attention, regardless of the circumstances. Often, I’m only going out for a few minutes & don’t have the time or inclination to get super dressed up. At the moment, I tend to end up dashing out in some combination of the following:
a) tracksuit pants
b) hooded sweatshirt
c) flip-flops, aka jandals, aka thongs — somewhat of an Australian tradition.
The whole thing is pretty repulsive. It is hard to feel good about yourself in this kind of garb, or at least it is for me. My intention is to come up with something I can wear to the supermarket without having to cross my fingers that I don’t see somebody I know.

Replace tracksuit pants.
Explanation: Following on from the above resolution actionable item, I need to get rid of my old tracksuit pants. The fact that I even OWN tracksuit pants, let alone TWO pairs, boggles my mind. Mostly I think they are disgusting. The first pair I initially purchased to go running in. You must understand, I am not a sporty girl — until I went to NYC last year, I used to go running in a pair of Adidas covered in pink velvet & blue fun fur. (Now I run in Reebok Ice Creams… hmmm.) The pants are okay, but the cut isn’t doing much for me & I’ve had enough. The second pair were kind of a mistake. I went to work one day wearing a loose dress with fishnet stockings, but halfway through the day, the temperature dropped & I found myself freezing to death at my desk. I walked down the road to Supre (huge evil chain-store specialising in cheap items) & purchased a pair of plain black sweats. They actually looked remarkably good underneath the dress, & the fabric was plain enough that unless you touched them, the tracksuit pants actually looked like regular trousers. Bonus. They were also cut with a very wide, straight leg, which is very flattering on me. The problems with these tracksuit pants are:
a) they are too comfortable (leading to a lot of wear — a cardinal tracksuit sin) &
b) they were $20, & I have washed them too many times, & they are pilling like crazy. Ie, they now look like tracksuit pants. They gotta go.
I’m not sure what to replace them with. Maybe classic black Adidas pants with the vertical white stripes down the side. Worn quite long with interesting trainers (like the Adidas Missy Rock boots — which seem to have disappeared from the internet altogether, oh my god, does this mean they will never be mine?!), these can actually look stylish. Yes.

Replace flip-flops, aka jandals, aka thongs.
Explanation: I bought a pair in turquoise when I first moved here. They match my eye make-up & one of my handbags, among other things, so it was a good colour choice. But they are not without flaws. Viz:
a) whenever I wear them for more than 10 minutes, they rub the inside of my feet raw &
b) they are ugly.
I am loathe to buy Birkenstocks, even though I like those clear jelly ones I’ve seen — regardless, I have yet to see them on a foot, so they might not be any good. Mostly I resist buying them because of their reputation, I think. Heidi Klum-styling be damned! The very word “Birkenstock” makes me think of hippies in knee-socks, & while I may go to Burning Man, I’m no hippy. Keep your patchouli stink far away, thank you! In fact, if you google hippy Birkenstock, you will see that I’m not the only one who thinks this way. I may end up with some kind of sandal, but mostly in replacing my jandals, I am looking for something comfortable to go with my Summer “incognito” outfits — not a fashion sandal to wear out anywhere special.

Replace New Rock platforms.
Explanation: Okay, I don’t know if this is actually going to happen. I have had these boots for a few years & they’re cute as hell. They even have visible springs in the middle. They’re just not very well designed. Every time you step & your foot flexes, the boot flexes with it… but the platform does not. The result is that the platform gets ripped away from the boot. I have had it repaired a few times but it just keeps happening, there is really no way to fix the problem permanently. It makes me sad & it also puts me off wearing them when I know I’m going to be in them for a while, in case I totally ruin them. I need platform boots, but have never found any I like as many as the New Rock style. So, we’ll see.

Wear red lipstick more often.
Explanation: I like my eyes. I usually play them up when it comes to make-up: I love to splash colour around them (blue, green & purple especially). I had heard somewhere that when doing make-up, you should either emphasise your eyes or your lips, never both. Like most things you “hear” from people, you should judge for yourself before heeding what they say. The reason red lipstick always looks stupid on me is because I have green all over my eyes! It’s too much. It is completely possible to do both of them up, but what I’ve learnt is that red lipstick needs to go with eyes that don’t clash — so, make-up that is brown, black, gold, bronze, or some other fairly neutral colour. (Duhhhhhhhh. I’m so embarrassed. Oh well, better late than never, etc.) I have discovered that it’s difficult to feel dowdy in the perfect red lipstick. Anyway, the good news is that I received two red MAC lip products in the mail yesterday — lipstick in MAC Red & Glitz Gloss in Foreign Intrigue. MAC Red is a super-bright blue-toned red with a satin finish, & it is beautiful. Foreign Intrigue is a limited edition from October 2005 — a fuschia-toned red gloss with piles of glitter. It’s like wearing Dorothy’s ruby slippers on your lips. Très belle. 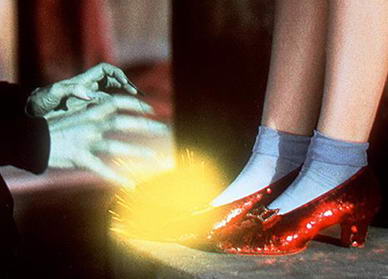 Take better care of my hair.
Explanation: It is January. I haven’t had my roots touched up since August. SERIOUSLY. People keep telling me how the contrast of black roots with my pink hair looks good, but there comes a point where enough is enough. Also, I haven’t had a haircut since the 17th of October. There have been a lot of reasons for the lack of maintenance (including travel & cash-flow), but thankfully these issues have been resolved. So onwards & upwards. It’s gonna be a good hair year.

Oral hygiene!
Explanation: I don’t like my teeth very much, but I figure I will dig them more if they’re whiter. I am currently brushing my teeth four times a day (!), twice with Colgate 2-in-1 Whitening Liquid Gel, & twice with Pearl Drops Gloss Tooth Whitener. Both came highly recommended on some forum, somewhere. I’ll let you know how it goes.

More dresses.
Explanation: Dresses are the perfect piece of clothing. In my opinion. Which is why you’re here, right?! So shush. I love dresses because they’re so easy. It is hard to screw it up. All you need to do really is pick shoes & a bag that go, & I don’t tend to find that too challenging. My favourite dress is by Kate Sylvester, a New Zealand designer, but I need (okay, want) more.

Throw out & replace everything evil.
Explanation: “Evil” here can be read as faded, the wrong size, unflattering or generally doesn’t-make-me-feel-amazing. This will be a slow process, since I am not too keen on the idea of being left with nothing to wear. It was a sad moment when, whilst packing up my clothing to move to Melbourne, I realised that I disliked about 70% of my clothing. So much of what I have doesn’t suit me anymore, physically OR stylistically, & I have had enough! My intention is to have weeded out all the awful stuff by January 2008. The most important part of this as a resolution is that I don’t then go out & replace the cheap stuff with more cheap stuff. I need to learn to save my money & buy good quality items. Every item in my wardrobe should be something I love to wear.

Buy some “real” jewellery.
Explanation: I have been wearing plastic jewellery for a long time & I think it’s time for that to end. Sure, when it comes to necklaces that I’m only going to wear for a few months, plastic is great, but if I buy anything that I want to wear for a significant period of time, it’s sad when the glue finally gives out, it leaves marks on my fingers or snaps in half. I don’t mean diamonds, since everyone with half a clue these days knows how corrupt the diamond industry is. I don’t mean normal old gold either, because it’s never really appealed to me. The yellow tones against my skin are no good. I do however like white gold & I am keen on cubic zirconia. I want some. So there.

Pampering.
Explanation: Primarily, more manicures & pedicures. My feet are in a sorry state & have been ever since Burning Man. My hands are better, but getting them done professionally is a really great (& cheap) way to make yourself feel pretty damn good.

Put on sunscreen every day.
No explanation required — everyone should be doing this! — though I will add that last year for my birthday I sank a couple of thousand US dollars into my arm in tattoos, & keeping it looking good is a top priority for me.

Extra for Experts:
I started writing this last night, & when I checked Google Reader this morning, I saw that Fashion Nation had made their own fashion resolutions for the new year — so check it out!

« The Benefits of Daily Outfit photos, part two
Tall With A Long Torso? »