Summer Lovin’, Had Me A Blast… 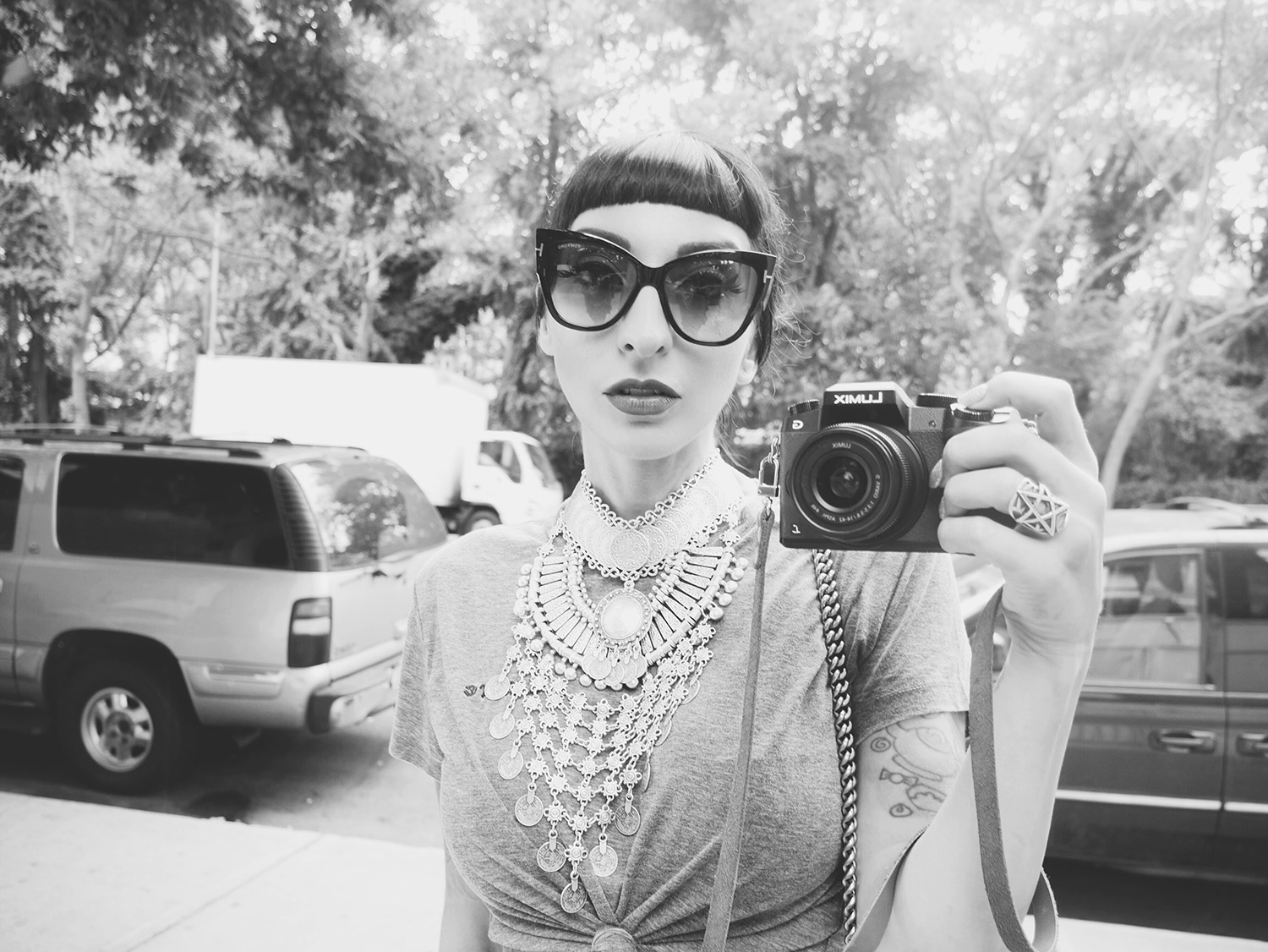 Summer in New York City is sublime. Tell me, what is better than walking around with your best friend, going out dancing until 4am, napping in the air conditioning, writing on the rooftop at The Wing, and laughing with and smooching your beloved? NOTHING, that’s what!

It has been an action-packed summer so far and we’re nowhere near done. Here are a few updates from my life…

Last week, Garnett and I watched What The Health (it’s on Netflix) and the day after, I went back to eating vegan! No meat, no cheese, no eggs, no animal products. The switch was really easy to make (though I admit, maybe it’s easier for because I’ve been vegan before and I live in NYC, land of opportunity).

Right now, I’m six days in and I’m feeling magnificent. I’m not congested when I wake up. I have way more energy, and in the mornings, I actually feel human as opposed to being a cranky, bleary-eyed mess. My moods feel more stable and even-keeled. And my body is already changing: I’m not bloated, my abs are popping, and I’m looking more muscular overall.

My only concern with eating this way is that it might be harder to maintain (and build) a bad booty, which I’ve been consistently working at for ages! However, I’ve been researching and it looks like tofu and chicken breast are very similar in terms of protein — you have to eat a little bit more tofu, but that’s not the end of the world. It is my MISSION to have a bad (vegan) ass! I will doooooo it!

I’ve never been evangelical about diet — mostly because it’s effing annoying — so don’t worry, I won’t be ranting at you anytime soon. And I can’t say that veganism is for everybody. But I do know my own body and what it responds best to! I can say that I’m feeling happier, more energetic, and more clear-minded than I have in a long time. If you’ve been thinking about cutting out animal products, try it for a week and see how you feel. You might be surprised. 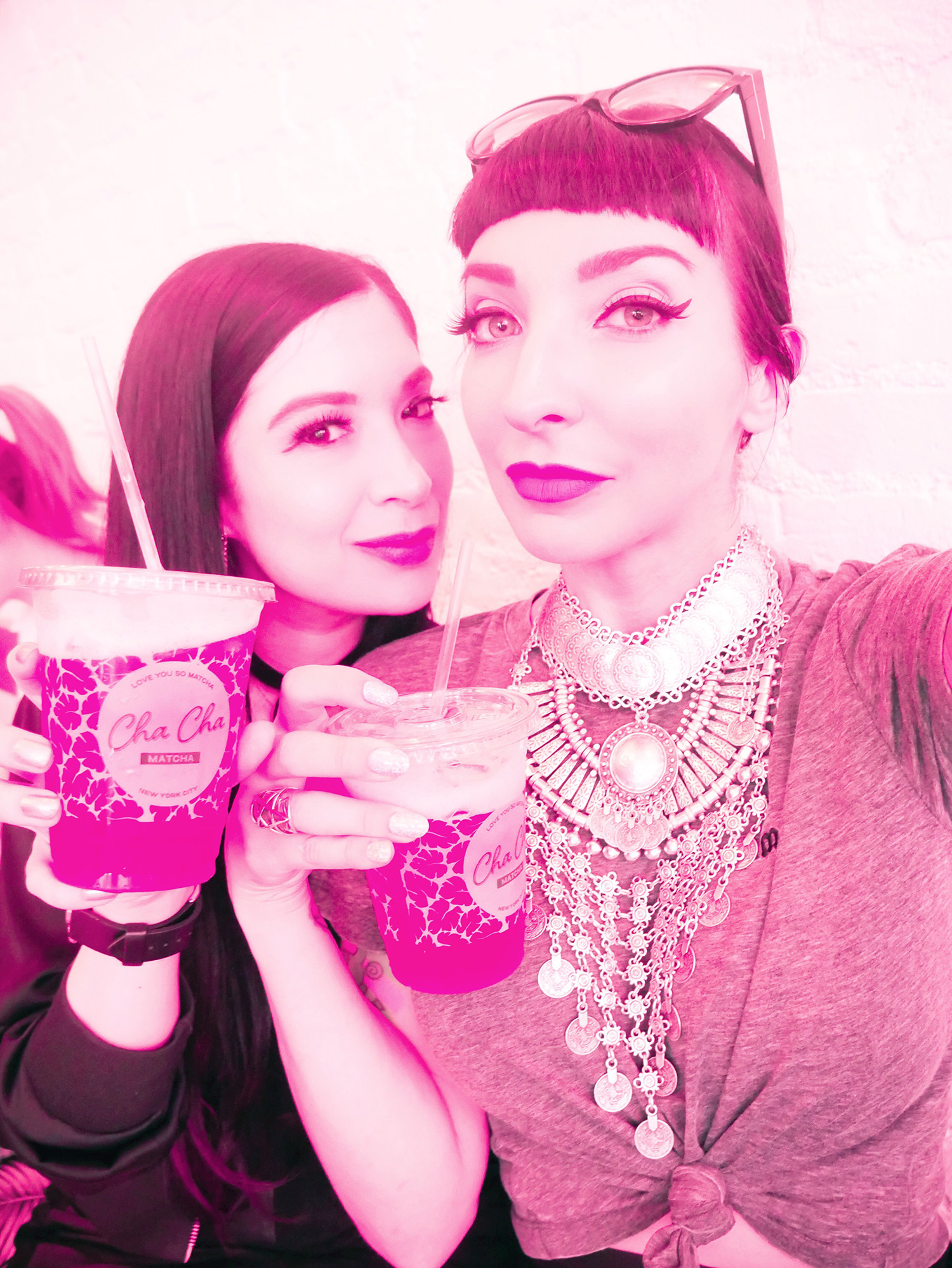 Nubs and I at Cha Cha Matcha.

My wife*, Shauna (although I call her Nubs), came to town a couple of weeks ago and we had the time of our lives. She flew all the way from the West Coast for my workshop at The Wing (here’s a write-up from The Daily Beast). Now that’s ride or die. We spent the rest of our time walking until we got blisters, shopping up a storm, and reorganising my entire apartment. We finally put down one of my new rugs from Marrakech — it’s pink, of course — and then, well, we just had to redo everything!

Darling HQ looks so much better now, and is full of cacti and succulents. Hooray! The biggest task was probably cleaning out the armoire in my living room, which contained, among other things, my old Helio Ocean in a ziplock bag! That phone was everything to me. I got it when I first moved to America — I bought it at the Helio store on Broadway in Soho — and it was a game-changer! It had internet! I could walk the streets and check my blog comments at the same time! I know that doesn’t seem very exciting these days… But back then, oh my lord. It was amazing.

Anyway, it was so much fun to have her visit, see her asleep on my couch, and make her coffee every morning. It had been way too long since I’d seen her last! Thankfully, she’s coming back to town in August… And more cleaning is definitely on the agenda. #VirgoLife

* Yes, she really is my wife! We got married in Central Park in 2008… And we’re still going strong! 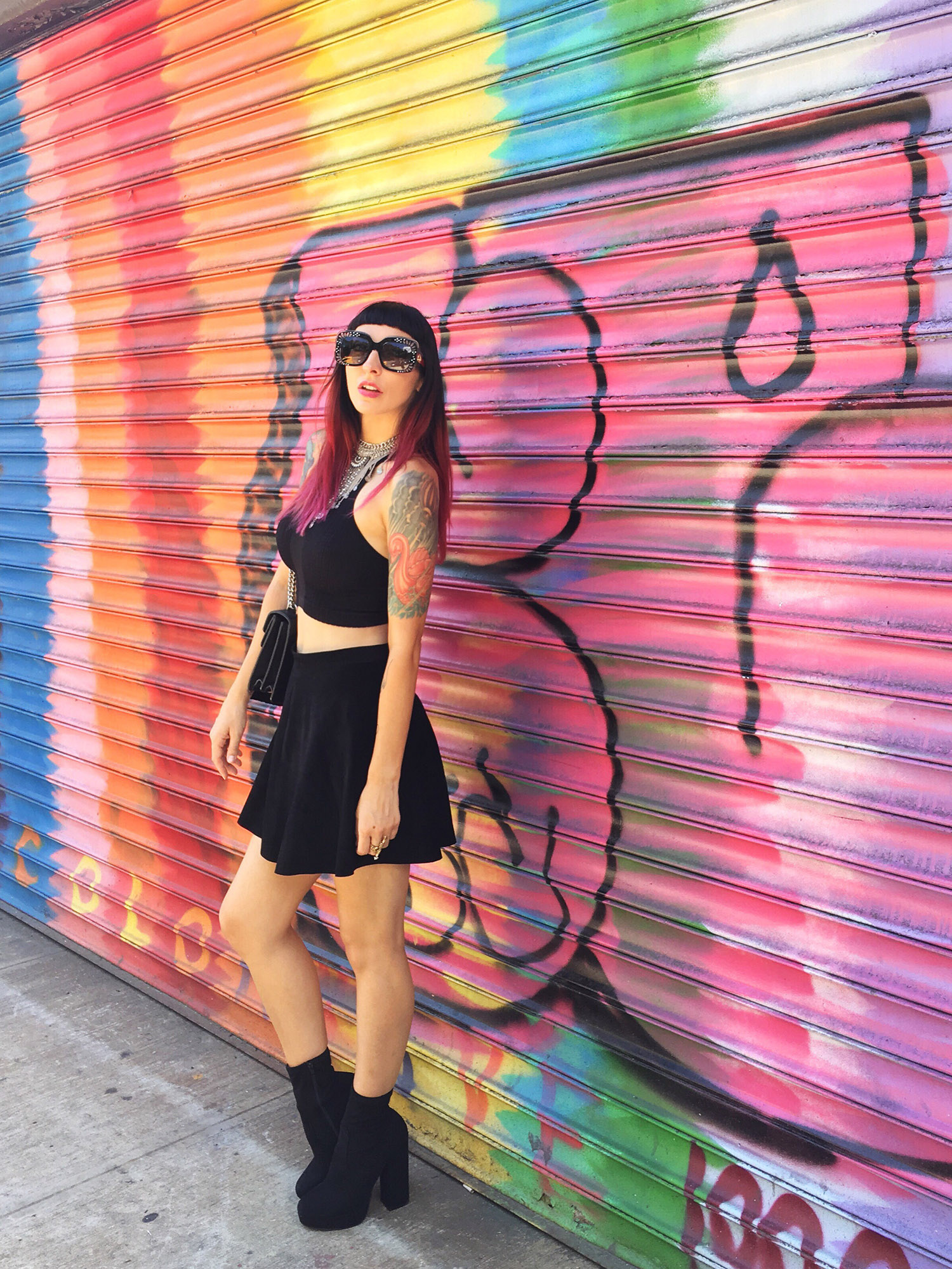 When you see a rainbow roller door…

On the work front, it’s been an interesting time. I’ve been writing about radical self love for a decade now (!!!), and while it’s still the cornerstone of everything I believe, it’s definitely time for me to explore new topics and subject areas. I’ve been working on my new book, which is all about love and relationships, and it’s such a fun topic for me to investigate. It’s nice to be back in that beginner’s mindset place — it’s challenging and invigorating all at the same time.

I’ve also been working on a mini-class to help you GET OVER YOUR EX for good! ‘Cause lord knows, it’s hard to be your raddest self when you’re still hung up on some bozo. It’s juicy and I’m really excited to release it, so stay tuned! I can’t wait to share it with you. 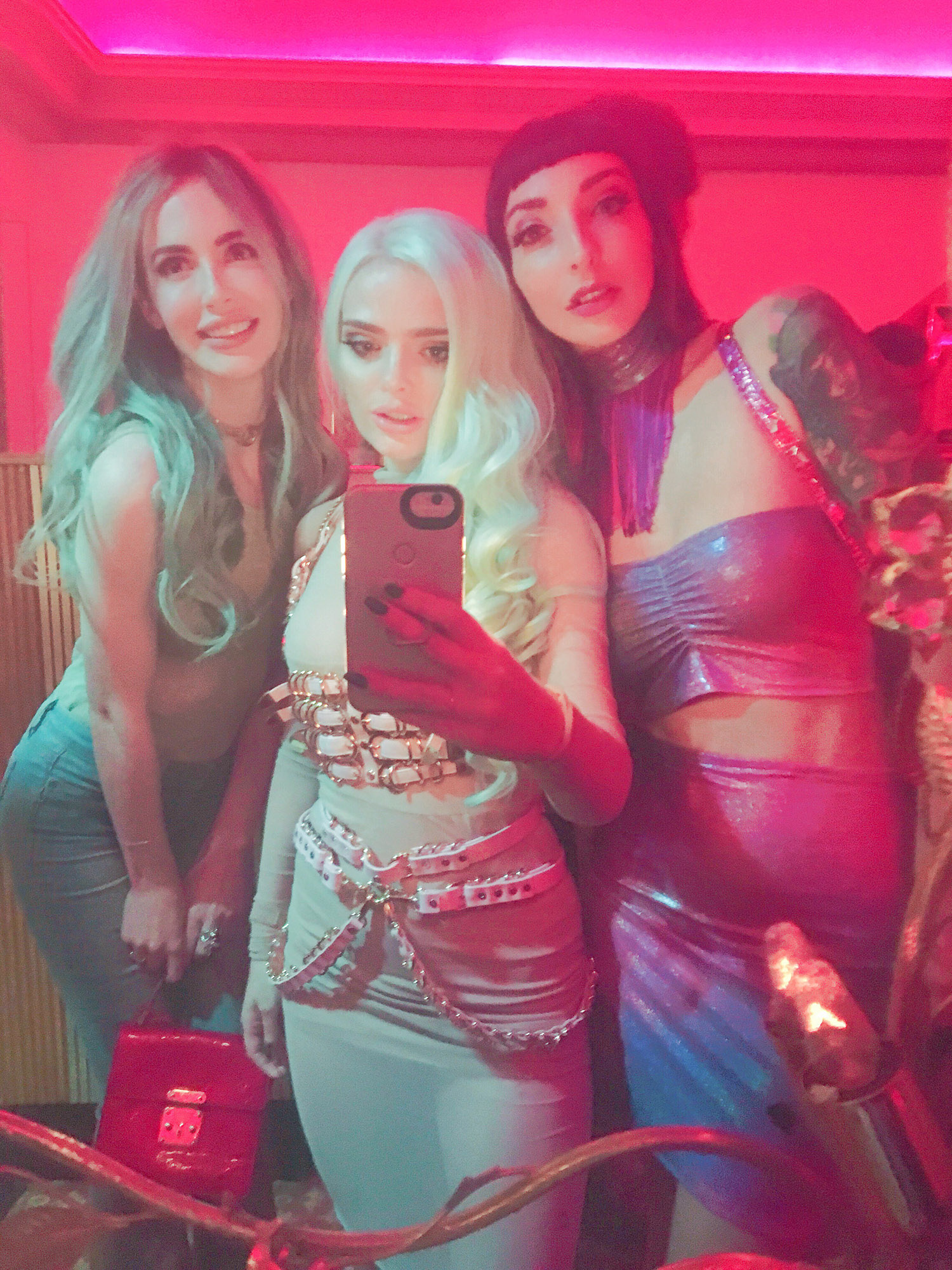 Press-on nails by Tres She. No joke, these are my new favourite thing. They also don’t ruin your nails like gel does! I’m VERY into it. Some might say I’m AGGRESSIVELY into it!

These Steve Madden boots in black microsuede (as seen above in the rainbow roller door photo!). They’re comfortable and sleek and they were less than $100, so… Go get yourself some!

Public hotel which opened recently in NYC. It’s an Ian Schrager hotel — he did Edition in Miami [one of my all-time favourites] and was a co-founder of Studio 54 — and it’s gorgeous. The breakfast is delicious, the bar is beautiful, and the location is perfect. I want to rent a room and have a glorious staycation!

Michael Jackson’s shadiest moments. Ahahah. Oh my god. Yes. When you have a moment and you want to turn your brain off, this is a good way to do it.

Adding more pink to the bottom of my hair. It feels nice to be a semi-My Little Pony again!

Writing my weekly Spirit Goddess column for Horoscope.com! I love getting a bit woo-woo for you over there. 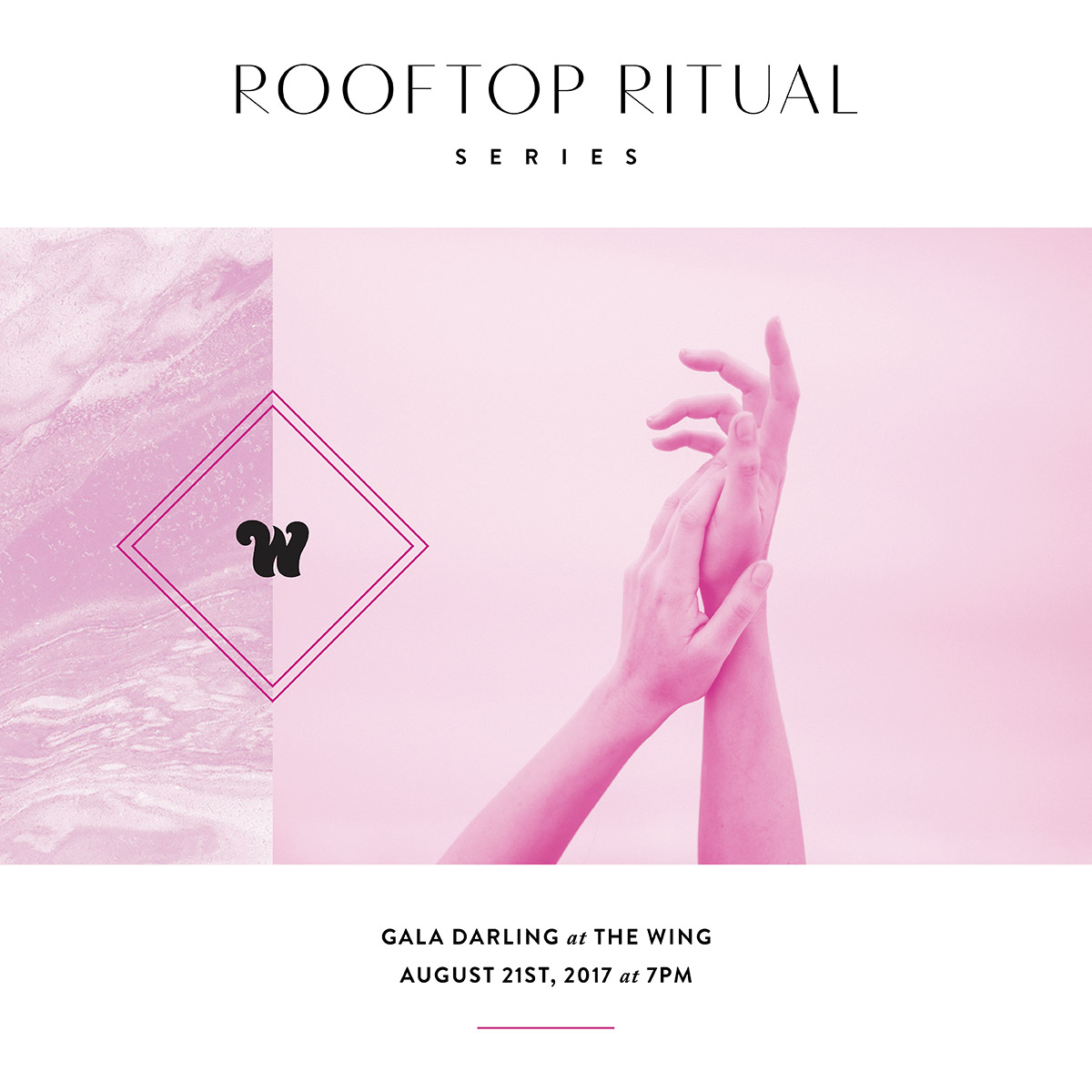 COME OUT AND PLAY!

Join me at The Wing for my Rooftop Ritual Series starting on August 21st! It’s a Leo New Moon and it’s also a solar eclipse so the power is gonna be POPPING, HONEY! Yes, we will truly be on a rooftop in the middle of New York City, surrounded by candles, making wishes and loving ourselves HARD! You can grab your ticket here and I recommend doing it today because the spots are very limited! We get started at 7pm and it’s going to be pure magic.

There are spaces left for the Radical Self Love Temple retreat in Tulum, Mexico! Come away with me and Veronica Varlow for 5 days of ritual, radical self love, dreamy portraits, and the adventure of a lifetime. Meow! We’d love to have you! And as always, hit me up if you have any questions.

« The Most Destructive Thing I’ve Ever Done…
Carousel: Love Spells For Your Sign, Sexual Auras, Criticism, And Pussy Confidence »