Sunset And Sailboats In Santorini… 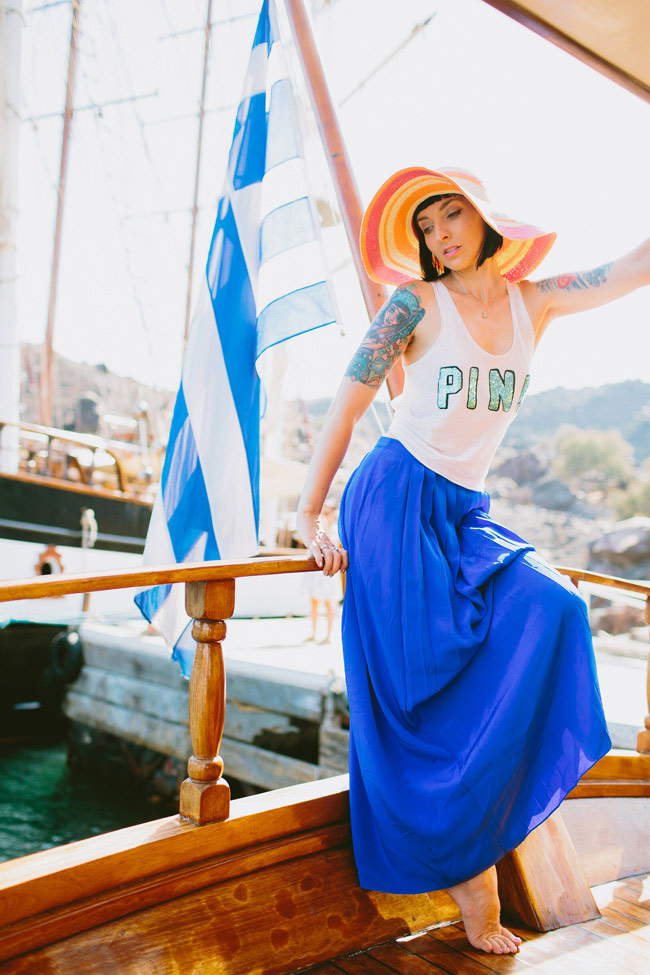 Words cannot describe the beauty of Santorini. The sea really is that blue, the houses really are that white, and staggering views surround you at every turn.

For the three of us, it was the trip of a lifetime, and for a change, I didn’t load us up with a full itinerary. The only thing I really wanted to do was go out on a boat… And so we did. 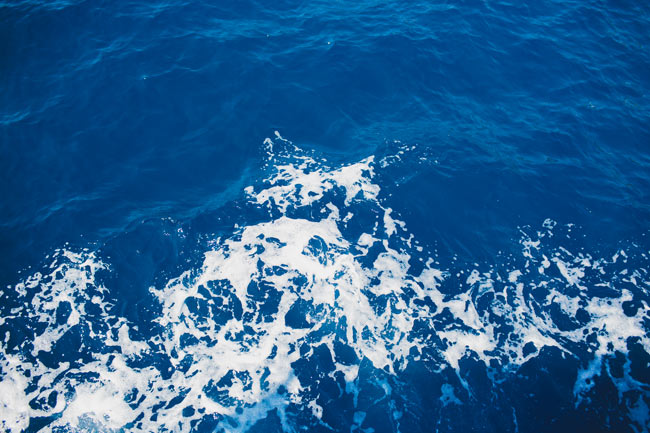 Originally, we were going to hop on a fancy catamaran and zip around the Aegean Sea, but it was all booked up. After a long walk in the sunshine, a few confusing interactions and a terrifying cable car ride, we found ourselves onboard an older vessel, laden with character (and very enthusiastic young Greek men).

We quickly snagged prime seats on the upper deck of the boat, luxuriating in the sunshine while a mix of Europop and very intense Greek music blasted out of the speakers. 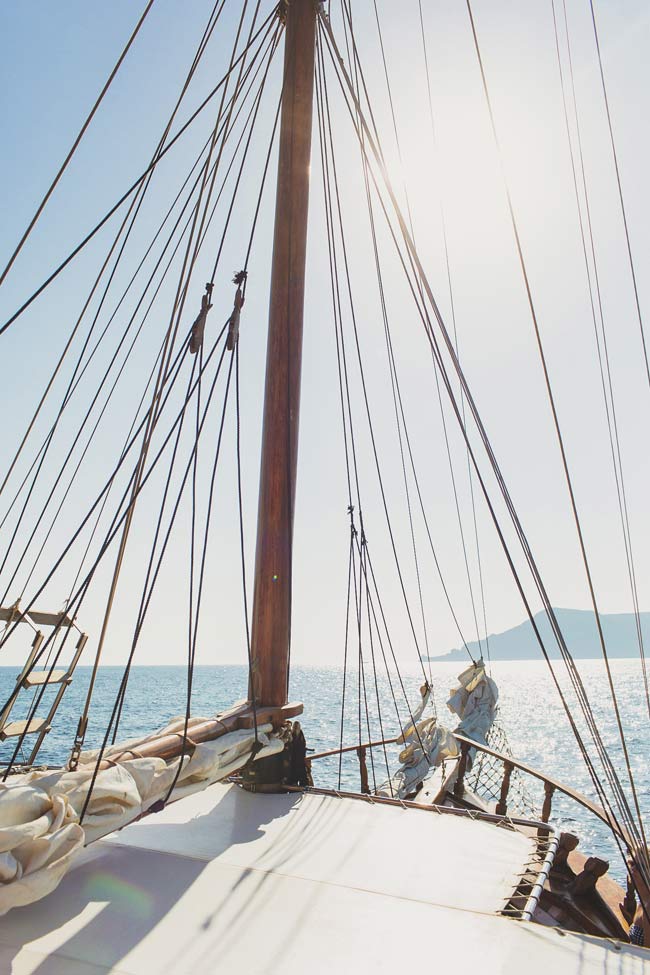 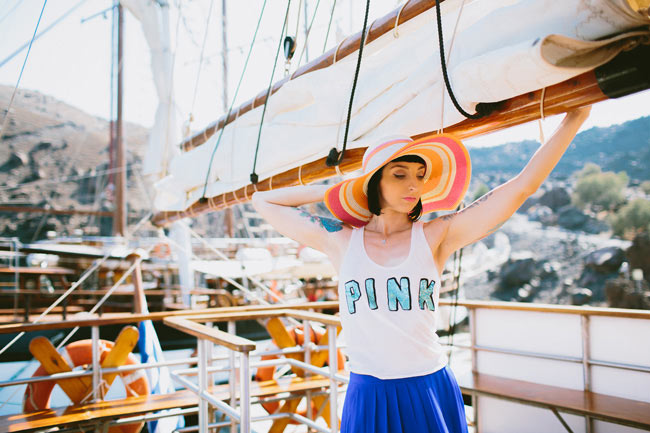 I haven’t spent a lot of time at sea (yarrrrr!), but I decided blue was probably de rigeur. I threw on a striped sunhat from Forever 21 (here’s a similar one from Kate Spade), a sequin tank from Victoria’s Secret Pink, and a silk maxi skirt from Tibi. It felt like the right thing to wear…

When you’re in Greece, you have to get in the sea for a dip. Our boat stopped at some hot springs and we slithered into the water, probably much less gracefully than we had hoped.

Kat and I spent most of the time in the water laughing hysterically. The reason for this is because a sleazy man had dived underwater, pretended to be a shark and grabbed my foot! It gave me the fright — and creep-out — of a lifetime! Where were our husbands when we needed them?! 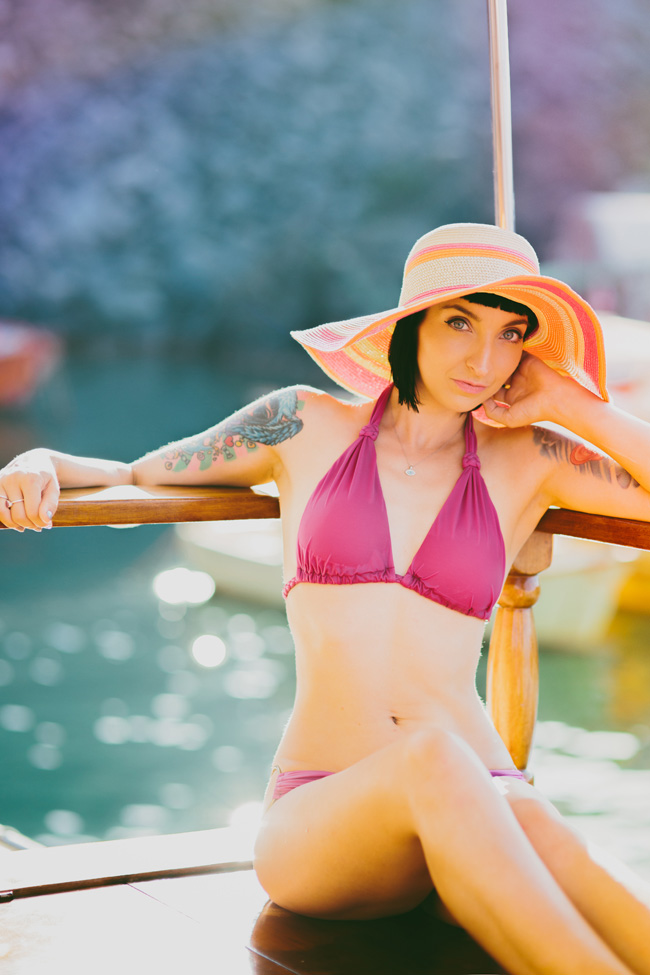 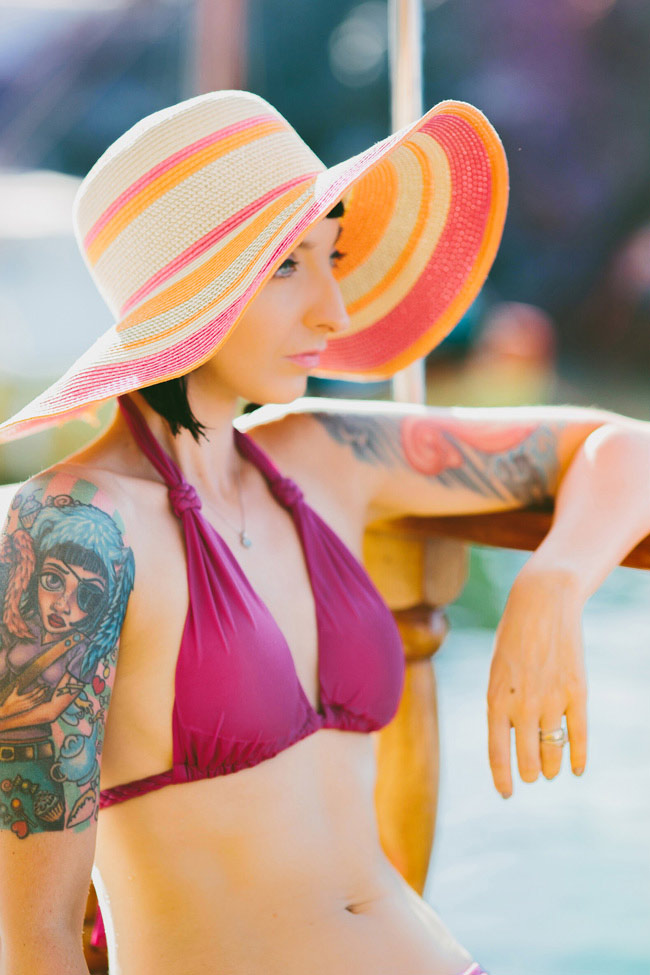 I was really in my element hanging out on this boat in a big hat and a bikini. Very lady of leisure. Is this what Paris Hilton feels like all the time?! And I’m so in love with this bikini from Vitamin A, who totally hooked me up with never-ending swimwear and jewel-coloured kaftans. Bless! I can’t wait to take them to Australia (20 days to go)! 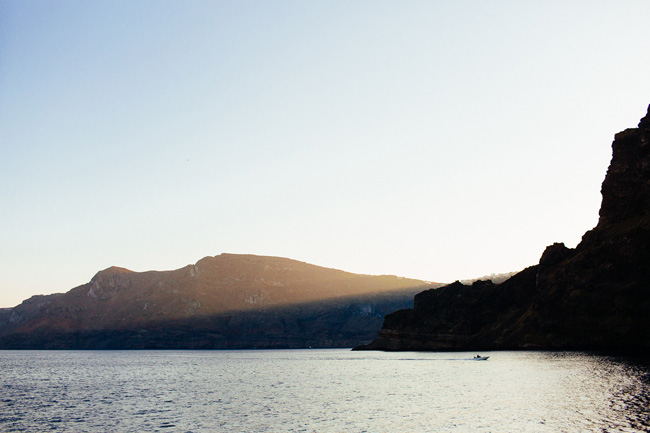 Before long, the light started to change. What better way to celebrate than by dancing? 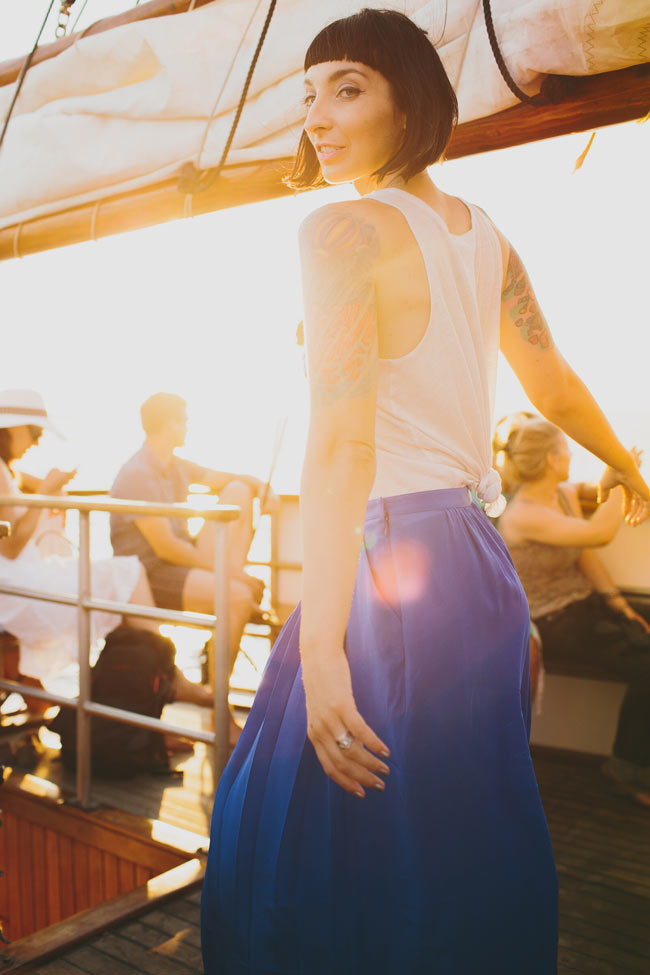 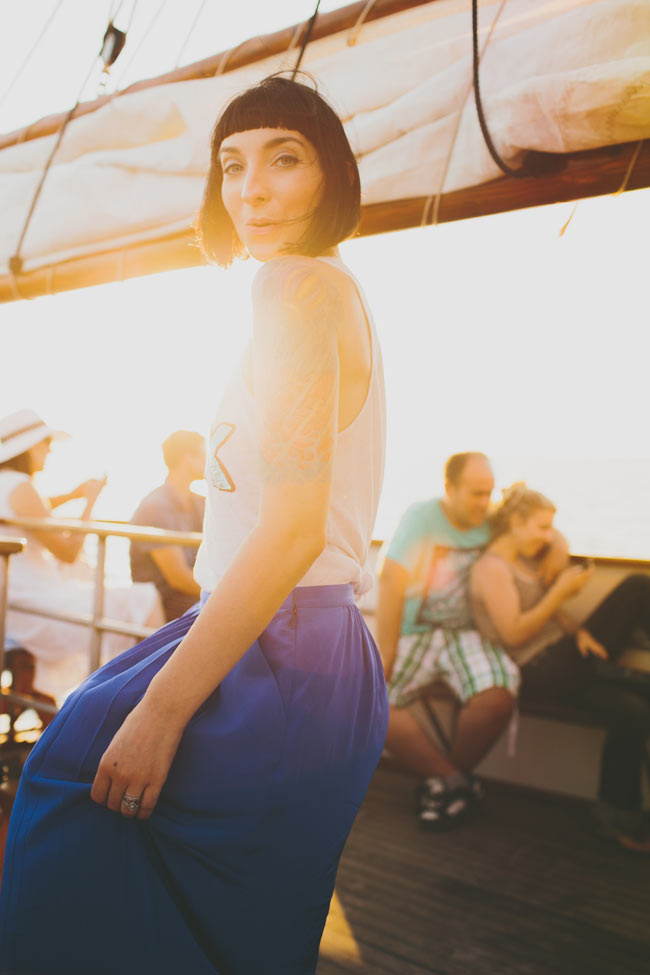 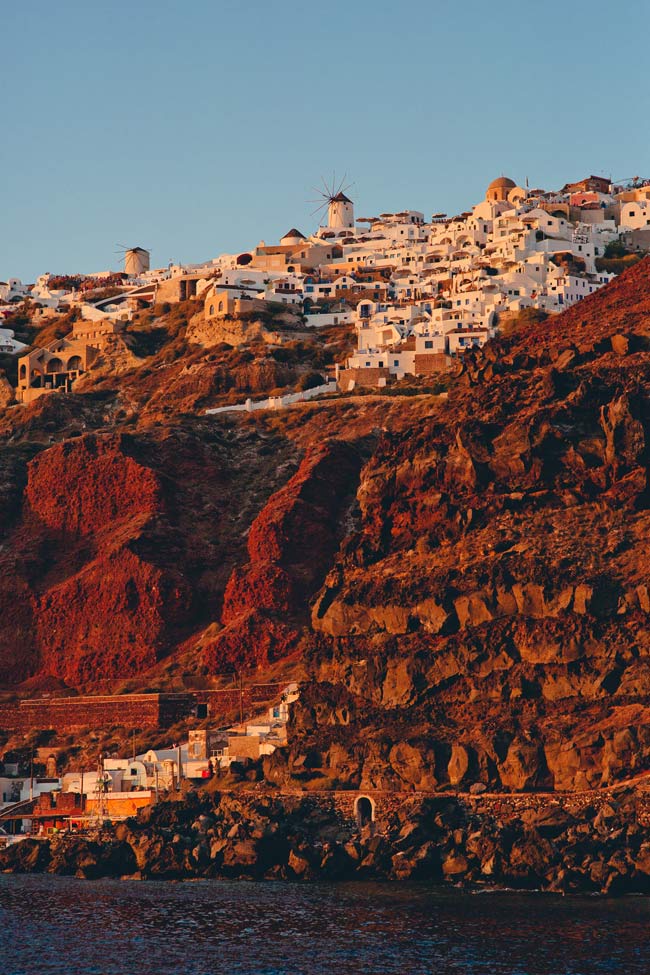 After a couple of glasses of local wine, our boat bobbed past Ammoudi port and we realised we were close to the villa where we were staying. We batted our lashes at the captain and asked if he could let us off early. He obliged, and we hopped off the boat.

“It won’t take that long to climb up the hill I’m sure,” I said, optimistically.

214 steps later, we were all singing a different tune! 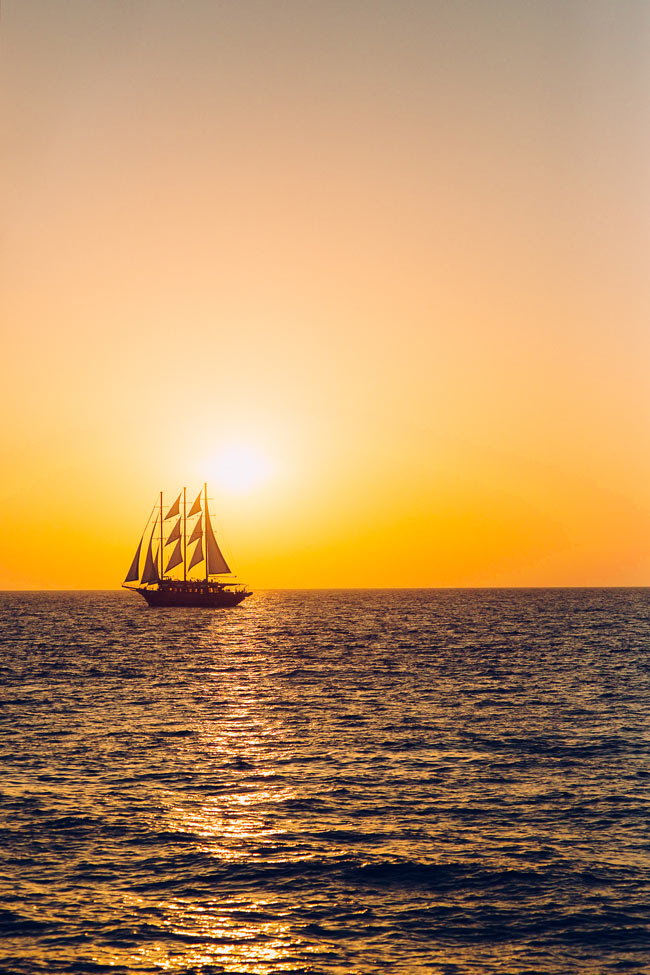 Thankfully, there was plenty to look at as we scaled the steps. The sky glowed orange around us, and the lights from the villas began to twinkle. Finally, the sun dipped down below the horizon and everything bloomed red. Crowds of people gathered along the cliff edge cheered and whooped. Lovers smiled at each other and kissed.

Just another beautiful sunset in Santorini…

Still swooning, and who could blame me?!

« These Are A Few Of My Favourite Things: September 2013
Radical Self Love In Brisbane! »