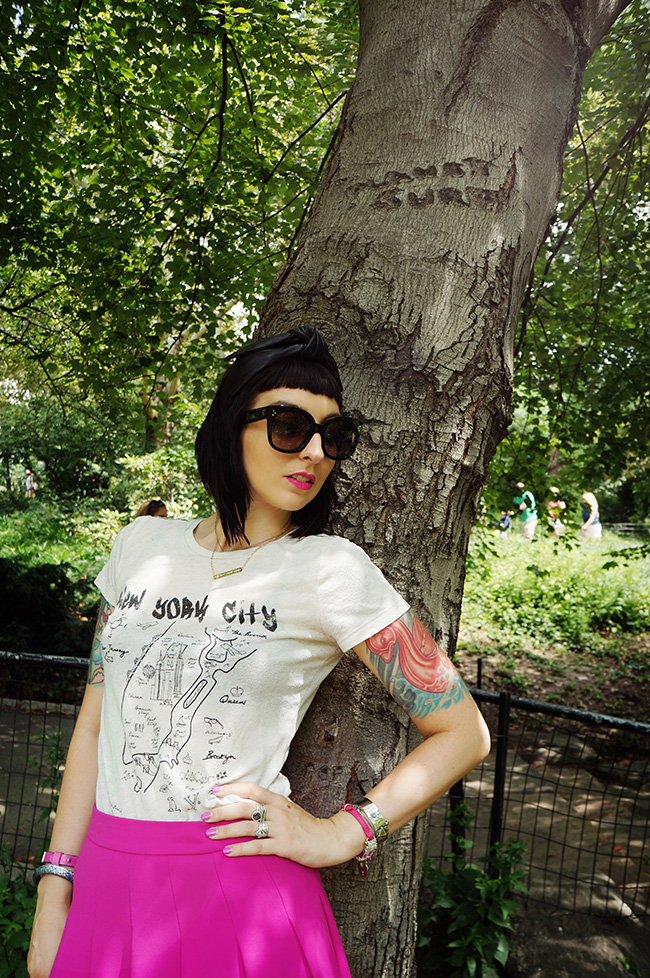 This has been one of the most wonderful summers, but… I admit… I’m ready to start bundling up. Confession time: in Amsterdam, I bought this sweater. I’m stocking up on hats (I got this one in navy blue, and a bunch of new beanies). I’m looking lustily at blazers and stockings.

This morning, as I made tea, I had a sudden rush of excitement while thinking about winter. I know that by December, I’ll be 100% over it, but for now, I’d love to be able to wear a cardigan!

Do you get like this, too? It’s like perpetual the-grass-is-always-greener, but for seasons. I blame it on my upbringing in New Zealand! It’s always so mild there, and I wish NYC could be a little more like that. NYC is a place of extremes: it’s either sweltering hot and humid, or frozen solid. Mike and my friend, Tommy, like to tell me that I only enjoy the weather for about two weeks out of every year. Sadly, it is true!

Alright, let’s switch it up, and try a slightly different format today. If you write gratitude lists too, I encourage you to give this version a shot! Instead of listing lots of little things, I’ve chosen five things I love, and am going a little deeper into my explanation. Give it a go!

Beyond The Pale Motel
What can I say other than “Wow”?! I read an advance copy of Francesca Lia Block’s Beyond The Pale Motel on the flight back from London, and it kept me thoroughly gripped the entire time. When Francesca emailed it to me, she wrote, “It’s dark. I hope you enjoy.” She wasn’t kidding. It’s magnificent: very dark, very sexy, and so, so good. Don’t expect Weetzie Bat to pop out of the pages: even though Beyond The Pale Motel is set in Hollywood, this book is about the city’s grim underbelly. I absolutely loved it, and it keeps rebounding into my thoughts a week later. The hardcover will be released September 16th: pre-order it if you know what’s good for you!

Involuntary Kiwi moments
The other day, I was walking Dolly (and wearing the hat I mentioned earlier). A big gust of wind blew, and my hat almost went flying. Totally without thinking, I said, “Bugger”. You can take the girl out of New Zealand… !

Our new couch
…Otherwise known as the most comfortable couch on the planet. I can’t even tell you how much we love it. It was delivered a couple of hours before I flew to Europe, so we — as in, the couch and I — have been getting acquainted. I ordered it in Chenille Tweed, in Frost Grey, and I’ve been working from it most days. The couch cushions are really deep, so you can sit back and completely relax, and it’s wide enough (75 inches!) that I can lie all the way across and fall asleep on it (and trust me, that has happened). I’m so obsessed!

Being back in my routine
I absolutely love excitement, spontaneity, and not knowing what’s around the next corner. It’s the best, and it’s what I eat, sleep and breathe when I’m travelling. But when I get home, my GOD, it’s wonderful to slot back into a routine. Waking up in my own bed, eating oatmeal with almond milk and drinking a cup of yerba mate for breakfast, writing all morning, and going to the gym in the evening, is like living the dream. Coming home always makes me so thankful for this life.

Focus and relaxation
I’ve been working on something exciting (!!!) this week, and I’m psyched about it. Because I’m so happy to be working on it, the time has been flying by, and I’ve been able to focus like a laser. Of course, by the time I’m done, I’m absolutely exhausted… So I’ve been hanging out, watching Bored To Death, Daria, Extras, and The Birdcage (sniff). It’s so nice to unwind at the end of the day.

I wanted to add to this post how devastated I am by the passing of Robin Williams. He was always my favourite comic, and I adored him. It’s easy to go down a dark rabbit-hole, reading about his last days, and theorizing about what made him feel that he should take his life, but I promise you that it won’t make you feel any better. Instead, if you loved him, celebrate his life by watching your favourites of his films, laughing out loud at his spectacular stand-up, and remember him as he would have wanted to be remembered: making the world smile.