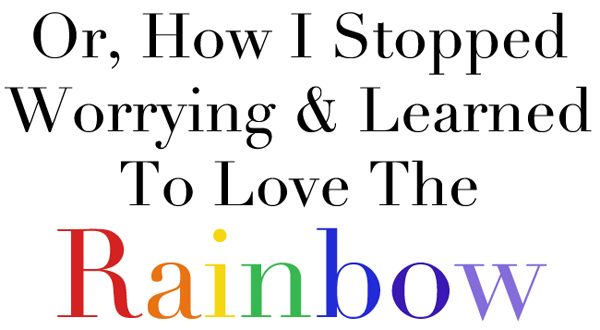 It’s 10am on a Friday. There is a quiet hum echoing through the streets of DUMBO from the traffic overhead. The streets are sparsely populated, with the exception of the occasional stroller-pushing mother or hungover hipster.

Suddenly, the area is plunged into cacophony when a marching band, dressed entirely in red, start blasting the notes of a jolly polka… & they’re not alone. These merry men spearhead a procession of 200 people dressed like a rainbow which snakes through the streets. Onlookers stand staring, mouths slightly agog!

Tina Roth Eisenberg — known around the internet as Swiss Miss — is wearing a bandleader’s hat, & swinging a baton. She’s up the front with the marching band, leading the way. Behind her are clumps of people dressed in red, orange, yellow, green, blue, purple & pink. The mix of piano accordion, saxophone, trumpet, tuba & drums has everyone dancing & waving sparklers triumphantly.

But first I have to go back to the beginning…

Creative Mornings is a monthly event which happens in cities all across the world. A bunch of excitable people get together on a Friday morning to listen to a 20 minute talk, eat breakfast & meet new people. Sounds pretty great, right?

I had heard of Creative Mornings through the grapevine, but for one reason or another, never had the opportunity to go. At the beginning of November, I decided to change all that. Some kind of primordial instinct kicks in when the weather starts to cool in this city. We suddenly realise that soon, it’ll be too cold to want to go anywhere, & our calendars start to buckle under the heaving strain of our newly ambitious social life. My embrace of Creative Mornings was a little like that. As a gal who works from home, I know that by mid-December, the thrill of leaving the house will have all but entirely dissipated. You gotta make the most of this kind of enthusiasm!

It makes sense that as soon as registration opened for November’s event, I was all over it. Then I actually read the description of the event.

Just so you know, this month’s CreativeMornings is going to be unusually colorful. Led by our color-loving speaker and rainbow queen, Jessi Arrington, there will be a short, action-packed Rainbow Parade directly after the talk in DUMBO, NY at 9:45am.

With that said, for this month’s event, you need to dress in ideally a single color (at least partially). Join the fun, wear your favorite color, and we promise all of your friends will be soo jealous.

I didn’t really know what to expect, but I was enthusiastic about it anyway. I wore a cobalt blue dress (& a brown faux fur coat — it was FREEZING cold!) & headed over to Brooklyn to meet Lydia Hudgens (who took the following photos!), & see what we could see.

Jessi Arrington was the November speaker. She’s a designer for whom colour is extremely important! She has a cute feature on her blog where you can view her outfits by colour, & she only ever buys vintage. She stood on-stage in a sequinned tank & a multi-coloured circle skirt, & told us about her personal tips & tricks for harnessing her uber-creative powers. 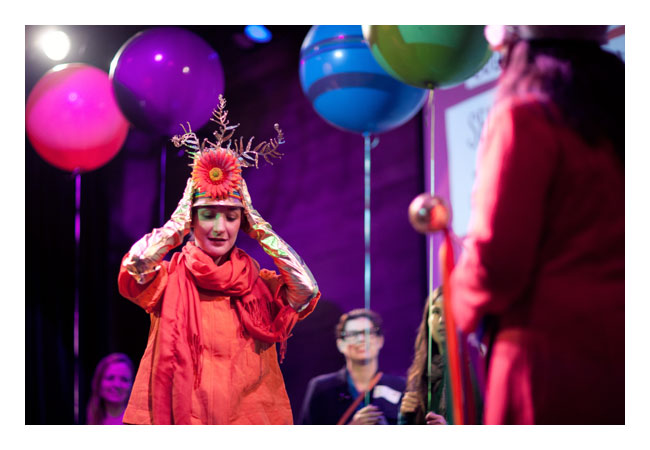 Twenty minutes passed quickly, & before long, Jessi was changing — in front of us, onstage! — into a neon orange outfit, complete with rainbow petticoat, gold gloves & nutty hat. She handed out coloured balloons & told us to follow a balloon that matched our outfit. We quickly scoffed the rest of our chocolate croissants & peppermint tea, & went outside to join the madness… 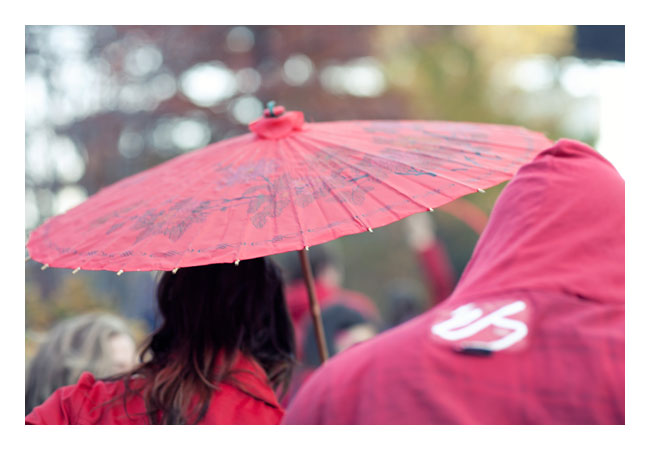 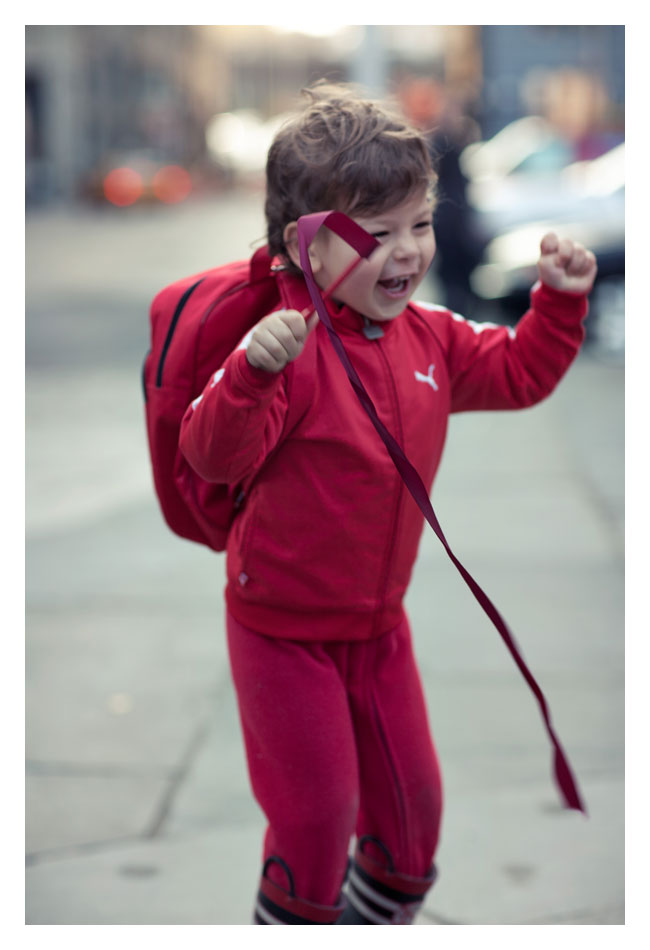 The red people went first… They followed the marching band at the front, & headed up the parade. Decked out in shades of scarlet, vermillion, crimson, ruby, cherry, cerise, wine, coral, rose, maroon & cinnamon, they were a sight to see. It made me think of all my favourite people, for whom red is their favourite colour. (This list includes, but is not limited to my husband, my father, my mother, & Nubby Twiglet! I think I attract these “red people”!) 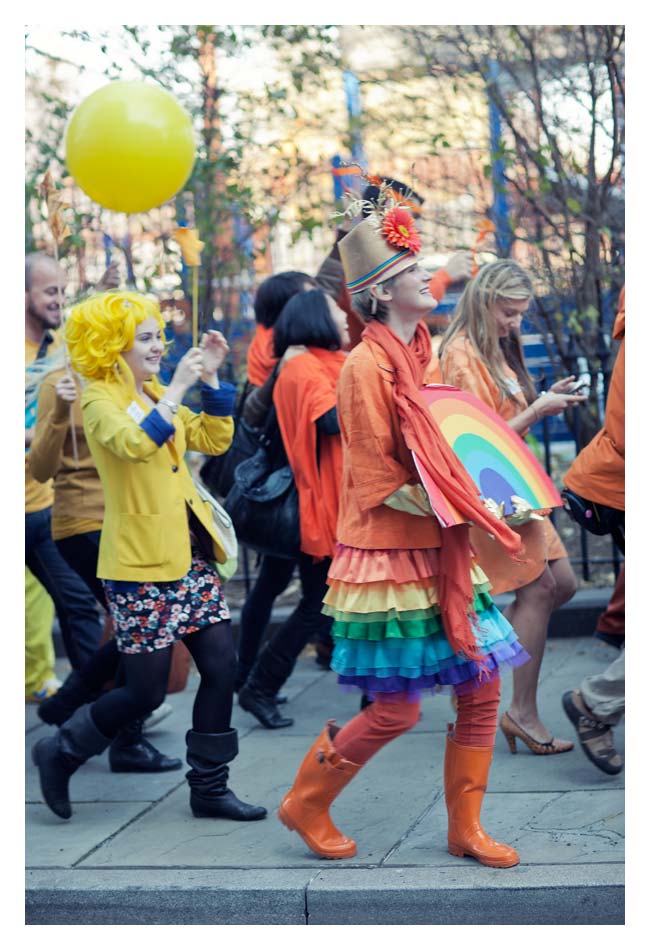 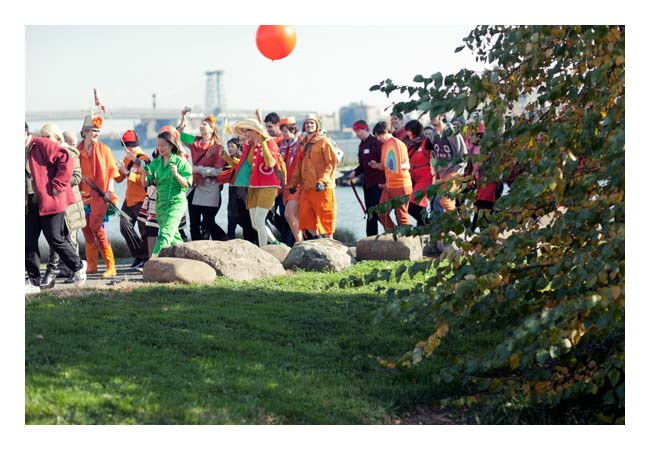 They were closely followed by the orange group, who cheerfully pranced along in various tones of tangerine.

Then it was yellow, who brightened up the parade with their lemons, daffodils, mustards & flaxen loveliness! 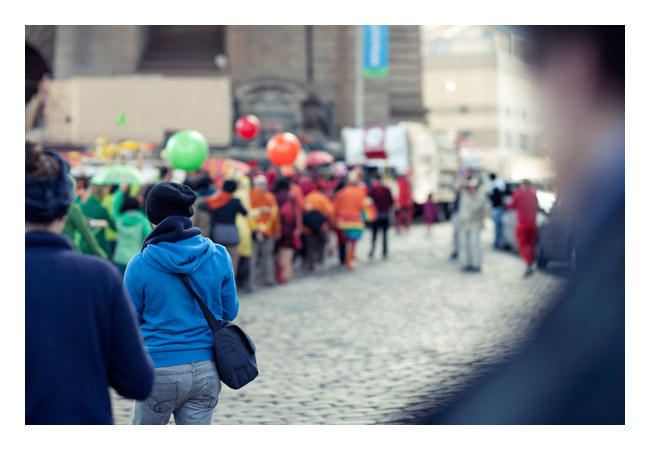 This is the view from where I was marching. In front of me was the group of greenies, who ranged from olive to jade to emerald, lime to aquamarine. I stood behind them with the blues. Our outfits swept from azure to cobalt, sapphire to powder blue; from midnight blue to indigo & robin’s egg hues. 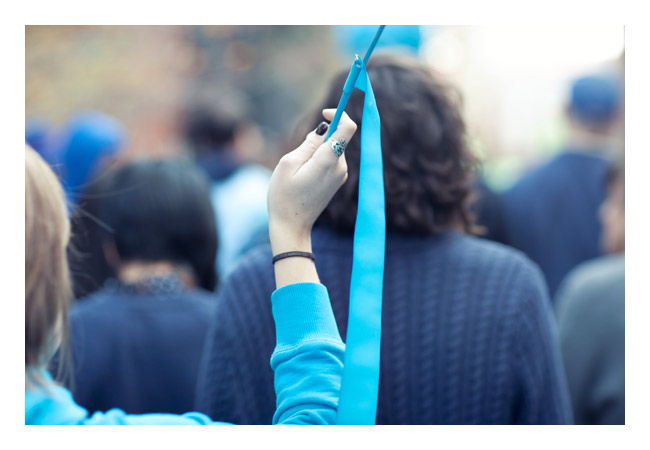 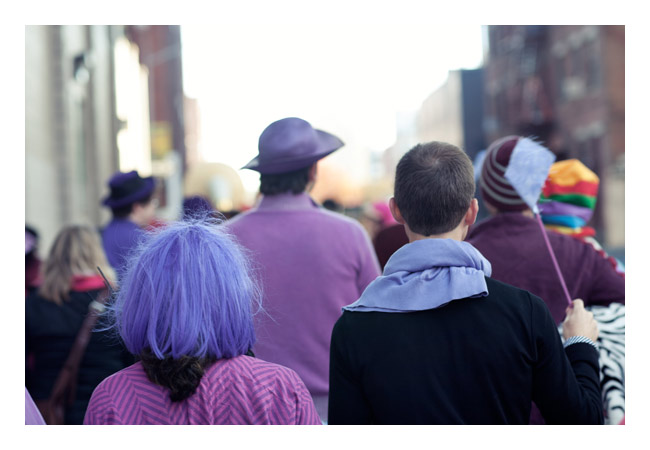 Behind us were the purple & pink groups, who delighted everyone with their fabulous mix of amethyst, heliotrope, lavender, lilac, mauve, violet, magenta, fuchsia, hot & neon pinks.

As we neared Manhattan Bridge, we were all offered sparklers. !!!!!!! You have no idea how happy this made me! The best part is that they weren’t just normal-sized sparklers, they were JUMBO! (Jumbo sparklers in DUMBO!) I have never seen such enormous sparklers in my life! We passed the spark literally back & forth, as everyone in the group helped light one another up. 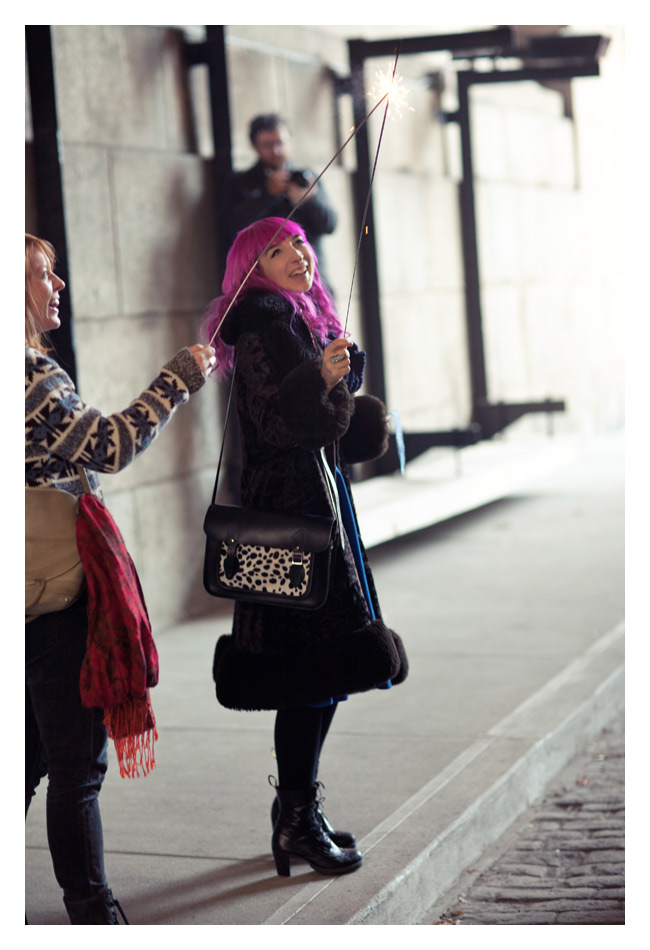 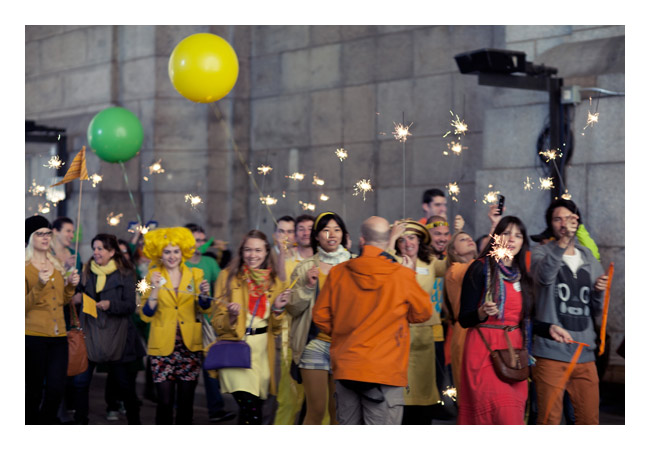 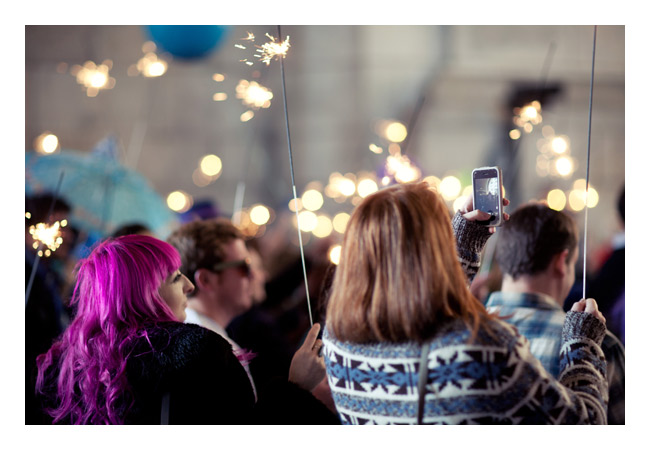 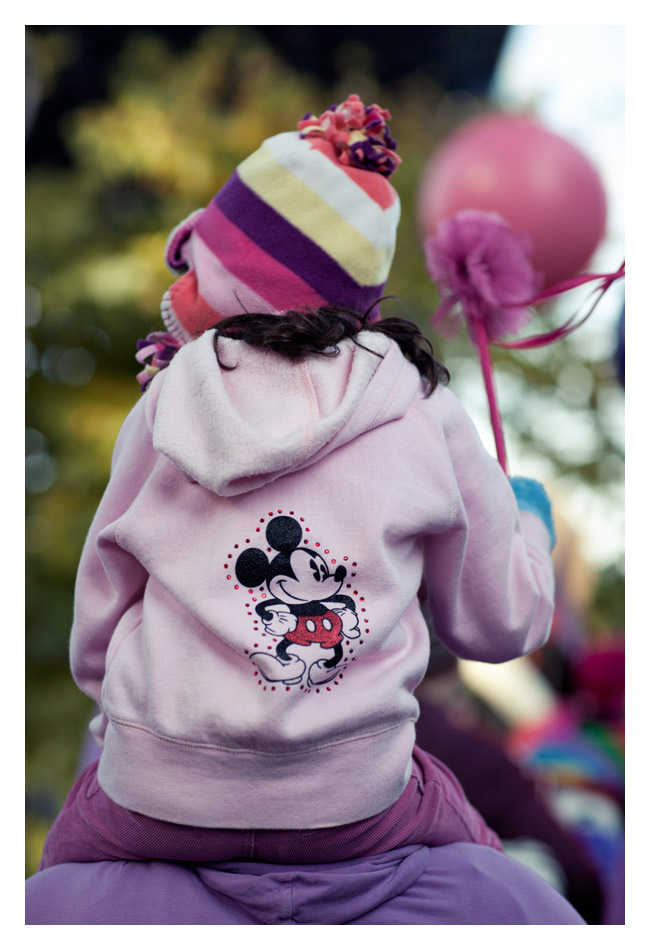 The thing that was most exciting to me about being part of the rainbow parade — other than the colour & the music! — was the total, abject lack of self-consciousness. Seriously, wearing all one colour & dancing around in a line, waving a flag or balloon, & perhaps wearing a wig would make even the bravest person feel a little silly. But there were no exchanged looks of embarrassment or awkwardness; everyone was grinning, laughing, hootin’ & hollerin’. I turned to several strangers & exclaimed, “This is so awesome!”, & I know I wasn’t the only one.

We weren’t marching for any particular reason. There was no purpose, no politics, no real reason for participating in a rainbow parade, except for pure pleasure. It was simply a gathering of joyfulness, a celebration of colour & freedom & the fact that we can do whatever we want!

“There is no becoming, no revolution, no struggle, no path; already you’re the monarch of your own skin — your inviolable freedom waits to be completed only by the love of other monarchs: a politics of dream, urgent as the blueness of sky.” (Hakim Bey) 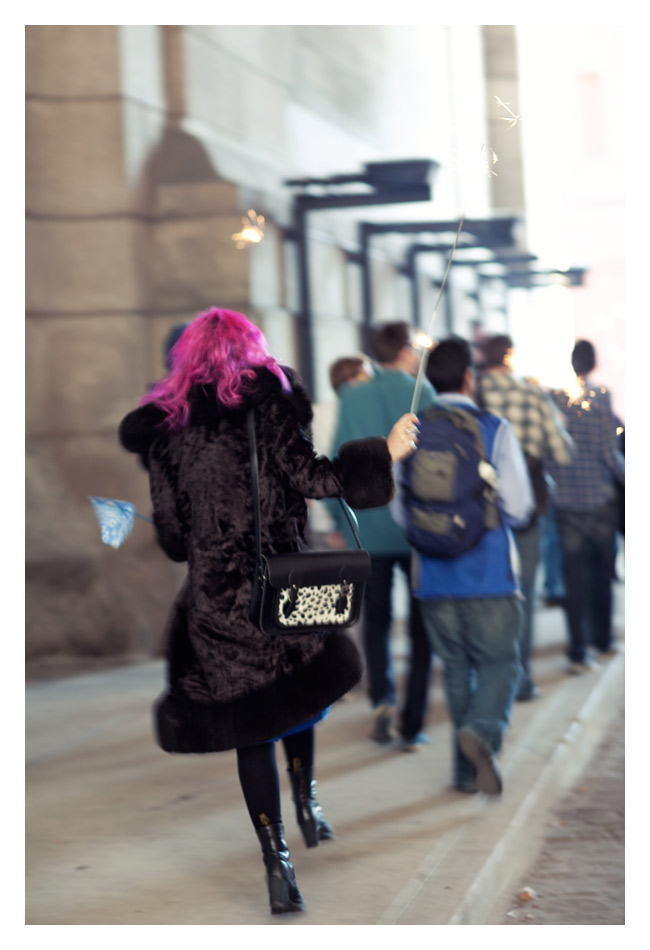 If there’s a Creative Mornings gathering in your neck of the woods, I cannot encourage you to go strongly enough! It’s FREE & it’s totally inspiring. I felt so excited & happy & reinvigorated after my participation in the rainbow parade; it was an incredible way to kick off the weekend!

Even better than that, I think it’s great for the soul (& the brain!) to surround yourself with new & interesting people as regularly as you can. You never know who you’ll meet, what you might learn, or what kind of parade you might become a part of!

« The Twisted Ringmaster!
Carousel: Life Only Sucks If You Do! »