Having Nubby by my side — I’m so happy to have my Virgo soulmate back! She is amazing & I’m so pleased that we get along like we do. Everything is very easy, & well, we understand each other. It’s almost creepy sometimes but mostly I am just really glad to have someone who “gets” me! It’s cool, too, because we know a lot of the same people (though I don’t really know how that happened), & since we’re both in similar work with similar goals, we can pretty much talk about anything & it’s always interesting & entertaining. Our birthday party was amazing, & the last week staying in the makeshift Virgo Boarding House (hee) has been great, too. We have a hilarious red velvet couch routine & have spent many many hours sitting, talking, walking, shopping, plotting & blogging side-by-side. Tomorrow we’re going to Vegas — woo woo! — but on Monday she flies out of my life for another few months. Pout. Does she have to go?!

The Virgo Extravaganza — I know I’ve already written about it, but seriously, it was good, yo! The weather was really warm & even though it looked like it might threaten to rain at any moment, it didn’t. Everyone was so so so cute & lovely, & we were really overwhelmed by how sweet everyone was. Nubby & Star turned up with a bunch of helium balloons which matched my dress perfectly, & there was lots of hugging & excitement as we caught up. (I hadn’t seen Star in two years!) Timmy took a bunch of awesome pictures of the day, & then he, Nubby, Gilda & I piled into the subway clutching our bags, balloons, roses, cakes & other assorted nonsense (!!!) before going to our hotel. We are definitely thinking about renewing our vows every year, & really, the parties are just going to get bigger & better… Maybe we should have next year’s in the Bermuda Triangle?!

The Hotel On Rivington — We decided that we wanted to stay in a cool hotel for the night of our birthday, & after about a billion emails back & forth, we finally decided on the Hotel On Rivington. It was the ideal choice. Our room was great, with floor-to-ceiling windows & an enormous (& I do mean enormous, it was easily a four-person bed) Tempur-Pedic bed. The shower was AWESOME too, set against the outside of the building with a wall made of glass — which meant you could watch the entire East Village as you scrubbed yourself (& uh, they could see you, too). It was my favourite part of the room, I spent a lot of time there. I want a glass shower, ahhh it was so good! Anyway, the hotel was great — the staff were really friendly & helpful, the room was lovely & the location was impeccable. A+++! Would trade again! 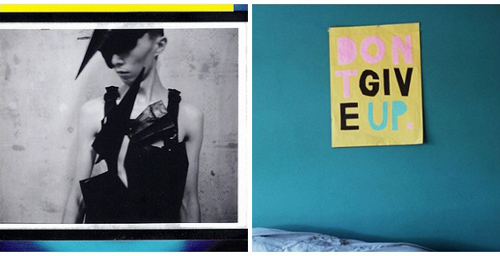 The Garment District — I was in the Garment District last week to go to a Stephen Burrows show (which was amazing — & I was sitting opposite Carol Alt & Jay Alexander!), & when the show (which was brilliant) was over, I crossed the road to go into a trimmings shop. It was amazing. Glittery crystals, sparkly pendants, neon ribbons… It was a magpie’s dream. I spied a bunch of tiaras in a cabinet & told the cute little Chinese lady that it was my birthday & I thought I needed one. She gave me a whole lot to try, & then told me, “That one! I like that one!” Her enthusiasm was totally contagious, & so I bought it. Thank you, cute little Chinese lady. You helped make my birthday even more magical.

Adventures in the Meatpacking District — Last night, after a photoshoot in the middle of the street in the East Village, Nubby & I caught a cab to W. 13th Street to see what we could see. In a whirlwind of colour & madness, we started off on the roof of the Hotel Gansevoort, overpriced drinks in hand. After wishing happy birthday to the friend of an ex-pornstar, we were cornered on the street by a video crew who shone a light at us & asked us questions about our sex life. A few short minutes later, after navigating our way around the cobblestones, an enthusiastic gay guy waved us over & asked if he could take a picture with us. After running in & out of clubs, our feet finally got the better of us & we hobbled home… but not before catching up with the video crew again, & snapping this picture with the host… which I absolutely LOVE. 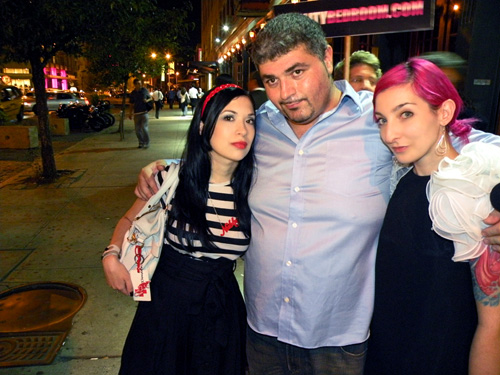 Honourable mentions: The word “fudge-packer” (oh so funny); blowing kisses to bus-drivers; cups of coffee the size of my head; rooftop pools; birthday cake for breakfast; sweet lemon cocktails; When I’m With You by the Legendary Pink Dots (& yes, I am going to their show!); Las Vegas anticipation; naked gymnastics; Michael Jackson’s Twitter!!!; laughing on the subway until I hyperventilate; compliments from friendly strangers; $10 lattes at The Plaza; introducing Nubby to my shoe guy at Bergdorf’s; aloe vera juice; Marie‘s corn outfit (& watching my wife jump on a bed in it); walking the streets of Manhattan in my Betsey Johnson dress & full transvestite make-up; $1000 bills; dreams of Bob Saget; birthday phone-calls from Mike Dooley; dressing up like babushkas in H&M gourmet marshmallows; super-long Virgo to-do lists; foot rubs; Nubby’s accent (way too cute); my birthday twin Molly Crabapple!; considering the iCiNG national tour (oh yeahhhh); talking about New York plumbing in Starbucks; “I feel like a corpse.” “You feel like a reptile!” “You feel like a vampire!”; lizard people in general; plotting to club intruders with an obese person’s prosthetic leg (Nubby says, “I would totally do it, it’s like a baseball bat. You can’t throw any of this other stuff!”); picture-perfect suburban America; cute curled-up snuggle-sleep; writing on the porch swing!

“One day it will have to be officially admitted that what we have christened reality is an even greater illusion than the world of dreams.” — Salvador Dali

What are you adoring this week?