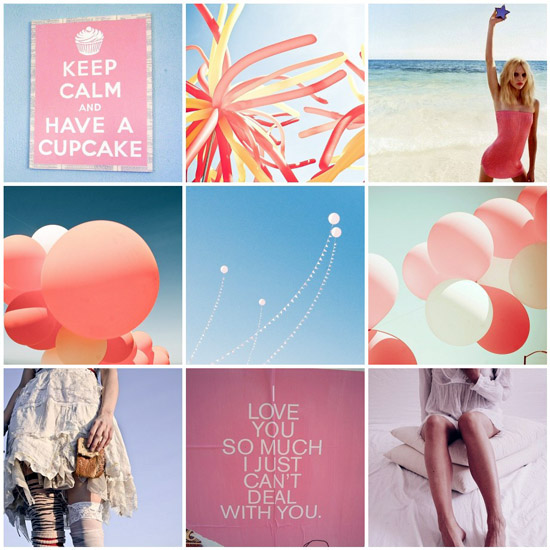 Yoga — Aw man, I had forgotten how good it feels to do a yoga session! Deep breathing, slow stretching, feeling the sensations & being in the moment is one of the most magnificent things. I always forget how great it feels, & I feel like I should write myself a big reminder somewhere! Just scrawl it on the wall: “Do yoga!” Like, oh yeah! That!

Unicorns — New obsession. Honestly. That holographic Christmas decoration launched something bigger than me! Ever since I bought it, unicorns keep popping up in my life. Everywhere. They’re mentioned in videos I watch on Youtube, in random conversations & in photographs of people I’ve never met. It’s been like unicornmania in the Galaverse! The weirdest thing is that I have never felt any affinity for them whatsoever, especially because I was never a “horsey girl” (I have written about this before), but now I am all over them. & thinking about getting one tattooed on me. Oh yes.

These two pictures which made me smile really widely yesterday.

Fixing my website — It was such a mess yesterday, & I was so freaked out about it! But then this morning, I woke up, & I pottered around, & I fixed it with my own two hands. Figured it out on my own. I cannot tell you the amount of pride I felt! & the relief! I quote from my own Twitter account: The relief is so sweet, it tastes like… lime marmalade spread thinly on someone delicious.

Writing late at night when the house is quiet & I am the only person awake, the black chandelier above me (yes, really!) the only light. Honestly, you should see me sitting here, headphones on, dancing to Missy Elliott in my chair, taking breaks from typing to mouth words & wave my hands around like a lunatic. It is a good time! 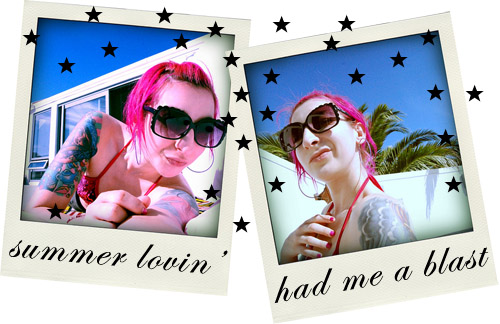 Lying in the sun in a pink sequinned bikini, with a hat over my face, guzzling water & listening to Prince, The Roots & A Tribe Called Quest.

More magic all the time & making a commitment to it.

Honourable mentions: Gibsonton, Florida; dichotomies (an hour of yoga followed by an episode of Jackass); boys who give good phone; persuading people to sign up for Twitter; making bracelets & giving them all individual meanings; Doomtree; using the pen from the Las Vegas hotel I shared with Nubby to write “to do” lists; serendipitous super-sleuthing; looking at other people’s Twitter favourites!; Chopped ‘n’ Skrewed; my new necklace from Trashy Deluxe!!!; being called “BatGala”; researching unicorns; “I hope you’re not offended by this, but I think yo’ ass is fine as shit” (so funny, totally needs to be looped & made into a ringtone); sympathy soy hot chocolates made by Mama Darling; having my own chapter in a bright pink book (cover, pages 1 & 2, pages 3 & 4 — & you can buy your own copy here!); people on the bus who do BACKFLIPS DOWN THE STREET when they disembark!; packages of toffee which arrive in the mail; being called a “dirty awesome slapper” (usually not such a compliment but in context, it was excellent); sexy zombie pants; my new bracelet from Gem (thank YOU!); obsessing over this old photo; saying “bwahhhh!” (sometimes it is all that feels appropriate); iGala!!!; B.O.B. by Outkast (an oldie but a goodie); old photos in general (aw, sheesh).

“Throw your dreams into space like a kite, & you do not know what it will bring back, a new life, a new friend, a new love, a new country.” — Anais Nin

How about you, beautiful? I have my fingers crossed that something insanely delicious & juicy happened to you this week!

« How To Avoid Regressing When You Stay With Your Parents (Alternate Title: How To Survive A Family Christmas)
iCiNG Days Of Christmas: Nubby Twiglet! »