Television & movies are overrun with underdressed & badly-styled characters. But what about when the major studios get it right? This is my little homage to who I think are the 5 most stylish female characters. 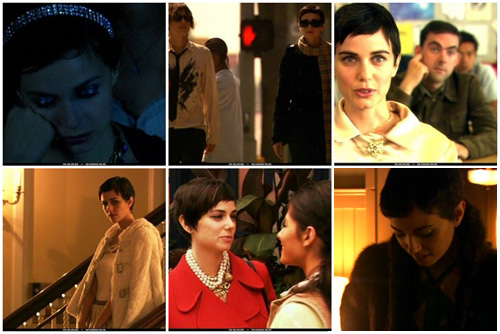 “Often, what you see with Jenny is not pretty. She’s in love with two people at the same time. She’s one of those people who will just grab experiences because of the holes inside her, and with that, she will leave the casualties in the wake behind her.”

Jenny Schecter is played by Mia Kirshner on The L Word, a television series that revolves around the lifes of a group of lesbian & bisexual women living in Los Angeles. While the character of Jenny was voted “Most Hated” on the show, you can’t deny that the girl can dress. With a penchant for mod dresses, vintage fur coats & sparkly accessories, she plays the part of the tortured artist beautifully.

What we can learn from Jenny’s style:
Jenny isn’t afraid to portray different sides of her personality through what she wears. As a writer, she is always playing with characters & expression, & this continues through to her wardrobe. Jenny shows us that you don’t have to stick to one style, you can feel free to experiment & be different people if you want to. Some days you might want to be slick, while others you want to be feminine or just plain decadent — & that’s okay. In fact, it’s to be encouraged. Keep ’em guessing! 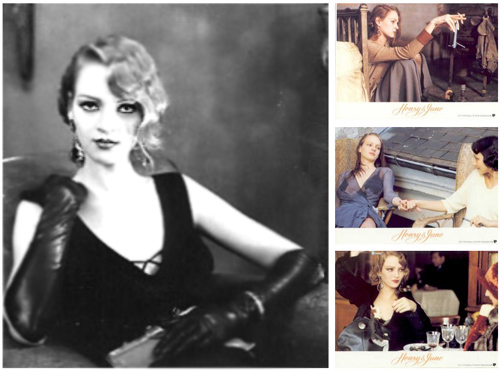 While June is not entirely fictional, what I’m actually referring to is her part as played by Uma Thurman in the vastly underrated film Henry & June — an adaptation of the book of same name by Anais Nin. June was married to Henry Miller, but also involved in lesbian relationships with artist Jean Kronski & later, Anais Nin (who had an affair with Henry too).

Uma’s character was dressed by Yvonne Sassinot de Nesle, & in the film, it’s not so much what she wears but how she wears it that really makes her come alive. Her clothing is an exquisite extension of her personality; it serves to make her a richer & more dynamic character. Her trappings are like a marinade that help to bring out her subtle flavours.

What we can learn from June’s style:
Your clothing can help cultivate a mood — so don’t be afraid to be dramatic! Dress to suit your personality: pull the best parts of yourself out & extend them through coats, skirts & accessories. It is much more mysterious to cover up than to show it all off. Integrate your clothing into your lifestyle — use it to seduce or confuse or bewilder people. Be unashamedly yourself.

Not safe for work! A bit raunchy. 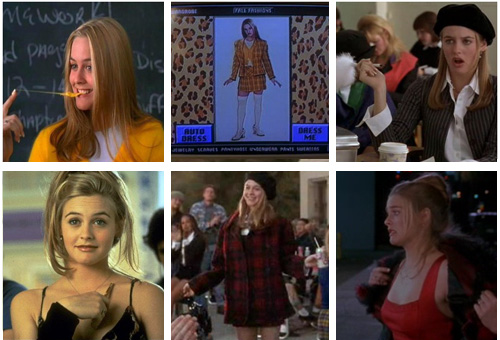 “Do you know what time it is?!””A watch doesn’t really go with this outfit, Daddy!”

Cher Horowitz was played by Alicia Silverstone in what is arguably the best teen movie of all time: Clueless. Written by Amy Heckerling, it follows Cher’s transformation from a shallow & selfish girl into one who is, well, a little more mature & well-rounded. Really though, the reason people love Clueless is that the characters are so easy to relate to, the lines are really snappy & it is pretty much the ultimate feel-good movie.

Plus, I have eternal love for anyone who says something like this…

“So okay, I don’t want to be a traitor to my generation & all but I don’t get how guys dress today. I mean, come on, it looks like they just fell out of bed & put on some baggy pants & take their greasy hair — eww — & cover it up with a backwards cap & like, we’re expected to swoon? I don’t think so!”

What she wears:
Cher is a teenager, & she dresses accordingly. She loves miniskirts & short dresses, knee-high socks, cute hats & bags that match her ensemble. Cher is an accessory maniac & thinks way outside the box — in one scene she tote a marabou-topped pen which goes perfectly with what she’s wearing. In another, she snaps yellow bubble gum, which is the exact shade of the rest of her clothing. She doesn’t do “casual” & always looks immaculate.

What we can learn from Cher’s style:
Play with proportion — knee socks worn with miniskirts & long shirts looks brilliant & attracts the eye. Don’t be afraid to match; it’s easy & looks fantastic. (I think all that “don’t be too matchy-matchy” hype has really skewed & confused people’s style.) Healthy hair is one of the best accessories, & faux fur never goes out of style. Though I would stop at matching my bubble gum to my outfit… 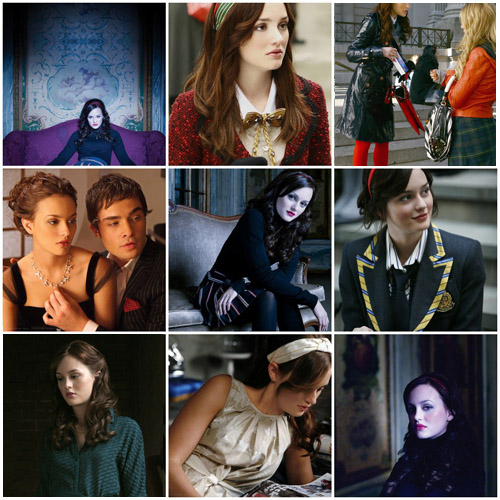 Serena: “How’s your mom doing with the divorce?”
Blair: “Great. So my dad left her for another man… she lost fifteen pounds & got an eye-lift. It’s been good for her.”

Portrayed by Leighton Meester in the show Gossip Girl, Blair is the ultimate preppy icon. While outward appearances secure her place as an upper-class darling, behind that she rules her fellow classmates with an iron fist. She is a girl that you just don’t cross, because she has the power & ability to stomp you into oblivion. She is also painfully well-dressed.

What she wears:
Blair maintains her conservative persona by not letting a lot of skin show — except for when she’s performing a striptease, of course. I think I am yet to see Blair in trousers — she only ever wears skirt or dresses. She is a fan of high-necked garments, elegant detailing, cherry red lips & high heels. She is the Cher Horowitz of the new generation: she loves to match, wear new trends (turban, anyone?) & rock perfection like no other.

What we can learn from Blair’s style:
Dressing in a preppy, sophisticated way doesn’t have to be boring. Use unexpected pops of colour, unusual textures & fabulous accessories to freshen your ensemble. Headbands are always appropriate, & nude lips are sinful. Wear fantastic nightwear. Don’t dress to be sexy, dress to be stylish. 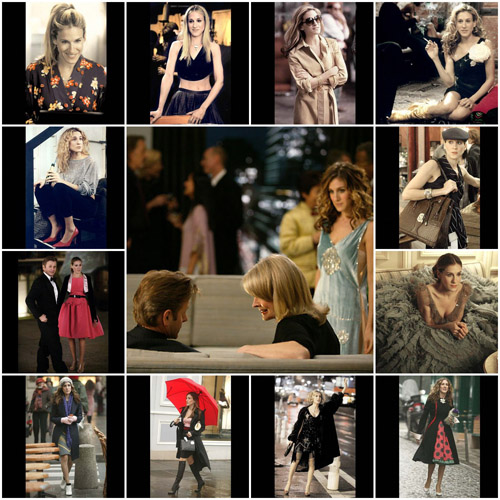 Carrie is the quintessential style icon for anyone who refuses to be pigeon-holed into a “look”. Her style is ever-changing, evolving, & she expresses herself through what she wears. While some of her looks could be labelled feminine, retro, sleek or street chic, she defies categorisation. A true fashion lover, she is known for saying “shopping is my cardio” & spending $40,000 on shoes.

She was dressed by Patricia Field & Rebecca Weinberg in what I think was one of the great feats of styling. Sex & The City was the kind of show that people would watch just for the clothes, even if they disliked the characters. While a lot of what Carrie wore was way out there, I also like to think that she inspired a new group of women to start dressing up more, & to have fun with their clothes — not to view them as just a necessary evil.

What she wears:
I think “what doesn’t she wear?” is perhaps a better question! She rocks blonde & brunette, with her hair worn wavy, straight, in twin buns or tucked under a hat. She loves high heels, vintage shopping & Oscar de la Renta. She teams a Birkin with a waistcoat, purple with grey & a pop of lime green, high heels with tracksuit pants, a basketball singlet with a straw fedora. She wears a black pleather one-shouldered dress with a huge white flower pinned to it. She dons a Halston trenchcoat with great Jackie O sunglasses. She rocks an oversized white men’s business shirt & belts it around the middle. She wears knee-high argyle socks & high heels. In Los Angeles, she even wears two different coloured shoes…

What we can learn from Carrie’s style:
There are no mistakes, only learning opportunities. As we change, we should allow our wardrobes to evolve with the same ease & grace that we allow ourselves. Keep everything that fits & flatters you, because you’ll never know when you might find something that goes with it perfectly. Dress appropriately but do it with a point of difference. Don’t be afraid of hats, huge earrings, strange bags or vintage shopping — all it takes is a little confidence.

« 50 Ways To Rescue The Worst Day Ever
Rosewater »