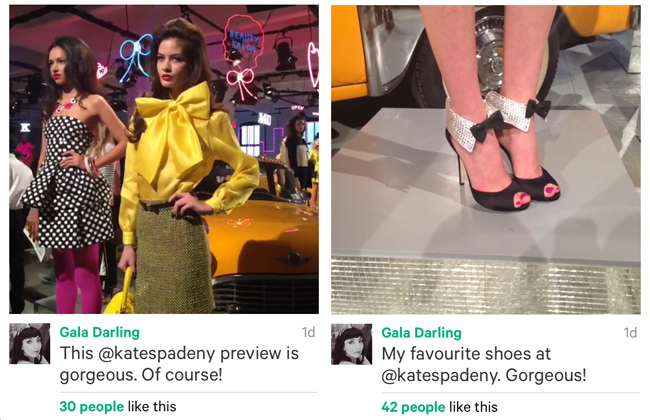 When it comes to Vine, there are three questions that need to be asked.

First things first: do you know what it is? If not, it’s an iPhone app which enables you to film up to six seconds of video which loops. The videos end up looking like those thumbnails above… Except they move.

If you have an iPhone & you don’t have this app yet, well, what are you waiting for?!

The second question is, are you following me?! My username is galadarling, of course. My stream is very silly, featuring Shauna rolling her r’s in David Bowie’s bedroom, Kat chugging entire glasses of wine in Paris, & more public dancing than you can shake a stick at!

But perhaps the most important question is, are you as obsessed with it as I am?! Ever since downloading the app when I was in London, I’ve been tinkering with it, thinking about new ways to use it & what the medium is best for.

Sure: it’s great for filming your amateur ballroom dancing skills in Paris in the middle of winter…

But it’s also brilliant for sharing experiences & showing highlights. For example, on Friday I made these Vines at the Kate Spade presentation…

From making these videos, I started to realise the infinitely cool ways Vine can be used. Here are a few things I’ve learned…

1. Vine is not long-form Instagram. It’s a completely different medium, so think about using it in innovative ways.

There’s only so much you can show in a picture; with Vine, you can see different angles & details with ease. It’s not just about keeping your focus on one thing for six seconds, it’s about revealing more than you can with a photograph.

Think about the kinds of things that lend themselves to multiple shots. Once you get the gears turning, I know you’ll come up with more ideas than you know what to do with!

2. Download VineGifR. It’s a Mac app which allows you to turn your Vines into animated gifs. VineGifR is brand spanking new, & as such, it’s not perfect: the gifs it produces are only 200 pixels wide — as you see above — & are a minimum of 2mb per file. But it’s a great way to share your Vines on your blog.

The other way of sharing, which is to embed them, is not something I’d recommend, simply because they autoplay with the volume on. Firstly, websites that make sound are annoying & extremely 2002. Don’t go there! Secondly, if you embed more than one Vine, your website will sound like a mad cacophony, & there’s no faster way to get your reader to close the tab!

3. Follow people who are experimenting with it. By the way, this doesn’t mean “blatantly steal & rip off people’s ideas” because that’s never cool, but there is nothing wrong with being influenced (or awed!) by something someone else has done!

Over the weekend, I went through & followed a whole bunch of people from different arenas — blogging, fashion, technology, design — just because I’m curious to see what they make of the medium. Once you follow me (wink wink, nudge nudge!), you can look through my list & add a whole lot of them.

4. Stick with it. There’s a bit of a learning curve, & yes, the app is a bit buggy right now. But the more you practice, the better you’ll get at it.

Don’t feel obliged to post everything you film! It might take a few tries to get your Vine right. Here’s a tip: once you film it & click Next, the Vine will be saved to your phone’s Photos, so if you need to review it, you can.

Also, if you want to share your Vine with Twitter or Facebook, be sure to slide those dialog boxes over to “On”! Once your Vine has been posted, there’s no way of sharing it out to your social networks. Hopefully this feature is coming soon!

Spoiler alert: you don’t have to be on every single social network. Just use the ones that you enjoy, & that make sense! Don’t spread yourself so thin that keeping up with your social media becomes a chore. Keep it fun & lighthearted.

Personally, I’m really enjoying having a new tool at my disposal to experiment & play with. I feel like I’m slowly beginning to get the hang of it, & it’s exciting to see the innovative & creative ways that other people are using it, too!

See you on Vine!

This is one of my (many) life philosophies 🥰 It

Should you stay or should you go? Here's my take..

I had to use this audio of @courtneylove to showca

Is it too much to ask for a romcom?! 😩 Cheer up